A conflict of interest

It’s hard to know where Team Sky ends and where British Cycling and its Olympic aspirations begin. An article over at velonews.com, in turn taking up an article in the British newspaper The Guardian, suggests it’s something that now concerns the British government (and I’ve got memories of London’s Cycling Weekly raising similar concerns earlier this year too).

Here’s an excerpt from an interview with Peter Keen, “director of performance” at UK Sport, an agency of the British government charged with overseeing the distribution of state funding across the sports sector:

Is Keen concerned that Dave Brailsford, his successor as the performance director of British Cycling, may have allowed his Olympic focus to be diverted by the Tour de France? “The stakes are higher, for sure,” Keen eventually says. “It’s not a cash issue because Sky is the sponsor. But it’s about people and their ability to work across another dimension. I think Dave would concede that it’s an experiment.”

And, logically, a dilution of Brailsford’s once searing concentration on Olympic cycling? “Um,” Keen hesitates, “yes, there is. But there’s a counter-argument that the very talented and driven people there need new challenges to refresh them and the Tour provides that. But it is a big risk. Dave knows I wouldn’t have done the same thing. I’m a more conservative planner than Dave. He’s well aware of the risks and my views on it. Time will tell.”

A bit of googling reveals Peter Keen is also an “executive director” at British Cycling. He’s not naive and the translation of what he’s saying is that he thinks Brailsford needs to decide which hat to wear, which job to fulfil: either he’s part of British Cycling or he’s part of Team Sky. Doing both is a “big risk”. That’s polite talk for “make your mind up matey”.

If Britain doesn’t get a haul of medals in the London games then you don’t need to be Machiavelli to work out that fingers will be pointed at Brailsford touring Europe to promote Rupert Murdoch’s empire instead of focussing on velodrome gold. 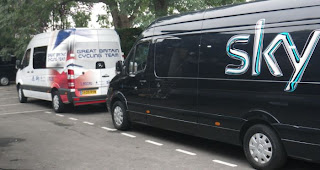 Brailsford’s in the driving seat… but which one?

What I find more interesting is that the borderline between Team Sky and British Cycling is quite fuzzy. Here’s The Guardian again:

Team Sky and the Olympic cycling squad are both headed by Dave Brailsford, who is performance director at British Cycling and principal of Team Sky. Shane Sutton, head coach of the track cycling team, has the same role with Team Sky. Other Olympic coaches listed on the Team Sky website are the Olympic team psychiatrist and senior manager, Dr Steve Peters, as “head of medical”; the track endurance coach Dan Hunt (race coach); and the academy head Max Sciandri (sport director/coach).

I can’t think of any other teams in the sport where half the staff have roles in two camps at the same time. It’s a bit removed from the slick corporate image that Team Sky presents. We discover that Team Sky management are effectively, thanks to official roles with a national squad, a bunch of part-timers.

At best it means people have to juggle two jobs at the same time, at worst it’s a massive conflict of interest: balancing the interests of the state-funded British Cycling team against the commercial promotion of Sky, Newscorp and the other sponsors behind Team Sky. Are the staff on two salaries? Who protects the taxpayer’s money?

It’s not just this petty blogger who thinks this set-up raises concerns. UK Sport has asked Big Four auditors from Deloitte to investigate.

I can’t think of another ProTour team that has this conflict of interest, except for Astana where the team patron Daniel Akhmetov is chair of the Kazakh cycling body and also Supreme General of the Army (as well as a former Prime Minister). Shouldn’t the British expect slightly higher standards of governance than comparisons with Kazakhstan?

EDIT: 17.04 – it seems Deloitte have a mild conflict since they sponsor BC events and the GB paralympic cycling squad. More a mild tangle than a web but it’s not ideal. Thanks to Twitter’s CraigHardie for pointing this out to me.