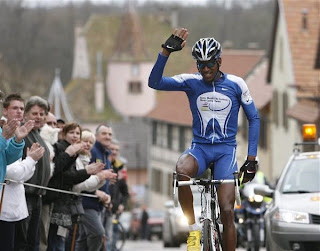 I twittered the other day about Eritrean rider Daniel Teklehaimanot possibly joining the Cervélo Test Team and since then, a second source has independently hinted at the same thing although he says it’s at the “possibility” stage rather than contract time.

You might not of heard of him but he’s 21 and finished sixth in the Tour de l’Avenir last year, alongside the likes of Romain Sicard, Teejay van Garderen, Pete Stetina and Rafael Valls Ferri. A heart scare caused a few problems but he’s back after surgery with the UCI’s World Cycling Centre team.

Now there are many young riders who deliver these results but I have to confess it’s more exciting to see a rider from Eritrea knock on the door of a pro team rather than the usual collection of French, Belgian or Italian espoirs. Note that he won’t be the first African to ride in the pro ranks, Tunisia’s Rafaâ Chtioui finished Paris-Roubaix this year with Acqua e Sapone and of course South Africa’s Robbie Hunter became the first African to win a stage of the Tour de France in 2007.

Whether he joins Cervélo or any other team remains to be seen but his story alone is worth a lot of publicity to any team who recruits him.