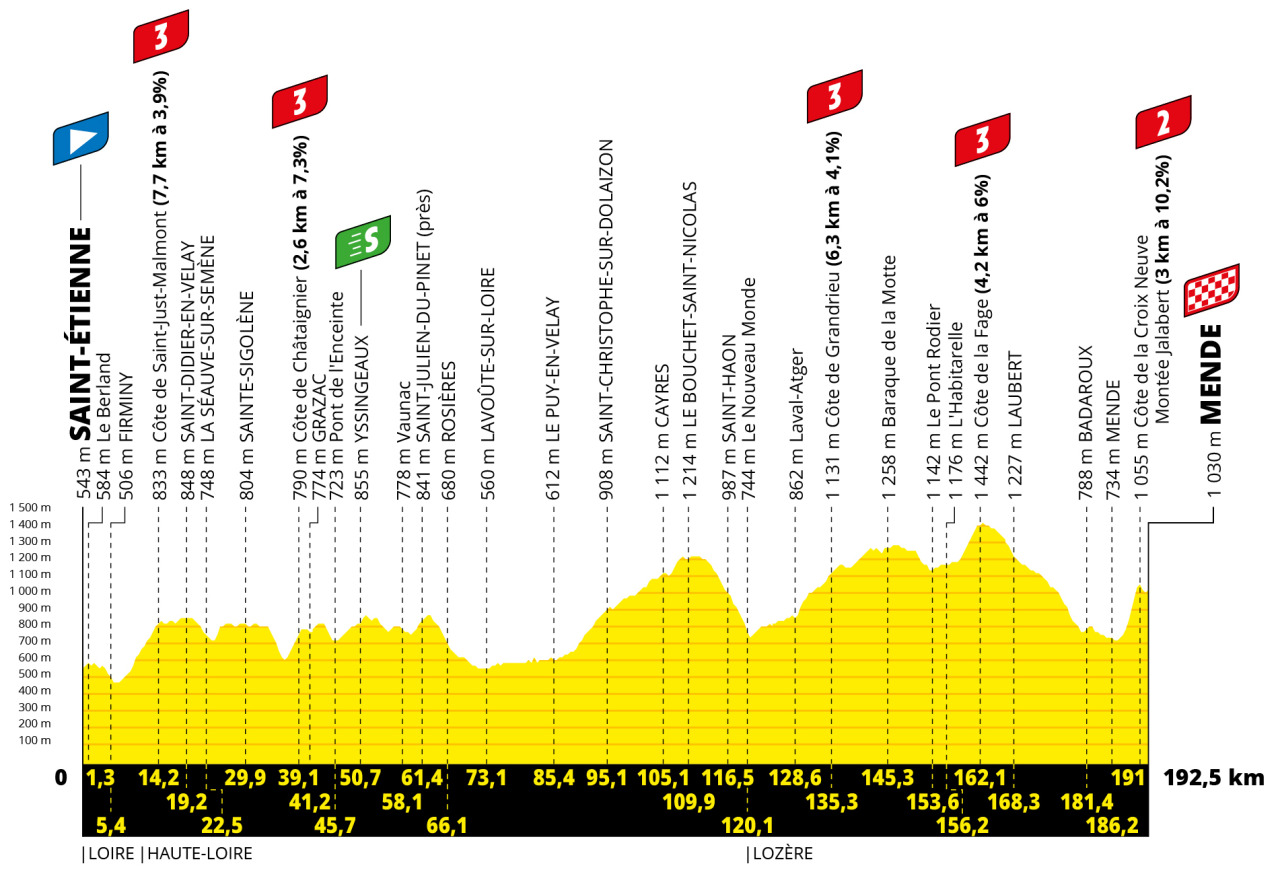 A day in the massif central to Mende that’s almost a mountain stage. 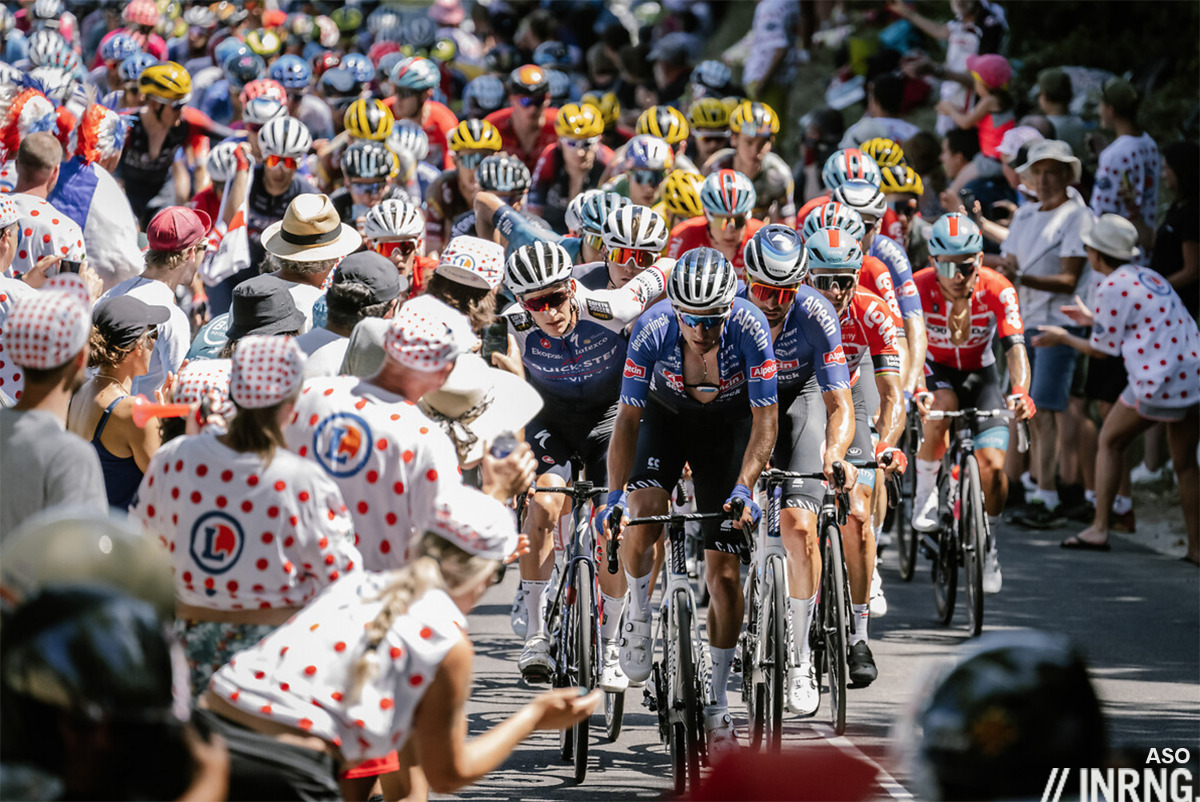 Great Dane: the breakaway won. The sprinters teams did their best to control things but Fabio Jakobsen was being dropped on the climbs and so Quick-Step stepped down, Caleb Ewan crashed so Lotto-Soudal’s lot was done.

BikeExchange were confusing in the Dauphiné, working for Groenewegen on stages that were surely, and later inevitably, too hard; then not pulling on days when he had a chance. They took up the chase in the final 40km but didn’t have enough riders, other teams didn’t join in and so the breakaway was clear.

Mads Pedersen attacked the breakaway hard, only Hugo Houle and Fred Wright could get across. The Dane was the obvious pick to win but that was his weakness. Wright tried an attack while Houle looked to be betting it all on the sprint, perhaps hoping Pedersen launched too soon. He did start his sprint early at about 300m but kept going. After missing out on the stages in Denmark and Northern France, he took a hillier stage and one that adds plenty to his palmarès and range as until now he’d been someone you’d back to win a classic on a cold day. It was a hard day, many post-stage interviews had riders saying how tiring it was from the chase all stage. 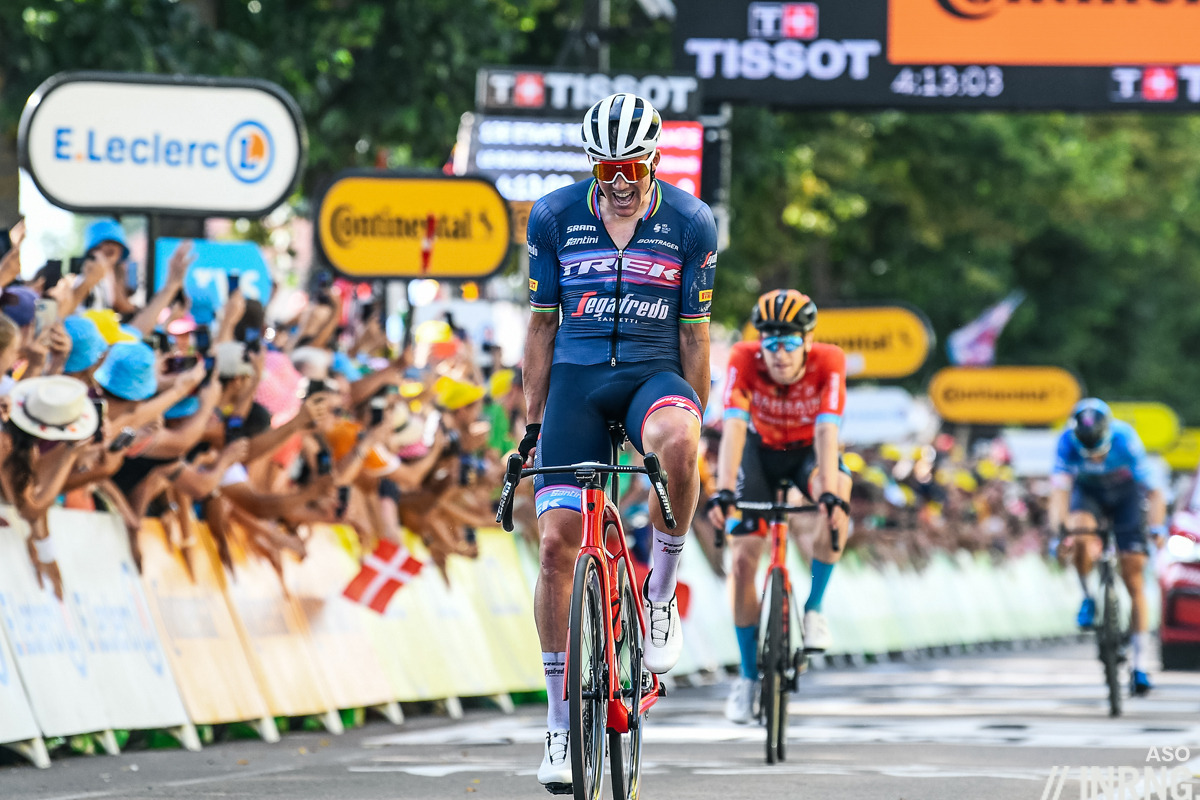 The Route: 192km across the Massif Central and with 3,500m of vertical gain, a mountain stage of sorts. After a quick valley road, it’s uphill out of Firminy on big wide road, it’s well-engineered, the kind trucks use to cross the region and so a launchpad for those with big ring brute force.

It’s then across a series of rural roads, none of the climbs is hard by itself, it’s the accumulation and also all the sections in between on exposed rural roads with the sun beating down.

If there’s a heavyset rider left in the breakaway, or just someone who fears they’ll lack enough punch for the climb, then the long descent after the “Côte de la Fage”, the Col de la Pierre Plantée in reality, is probably the last place to make a move. A big route nationale that descends to Mende and where a few determined riders can work together and try to build a lead to defend. 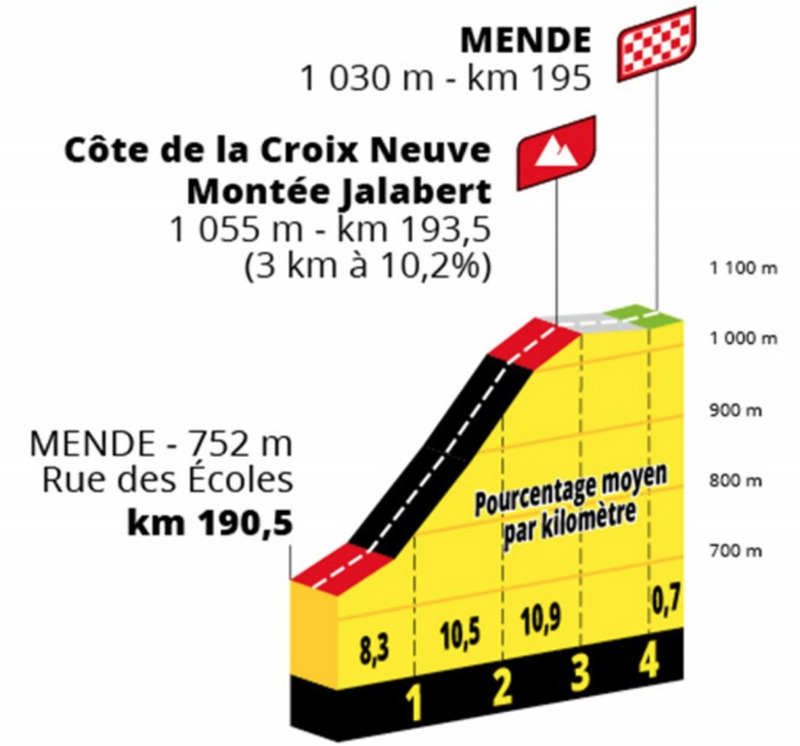 The Finish: the profile doesn’t do it justice. 3km at 10.2% doesn’t sound too bad but the second kilometre is more like 12-14% and it’s an eight minute effort for the best. What it makes it so much harder is that because it’s so steep it’s hard to make up for lost ground so all the big teams will be going elbow-to-elbow to place their leader into place. The race won’t be decided here but time gaps can appear. Once over the top there’s 1.6km to go before the flat finish line on the runway of Mende airport. 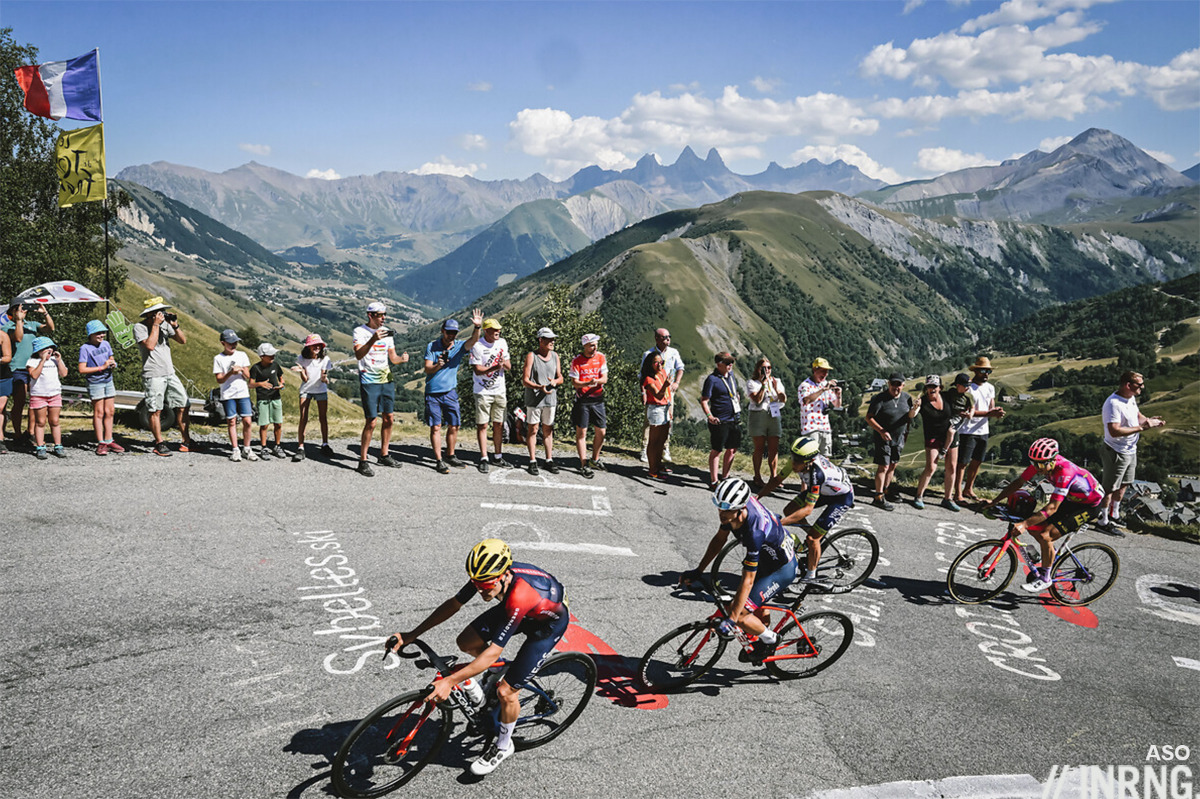 The Contenders: normally it’s a breakaway day and could be one of those days when the break can take 15 minutes once it’s gone clear as everyone else wants a breather. So who can cope with the final climb?

Tom Pidcock (Ineos) has a good chance on an uphill finish but could be drained from his stage win. Neilson Powless (EF Education) is going well too but will be tired as well.

Carlos Verona (Movistar) has a chance today. Normally Max Schachmann (Bora-hansgrohe) would be a great pick but his form seems more discreet, Lennard Kämna is going well. Likewise Dylan Teuns (Bahrain). Bob Jungels (Ag2r Citroën) however has shown he’s going well. Michael Woods (Israel) should like a finish like this but he could still be sore after his crash and while some have the knack of sniffing the winning break, this isn’t is forte, team mate Jakob Fuglsang has had a quiet race despite his Tour de Suisse form.

Valentin Madouas (Groupama-FDJ) is riding well but could be better for tomorrow’s course. Team mate Thibaut Pinot  got mugged in Mende in 2018 and won’t really be out for revenge, instead he’s taking pleasure these days in making the crowd cheer and a Saturday stage in the mountains is his thing, although he wouldn’t chose the heat and would prefer a longer climb.

Bauke Mollema (Trek-Segafredo) but how to win, he’d probably have to punch clear before the descent to Mende and build up a cushion.

Pierre Latour (TotalEnergies) is good on a mountainous course and today’s descending is not so hard, except the section from Le Bouchet-Saint-Nicolas, but his phobia makes him a harder pick.

The GC contenders have a chance if the breakaway is too weak or, outside probability, a team lays down an ambush mid-stage and the race resembles a poked wasps’ nest. If no move can stick then Tadej Pogačar (UAE) is a safe pick if he can reach the finish even if his team is depleted because he keeps sprinting.

Weather: 33°C and a light tailwind for much of the stage. A breeze can be pleasant but when it’s hot it can be miserable as it cuts down the ventilation.

TV: the start is at 12.15pm CEST and finish is forecast for 5.25pm CEST. This should be one of those stages where it pays to tune at the start and then come back for the finish, the battle to get in the breakaway could be furious but once this finally goes, things should calm down. 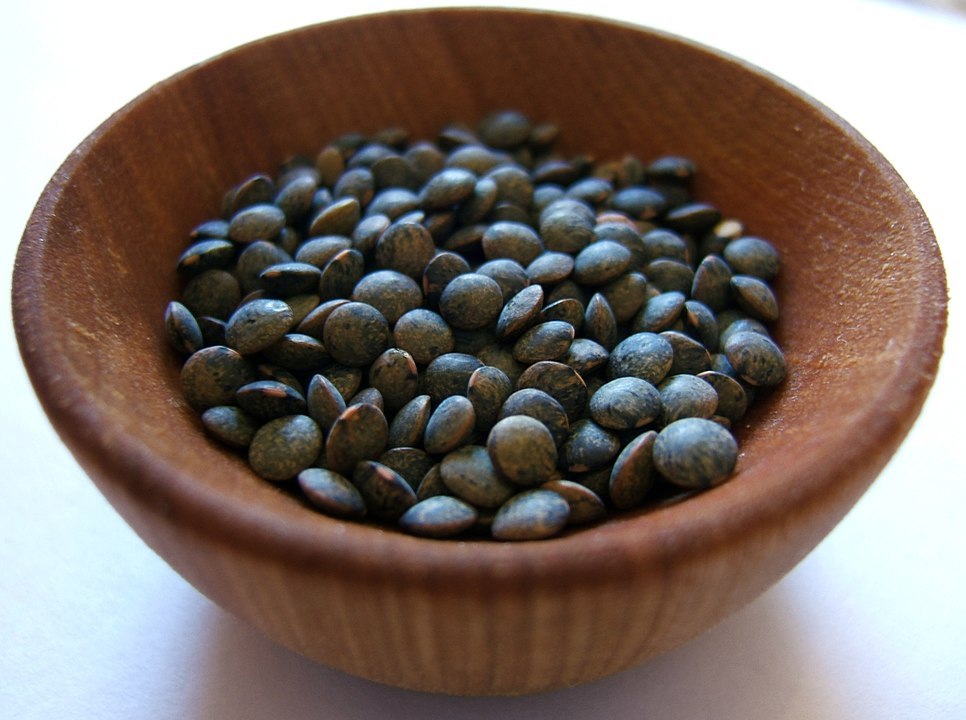 Food and drink: staying away from cheese and wine and a second vegan option in a row as the race visits Le Puy which is famous for its lentils, they’re a dark green type (photo from Flickr’s Jessica Spengler). Now these legumesare a staple in many part of the world because they’re easy to grow in harsh conditions. But for Le Puy it’s a gourmet dish, it has the AOC label. The volcanic soils of the area are supposed to add extra iron – handy for vegan/vegetarian cyclists – plus some taste. They hold up when cooked, there’s a bite to them when other lentils are soft.