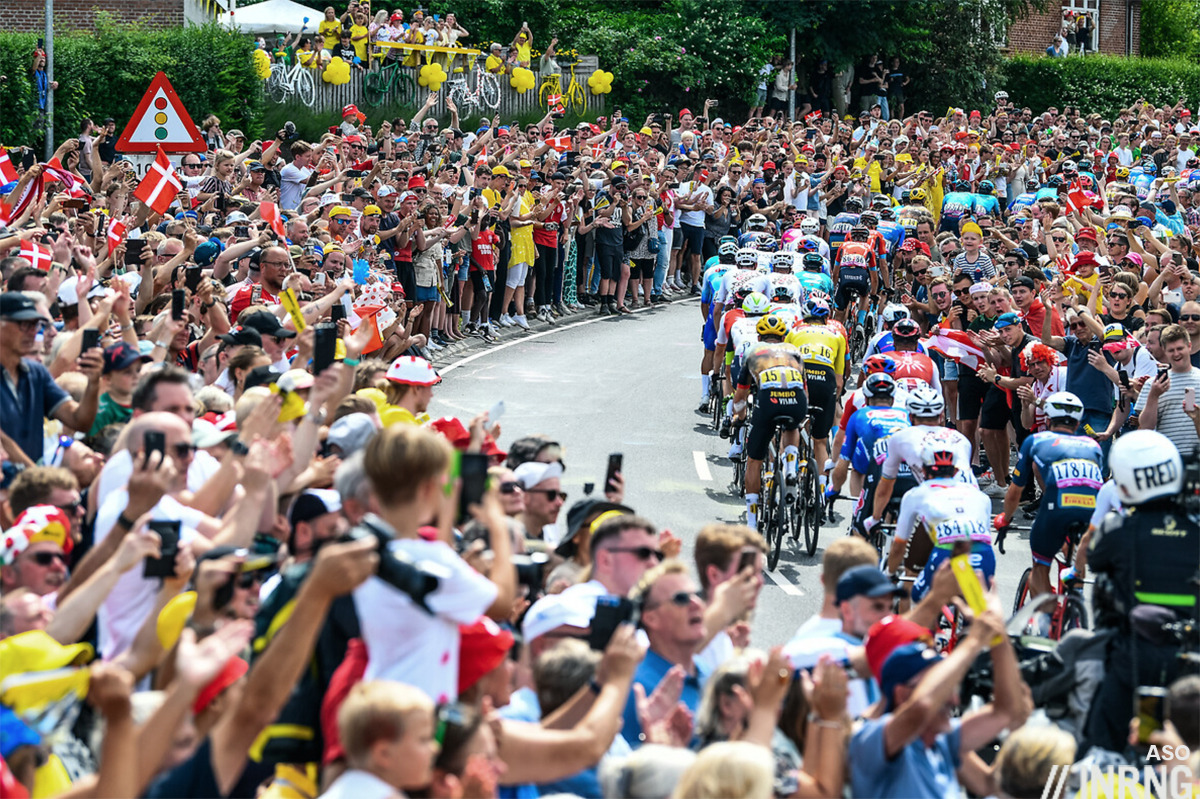 No sooner has the Tour de France started, there’s a break today so that the caravan can make the 900km journey from Denmark to Northern France. There’s still racing on TV and a few more things to chew over…

Plane trouble
Air transport delays are all the rage this summer and the Tour wasn’t immune. The journey to Northern France wasn’t without a hitch last night when one the aircraft booked for the transfer from Sønderborg to France had a “mechanical”, to borrow the cycling term. Passengers had to wait to be rebooked onto other flights in the evening. The riders got priority, reports L’Equipe, leaving ASO staff waiting late for their flight, a reversal that might not have happened several years ago before social media. It’s not new for a plane to have problems, in 1989 the Tour chartered two DC-10 aircraft for a transfer between Lille and Dinard and one of them broke down on the runway making the transfer very late for half the peloton.

Who’s the fastest?
Two sprints in and it’s early but there’s no hierarchy. Jakobsen looked the best on Stage 2 but lost his leadout train on Sunday where Dylan Groenewegen won. But Jasper Philipsen was very fast yesterday, although he was starting from too far back, so he can win one soon. Caleb Ewan can’t get a look in yet but isn’t done for just as long as he doesn’t feel he has to risk everything. Tomorrow’s stage can suit the fastmen but otherwise the next pure sprint stage is on the other side of the Alps. 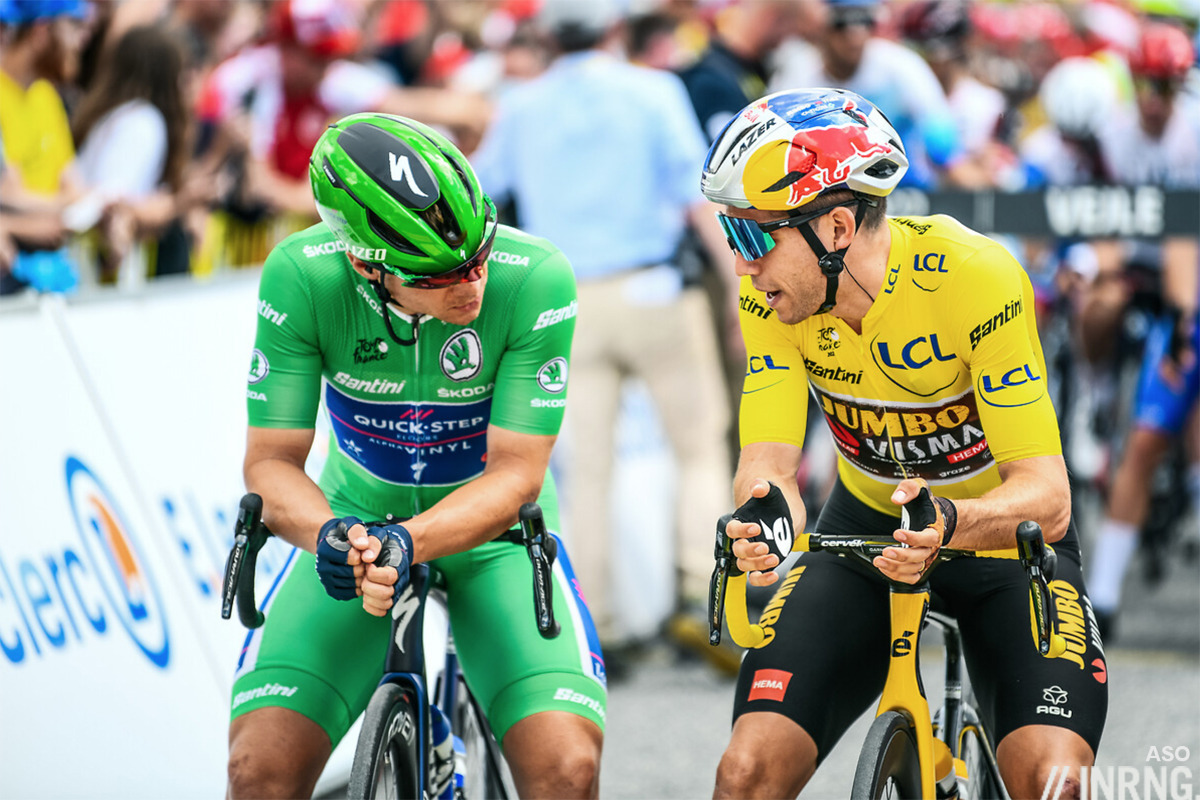 Wout in Green
Wout van Aert might be in yellow but he’s here for the green jersey and while he’s frustrated with three consecutive second places, there’s comfort in seeing different sprinters winning. Remember the points scale is 50-30-20-18-16-14-12-10-8-7-6-5-4-3 and 2 points for the first two, so rotating winners in the sprints help van Aert who is on 107 points to Jakobsen on 90. Jumbo-Visma have the yellow jersey but aren’t putting anyone on the front to defend it, leaving it to the sprint teams to pull from the start. Instead they did get together to set up the intermediate sprint.

Case open
There’s clearly tension between Fabio Jakobsen and Dylan Groenewegen on one level, but also a desire to put that Katowice crash behind them. However there is still ongoing litigation in Poland over the case so the issue just isn’t settled. Now this doesn’t mean the pair are going to be in court anytime soon, more that the case can’t be closed yet.

Patrick’s Hat-rick
One a more cheery note, Patrick Lefevere must be purring. Two stage wins plus the yellow jersey over the weekend means Quick-Step’s Tour is already a success. 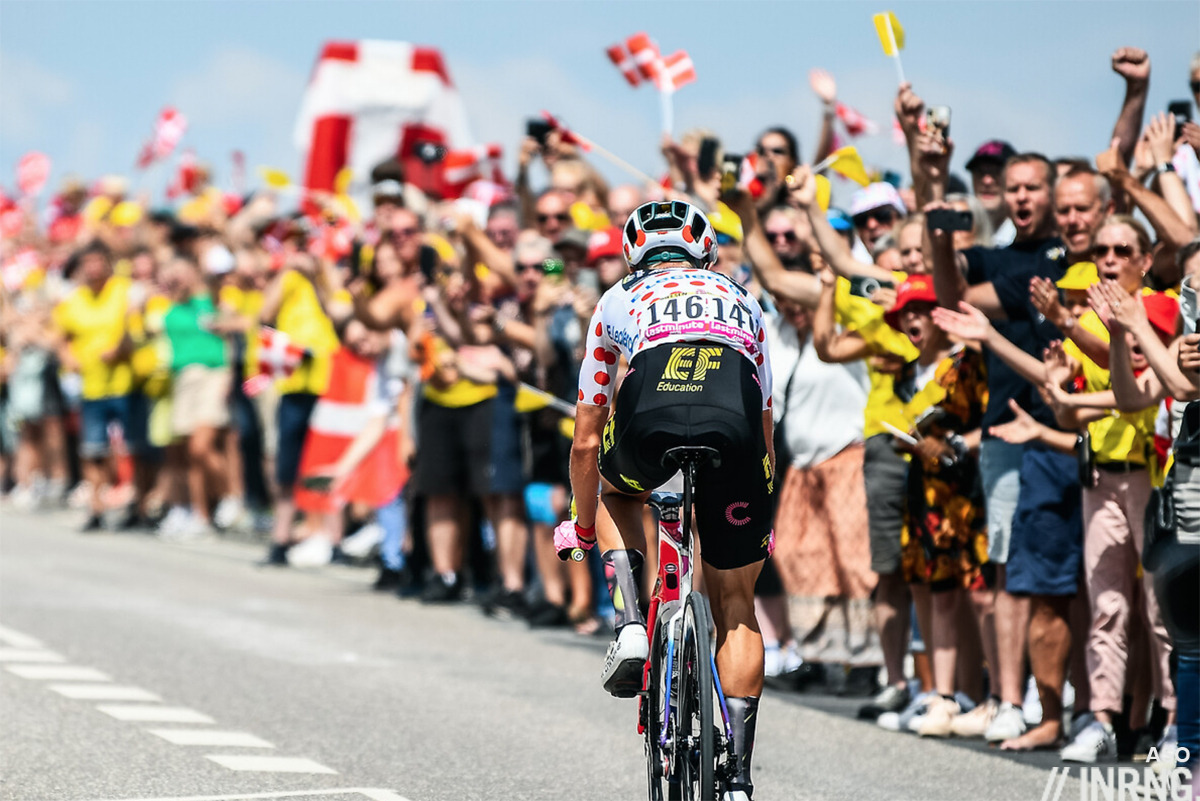 The Magnus Show
Magnus Cort leads the mountains competition and can expect to hold the jersey until Friday and the Planche des Belles Filles summit finish, a first category climb with 10 points for the winner. There are climbs in between of course but someone would have to scoop up many of them to get ahead and that’s a big ask. To the point where some riders who might have fancied going in the breakaways to score a few points might think twice. Cort’s not done either, he can aim for stage wins this week too. A decade ago he was one of the most highly sought-after U23 riders who was beating the pros when he got a chance while riding for the Conti-level Cult Energy team and signed a three year deal with Greenedge. Moving up and he’s not been as prolific a winner but has kept delivering over the years.

Tak Danmark
The Danish start was the most northern grand départ ever but perhaps the warmest one ever, up there with Yorkshire in 2014. There don’t seem to be estimates of the crowd for the whole weekend yet but the number for Copenhagen for Friday was put at 0.5 million. The rounder the number, the bigger the guess but it did feel like a sizeable share of the whole country came out to see the show. All that was missing was the wind and some more sport but at least the Tour returns to France without a single DNF.

Don’t Doubt Thomas
You can see why people are chuckling at Geraint Thomas for riding the time trial in his skinsuit… and a gilet. He even put out an emergency podcast to explain and laugh about it, even if he was kicking himself as well. The previous day he’d even had his skinsuit adjusted with needle and thread to fit better. What this cost him in time isn’t know, the aero factor, but also overheating, weight and the sheer distraction of it all. So he might have the last laugh yet.

Tune In
Unusually the Giro Donne had their rest day on a Sunday, when you’d think TV ratings would be a hit… but it means they can get plenty of attention today, see RAI or Eurosport/GCN. There’s also the Sibiu Tour in Romania and the decisive summit finish and a livestream at the race website. It matters more this year given Lotto-Soudal, Israel and Cofidis have sent teams, presumably to hunt UCI ranking points.

Nul points
There won’t be a UCI World Tour promotion/relegation update tomorrow as there aren’t any points to compute. The Tour de France points get added up (and points deducted for littering etc) only once the race is done. Groenewegen’s stage win yesterday helped, 120 points.