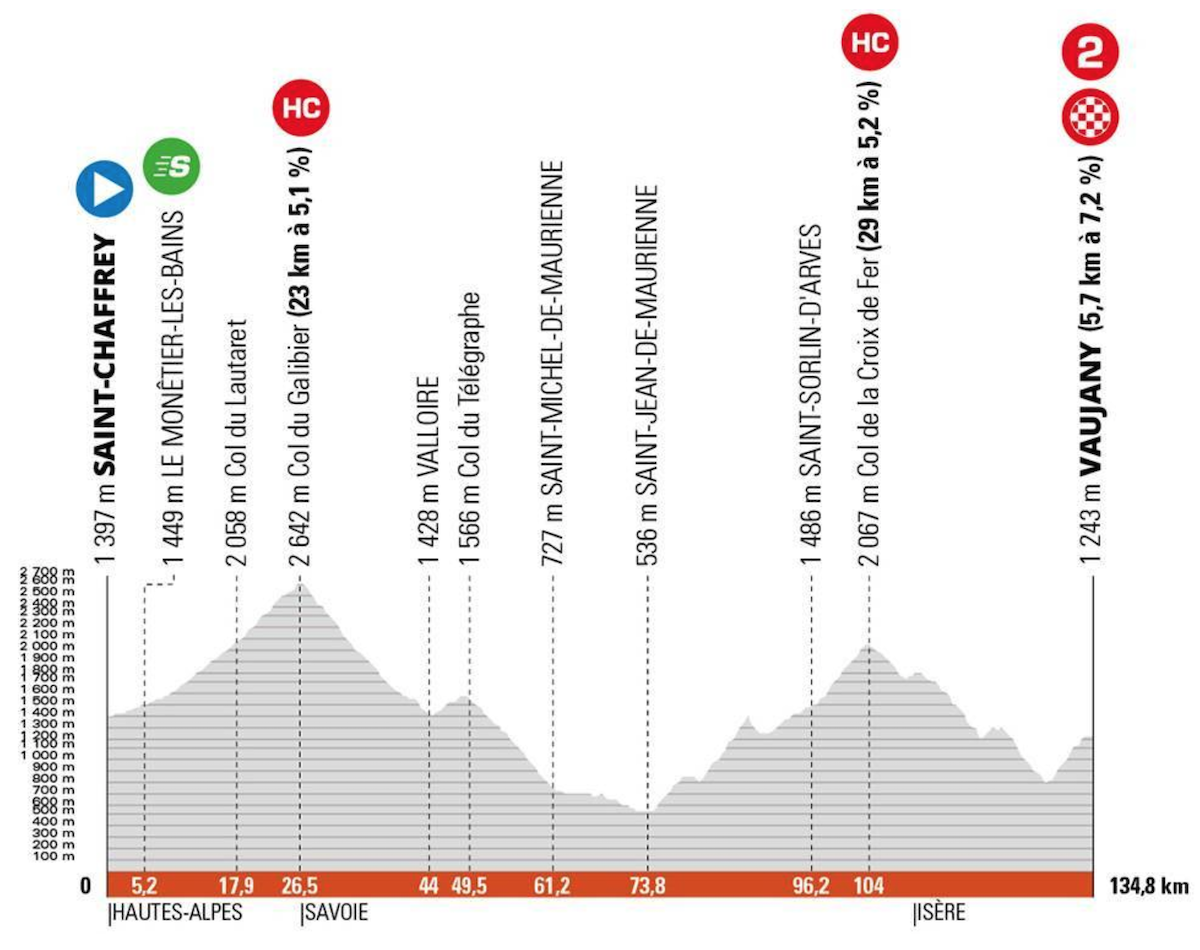 The first real Alpine mountain stage of the Dauphiné and it packs plenty in just 134km. The summit finish at the end looks small but after all that comes before it’s enough to open some useful gaps. 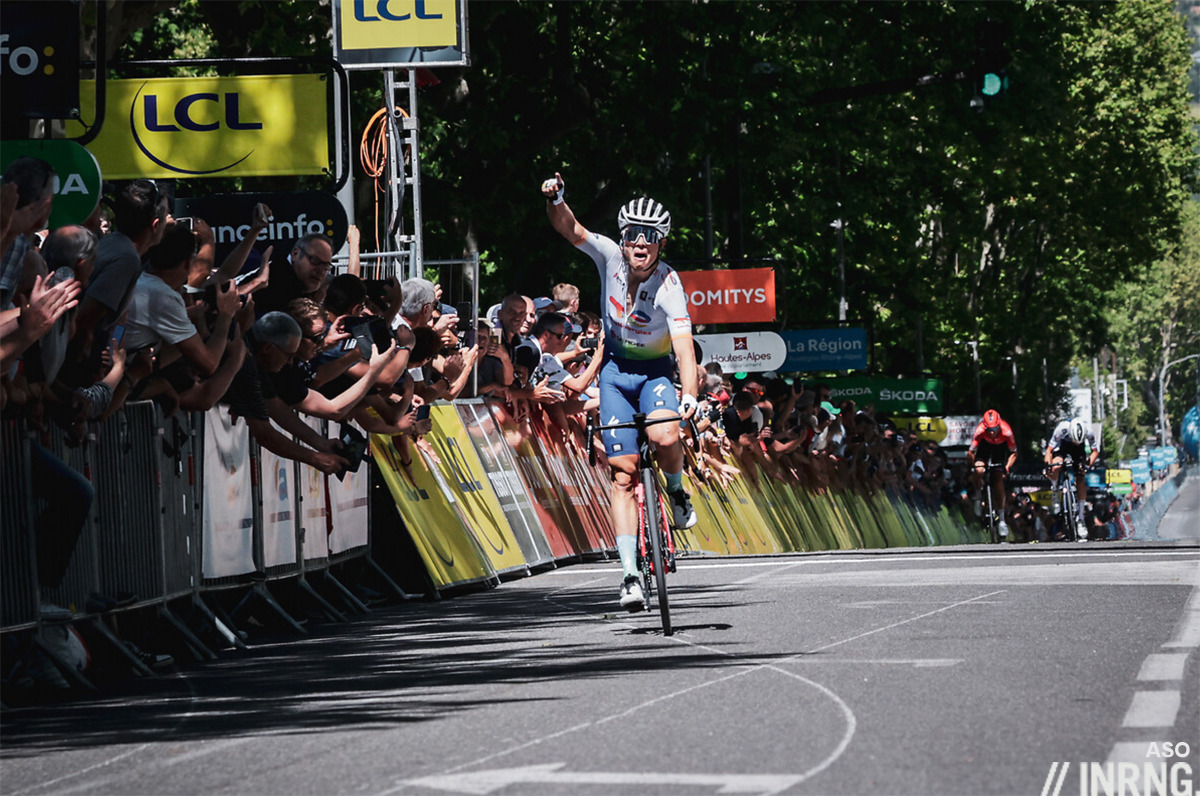 Gapped in Gap: the breakaway made it. Andrea Bagioli was being marked by all the other five escapees as the fastest in the sprint. So when Valentin Ferron attacked inside the final kilometre, he was able to get a gap. Bagioli chased but didn’t want to do it all by himself, nobody else wanted to lead out Bagioli and so Ferron won the day. The bunch wasn’t far behind, Jumbo-Visma had worked to keep the break in range to protect Van Aert’s yellow jersey and maybe Dylan Groenewegen will be nursing regrets that the day he wasn’t dropped he couldn’t sprint for the win. 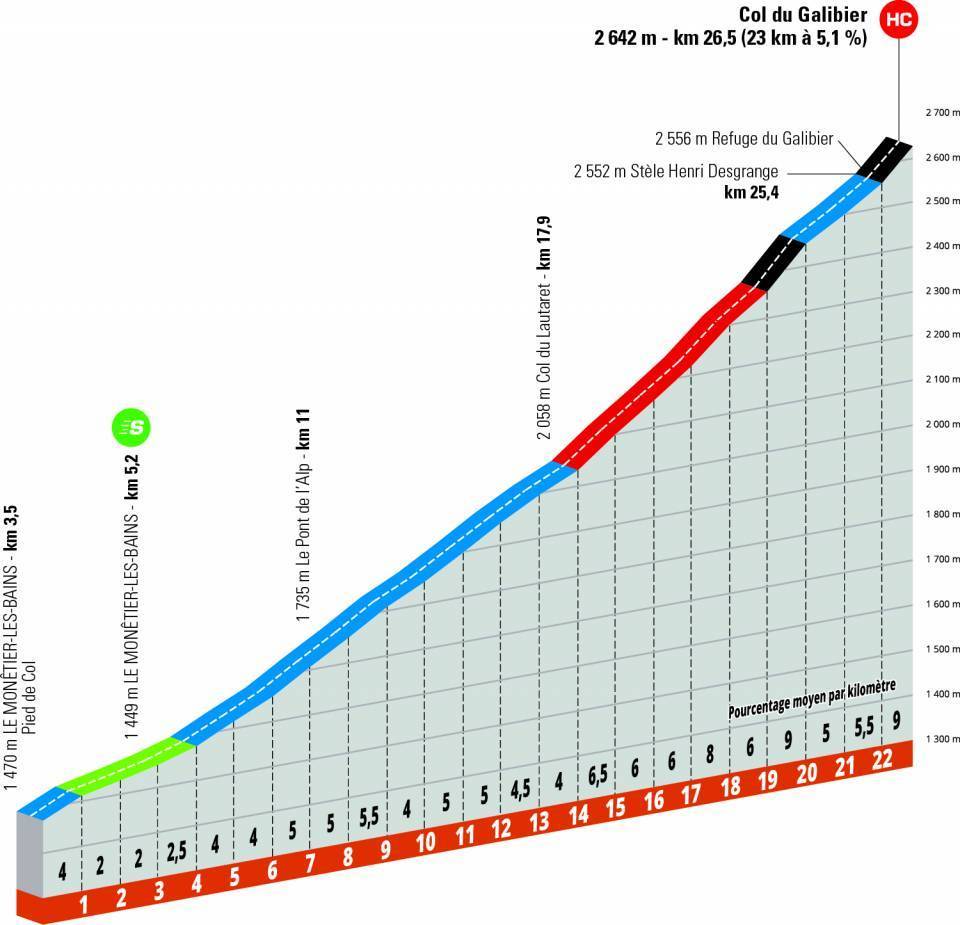 The Route: just 135km but 3,800m of vertical gain, a lot. This is a dress rehearsal for Stage 12 of the Tour de France as it’s identical until 7km to go (in July the ride on to tackle Alpe d’Huez. It’s up the Col du Lautaret and then onto the Galibier and while the profile says it’s 5.1%, that’s because it’s 2-5% for a long way until the Lautaret. Once above 2,000m altitude comes the 8% sections leading to the Galibier. Then comes the fast descent into Valloire, remember to turn the legs so they’re ready for the small climb to the Col du Télégraphe and then the descent to the Maurienne valley where there’s 10km on the valley floor. 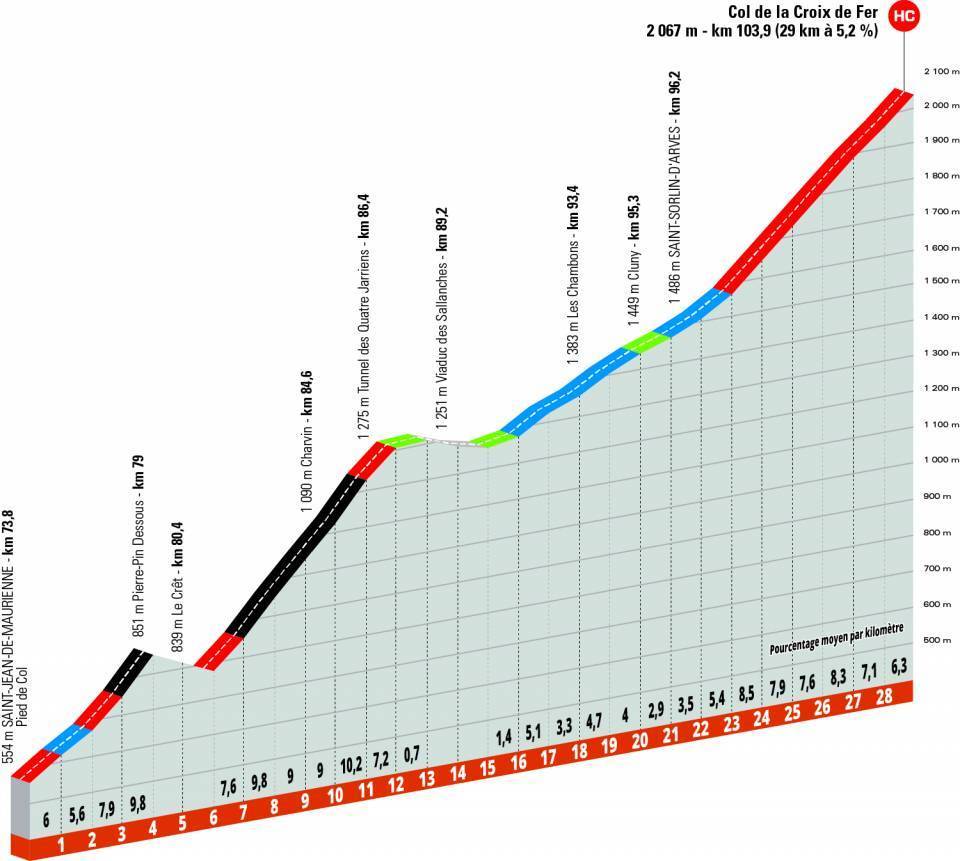 The Croix de Fer is a giant climb, 29km in total and it goes up in sections as the profile shows with some uncharacteristically steep sections early for a French ski station road. The descent is similar too as there are two uphill moments on the way down. There’s almost no flat section at bottom, a left turn leads into the final climb. 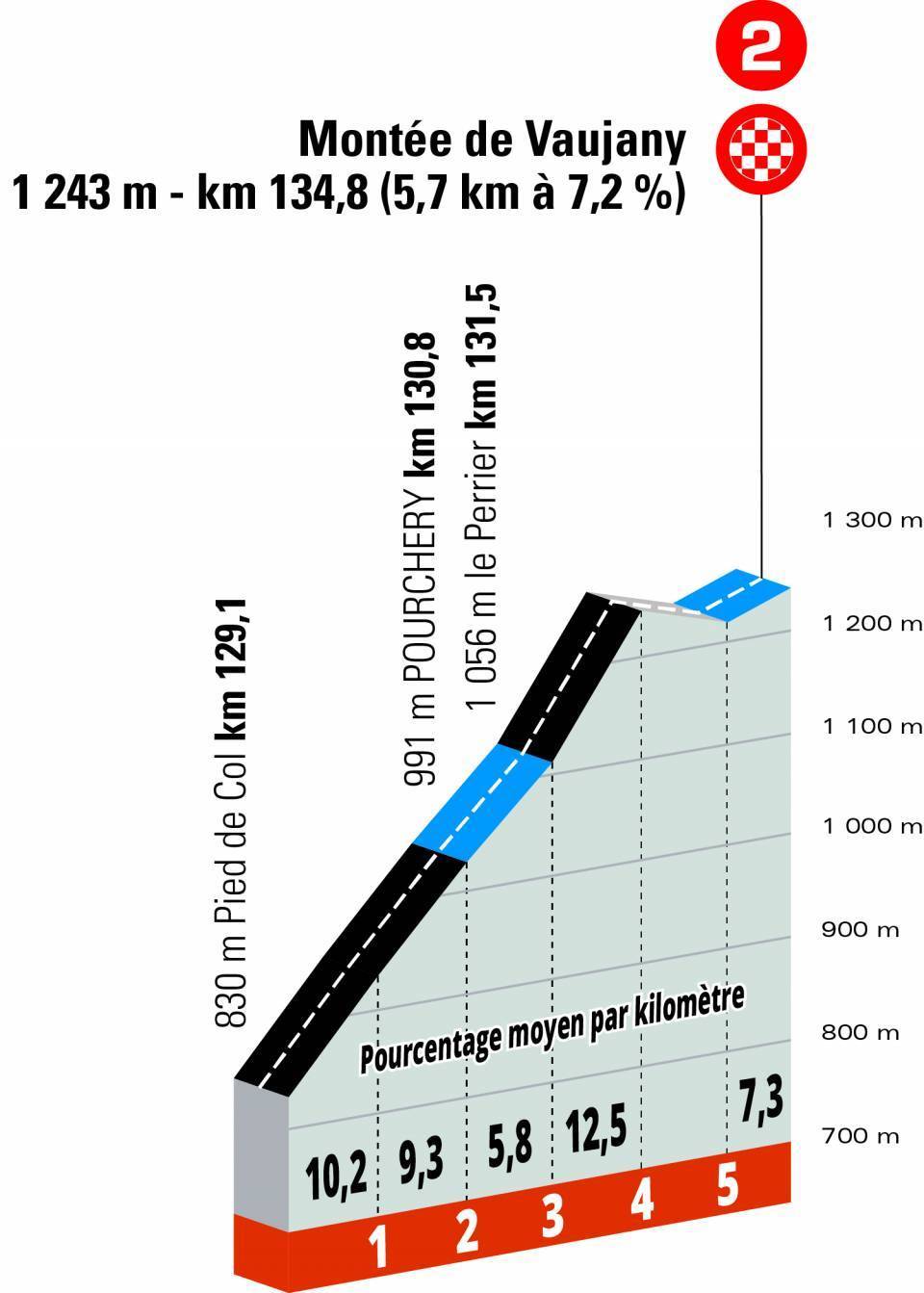 The Finish: the ski station summit finish of 6.4km at 6.5% sounds reasonable but it’s got a steady gradient of 8-10% for most of the way and then a flatter section as they approach the village of Vaujany. The early steep part is hard work, it twists with a few hairpins and if the road is wide it’s irregular with a constantly changing gradient, this might be a ski station road but it feels like an old path rather than a route engineered to take buses and trucks up to the top. The road flattens out as they enter the village but then there’s a hairpin bend and it rises at 7% for the final 300 metres.

The Contenders: Primož Roglič (Jumbo-Visma) can do many things but his speciality is climbs just like the one at the finish today. Jonas Vingegaard is a second card to play too.

David Gaudu (Groupama-FDJ) has a stage win already and can win from a sprint, his best chance for the stage win is not to go big from too far out because he’s two minutes down on GC, Jumbo-Visma can let him jump away in the final kilometre but not much further away. Likewise for Dylan Teuns (Bahrain). Ben O’Connor (Ag2r Citroën) is an agressive rider but won’t get much room but increasingly he’s very strong. As a pure climber, Esteban Chaves (EF Education) can win on a day like this and they don’t have to close him down if he moves late. Tao Geoghegan Hart (Ineos) can finish well too.

The breakaway’s got a chance as well but so far not enough riders are way down on GC. Someone like George Bennett is probably out of the GC contest being 30th at 3m47s but too close to the lead to be given much room. Michael Storer (Groupama-FDJ) fits the bill but seems short of form right now, likewise Antwan Tolhoek (Trek-Segafredo). Victor Lafay (Cofidis) was in the break yesterday and is tomorrow’s local so he might sit tight today, ditto Geoffroy Bouchard (Ag2r Citroën).

Weather: warm and sunny, 28°C in the valleys.

TV: the stage starts at 12:55pm and the finish is due at 4.55pm CEST. Tune in for the last two hours to get the Croix de Fer climb, the descent and then the Vaujany summit finish. 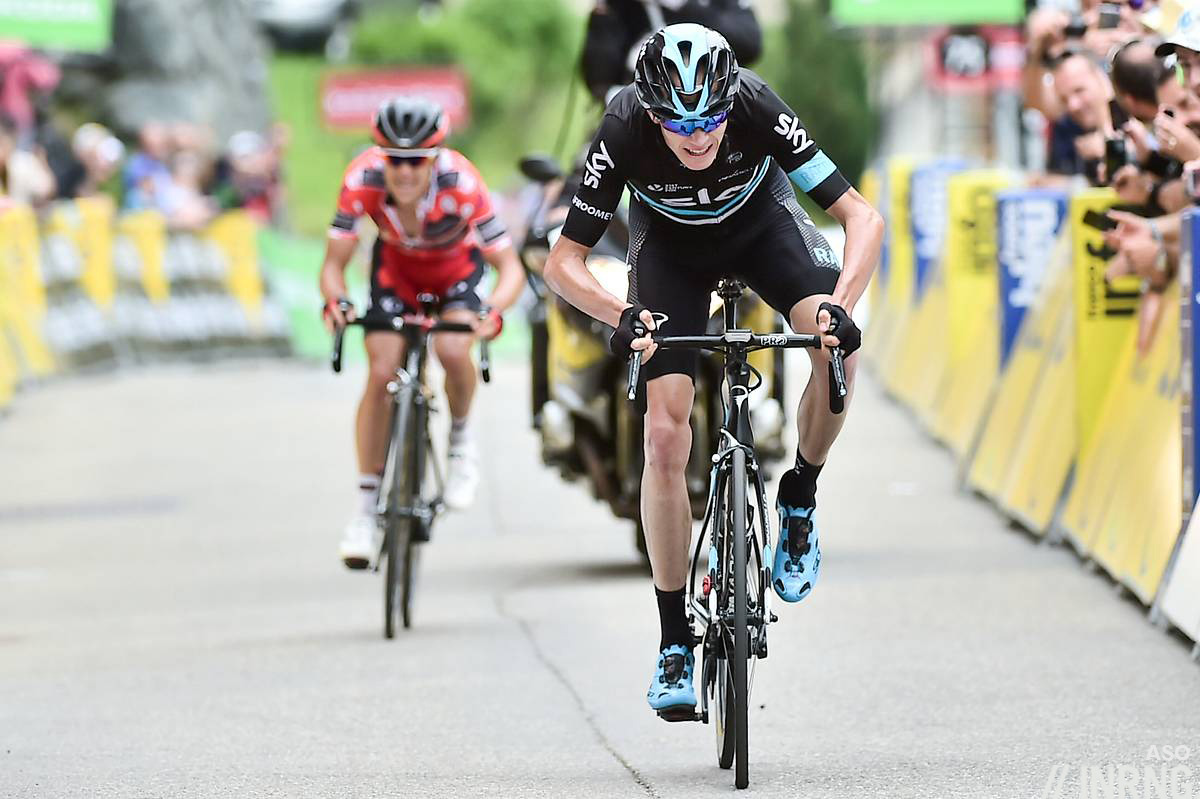 Local info: Vaujany’s a ski village just around the corner from Bourg d’Oisans and Alpe d’Huez. The Tour de France has never been but the Dauphiné visits for the fourth time today. The last time we saw Chris Froome and Ritchie Porte battling for the stage win, Froome now taking on Porte as a rival as the Australian had moved to BMC… rivals but they also united to drop Alberto Contador.

Paris-Nice has hosted a finish in March. Now a visit into the Alps in March sounds like asking for trouble but paradoxically despite the often abundant snow many roads are kept open precisely so that tourists get to their hotels and the ski lifts. As long as Paris-Nice approaches from the valley below that Vaujany can host a summit finish; today’s route would be impossible. The race that’s visited the most though is the Grande Boucle féminine, the almost forgotten women’s equivalent of the Tour de France that ran between 1992 and 2009 but without the Tour’s name and all the organisation behind it, it faded away.

Sabotage: If you want to visit you can tackle the climb to Vaujany and then push on to the Col du Sabot to go beyond 2,100m.