A circuit race outside Naples with two short climbs and plenty of tricky roads, they’re narrow and twisty and a contrast to yesterday’s near wilderness. 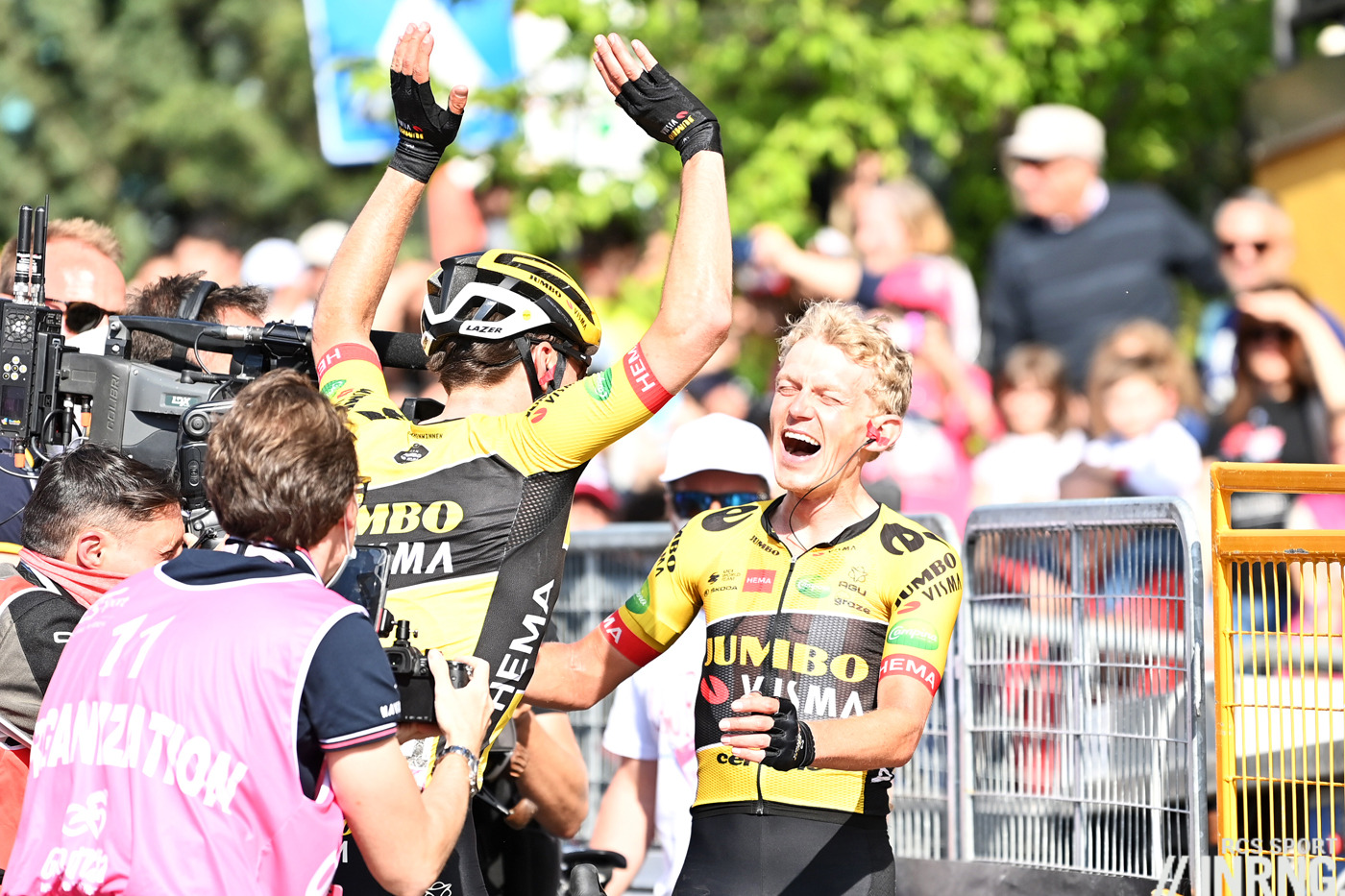 Going Dutch: a frantic stage start with Mathieu van der Poel in the thick of the action, as if he’d opened his roadbook on today’s stage rather than clocking it was a mountain stage with 4,500m of vertical gain. After many waves of attacks it was his compatriot Wout Poels (Bahrain Victorious) who looked like he’d had double rations of Vitakrok but if he got gap, he was alone and forced to press on. Finally a move formed with Wout Poels joined by Davide Formolo (UAE Team Emirates), Koen Bouwman and Tom Dumoulin (Jumbo-Visma), Davide Villella (Cofidis), Diego Camargo (EF Education-EasyPost) and Bauke Mollema (Trek-Segafredo).

Richard Carapaz had a brief attack in the wheel of Jonathan Castroviejo but this was closed down with a minute and the GC contest didn’t catch fire: they’re all waiting for Sunday’s Blockhaus stage, some say it could be the hardest stage in the race; “Castro” later crashed and we’ll learn later today if he rides on. The other GC action was relative as Trek-Segrafredo started chasing the break as the best placed rider up ahead was Bouwman at 5m30s and they didn’t want to lose the maglia rosa. Theirs was a Goldilocks chase: hot enough reel in Bouwman, cool enough to ensure Mollema stayed away.

Poels and Villella were distanced on the descent to leave a quartet of Dumoulin, Bouwman, Mollema and Formolo. The four were trading attacks you wondered what they had left for the finish, Dumoulin was being dropped but was coming back like a boxer on the ropes who kept staggering back to this feet. This though was crucial as it helped put the pressure on Mollema and Formolo while Bouwman could sit tight, just. He proved the strongest in the sprint, taking the stage to add to the mountains jersey he’s won too.

The Route: a circuit race of sorts, the race leaves the city of Naples and heads out for the west and a flat loop before then joining a circuit with four laps of a 19km circuit the Flegrea peninsula via Monte di Procida and Bacoli, start town of the 1977 Giro. The circuit has two climbs on it, one a drag and the other is steeper with a brief section at 10%. After yesterday’s stage in the Apennine wilderness today’s urban stage might feel almost claustrophobic with the narrow roads and tight bends, the two climbs matter but the narrow roads and tight corners are just as important.

Once the circuit is down it’s back to the city via the same roads used earlier and over the Posipillo headland, an extra uncategorised climb before dropping into Naples. 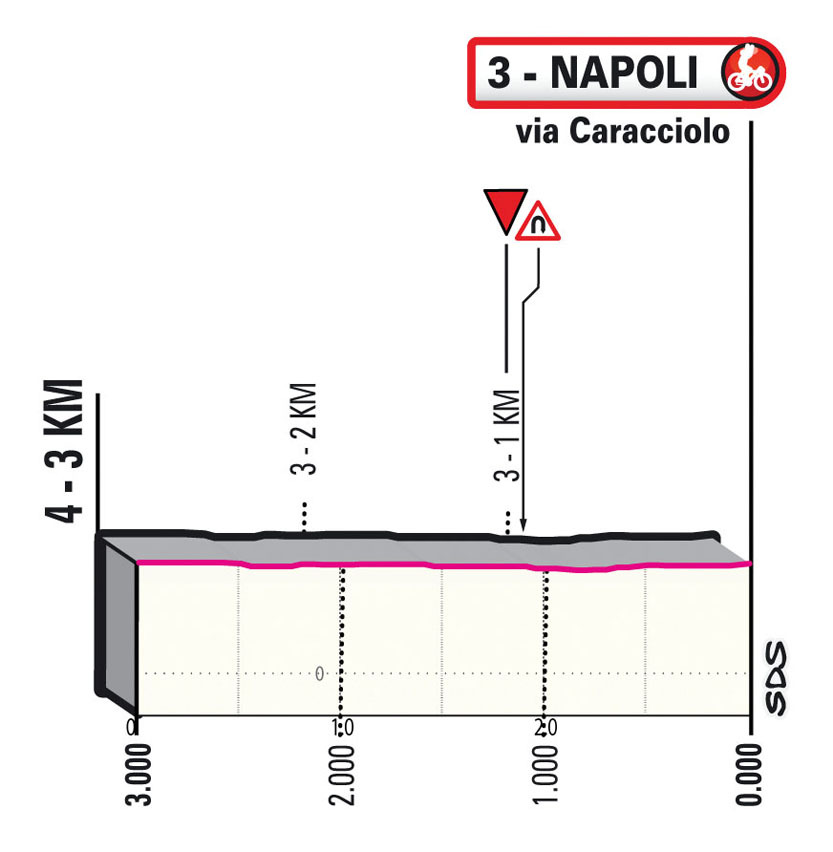 The Finish: flat and on the sea front there’s a dog-leg shaped U-turn bend at the flamme rouge before a wide open finishing straight.

The Contenders: multiple sharp climbs to scale on a twisty circuit before a flat finish? Today looks made for Mathieu van der Poel (Alpecin-Fenix) or Biniam Girmay (Intermarché-Wanty) as they can cope with the climbs and unleash a big sprint for the win. Still Caleb Ewan (Lotto-Soudal) and Arnaud Démare (Groupama-FDJ) are both handy here too.

It’s really hard to see past these four, especially as several GC teams will want to keep something in reserve for tomorrow rather than try to turn today into a palio, a jousting contest although this is no rest day, it’s hilly and the technical circuit means a crash risk, nobody wants to get caught behind. Magnus Cort (EF), Diego Ulissi (UAE), Vincenzo Albanese (Eolo-Kometa), Davide Ballerini (Quick-Step) and Andrea Vendrame (Ag2r Citroën) are the kind who could profit if the race gets more hectic.

Weather: sunny and a sea breeze from the south, 23°C

TV: the finish is forecast for 5.15pm CEST. Tune to watch the pace crank up in the final 90 minutes.

When the Giro comes to town: the Giro rides through many places but because of a circuit race it will linger in one place for longer so we can dwell on the aspect of the race coming to town. The Giro started in Bacoli in 1977 with Freddy Maertens winning the prologue. Now it’s back 45 years later and something to celebrate for locals. A book about the Giro’s visits to Campania – the wider region around Naples – has been published, a local restaurant is doing a pink tiramisu (with raspberries), another is offering a pink risotto. There have been public meetings, organised talks and more. Not every stage has an accompanying book but you will find town halls holding exhibitions, ex-pros and local journalists giving talks and general cultural activities in around it all, as well as police/municipal meetings where the locals, shopkeepers and businesses can learn which roads will be closed and from what time. Now not everyone is involved, the people who knew from the day of the route presentation – or before – that the Giro was coming are likely to attend but the short version is all sorts of towns and villages turn pink months before the Giro arrives.