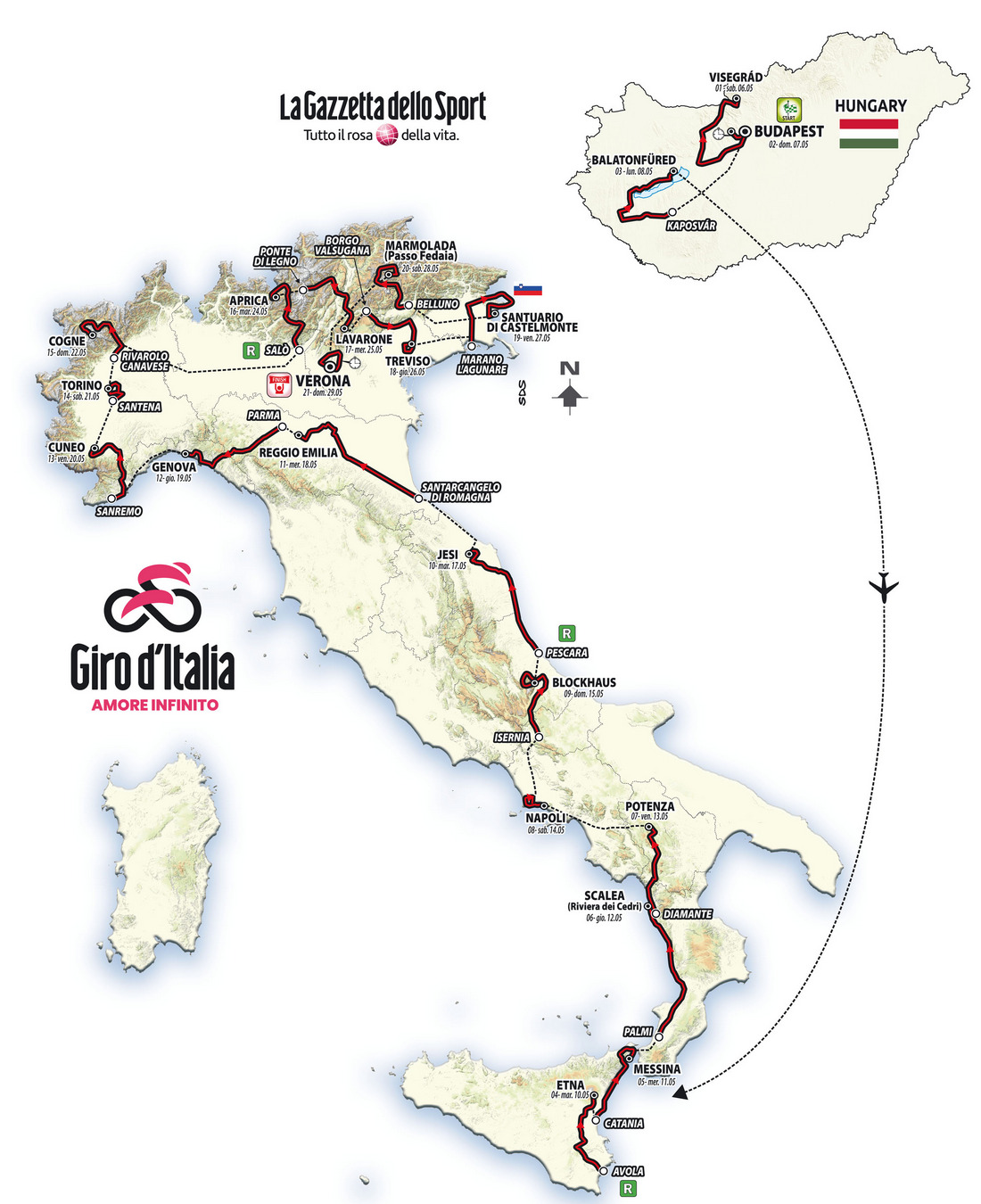 The route of the 2022 Giro d’Italia has finally been unveiled and a tough edition awaits.

First a quick note on the route announcement, there was no TV presentation this time and as a result, organisers RCS decided to try and make a stunt by releasing batches of stages online, first the Grande Partenza was unveiled, then the sprint stages, the mountain stages and so on. It’s been tedious, like ordering a pizza on for the pizzaïolo to emerge from the kitchen and show you the flour. Then ten minutes later the doors opened and instead of a pizza, the proud chef would show you the mozzarella. Another wait and the tomatoes were on display and you’ve endured a parade of ingredients when you’re hungry for the dish. Because, like a pizza, a grand tour is more than a collection of 21 stages, how they are arranged and fit together is as important as the route for each day. With that in mind, let’s tuck in…

Stage 1 is on the Friday and a road stage to Visegrad and an uphill finish to the castle that’s remiscient of the Namur citadel finish of the GP de Wallonie. Here it’s 5km at 5% and a wide road but the slope bites towards the top.

Stage 2 revives and extends the TT route that was planned for the original start in 2020, it’s a big boulevard course over 9.2km and the final km includes cobbles and gets steep at the end. Stage 3 is a sprint stage along the shores of Lake Balaton and starts in Kaposvàr which happens to be the HQ of Kometa, the pork processing company that sponsors the Eolo-Kometa team so you can guess one of the invited wildcard teams already. Then Monday is the rest day and travel for the convoy as the race heads for Sicily. 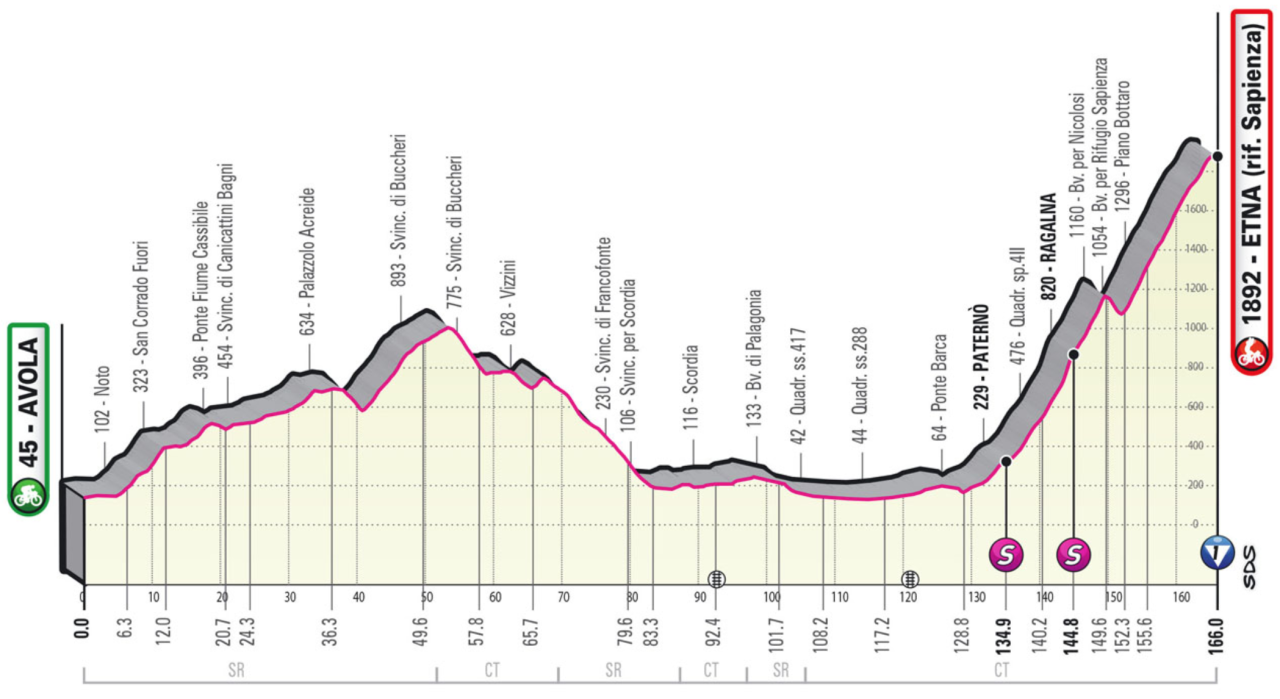 Stage 4 is already an Etna summit finish and a big day for the GC contenders. It’s a familiar location now for the Giro and uses old roads but in new ways, first the section to Ragalna as used in 2018 with sprints on the way, then the climb to the top features the same finale as 2017 when Jan Polanc won. 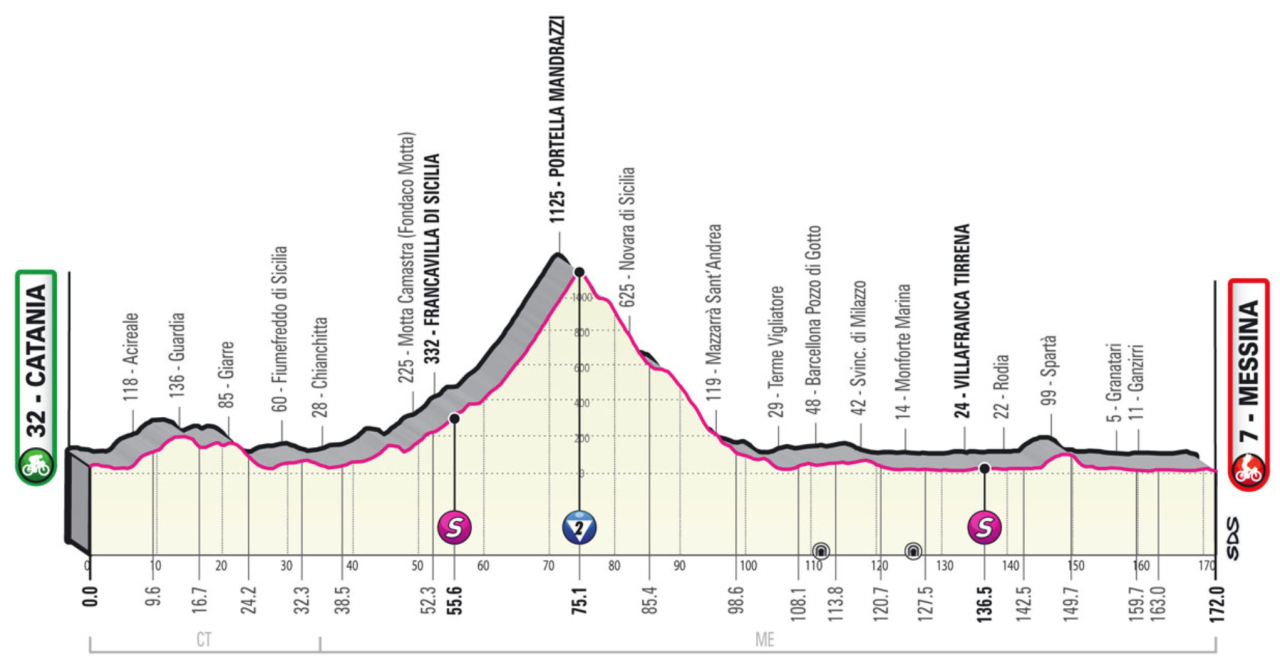 Stage 5 has some climbs to tempt an early breakaway but it’s a likely sprint finish. The Giro has a lot of vertical gain and days like this help the count. Stage 6 is another day for the sprinters as the race heads up the coast.

Stage 7 features an intriguing route with a reported 4,490m of vertical gain, as much as any Alpine stage and constant climbing and descending. With the TT and the Etna summit finish some will be well down on GC. There’s a good chance for the breakaway and for someone to rent the maglia rosa for a week. Stage 8 is a circuit race around Naples, a hilly 19km loop repeated six times, it’d make a good worlds circuit. 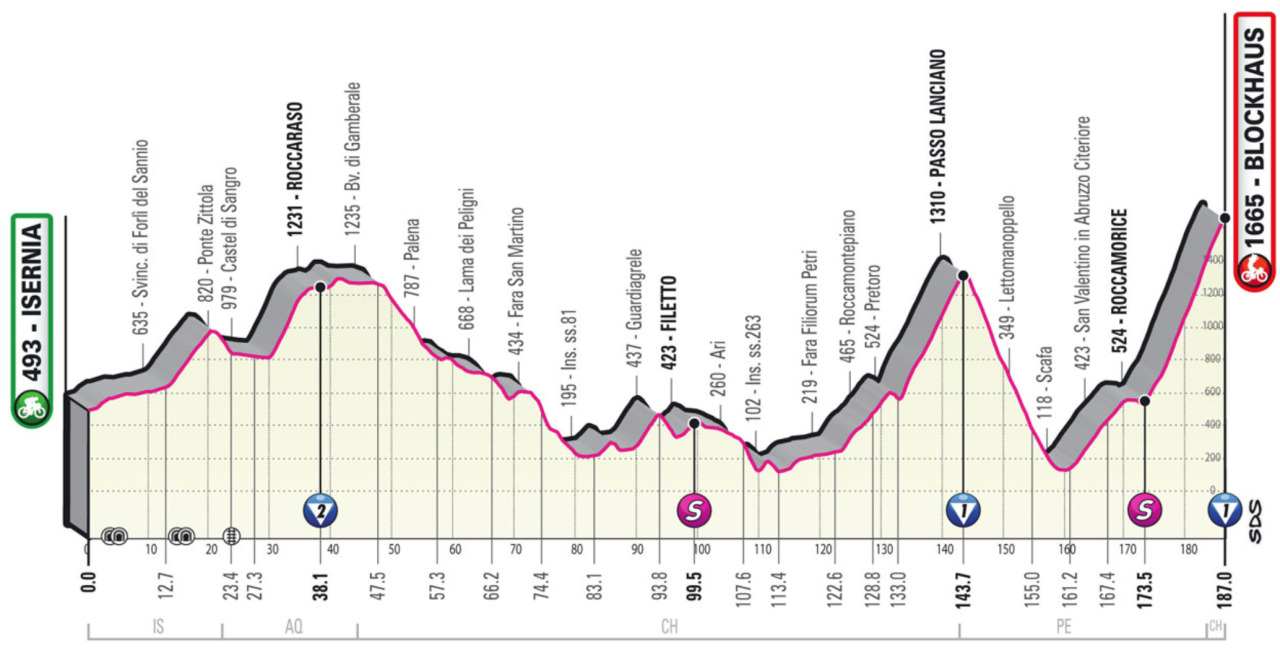 Stage 9 is the Blockhaus “summit” finish although the Giro these days only finishes at 1650m when the top of the road goes to 2,000m. But it’s plenty, Nairo Quintana won here last time, beating Thibaut Pinot and the surprise of Tom Dumoulin. Talking of surprise the race came here in 1967 and an infamous newspaper headline the next day was “Un velocista belga supera i nostri scalatori“, or “Belgian sprinter beats our climbers”… a young Eddy Merckx of course.

Stage 10 has a flat start and the rest of the day doesn’t look like much but the hills of the Marche are steep (and often cracked and potholed) so a lot of sprinters will be dropped.

Stage 11 is a classic sprint stage and an active rest day for many in the peloton, the course so flat, the hardest workers will be TV and radio commentators trying to fill the airtime with something.

Stage 12 another intriguing route in the arid Ligurian hills around Genoa because the final can reward attacks. The Monte Becco-Monte Fasce climb is key, take a slender lead over the top and you can hope to keep it by the finish. But this isn’t ambush country, the roads are often wide, except for the final descent which is narrow and awkward. It should be dry.

Stage 13 starts in Sanremo and traces the primavera route backwards for a while before heading inland and a likely sprint in Cuneo at the foot of the Alps.

Stage 14 is another circuit race, this time it’s got the Superga climb outside Torino and its sister climb across the same ridge, the Colle della Maddalena and there’s also the Santa Brigida climb and more. It’s only 153km but there’s 3750m of vertical gain and all on twisting roads, there’s little time to rest at all.

Stage 15 is a mountain stage into the Aosta valley and instead if riding straight up the valley the route sways like a snowboarder in a half-pipe. First it’s up to the left and then down, then up to the right and back down to the valley. They’re both hard climbs and have been used by the U23 Giro della Valle d’Aosta race. The final one to Cogne is more of a gradual drag on the whole but you’d hesitate to call it a big ring climb. It’s the sort of place where Richard Carapaz could power away from the pure climbers. 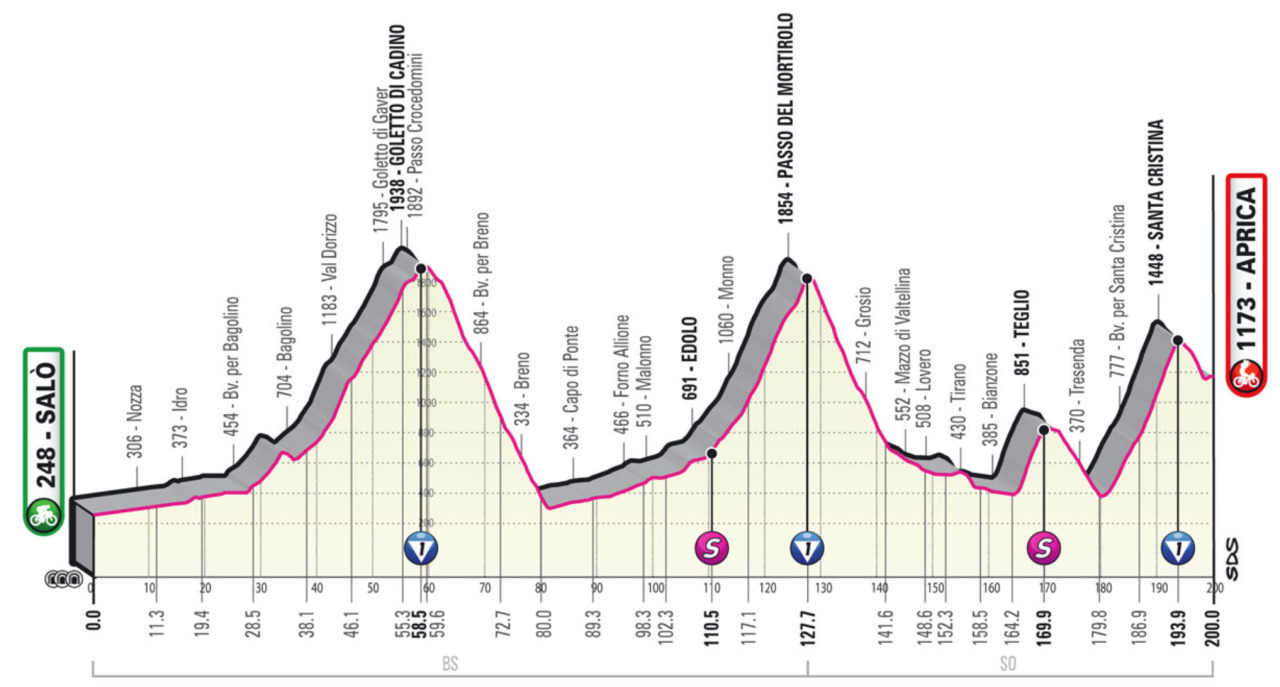 Stage 16 is a huge day in the mountains, a reported 5,440m of vertical gain and at 200km, the longest of the mountain stages which is shorter than usual. Sure the Mortirolo is climbed via the easier side from Nonno but it’s still hard, plenty of 8%. The road to Teglio is marked as a sprint but it’s a tough climb to get there 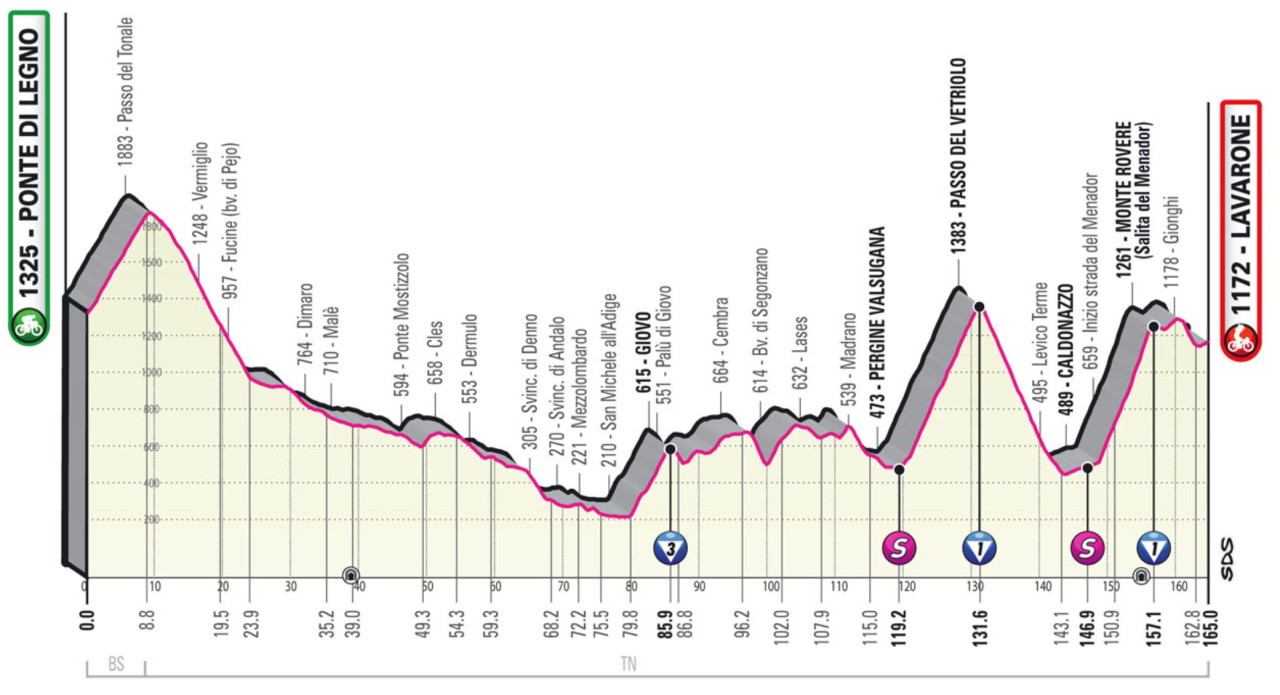 Stage 17 starts up the Tonale, a chance for the breakaway to go clear but the battle could go on during the descent and the steep climb to Giovo could be needed. The “Passo del Vetriolo” is a tough, awkward climb – although the name’s an invention by the Giro, no such place exists on the ground – and the descent is toboggan-style to the valley and then comes the Menador climb to Monte Rovere, the Kaiserjägerweg road and one of the fringe benefits of history as this was an old military road, once built to kill but now a scenic ride up the cliffside and through narrow tunnels.

Stage 18 is a sprint interlude but we’ll see which sprinters remain in the race and whether the breakaway can have an advantage. The Ca’ del Poggio climb features to spice things up but there’s 50km to get it together before Treviso.

Stage 19 makes a detour to Slovenia, the new Yorkshire, but first a dash through Buja, a village of sorts, perhaps even a collection of villages, but home to Il Rosso di Buja, Alessandro de Marchi, so guess who is going in the breakaway? Listed as a mid-mountain stage, you can make a good argument to delete the mid- prefix. Kolovrat is Slovenian for “spinning wheel” but good luck with that on the climb here as it’s 10km of 10%. The final climb is 7km at 5% but note the dip in the middle, the final 4km are a more selective 7-8%. 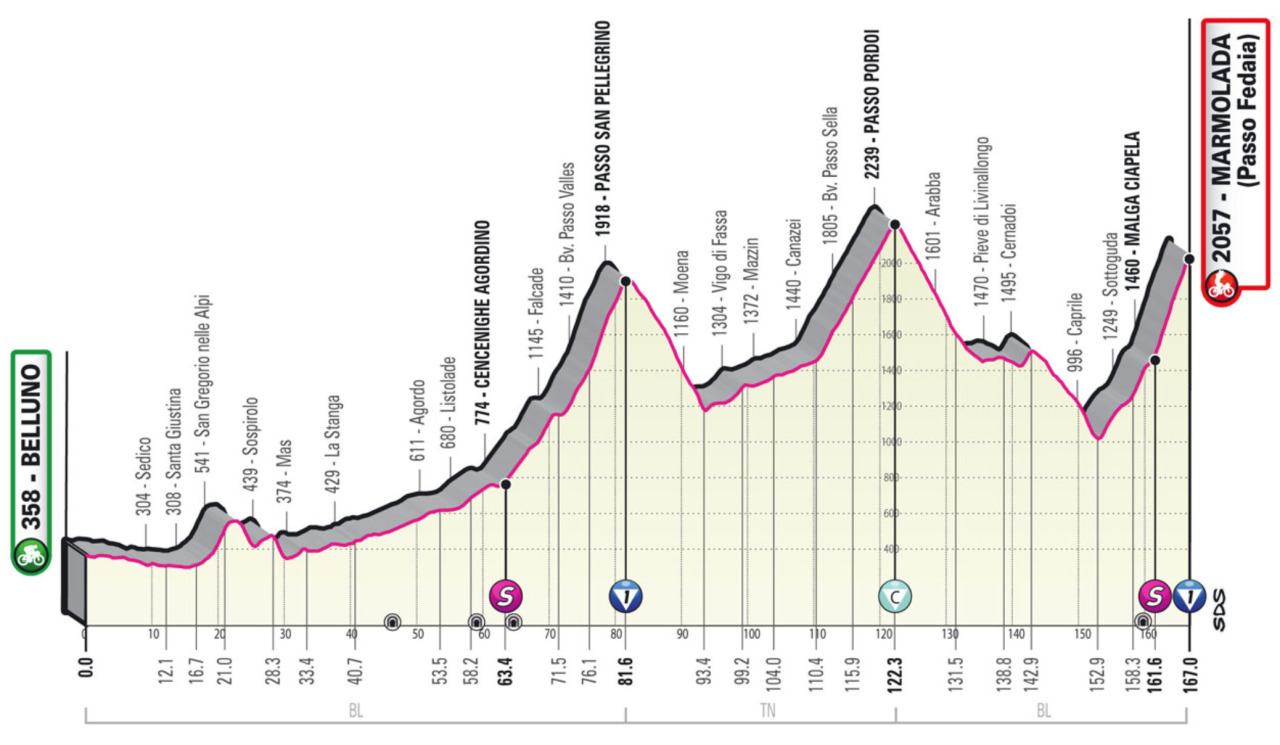 Stage 20 is the last hurrah in the mountains and a big day. There’s an early climb thrown in before a dash up the valley into the Dolomotes and the steady San Pellegrino and Pordoi climbs before the mean Marmolada and its double-digit gradients. Weather permitting. 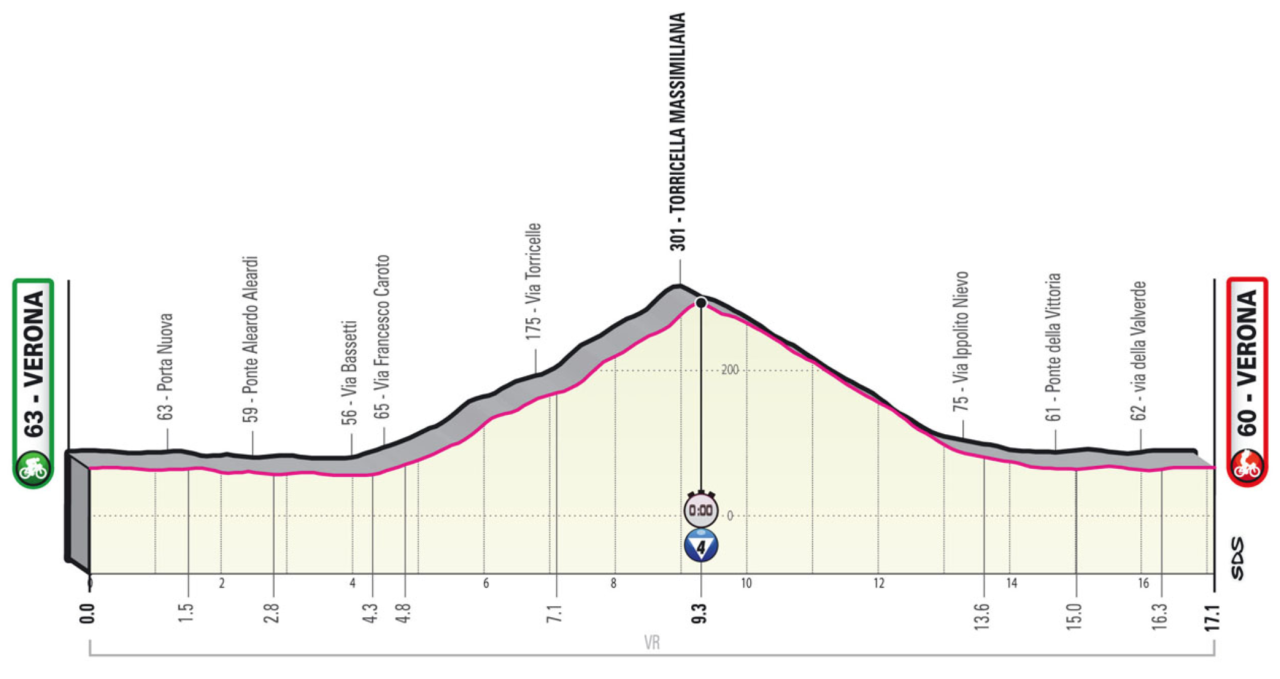 Stage 21 features a copycat time trial in Verona, the same course as when Chad Haga won in 2019 complete with the arena finish and Primož Roglič overhauled Mikel Landa – of course – to take the last podium place.

The Verdict
Just 26km of time trials and no team time trial either make this an edition that will tempt every climber, who can now dream of winning a grand tour outright rather than consolatory stage wins in the Tour while the spoils go the Slovenians, or maybe the Ineos millionaires. We’ve seen the trend for reducing time trials in the Tour and Vuelta but the Giro had resisted this, until now when it’s gone for the fewest kilometres in memory although whether this is a trend or just a test remains to be seen but it’s remarkable given a mid-race TT could have generated a home win for Filippo Ganna and the attendant audience ratings. On the whole stages are often shorter too, the longest mountain stage is 200km and if there are other stages of 201km, that’s it and gone are the 240km days. Yet in no way is this an easy Giro, there are few sprint stages and a lot of vertical gain.

The big question is who is going to start. With Egan Bernal returning to the Tour does Richard Carapaz get a leadership role here instead? Simon Yates will fancy the course. Is Jonas Vingegaard obliged to start the Tour in Copenhagen or can he escape the pressure and find a course to suit. UAE’s new recruit João Almeida would have liked more TTs and has still to convince on the big, long climbs although he’s on course.