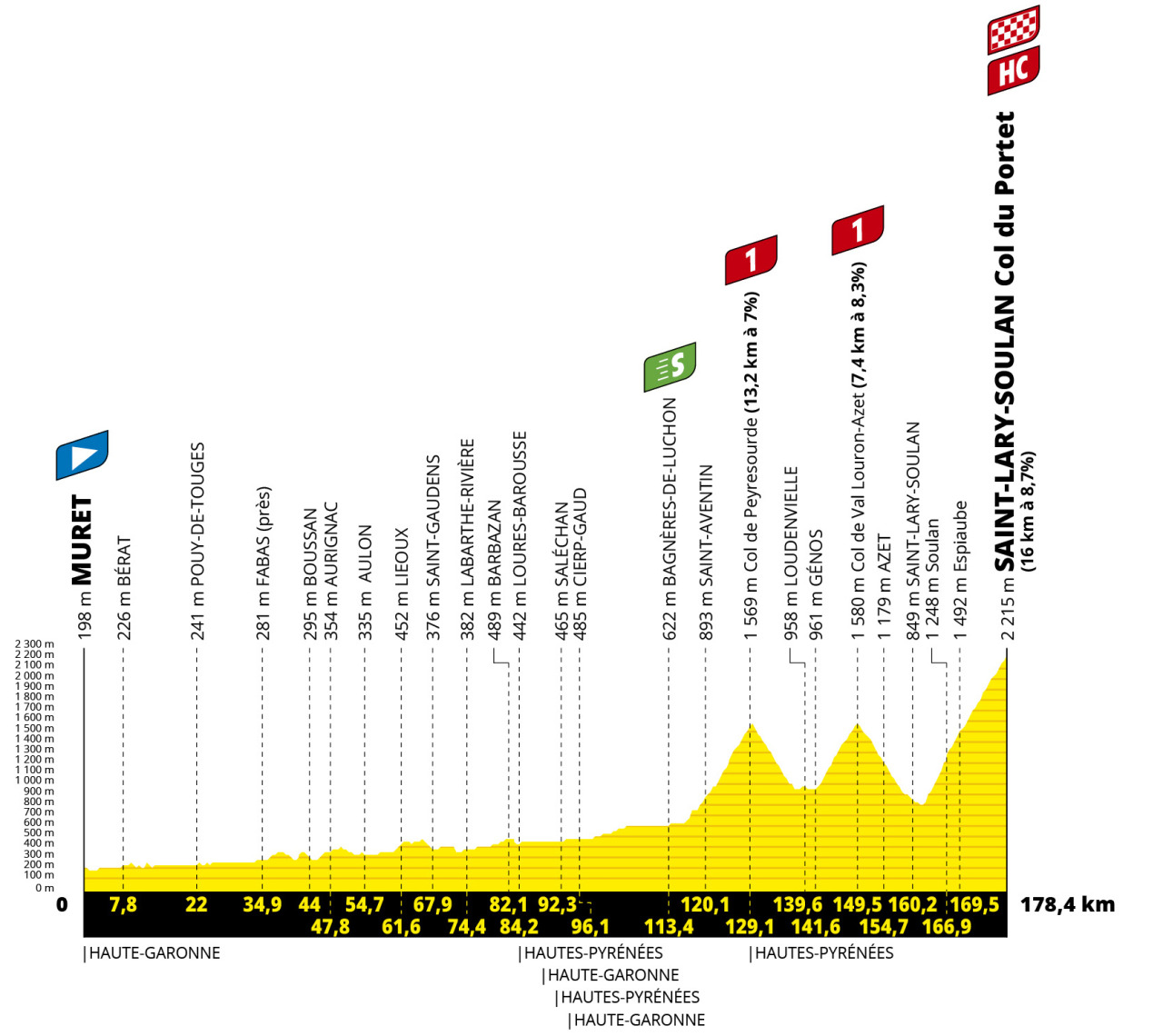 A dash across the plains before a three difficult climbs and two hectic descents for a stage battle, the mountains competition and maybe some movement in the top-10 on GC. It’s also le quatorze juillet, Bastille Day in English, but a damp one. 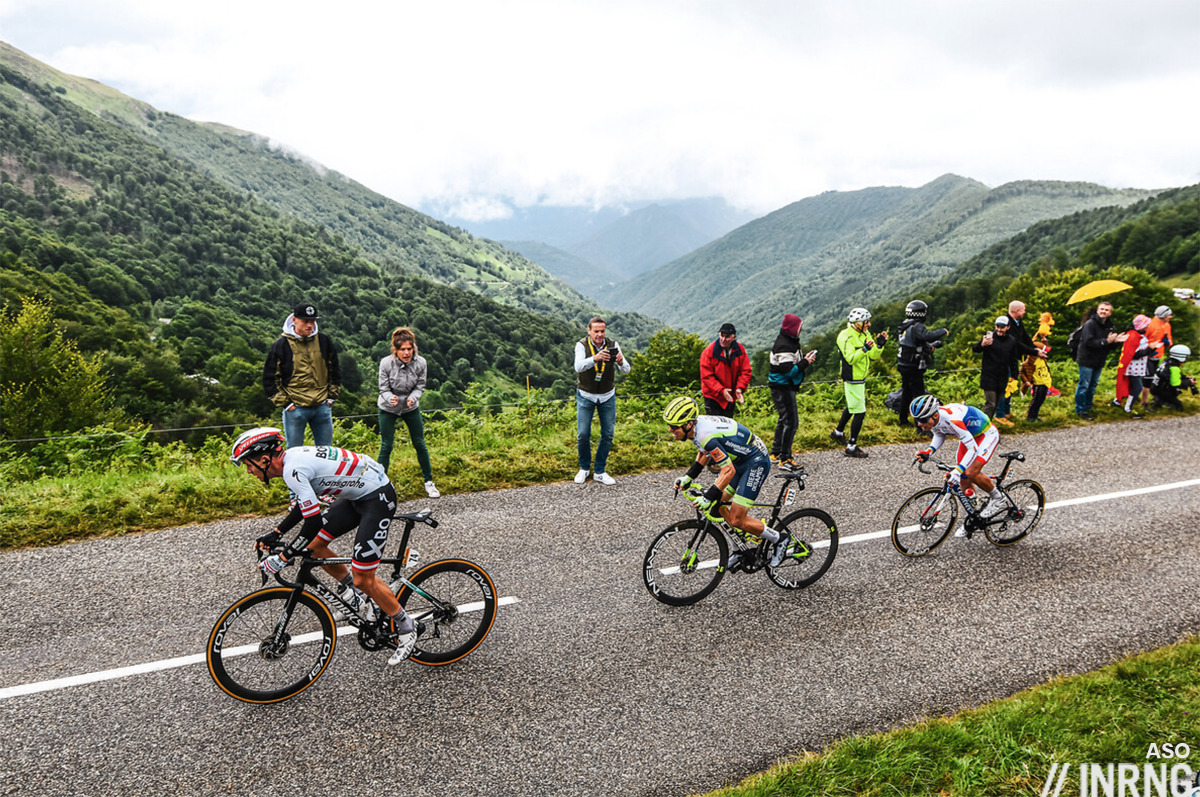 Konradsport: a lively day’s racing at the front and more of a procession at the back until late. Patrick Konrad gave a demonstration, he’d counter-attacked from a move across to a small lead group which never even got a minutes’ lead, often hovering around a slender 30 seconds. Konrad crossed the Col de la Core just two riders left in Fabien Doubey and Jan Bakelants and on the Portet d’Aspet he went solo as Sonny Colbrelli and David Gaudu led the chase, even extending his lead on the valley roads out of the mountains. It was an impressive ride but the sort of thing a rider who has finished on the podium in the Tour de Suisse and top-10 in the Giro should do if they’re freed for stage hunting.

Behind things were quiet until Cofidis did what Ineos, Movistar and Astana didn’t and attacked the GC group, exploiting the short wall climb of Aspret-Sarrat. Wout van Aert joined in with a long pull that helped towed a group of 13 riders clear but all the top-10 overall were present, nobody caught out, an illustration of how close things are in the top-10 overall. That might change today.

The Route: 178km and over 4,000m of vertical gain and most of this backloaded. There’s a flat run out of the start, it’s often exposed and there will be a 3/4 headwind to start with but this becomes a crosswind after 35km and on a road that is part-sheltered at times, part on a ridge at other times. This will make it more than a vanilla dash to the mountains but on balance should probably do more to shape the breakaway than the GC and the route becomes more protected after 70km and Saint-Gaudens. From here it’s over the small but sheltered Col de la Hountararède into the mountains and the Garonne valley and the gradual drag to Bagnères-de-Luchon, 113km in total of relatively flat roads.

The Col de Peyresourde is where the climbing starts, 13km at 7%. Early in the climb there’s even a brief descent. Then it’s 7-8% almost all the way up. One characteristic of this climb is the wide road, it feels less like a mountain pass at times and more like a boulevard. It’s also got big visibility, riders can see groups ahead. The descent is fast and furious down into Estarvielle and Louvenvielle and then a few flat roads which twist and turn and then it’s onto Genos and the next climb.

The Col d’Azet is short at 7.4km but a steep climb with a very steep start. It’s defined by the series short ramps between the tight hairpin bends. The descent down to Azet is the most technical part of the day and arguably the most difficult descent of this year’s race. It’s steep and there are a few irregular bends at the top and then a bumpy road surface. But it’s through the village of Azet that the road resembles a luge piste, only without the cambers. 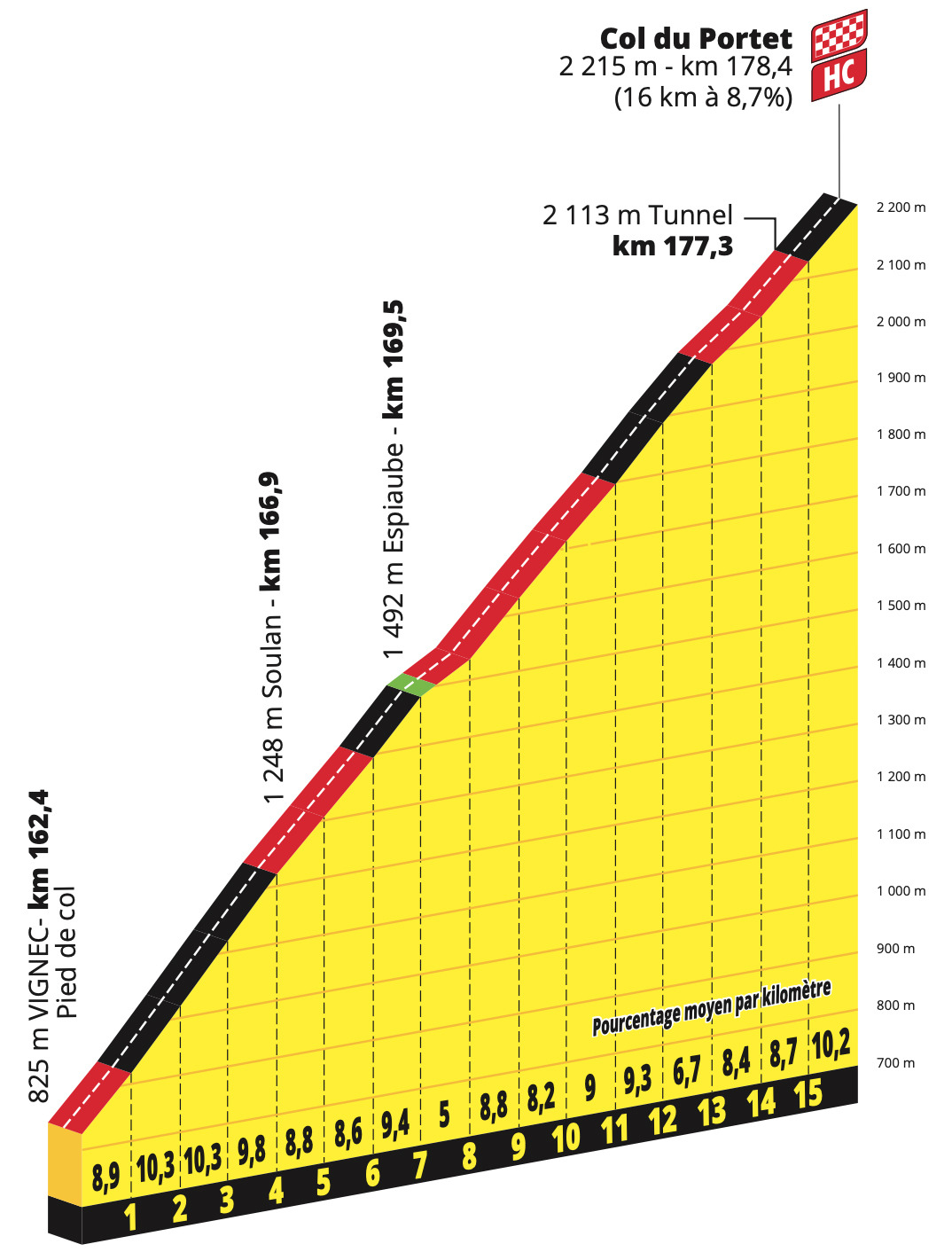 The Finish: the Col de Portet is 16km at 8.7%, a beast of a climb. It starts out with a familiar stretch, the first 6.5km out of Saint Lary is the same road to the habitual summit finish at Pla d’Adet, a wide but steep road which averages 10%. There’s a brief flat section at Espiaube and the junction to the “new” road. From here on the road is exposed on the mountain-side and steep for the most part but irregular, the slope changes every few hundred metres, any respite just means a ramp is coming in a few hundred metres. There’s a tunnel towards the top and it’s uphill all the way to the line.

The Contenders: the breakaway has a good chance again, a climber can win today but ideally they’ll need help from a team mate to launch them into the day’s move and it’s another “wheel of fortune” scenario to see who can get into the right move. The stage also overlaps with the mountains contest with double points available at the HC-rated finish today, 40 points for first place. So Wout Poels (Bahrain) and Nairo Quintana (Arkéa-Samsic) come to mind, the same for Michael Woods (Israel). Remember the Tour has been here before and Quintana won then.

Ineos might still want to get Richard Carapaz onto the podium in Paris. He’s fourth overall but likely to lose time in the Libourne TT, so he needs to gain time on Vingegaard and Uràn in the next two days and easier said than done. Or do the team also try and get a stage win by sending riders ahead. But who? None of them look to be in obvious form to take the stage, perhaps Richie Porte or Geraint Thomas?

Miguel Angel Lopez (Movistar) is a long shot but suited to long steady climbs deep into the third week. Sep Kuss (Jumbo-Visma) can climb for a double stage win but could be guarding Vingegaard, plus the cold weather isn’t ideal. Esteban Chaves (Bike Exchange) has had a quiet Tour so far but is suited. David Gaudu (Groupama-FDJ) is probably better suited to sit tight today in order to recover for tomorrow but can still feature.

Tadej Pogačar makes a safe pick but his UAE team are unlikely to mow down the breakaway so any GC action is likely to happen behind the stage win battle. But if the break can’t form quickly or its a hectic stage he’s in with a chance and a win today and another tomorrow and he could be in the polka dot jersey too.

Weather: cold and wet, 18°C in the valley and 10°C on the passes, more Toussaint than 14 July. Update 9.30am: the forecast 25km/h wind is more like 15km/h this morning so a mild headwind for the first 35km and when the flicks south for the next 35km/h it’ll be a crosswind in places but not strong.

TV: the stage starts at 11.50am and finish is forecast for 5.05pm CEST. It’s another likely sandwich stage with action at the start, then things calm down once into the mountain valleys before the final climb but watch out if any teams try to exploit the crosswinds.

Off on a tangent: the Col de Portet is now the highest paved pass in the French Pyrenees. Newly surfaced in time for the 2018 Tour de France, it is a tourist attraction for visiting cyclists who can bag a pass above 2,000m during a stay, siphoning visitors away from the Tourmalet. Previously it was just a dirt track under a ski lift, a service road for a ski slope. But like many ski resorts, the summer season is becoming as important as winter and cycling is a big draw to the point where resorts are now investing in roads for cyclists, much like the Col de la Loze. This can include racers, tourists but also families and others looking to rent e-bikes for a day and it’s this latter category is growing exponentially. To visit the Pyrenees is to remark on just how many people are riding uphill in that low cadence but easy giveaway movement; to visit again a year later is to see just how even more people are doing this and it’s a boon for tourism, a boom even. The Portet is a nice climb, a dead end meaning you’ll find more cattle and sheep on the road than vehicles, but because it lacks legendary status it’s not a destination yet. Which is why it’s on the Tour route today and is bound to be a fixture in the coming years too.