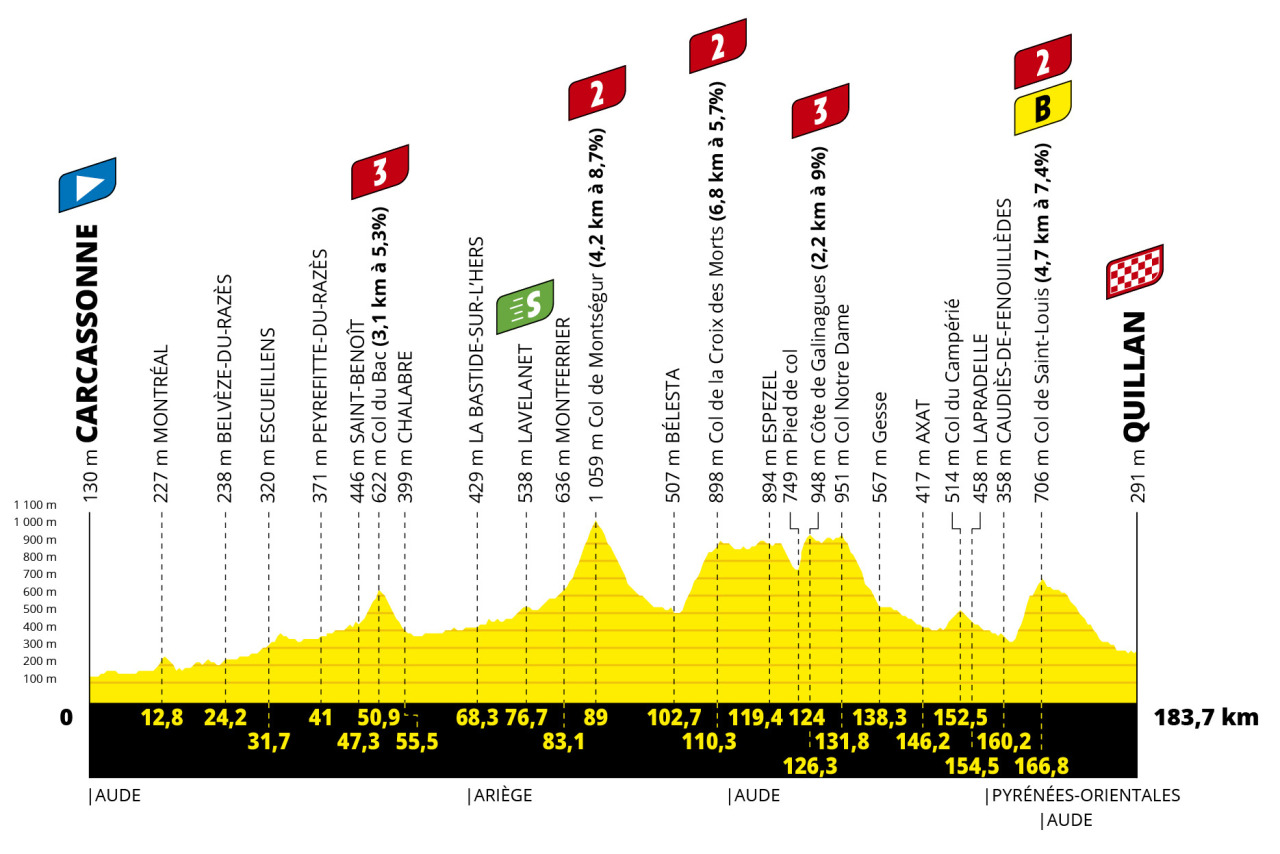 A mountain stage, a scenic stage and above all the breakaway stage. A lot of riders will have had today in their diaries as their chance of a stage win.

Stage 13 Review: for riders who can’t climb, yesterday was probably the last chance for a breakaway and a stage win but the wind stayed calm and Deceuninck-Quickstep set about filtering the moves to dampen the chances of anyone staying away and once a trio went clear that was it. B&B Hotel’s Quentin Pacher had a go later on but was reeled in. So we got the first ever bunch sprint into Carcassonne and Mark Cavendish got his fourth stage in the race and his 34th career Tour stage. The finish was more ragged than usual, accumulated fatigue plus a big crash took out several riders and so there were no big trains. DSM tried a late surge like they were doing last year but DQS held them off and for a moment it looked like Michal Mørkøv was going to win the stage before Cavendish launched and, hunched low over the handlebars, surged to the line.

The Route: 183km into the Pyrenees and almost 3,000m of vertical gain. This is an intriguing route using lesser-known roads in the Pyrenees including several passes climbed for the first time by the Tour. After a flat start out of Carcassonne there’s a small climb to Montréal (yes Montréal like Canada, literally “royal hill” and there are many in France, there’s even an association of towns called Montréal in France of which today’s one is a member) but not much, just a point for the big ring sadists to try and create a break. The road continues and often with good visibility, riders can keep a breakaway with a small lead insight.

The Col du Bac is the first marked climb and a regular ascent on a big road and the descent is alright too, just with some wide hairpins. Then it’s along the Hers valley and to Lavelanet for the intermediate sprint, the town known in France for its famous goalkeeping son. Soon after comes the steeper climb towards the Montségur castle, 4km at almost 9% but on a big wide road. The climb is like a gateway, cross it and it feels like you’ve gone from the foothills into the mountains. The Croix des Morts is another steady climb, no surprises but no descent either as it leads to a plateau. After a while there’s a sudden descent and the road gets narrower.

The Col de la Serre, labelled the Côte de Galinagues, is a scenic backroad chiselled into the side of the cliffs and begins with a sharp corner and a narrow bridge and over two kilometres at 9% and then some narrow roads over the top. The unmarked Col de Campérié is a gentle main road. The last climb is the Col de Saint-Louis, 4.7km at 7.4% but with a middle part at 9-10% before reaching the fun spiral bridge to help gain altitude for the pass, readers who are familiar with the Sa Calobra climb will recognise the engineering here. From here it’s not far to the top.

The Finish: the descent is more gentle not too technical but one of those places where it’s hard to chase back: neither steep and twisty enough to reward risk-taking, nor flat enough for a powerful rider to know they’ll mow down a lone climber ahead. The final kilometre is flat and with a gentle left hand bend, but gentle bend more than a corner.

The Contenders: today’s stage is accessible to a lot of riders as the climbs are shorter in duration so it’s a breakaway lottery day. The archetypal winner is Julian Alaphilippe (Deceuninck-Quickstep) but he’s been burning matches like a bored teenager, as well as helping pull back breakaways so his energy levels won’t be high. Some riders are on GC duty for leaders which reduces the picks too.

Toms Skujiņš (Trek-Segafredo) can handle a hilly day. Magnus Cort (EF Nippo) can too and packs a good sprint and maybe Michael Valgren and Ruben Guerreiro too, all riding on the roads of their team mate Simon Carr who apparently rode the entire stage on 21 December last year. Bahrain have gone quiet of late but Dylan Teuns and Matej Mohorič come to mind for today. DSM are getting a dunking in the Dutch press of late with talk Søren Kragh Andersen is a DNS. Thomas De Gendt (Lotto-Soudal) used to be the breakaway king by brute force, can he finesse a win today? Wout van Aert (Jumbo-Visma) is an insurance pick, tomorrow is too mountainous so today suits if he can get in the break. Otherwise there are more riders capable of getting in the break and over the Col de Saint-Louis, take your pick…

TV: the start is at 12.15pm and the finish is forecast for 5.00pm CEST. Tune in to see the fight for the breakaway and stay for the scenery of these Pyreneean backroads.