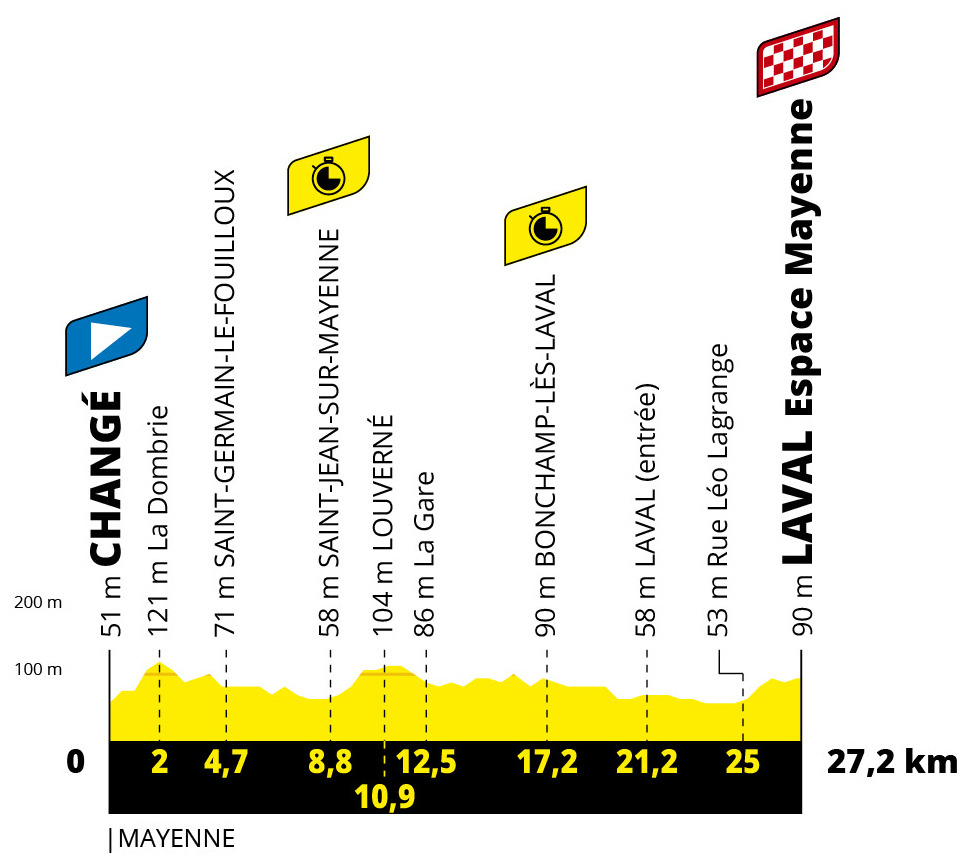 A big day for the GC contenders, today’s time trial will reshuffle the pack of cards with the kings and aces coming to the fore.

Fou, fou, Fougères: we’re only into the opening bars but this Tour keeps plucking at the heart strings like a flamenco guitarist. The day before spate of grisly crashes meant few spoke about Tim Merlier’s win, now not one injury and Mark Cavendish’s win in Fougères seems to make it the most important event to happen in town since Balzac stayed to write a novel.

We’ll get to Cavendish’s win in a moment but let’s note the protest by riders at the start of the stage, a gesture but no rider came forward to say what their concerns were to the cameras, the helicopter shots showed plenty of riders urinating, as riders wanted to empty their bladder more than get something off their chest. And then it was over. Hopefully something constructive can come of this, improved dialogue. 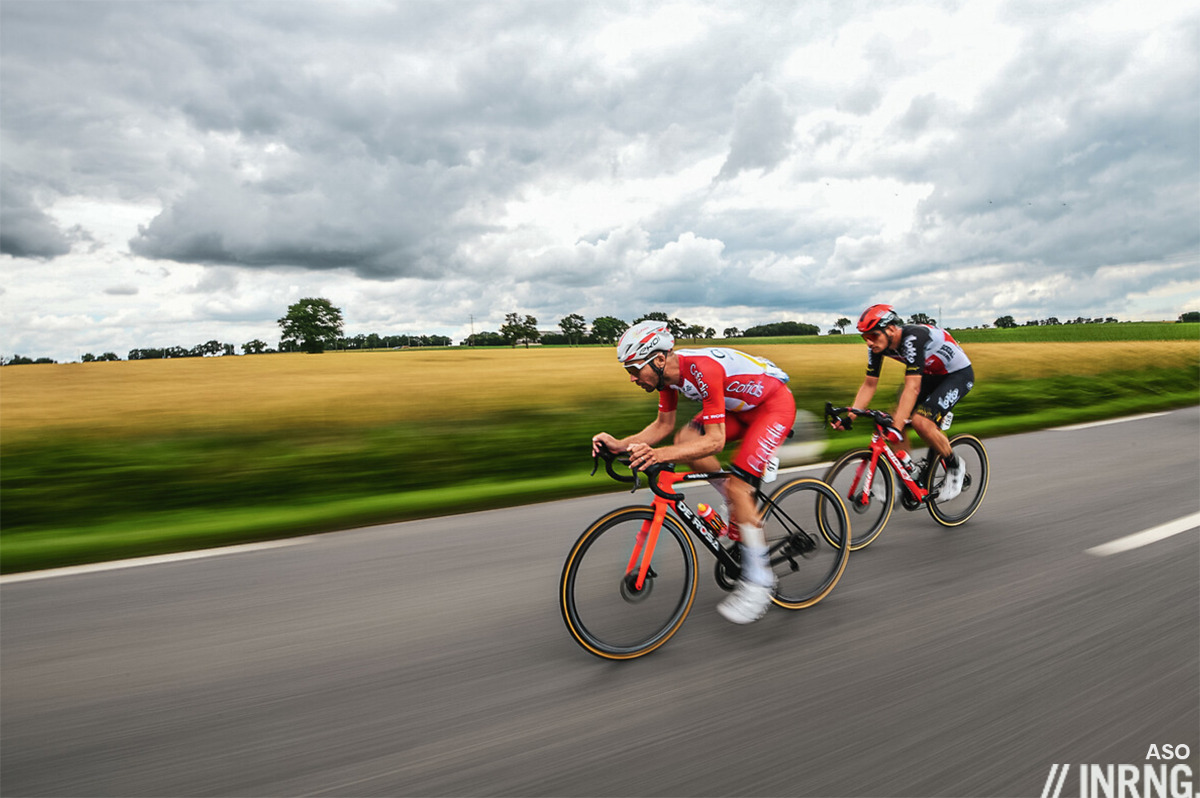 Brent Van Moer and Pierre-Luc Périchon attacked with the hallmarks of a fruitless “commercial break”, Cofidis racing like they’re still a Pro Conti team and Lotto-Soudal doing something in the wake of Ewan’s exit. Yet Van Moer gave it more, went solo and behind the peloton had a stand-off with 10km to go. The Belgian had won a stage of the Dauphiné a month ago in the same scenario and the suspense rose. But the day’s fairytale had a different script, one that included Sam Bennett clattering his knee a few weeks ago. Van Moer would be caught but just and Cavendish rounded the stalling Lotto rider with millimetres to spare as he dashed for the line. This was the Cavendish of old, the “Mozart of the 11 sprocket” and he had a late kick to win by a bike length. He can retire now, not today of course as there’s Châteauroux tomorrow. No, the blank years at Dimension Data and Bahrain culminating in a DNF at De Panne, a Belgian seaside resort on a grey day in October and the prospect of a backdoor exit from the sport, that’s all gone. Cavendish is back on the stage and played an encore. He can do another and if cycling has a furious tendency to bank wins and within minutes ask what a rider can do next… well Cavendish is in the green jersey. 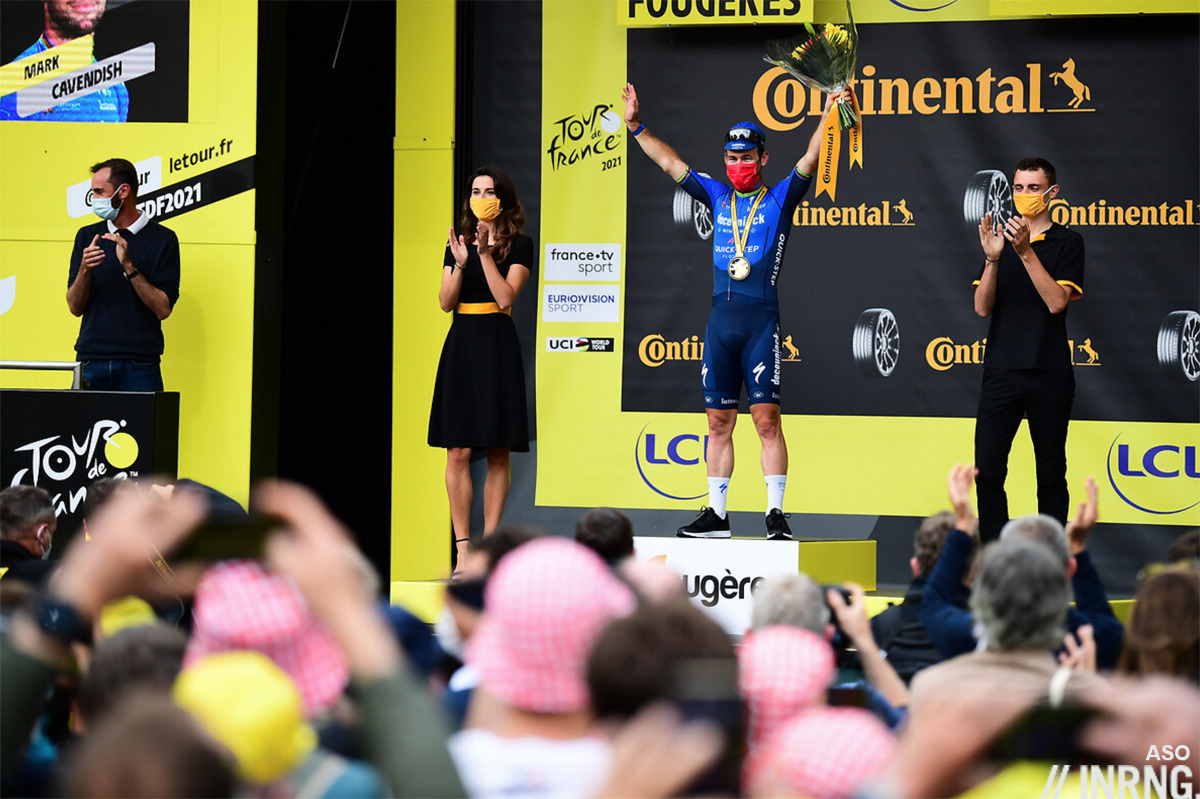 The Route: It’s 30km and a rolling course, twice as long as the Dauphiné’s TT stage last month with the same amount of climbing. There’s no obvious climb, instead a series of rises and falls to be mastered but the start out of Changé has one of the longest drags, a kilometre at almost 6% which needs to be carefully paced. It pays to know the course well to gain every second, do you stay in a big gear and use momentum to get over the next rise, or change down? There aren’t too many technical points, it’s got a lot of straight roads and has a flatter feel to the second half, the pure TT specialists and those with the most aero positions can recover time. With 2.5km to go there’s a tight bend away from the river bank and a short kick upwards that eases but doesn’t quite flatten out for a while. It leads to the finish outside the Espace Mayenne, a newly built concert hall and sports arena that has a outdoor velodrome, so new that it’s not quite finished 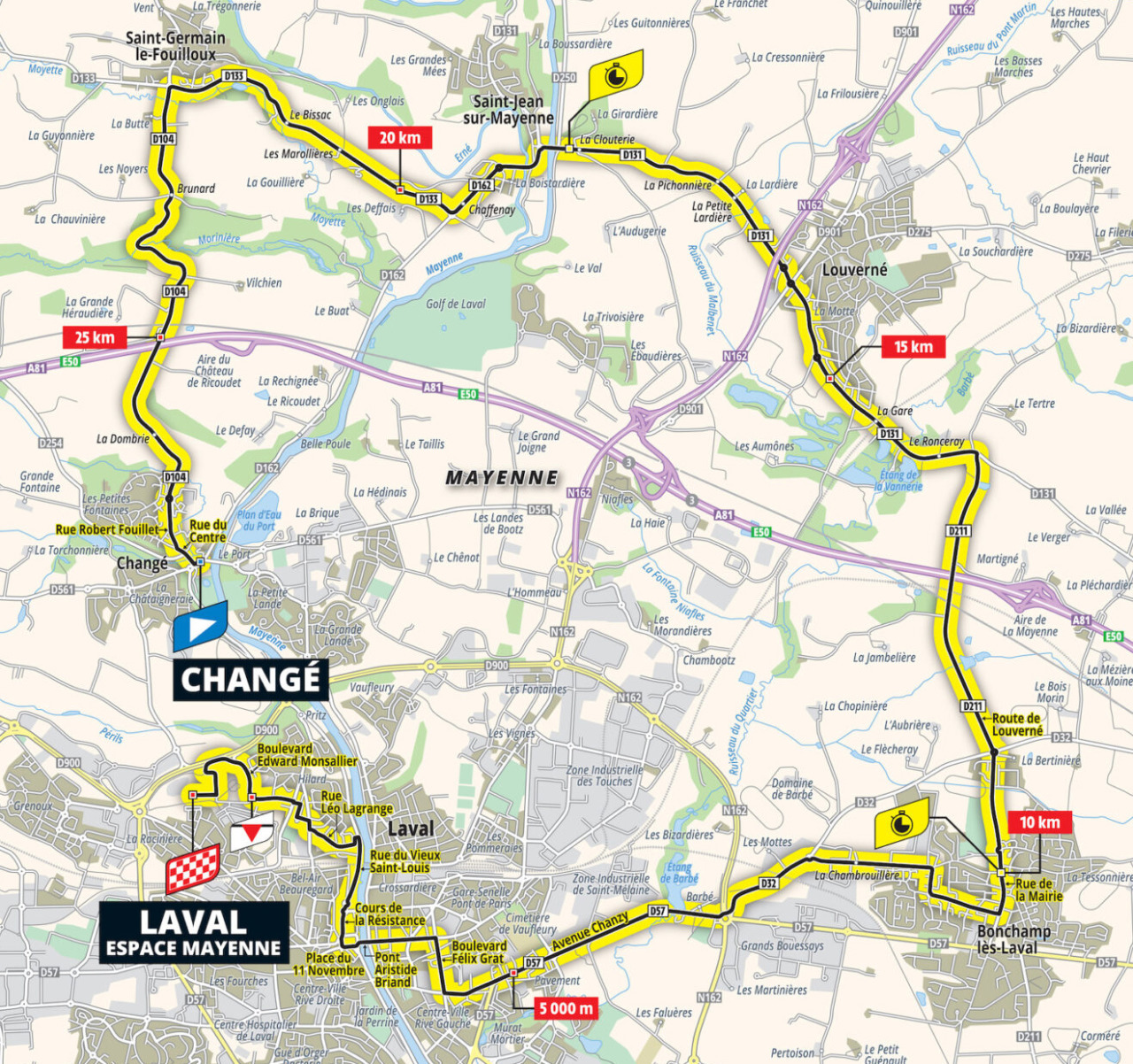 The Contenders: let’s tour the specialists first. Kasper Asgreen (Deceuninck-Quickstep) has a good chance today, third in the Dauphiné on a hilly course, today’s the course suits his big power. Two Swiss riders in Stefan Küng (Groupama-FDJ) and Stefan Bissessger (EF Education-Nippo) are the specialist contenders, Küng won the Tour de Suisse opener but just and perhaps took more risks plus he’s been doing more work so it looks like advantage Bississger. Søren Kragh Andersen (DSM) can surprise but probably needs a more daredevil course. Astana had a 1-2 in the Dauphiné with Alexey Lutsenko and Ion Izaguirre but today’s course isn’t as technical nor hilly so they could be close. Wout van Aert (Jumbo-Visma) has been avoiding the sprints to save himself for today but sits just fourth overall at 31 seconds. Max Walscheid (Qhubeka-Nexthash) is becoming a time trial specialist but a win is an upset. UAE have two outsiders in Mikkel Bjerg and Brandon McNulty.

Among the GC riders Julian Alaphilippe (Deceuninck-Quickstep) has won a Tour time trial but that was behind Pau in the Pyrenean foothills, a stage win is going to be tough. But the form is there, so much so that when he rode the Tour de Suisse earlier this month he did the final time trial on standard road bike out of politeness because he planned to leave the race to attend the birth of his son and so he couldn’t really win that day and back on his TT bike he’s got a shot at yellow if he can take back eight seconds on Mathieu van der Poel (Alpecin-Fenix) and hold off van Aert. MvdP is good at everything but he’s never won a time trial although he can be close, he’d really prefer a more technical course with ramps to sprint up and corners to carve.

Wilco Kelderman (Bora-Hansgrohe) is under the radar so far but looked spritely at Mûr de Bretagne. Normally Primož Roglič (Jumbo-Visma) would have been a big pick for today but he must be smarting from his crash, just avoiding a further time loss to rivals would be a small victory. The same for Geraint Thomas (Ineos). Tadej Pogačar (UAE Emirates) won the last time trial in the Tour but there’s no mountain-top finish today, he can be very close. Rigoberto Uràn (EF Education-Nippo) is one to watch to see if he can confirm the ride he did in the Tour de Suisse where he won the mountain time trial to Andermatt.

Weather: sunny but with clouds building and the outside chance of rain, 20°C and a light NW wind of 10km/h.

Off on a tangent: today’s stage is in the Mayenne department, and in the world of French cycling this equals the Boucles de la Mayenne, (the first stage race won by a certain Mathieu van der Poel), Laval as the birthplace of Jacky Durand (the 1990s version of Thomas de Gendt and today chez Eurosport), and the Madiot brothers Marc and Yvon who run the Groupama-FDJ team. They’re from Renazé and for years they’d hold the team’s annual training camp, making riders take part in cyclo-cross drills, you might remember the video of Bradley Wiggins wiping out in the mud. Today Marc lives in the Parisian suburbs and his wife Jennifer runs a Breton bistrot. Apparently Marc sometimes staffs the bar. Restaurants and bars have had a tough time because of the pandemic so if you happen to be in Suresnes one day, try the Pourquoi Pas on the Place Henri IV.