Book Review: A Cyclist’s Guide to The Pyrenees 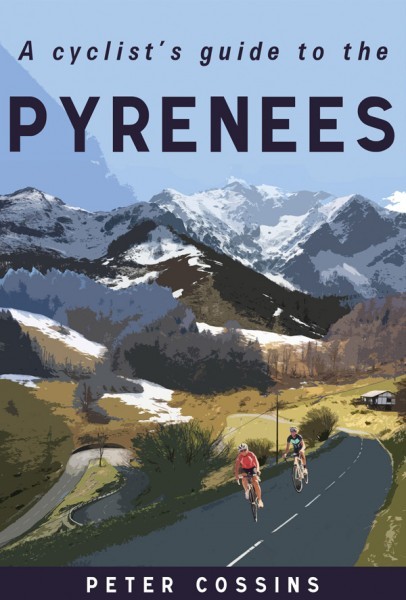 A Cyclist’s Guide to The Pyrenees by Peter Cossins

The Pyrenees stretch from the Atlantic to the Mediterranean but chances are if you asked cyclists to name the famous climbs they’d pick a few like the Tourmalet, Soulor, Aubisque or Luz Ardiden. All good but they’re all French and within a narrow central band of the this large mountain range, there’s more to discover, and on both sides of the Franco-Spanish border. This book is a very practical guide.

You might have some concerns about James Hilton’s 1933 novel Lost Horizon and the Frank Capra film version from 1937 but the idea is that hidden behind a mountain somewhere there’s a lost paradise: the Shangri-La. Alas there are no unexplored parts of the Pyrenees but there are areas out of mind in the road cyclist’s psychogeography. The book starts on the Mediterranean side and picks out the Galamus gorge as the first ride:

“This route may not feature any noted cols, but in less than 50km it packs in more natural and historical splendours than almost every other ride in this guide”

A bold claim but it try it for yourself. Take the D7 road north out of Saint-Paul de Fenouillet and there doesn’t seem to be anything special ahead as you climb past the vin-de-table vineyards. Until suddenly you round a corner and you’re on a tiny road cut into a breathtaking cliff that could not be imagined minutes before, how did this happen? Luckily if the book starts with a gem like this there are more than 120 suggestions to browse, ranging from 35km to 190km with lots of detail and intrigue. The routes are suggestions and often overlap so you could link them together to make a longer loop. 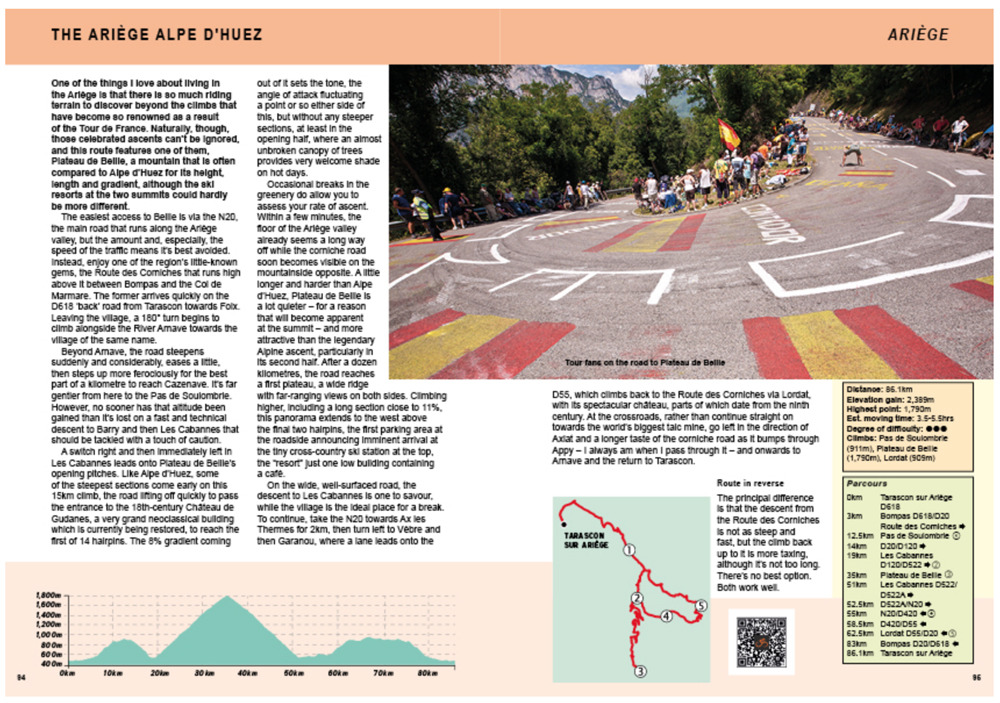 Each ride has an identical format with text and the accompanying route profile, map, a photo and a a barcode. The book comes with QR codes which you can scan to summon routing files for a GPS bike computer.

“A book? I can use mapping software for routes”. The text is full of knowledge which is what makes the book so useful. Sure Strava’s Heatmap shows where cyclists pass but this is partly a function of the number of cyclists around, just as a food heatmap would show how popular supermarkets and McDonalds are, when you might prefer something with a local flavour instead during your travels. Here’s one detail:

join the D115, which climbs into woodland at Grailhen as it tracks northwards towards Lançon. There are alternative routes northwards in the bottom of the valley, but I prefer the tranquillity of this one, even though it does add 150 or so vertical metres to the total

Yes it’s in English and published in the UK but the author lives in the Pyrenees and it reads like it was researched and produced on the ground. It’s like having a local guide.

So far so good. But note two things, this is very much a ride guide for road cycling although there are some gravel suggestions in places. It’s also very practical, a handbook with factual details on the climbs, descents and roads in between, don’t buy this expecting the gloss and glamour of a coffee table book.

The Verdict
Detailed and thorough, this is a guide for anyone planning a road cycling trip to the Pyrenees, whether it’s to tackle the Tourmalet, amble around Andorra or galavant about Girona. If that’s you, then you might have some famous climbs in mind already but this should give advice and choices. Even a local who knows their patch in the Pyrenees would do well to explore other parts with the help of this book.