A trip to the seaside for a sprint finish. 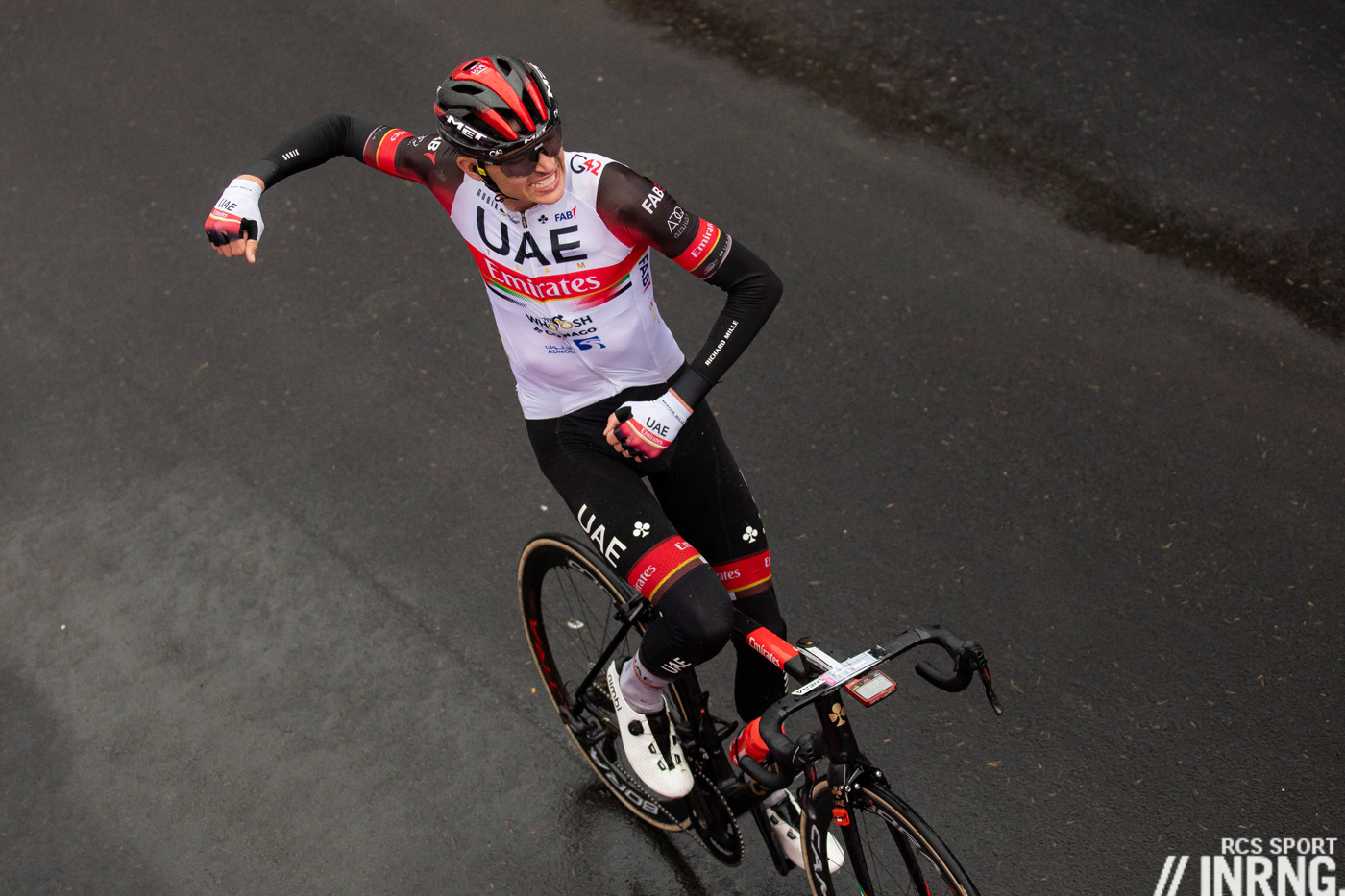 “You don’t go in the breakaway because someone told you to, because you have to. Or rather if this is the case it ends up being sterile, it doesn’t reward you with much. But if you put something into it, people take notice. This is what makes my job meaningful: the people who felt joy, or anger, those who noticed you did something. Those who write telling that they dreamed and suffered along with you. Mark my words: I won’t be at the top of the victory rankings, but if many remember me and my breakaways, this is worth more than a millionaire contract.”
– Alessandro De Marchi, in “Vie di Fuga” by Bidon (translated), published by People.

Under a downpour a group of 25 riders forced their way clear on the plains. Groups this size are problematic because some can lurk and soft-pedal, others spot this and soon there’s no cohesion. Only the slippery descent from the Castello di Carpineti intervened before the riders had to start making moves and Bike Exchange’s Chris Juul-Jensen plus Intermarché pair Quinten Hermans and Rein Taaramäe got a gap. They pressed on and, thanks to Hermans’ work, their lead that reached almost two minutes before coming down to a minute by the start of the final climb as several riders chased. Of them Alessandro De Marchi was working the hardest as he knew the maglia rosa was in reach and his face was a picture of grinta on Colle Passerino. Joe Dombrowski was the only rider able to follow De Marchi and normally an elegant rider who mills up long climbs, the American was much more forceful but it worked, he placed a well-timed attack to get in the lead and stay away for his first pro win in Europe. With this two breakaway artists got the rewards they hoped for. 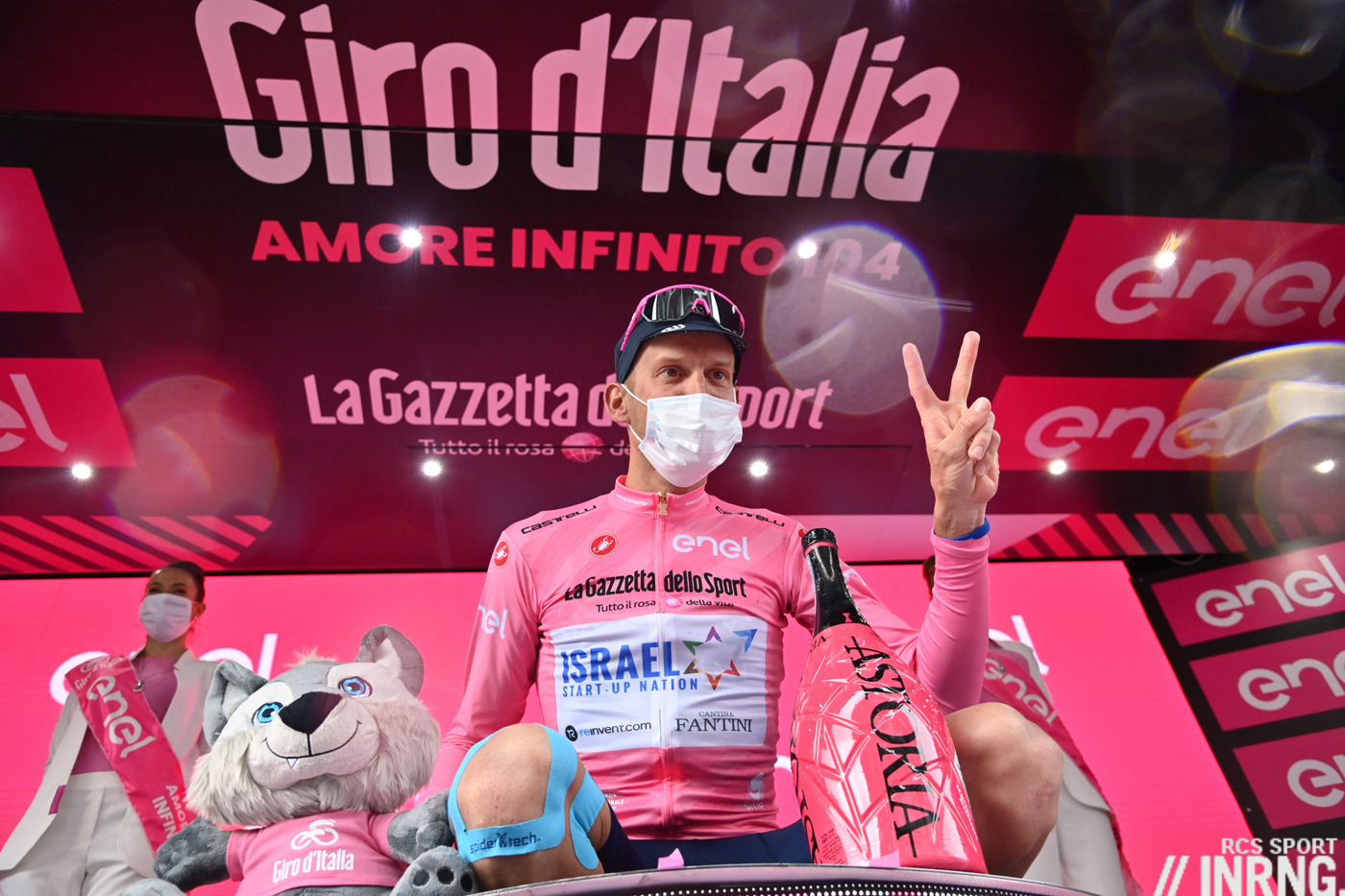 Back down the hill Giulio Ciccone attacked the shrunken GC group. Then Mikel Landa launched and only Aleksandr Vlasov, Hugh Carthy and Egan Bernal could follow. The quintet kept a small 11 second advantage at the finish line but landed a big psychological win as they could ride away from the rest. Still, this was a short climb at the end of a wet day when some can have legs petrified by the cold. If Bernal looked easy and his stock’s rising we know the big question for him is how his back fares the longer the race goes. George Bennett lost a minute and a half and João Almeida who lost four and a half and will be looking for new goals. 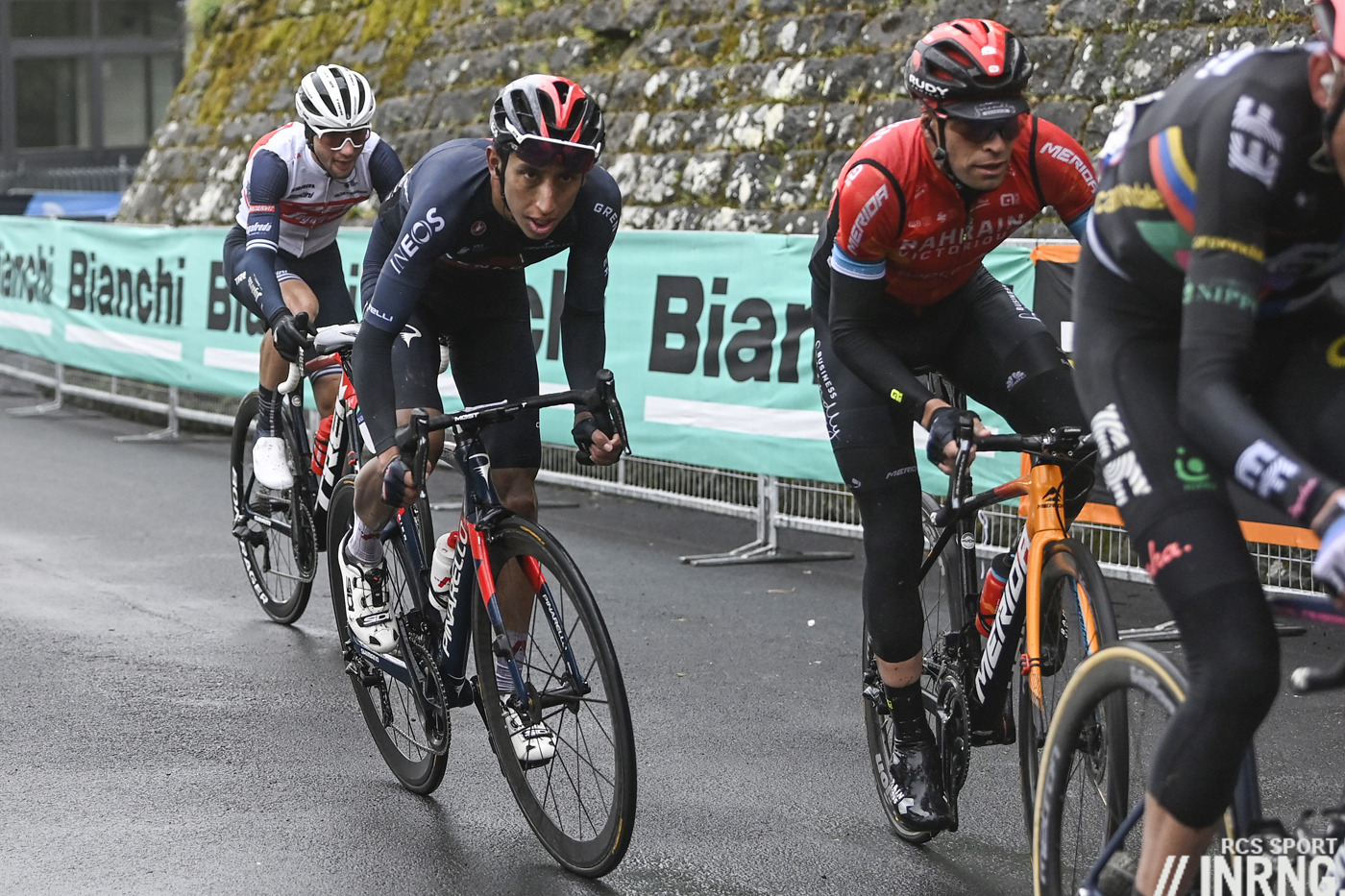 The Route: flat and a straight line, a route takes most of the ancient Via Aemilia before crossing the Rubicon and then reaching Rimini where the race twists around the town before a trip down the coast to Cattolica.

The Finish: the mayor gets their money’s worth with a tour around town. There are some narrow roads and sharp corners, the kind where it could pay to be near the front early as it’ll be harder to surge past. It’s still on boulevards and through a beach resort, don’t get images of riding through a medieval town, instead the route is just not as wide as Sunday’s finish in Novara, and the corners are sharper. Once under the triangolo rosso there’s one last right turn and then a 900m finishing straight.

The Contenders: we’ve only got one stage to go on but Tim Merlier (Alpecin-Fenix) has the best lead out train and team behind him and this could count but we’ve yet to see them boss the field. Caleb Ewan (Lotto-Soudal) doesn’t have such a strong train but there’s experience and he can still hope to surf the wheels to get into place. Fernando Gaviria (UAE Emirates) has good form too and looks to be a real contender again. Elia Viviani (Cofidis) is close but a harder pick. Dylan Groenewegen (Jumbo-Visma) has done his first sprint and with that done should have more confidence but today’s finish is more frantic.

Weather: a mix of sunshine and clouds, 20°C at most and the chance of a shower, especially towards the end. A light tailwind.

TV: the finish is forecast for 5.15pm CEST. It’s live on TV from the start but the weather’s calm and so tune in for the latter part to see the bunch dash through Rimini and the sprint.