Hoorn solo: a breakaway with the wildcard invitees that vibed doomed move but for once it stuck and Intermarché-Wanty’s Taco van der Hoorn won from it, a win to rekindle the hope of all those who stand on the pedals every time the flag goes down at the start of the stage. The breakaway of eight riders shrank to two by the climb to Guarane as Simon Pellaud and van der Hoorn went clear. They’d get caught, right? Only they still had a useful lead of a minute with 15km to go, the roads were twisting and few teams could chase on the descent. Van der Hoorn went solo with 8km left, it looked risky but in ditching Pellaud he only had his legs and the road ahead to worry about. Behind Bora-Hansgrohe had worked all day to chase and when UAE Emirates and Cofidis joined it was too late. This was the victory of an underdog and more, a modest team yet to win this year and a rider who was only signed late last year after Jumbo-Visma didn’t renew and nobody else had hired him following several seasons blighted by big injuries, he was going to ride for the BEAT Cycling in cycling’s third tier before Wanty called. Even van der Hoorn looked like he didn’t believe it as he looked the finish arch looming over him. 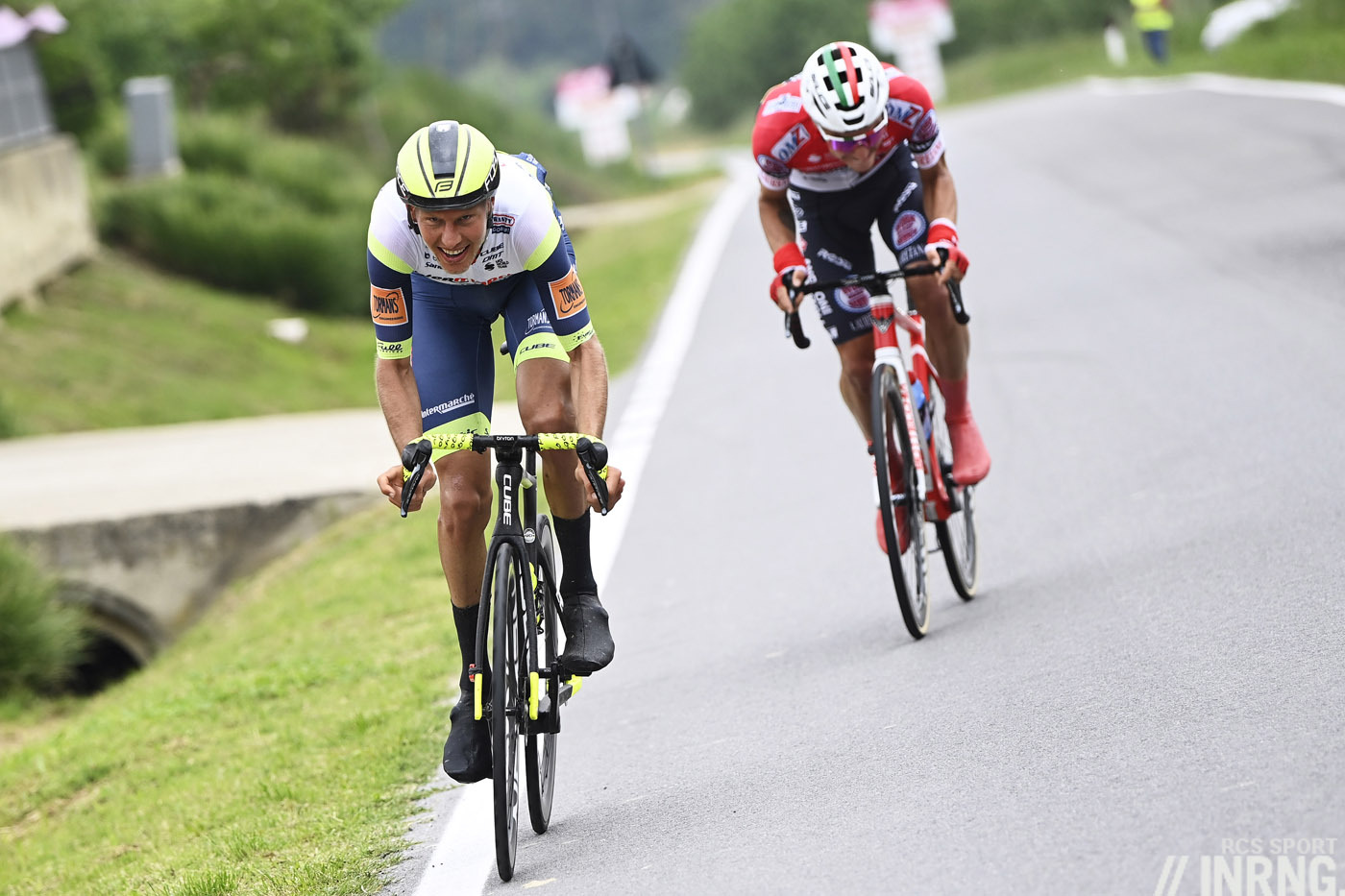 The Route: into the Apennines and over 3,000m of vertical gain. It’s not an Alpine day but it needn’t be for a first Tuesday in a grand tour. But all that climbing is concentrated in the last 100km and on hard roads that rise and fall, twist and turn as the race heads into Parmigiano Reggiano country.

Things get serious with 77km to go and the freshly-resurfaced climb to the ruins of the Castello di Carpineti, it’s got tight hairpins and is over 10% for the last two kilometres and chased by a fast descent down the valley. The next climb to Montemolino has a gentle start but later on flicks on to a tertiary road behind Palagano with some very steep S-bends.

There are many ramps and among them two big unmarked climbs, presumably RCS didn’t want to offer too many mountains points too soon on one day but Mocogno and then especially Montecreto go uphill via hairpin bends and are significant climbs that add to the vertical gain in the finish.

The Finish: a fast descent through Sestola into Fanano with some tight bends lined with barriers. Teams will fight for position and team cars will burn rubber to stay in contact and in town there’s an uphill intermediate sprint with 3-2-1 seconds. 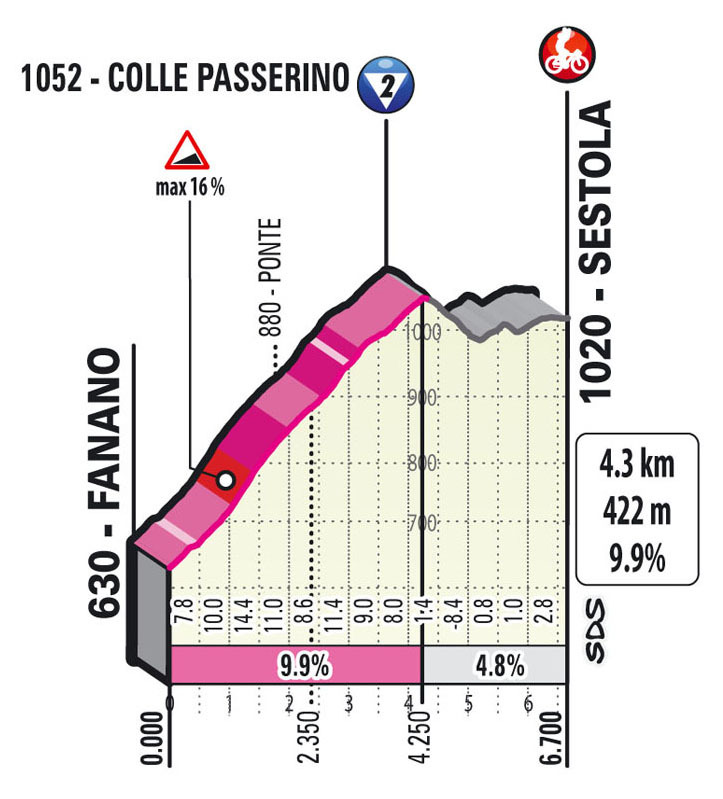 Then it’s on to the climb to the Colle Passerino. It is 4.3km at 10% and at first a regular road out of town but starts to bite quickly.  A rider 20 places back here will have to make a big effort just to move up and it’s the first uphill test of the GC riders. At the top of the pass it’s onto a bigger road and a fast descent into town with a small kick up to the triangolo rosso and then a run through town.

The Contenders: can a breakaway make it? We don’t have the obvious ingredients like a climb at the start, nor are lots of riders down and out on GC although Simon Carr (EF Education-Nippo), Felix Großschartner (Bora-Hansgrohe) and Thomas de Gendt (Lotto-Soudal) lost 10 minutes yesterday but they’ll have their work cut out to get into a move and then help keep it away.

The Passerino climb is steep but not a summit finish and it’ll be hard to go solo over the top and stay away. So who can win from a group in Sestola? João Almeida, Fausto Masnada and Remco Evenpoel and that’s just from Deceuninck-Quickstep. Pello Bilbao (Bahrain) has a fast finish too. Simon Yates (Bike Exchange) might win solo often but can be a clever finisher too. Dan Martin (Israel) can be quick too and if he attacks doesn’t have to be closed down immediately. A hilly course and bad weather, a good day for Marc Soler (Movistar). Giulio Ciccone (Trek-Segafredo) has won in Sestola before but that was in his Bardiani days from a breakaway, winning against the names cited so far is a much bigger ask even if he’s improved plenty since.

Weather: cold and wet, a top temperature of 12°C and some wind from the south gusting to 30km/h.