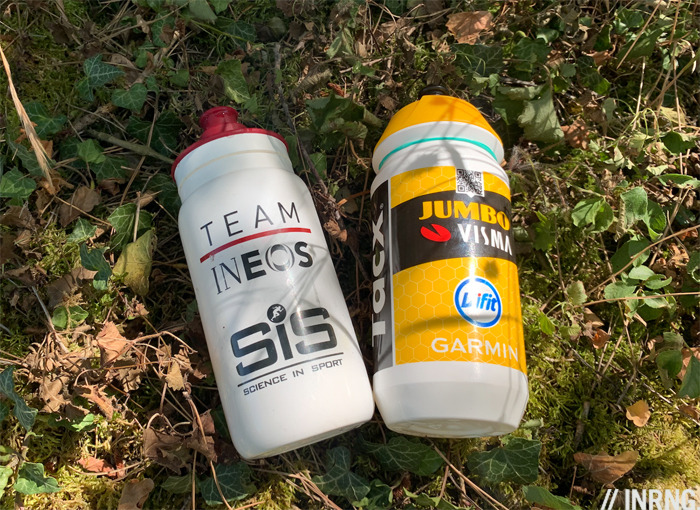 The new rules against littering surprised some over the weekend, with the case of Michäel Schär being disqualified from the Ronde van Vlaanderen for throwing a bidon to waiting spectators provoking outrage online. However the incident with Kyle Murphy in the GP Miguel Indurain could be the real cause for concern.

It pays to read the rules as there’s still an easy way to gift bottles to spectators. The good news is that away from hiccups adjusting to the new rules over a weekend cycling is finally resolving its litter problem.

The surprise is it was a surprise given that the rule was announced over winter. The peloton knew and Schär seemed to realise his mistake as soon as he’d made it but it’s caused outrage on social media – whatever next? – but behind this ought to be a a good news story because the prize of the sport being seen to clean up, at least for one environmental angle, ought to be worth more than a few gifted bidons, more of which in a minute.

The new rules are a continuation of policy and nothing to do with Covid. ASO started with waste zones a decade ago, the UCI formalised with dedicated waste zones rules for 2015 but they lacked both carrot and stick: not enough zones, not enough penalties so riders kept littering, only millions were watching on TV and the image looked terrible.

The danger here is to confuse one weekend’s adjustment and accompanying noise with the rule being quietly accepted by most overnight. The peloton adapted well, aided the obligatory deployment of regular waste zones by organisers. You could see the difference watching the Tour of Flanders and it shouldn’t take long for things to become second nature.

The actual rules bit
The outrage is because there’s no distinction between littering and gifting a souvenir, we can all tell the difference between a rider throwing a used bottle into the countryside and throwing it to a crowd who might want a souvenir, right? Only the rule makes no such distinction, there’s no grey area about gifts or good intentions. Here’s the rule screengrabbed and cropped in two parts, first the general rule (NB red ink signals new wording in the UCI rulebook so users can track changes):

and now the specific offence and the punishment from the disciplinary section of the rulebook, the part which the commissaires use: 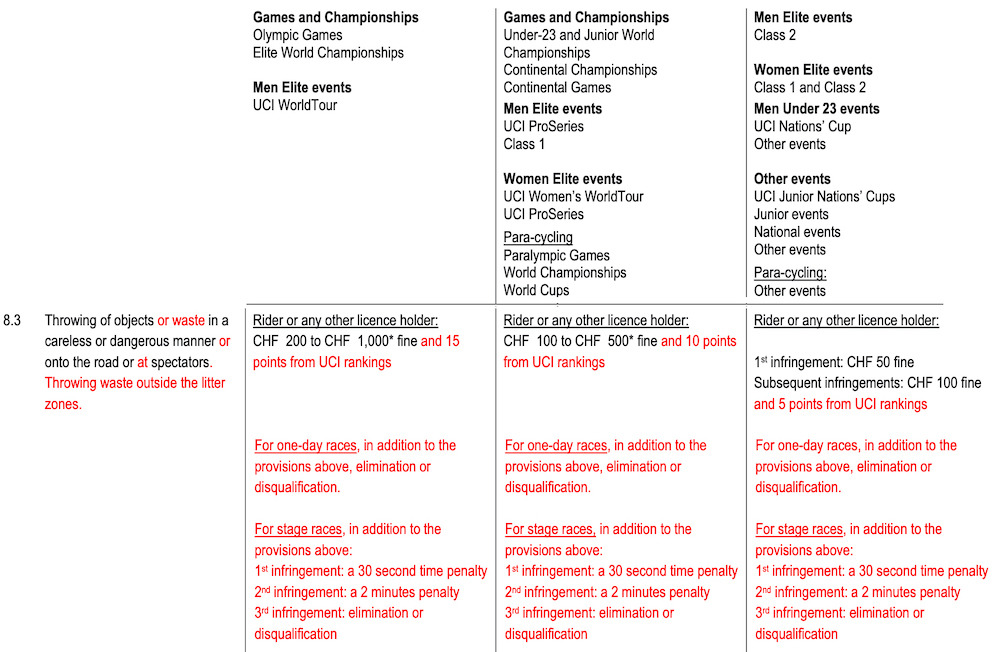 One section uses the verb “jettison”, the other “throw” but as you can see, it’s concise, unambiguous and Draconian. There’s no first warning, no slapped wrist. Instead a massive deterrent, disqualification in a one day races, a hefty time penalty leading to disqualification for a third offence in stage races. Now littering has never been allowed and previous penalties like Swiss franc fines did nothing, after all they got netted off prize money and so the riders in question never had to open their wallet and unless they studied the post-race communiqué probably didn’t even know they’d been cited.

Give, don’t throw
On the subject of clarity, let’s note the “no throwing” rule as there’s nothing to say a rider cannot hand over a bottle to a fan. Not for Michäel Schär at 45km/h in the Ronde, but easy on a climb or a quieter moment. 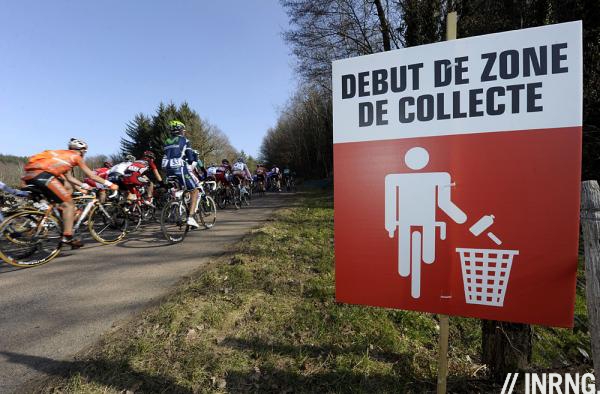 This doesn’t make cycling a green sport overnight but at the stroke of a rule change a problem can be solved here making it an easy win, both visually for TV viewers and for the landscape in which the races are run. Once the peloton has stopped slinging waste into the countryside the dedicated waste zones are fixtures then the commissaires may go easy on a rider who chucks a bottle at a crowd.

Murphy’s Law
So far, so good but it was another incident at the weekend that ought to be a concern. In the GP Miguel Indurain Kyle Murphy claims he accidentally dropped a gel wrapper and was disqualified. It’s one thing to punish a rider for a conscious act of littering or throwing a bidon but dropping a gel can be accidental, imagine the rider who reaches for one out of their pocket, hits a pothole… and they’re disqualified or in trying to pull a gel out of a jersey pocket a used bar wrapper gets pulled out as well and flies away in the breeze. Here we get into semantics, is dropping something by accident “jettisoning” or “throwing”? Probably not but just as the riders need to know the new rules by heart, the commissaires have to be sure too. Otherwise things could get very messy.

Previous post: The Moment The Ronde Van Vlaanderen Was Won