Into The Waste Zone 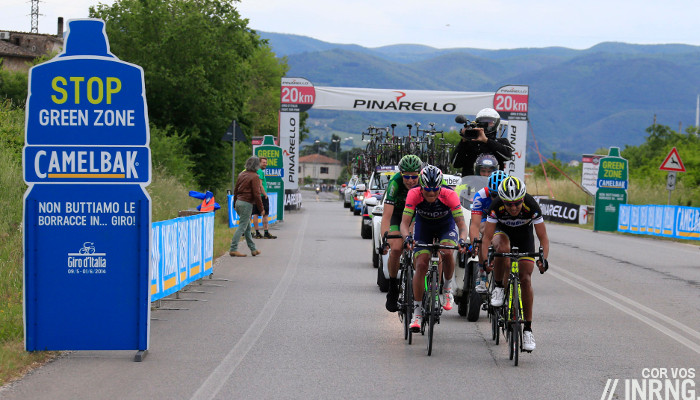 The pro peloton’s existence is predicated on imitation. You can buy the same bike as the world champion, you can have the same clothing as the yellow jersey. “What the pros ride” is the sporting equivalent of “as seen on TV”.

There’s one aspect nobody should be copying: the practice of slinging used bottles, wrappers and other waste into the countryside. Time after time riders hurl their empty food packets away. This might change in 2015.

Gel wrappers thrown aside by riders are an environmental problem we all should address. (And yes, I know there are other serious issues!).

New for 2015 is a UCI rule demanding “waste zones”, an amendment to an existing rule. The extra wording is in bold:

2.3.026 In other events or stages the organisers may also provide food and drink in areas set aside for that purpose. The feeding zones will be signposted. They shall be of sufficient length, to allow supply operations to proceed smoothly. Each feeding zone should be accompanied by a zone for waste situated just before and just after the feeding zone where riders can get rid of their waste.

Organisers should also have a waste zone of sufficient length situated before the final 20 kilometres of each race or stage where riders have the opportunity to get rid of their waste.

We’ve seen this before in races, the image at the top is from the 2014 Giro. As far as I can tell the practice started in pro racing in March 2011 when ASO trialled a “collection zone” in Paris-Nice. This proved useful and two years later the scheme spread to other races including Tirreno-Adriatico. With RCS and ASO onboard a lot of major races are covered but now for 2015 it’s a requirement for every race that has feed zones, typically races longer than 150km.

Of course having a 50 metre long zone is one thing, using it is another. Some cities have trash cans but inhabitants still drop litter while others are spotless. It’s cultural. A rider might throw something on the ground because they’re in a race and it’s the “done thing”. But it shouldn’t be. Putting a wrapper back in a pocket seems so obvious, there’s no penalty other than sticky fingers and if you’re a pro, no worries because someone will wash your bartape and gloves in a few hours’ time. Just as a rider won’t won’t hurl food scraps off their balcony in Monaco, there’s no reason to drop an empty gel sachet on the road.

So how to change the culture? Well the UCI’s adding another new rule for 2015:

2.2.024 If waste zones are established by the organiser, the rider must safely and exclusively deposit their waste on the sides of the road in this area

That’s stipulating the only place to drop waste is in these zones. That’s better. However the penalty for breaking the rule is a measly UCI cash fine, maybe 50 Swiss Francs (€40) if caught. Perhaps fans should take part and if a rider is spotted littering, call them and the team out? Some have gone further. In 2010 Chris Froome was among several cyclists named by a Belgian environmental group for prosecution after being spotted littering during the Flèche Wallonne race. Nothing came of it but it’s a reminder that just because there’s a race on doesn’t mean riders can ignore local laws and customs.

Other solutions can include biodegradable packaging. Some teams do use biodegradable water bottles but at best these are going to take months to rot. Some team jerseys, plus the Le Coq Sportif leaders jerseys in the Tour and other ASO races, have extra pockets to put waste in.

Conclusion
Some races have employed waste zones, now they’re a requirement for 2015. But it’s one thing to provide these areas, another to ensure they’re used correctly. The stick of UCI fines doesn’t look very threatening, the fines are too light. Maybe instead it’s up to fans to watch what happens during a race and maybe for more education on younger riders?

Finally if you’ve been to a race and stood by the road, you might have choked on the fumes from the race convoy. A few plastic wrappers might not seem like much when set against the total pollution of a race. But improvement has to start somewhere and this is an easy fix if minds can be changed.