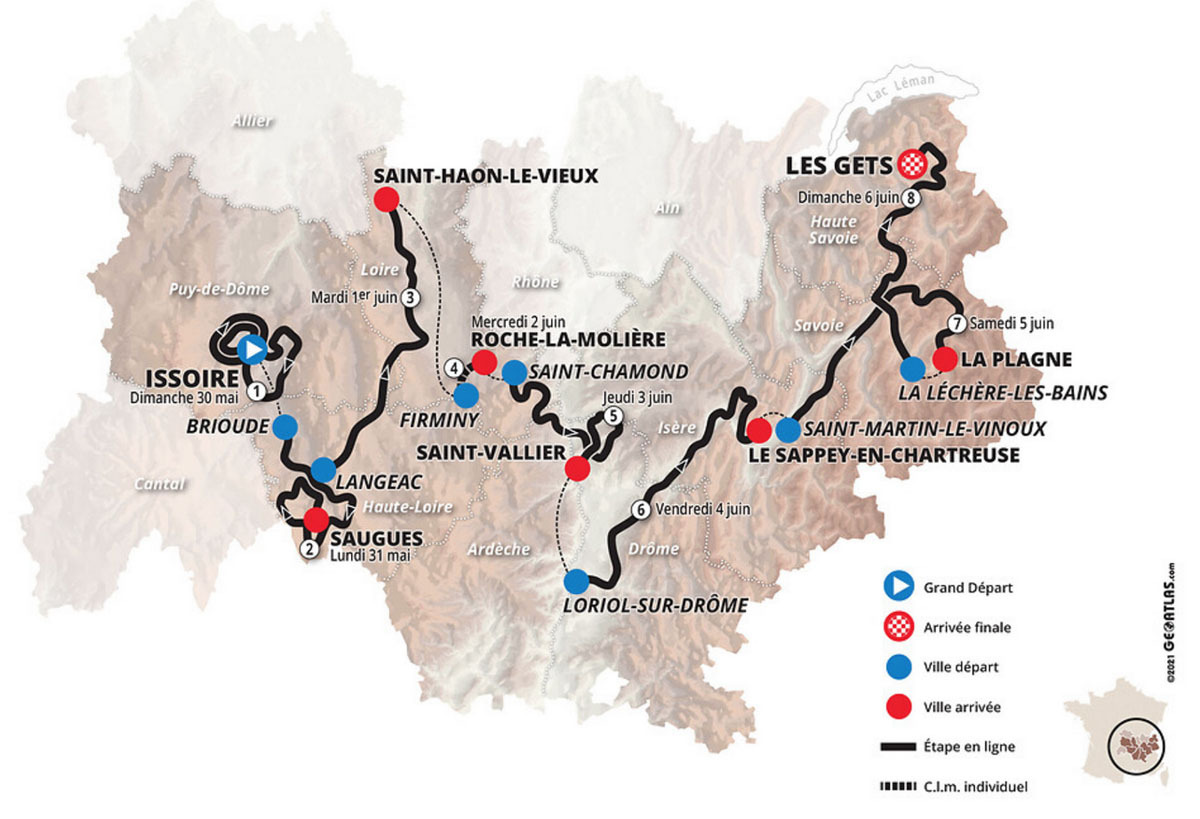 The route for the Critérium du Dauphiné is out. The race will be held between Sunday 30 May and Sunday 6 June and there’s little for the sprinters and plenty for the climbers. The final two stages look more tasty than any of the Tour de France’s mountain stages. Some notes on the route… 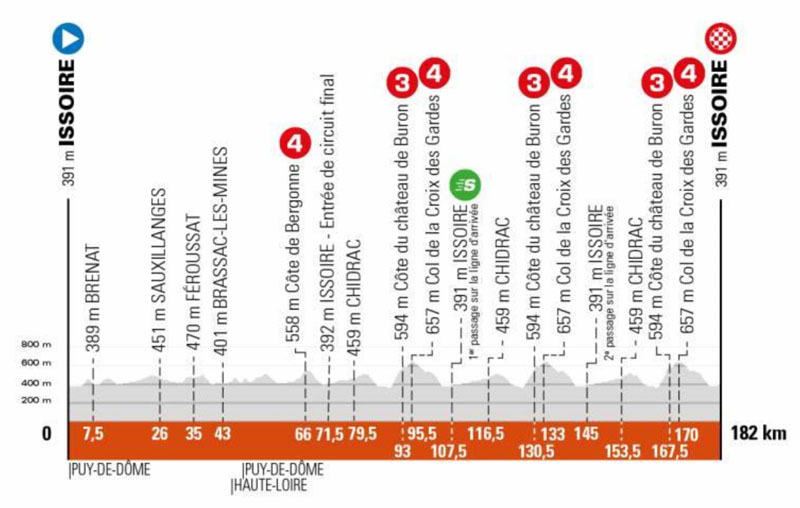 Stage 1 sees the race start with loops around Issoire, a mining town in the Auvergne region and Romain Bardet country although the new DSM recruit is more likely to be by roadside than in the peloton given he’s due to ride the Giro. It’s a hilly day and you can already see Wout van Aert winning here. 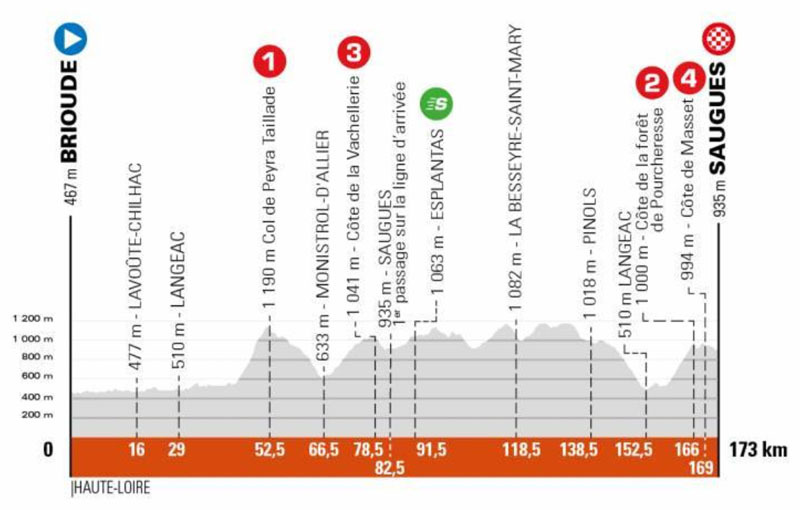 Stage 2 speeds towards the Col de Peyra-Taillade, climbed via the Mur de Saint-Bérain “shortcut”. If the name is familiar, it in the 2017 Tour de France, the day Ag2r took the fight to Sky and briefly had Chris Froome under pressure, before Bauke Mollema won the stage in Puy-en-Velay. Maybe you remember the images of Pierre-Luc Périchon zigzagging? If you remember the 1997 Dauphiné then you win the history prize, the climb was a novelty and had many riders walking up. But it’s all far from the finish and probably won’t be on TV either. Instead there’s a loop in the finish and a hard final climb in, climbing from the Allier valley to the Gévaudan plateau, it’s 7km at almost 7%, an Alaphilippe kind of finish. 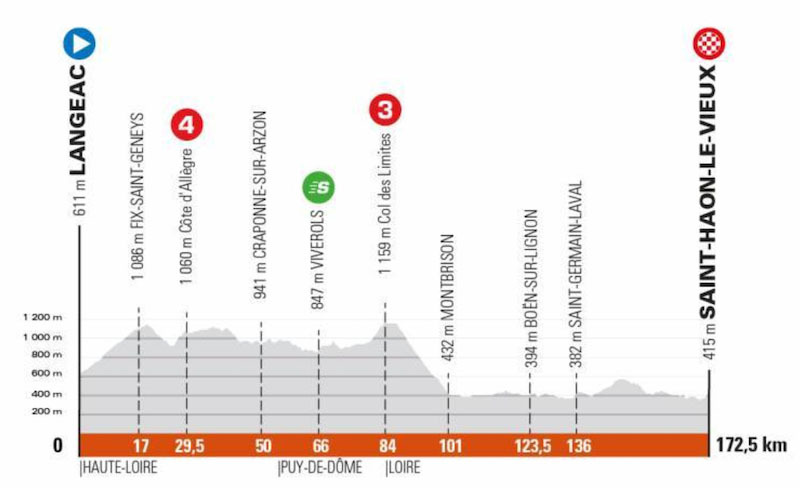 Stage 3 looks like one for the sprinters but going by the profile above but if you happen to be a heavyset sprinter then read on: the finish in St. Haon is uphill for the final kilometre. It’s no summit finish of course but the road does pitch up just enough to make things awkward for many of the sprinters, this is more of a van Aert-Sagan-Alaphilippe finish. 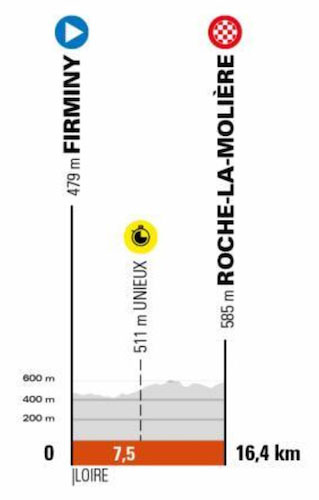 Stage 4 is a 16km time trial around the old mining towns and industrial towns of Firminy and Roche on the outskirts of Saint Etienne. The surprise is the brevity, this is no dress rehearsal for the Tour de France’s 27km and 31km TT stages but this way it’ll keep the gaps on GC closer. It’s hilly in places and should be a test of pacing and skill as much as raw power. 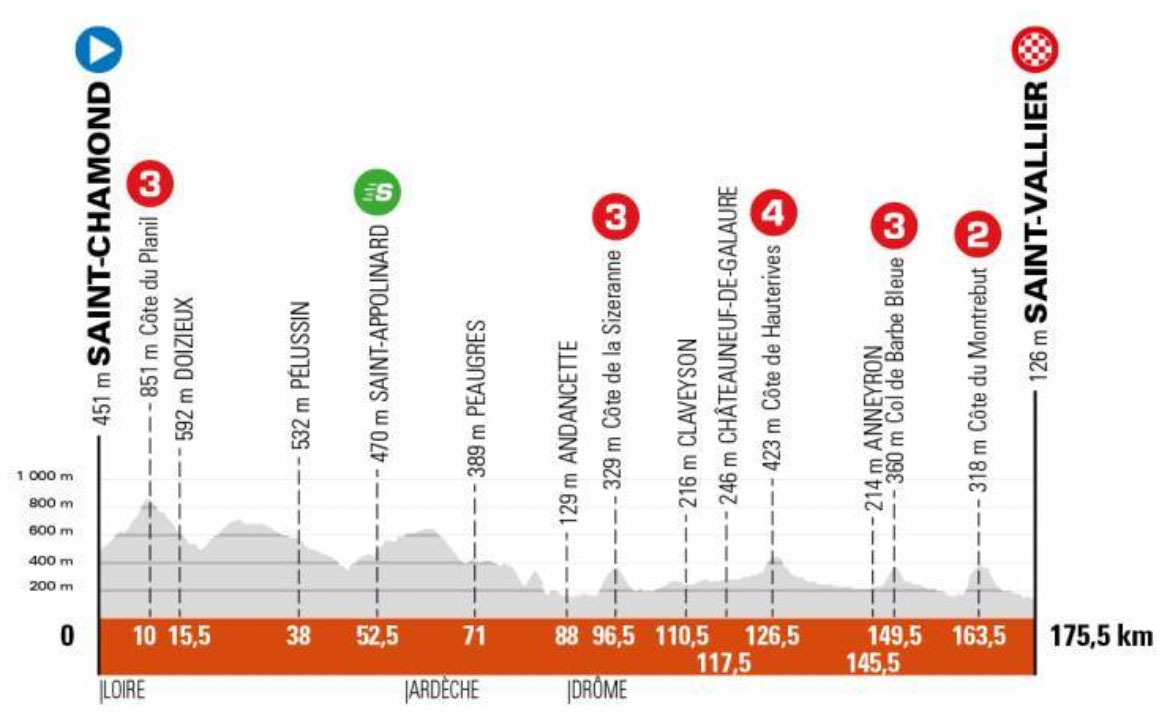 Stage 5 was going to happen last year but the race was shortened and this stage was lost. It’s back and awkward for the sprinters with the climb of Montrebut late in the race, a 1.3km “wall” that rises out of the Rhone valley, it averages 12% but there are moments at 20%. 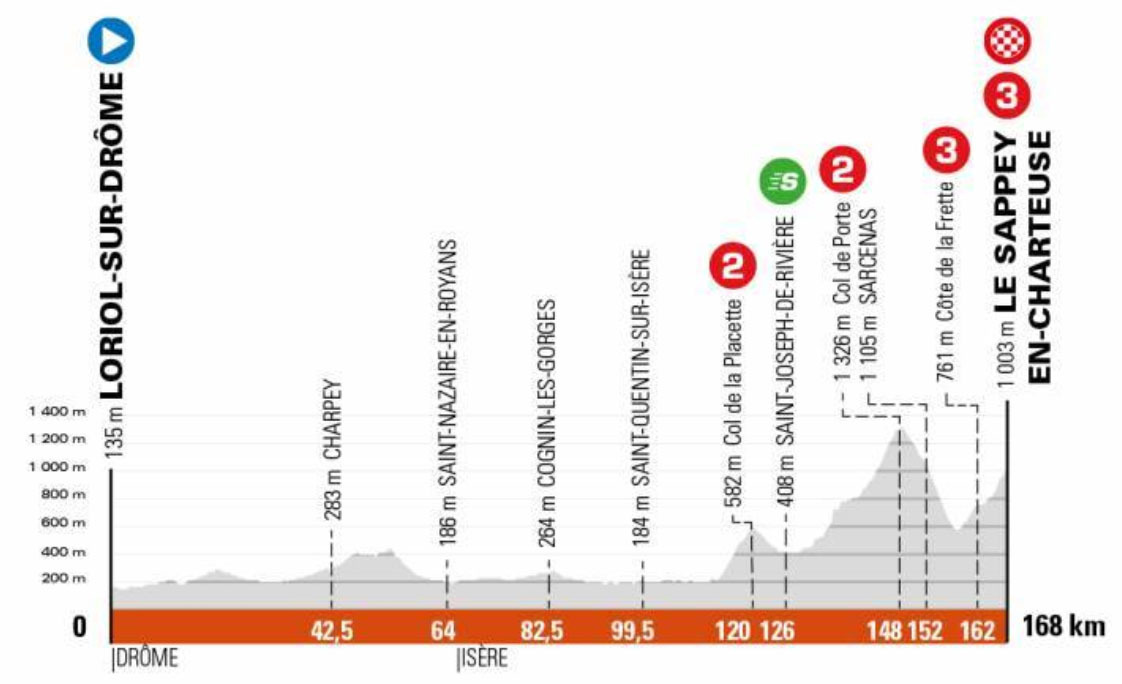 Stage 6 sees the race head into the Alps and borrows some of last year’s Tour de France route as it takes the gorge road out of St. Joseph to climb up into the Chartreuse Alps and cross the Col de Porte. After, there’s the right turn to descend the Col de Palaquit via Sarcenas and the race rejoins the main road of the Col de Porte to climb up to the finish in Le Sappey. It’s a mountainous final 50km but rarely steep, the climbing is often 5-6%. 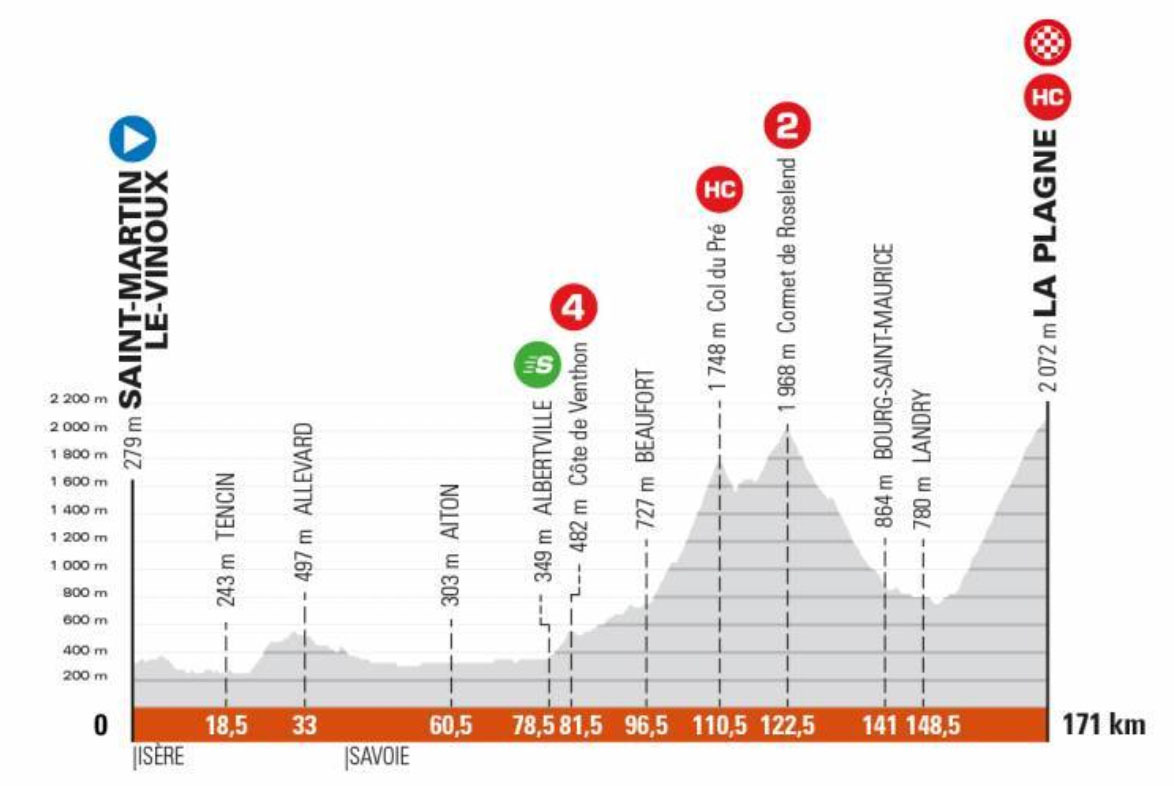 Stage 7 and a big day in the Alps. First the stealth climb to Allevard, then it’s round to Beaufort and the postcard-scenic climb of the Col du Pré and across to the Cormet de Roselend. There’s the fast descent and a short valley section before the climb to La Plagne, one of the big resorts belonging to the Compagnie des Alpes. It’s a classic ski station access road, wide and with a regular grade but the difficulty is the slope, it’s a touch steeper than usual, with 17.5km at 7.5% and it reaches an altitude of over 2,000m. 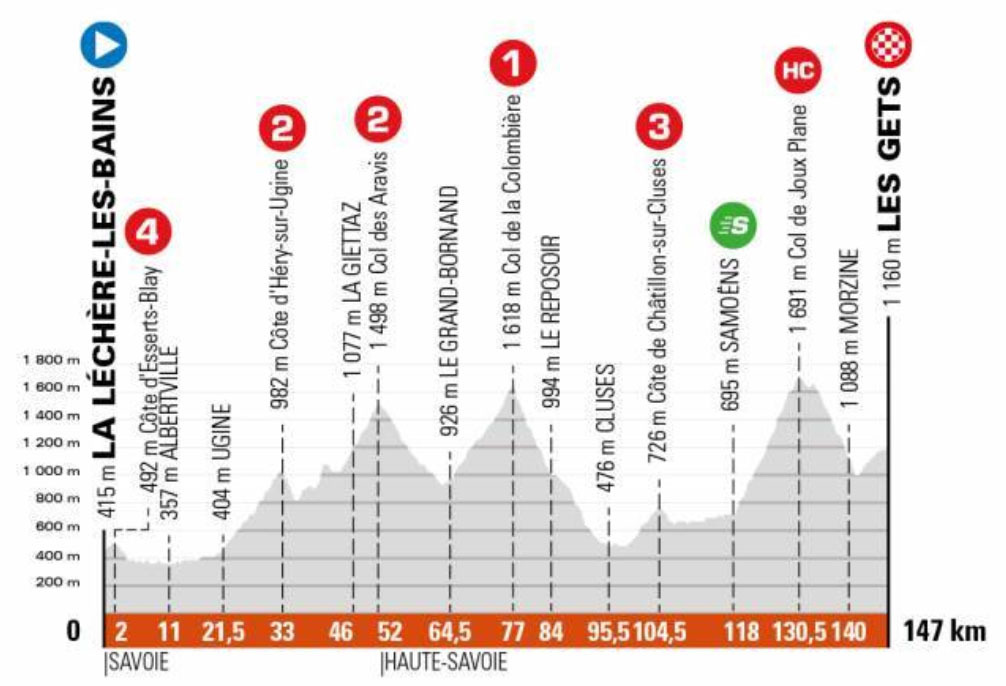 Stage 8 is the typical Dauphiné flourish of recent years, just 147km and packed with 4,500m of vertical gain. After a quick drop down the valley at the star there’s the backroad climb to Héry and then across to the Aravis and its descent straight onto the Col de la Colombière. There’s a 20km lull in the middle of the stage via the Col de Chatillon where a big team can try to get things back under control but then comes the fearsome Col de Joux Plane, 11.5km at a selective 8.5% but never an even gradient, before a toboggan descent into Morzine and then a big ring climb up to Les Gets for the finish.

The Verdict
Eight stages and little for the pure sprinters, there’s often one or two stages to tempt them but if any show up here it’s because either they haven’t studied the route or they need a week to work on their mountain pedal stroke ahead of the Tour de France.

The race often has a dress rehearsal stage for the Tour de France where it either offers a suitable length time trial or races on the same roads as a key mountain stage. But this year’s edition doesn’t have either except the shared Col du Pré-Roselend section and the Critérium is all the better for it, a shorter time trial won’t dominate the race. If anything this week is more mountainous that the Tour de France with a tough final weekend, first the La Plagne finish and then the Joux Plane on the Sunday, these two stages are spicier than anything the Tour will serve up a month later.