The Giro rides into Milan, a triumph for the race, riders, the sport and Italy. The race concludes with a short time trial and one enormous verdict as Tao Geoghegan Hart tied is on time with Jai Hindley, it’s up to them to win the race. 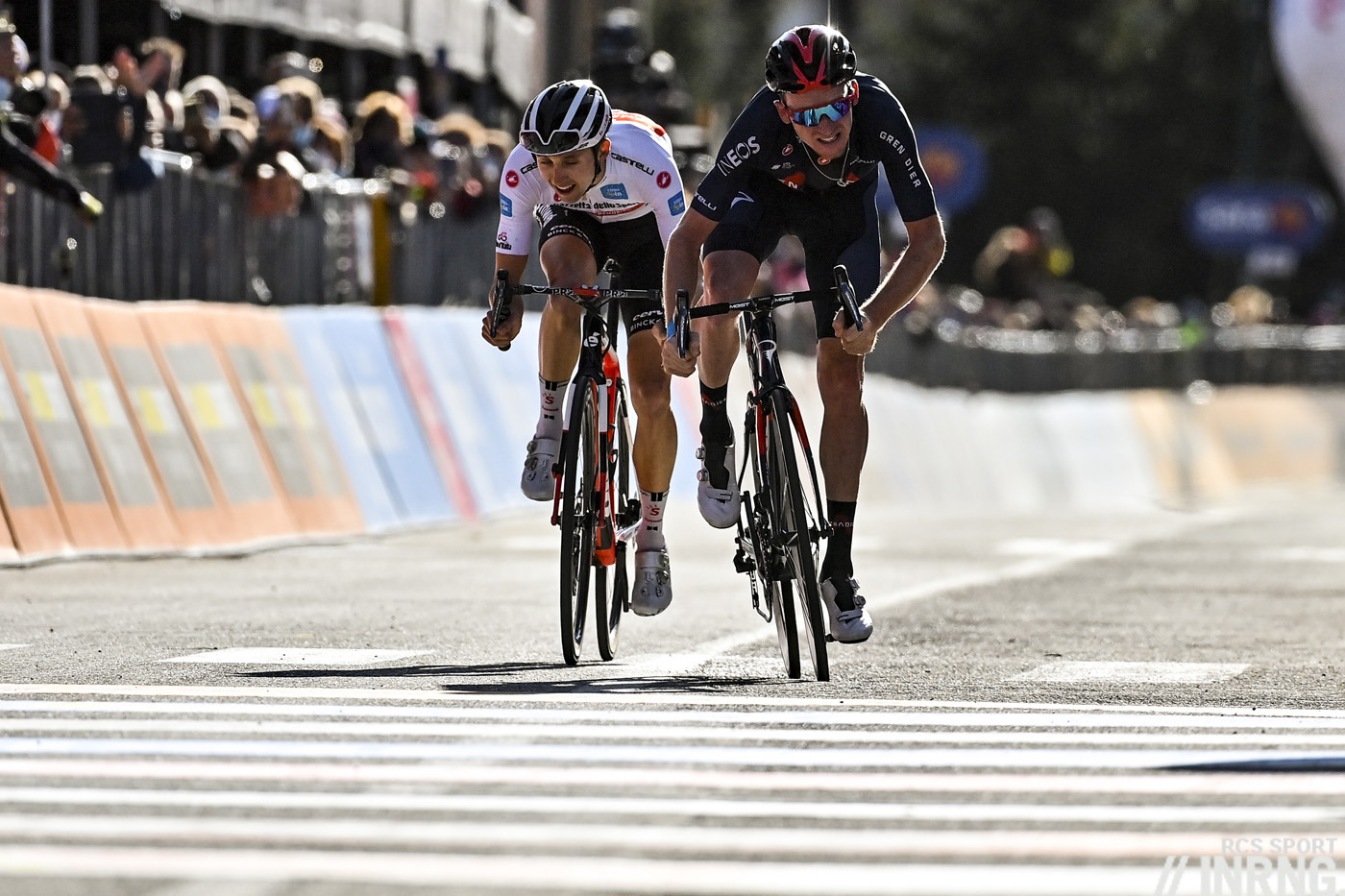 Side by side in Sestriere: a big breakaway went clear but they didn’t have enough time on reaching Sestriere and got overtaken in the finish. Ineos set the pace and Rohan Dennis was like a rickshaw driver, towing Tao Geoghegan Hart, just like on the Stelvio. Again Wilco Kelderman was dropped, as soon as a metre opened up the Dutchman was done for, his strength is his smooth style but it’s also his weakness, he seemed unable to stomp on the pedals to close the gap and his pink dreams were over. It left a trio in front with Dennis as chaperone to Geoghegan Hart and Jai Hindley on the last time up to Sestriere. Hindley tried several attacks but couldn’t get the gap, Geoghegan Hart looked to be on the very limit but managed to tuck into the slipstream and in the finishing straight he launched a long sprint to win the stage and with it the time bonus.

The Route: as flat as the profile looks, if not flatter to the point where the ramp out of the start hut is a notable slope today. It’s out of Cernusco sul Naviglio today, naviglio as in canal and a clue to how flat things are. It’s past Vimodrone and into Milan and all on big roads, this is a practical course to take the race from the suburbs into the city, it’s no scenic tour, borrowing the seedy backstreets of Milano Centrale station before the city’s historic centre. There are hardly any bridges to ride over nor underpasses to dip into, nor sharp corners, this is a test of power and aerodynamics rather than skill.

The Contenders: it’s hard to see past Filippo Ganna (Ineos) for the win, he’s won the two time trials already and by some margin, the flat course suits him and the only question is fatigue but he’s not been toiling for hours on end, day after day for the team. There are other names listed in the picks below but they’re back-ups in case Ganna’s ill or punctures today.

Hindley vs Geoghegan Hart: who will win in the Giro? We can extrapolate time from the two time trials in the race. In Palermo on Stage 1 Hindley was 49s quicker, or 3.2 seconds per kilometre faster; in Conegliano TGH was 1m15 quicker, that’s 2.2 seconds per kilometre better. Then we can apply some sense to these rides, on the opening day TGH wasn’t aiming for a high place on GC and probably didn’t give it everything on the windy day. But for the second time trial both riders were riding high on GC and needed a good performance, so Conegliano makes for a better comparison and here it’s firmly advantage TGH. However we’re a week later into the race, other considerations like freshness come into play, who had a good night’s sleep and the sometimes undefinable feel of the legs on the day. As Greg LeMond said on the eve of winning the Tour de France “if he has a bad day and I have a good day” then anything’s possible but on paper it’s Tao-time, even if he can scrape out one second per kilometre then he’s got it made. But it’s so close that should a rider puncture it could be decisive.

Elsewhere there are such big gaps that the rest of the top-10 looks to be set in concrete already but João Almeida could well overtake Pello Bilbao today to claim fourth place.

The Rules: Hindley is in the maglia rosa because while he’s tied for time, in the two time trial stages they’ve timed the riders down the nearest one hundredth of a second and Hindley is ahead here by fractions of a second. If they were to both finish on the same time today it’d come down to the timings again: who has covered the whole Giro course faster, including the fractions from the three time trial stages. If they were still tied on time – and we’re well into theory now – then we see who was actually quicker each day by adding up the placings on each stage. Hindley was 46th on Stage 1, 30th on Stage 2, 24th on Stage 3 and so on making 46+30+24… his total for 20 stages this morning is 380 compared to TGH’s score of 592 so it’s advantage Hindley just in case of a total tie on time.

TV: an extra hour of suspense as the clocks have changed in Europe overnight, from CEST to CET and finish is forecast for 4.30pm CET. The switch over to La Vuelta for the revised summit finish at Formigal in the Pyrenees.