A quick breather in between the mountain stages? No, today’s stage is 258km and under rain, it’ll be hard for all. There’s a probable sprint but not a certain one. 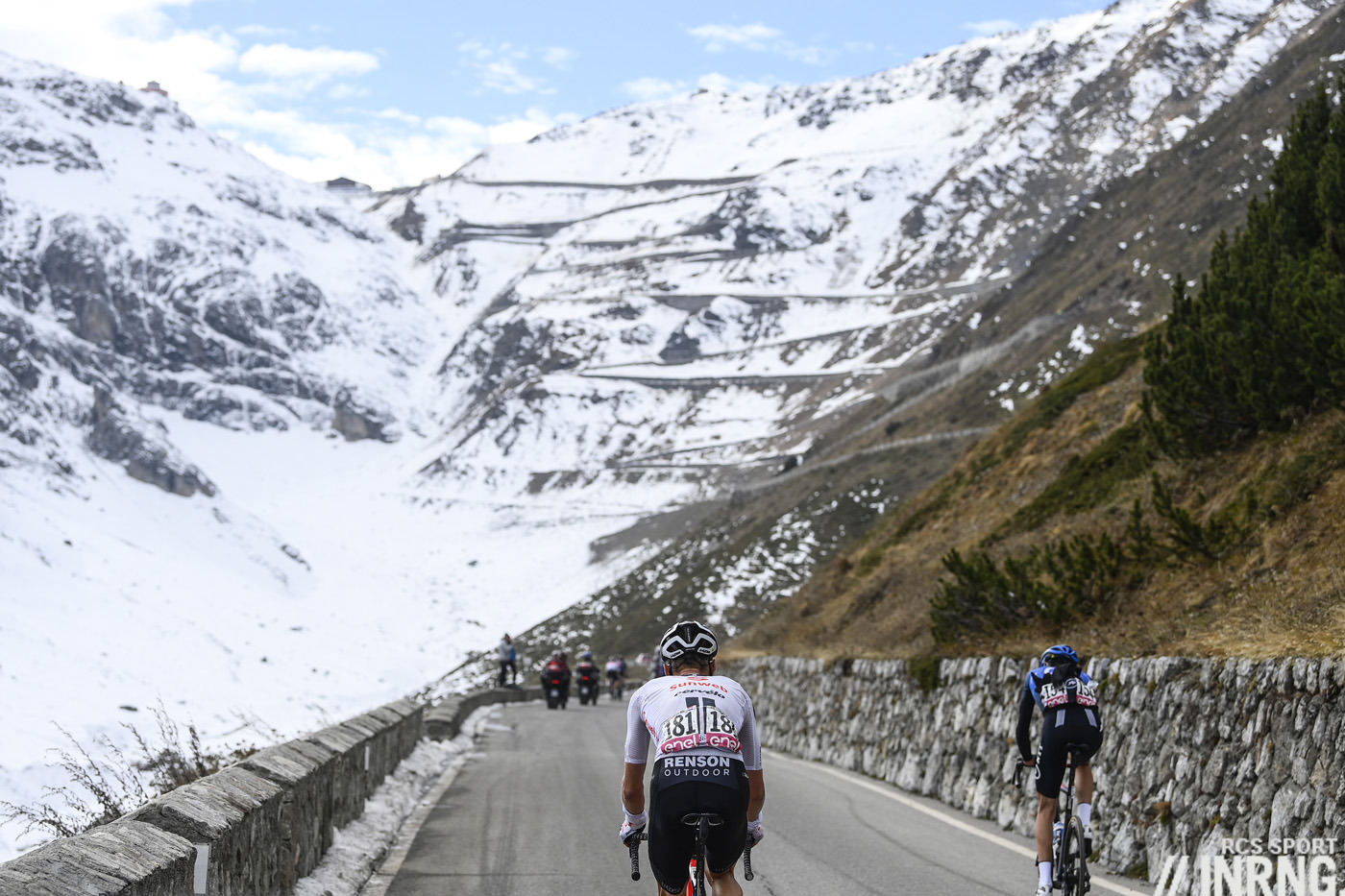 Wilco, but not KO: a tappone, the GC contest came alive, perhaps as expected and certainly as hoped for and the Stelvio didn’t disappoint. Sunweb led for much of the stage but on the Stelvio Ineos came to the fore with Rohan Dennis proving a precious help for Tao Geoghegan Hart as his pace blew riders off the back. Pozzovivo was the first to crack. João Almeida had a wobble, then he went for good. Soon after Nibali and Fuglsang were dropped too as they climbed higher, seemingly going from autumn to the winter snowscape in minutes. It left Dennis towing Geoghegan Hart, Jai Hindley and Wilco Kelderman, only Kelderman started to yo-yo and then he too was gone. But he didn’t panic, he paced himself and only lost 40 seconds by the top of the climb and maintained this gap on the descent. It was after the descent of the Stelvio, on the flatter section of road across to the final climb, that Dennis was invaluable, towing his new team leader while behind Kelderman was all by himself and losing time. Kelderman continued to pace himself while Hindley sat tight, loyally not taking a turn and then outsprinting Geoghegan Hart for the stage win while Kelderman came in 2m18s down to collect the maglia rosa. Almedia held on to finish seventh on the day and slipped to fifth overall.

Should Hindley have sat up to help shepherd Kelderman? Even Kelderman was wondering. We’ll know for sure on Sunday but as of today the point is not to use hindsight but to review the tactics in the moment. Go back to yesterday afternoon, having the Australian up front was to have an option on the outcome of the race for Sunweb, imagine the risk of calling him back only for Kelderman to have missed an energy gel and fade? Sunweb would have lost twice over. It sets up a fascinating contest for the weekend, Kelderman, Hindley and TGH are within 15 seconds overall. It could be advantage Kelderman now because Saturday’s stage has been altered and made easier but if Ineos and TGH can drop him once they’ll want to try and do it again, and if Hindley can follow then it brings suspense to Sunday’s time trial like we got on the Planche des Belles Filles in September.

The Route: 253km? That’s what the profile says but a damaged bridge means a small detour and it’s 258km. It’s south-west out of the Alps and around Milan to Asti, a home of sparkling wine. This is a long day any time but in the third week of the Giro, in late October and raining so it’ll feel that bit longer. There are few secrets to the course but after the sprint in Masio the road heads into the hills briefly, climbing through the vineyards and hazelnut groves but it’s a gentle slope, the difficulty comes in the hairpins and bends. Then it’s a big wide road into Asti.

The Finish: flat and a left hand bend and then a right hand bend before the 500m finishing straight.

The Contenders: an obvious route for the sprinters but there are 13 teams without a stage win and and it’s their last chance to win a stage as both Saturday’s mountain stage and Sunday’s TT surely belong to the stars and specialists. There not many sprinters left either, meaning few teams willing to chase the breakaway which further makes it worthwhile going up the road, more so as even the teams with sprinters will be wary of doing the work if they’re going to get smoked by Arnaud Démare (Groupama-FDJ). Cofidis might prefer to fire a rider up the road so they don’t have to chase for Elia Viviani. Even Groupama don’t have to win in a sprint today because if a move stays away and doesn’t contain Peter Sagan (Bora-Hansgrohe) then Démare’s points jersey conquest takes a leap forward when in a straight sprint there’s still the arithmetical possibility of Sagan closing the 37 point gap, but we’re talking if Sagan wins and Démare crashes out. So in short Démare is the obvious pick but isn’t a three chainring certainty as the breakaway has a decent chance.

Weather: cloudy with rain throughout the day, a top temperature of 16°C.

TV: yes, the finish is forecast for 4.30pm CEST. You can switch over for La Vuelta and a near certain sprint finish one hour later but watch out for the wind which could both speed up and spice up the stage.