A tough day in the hills and on wet roads too. 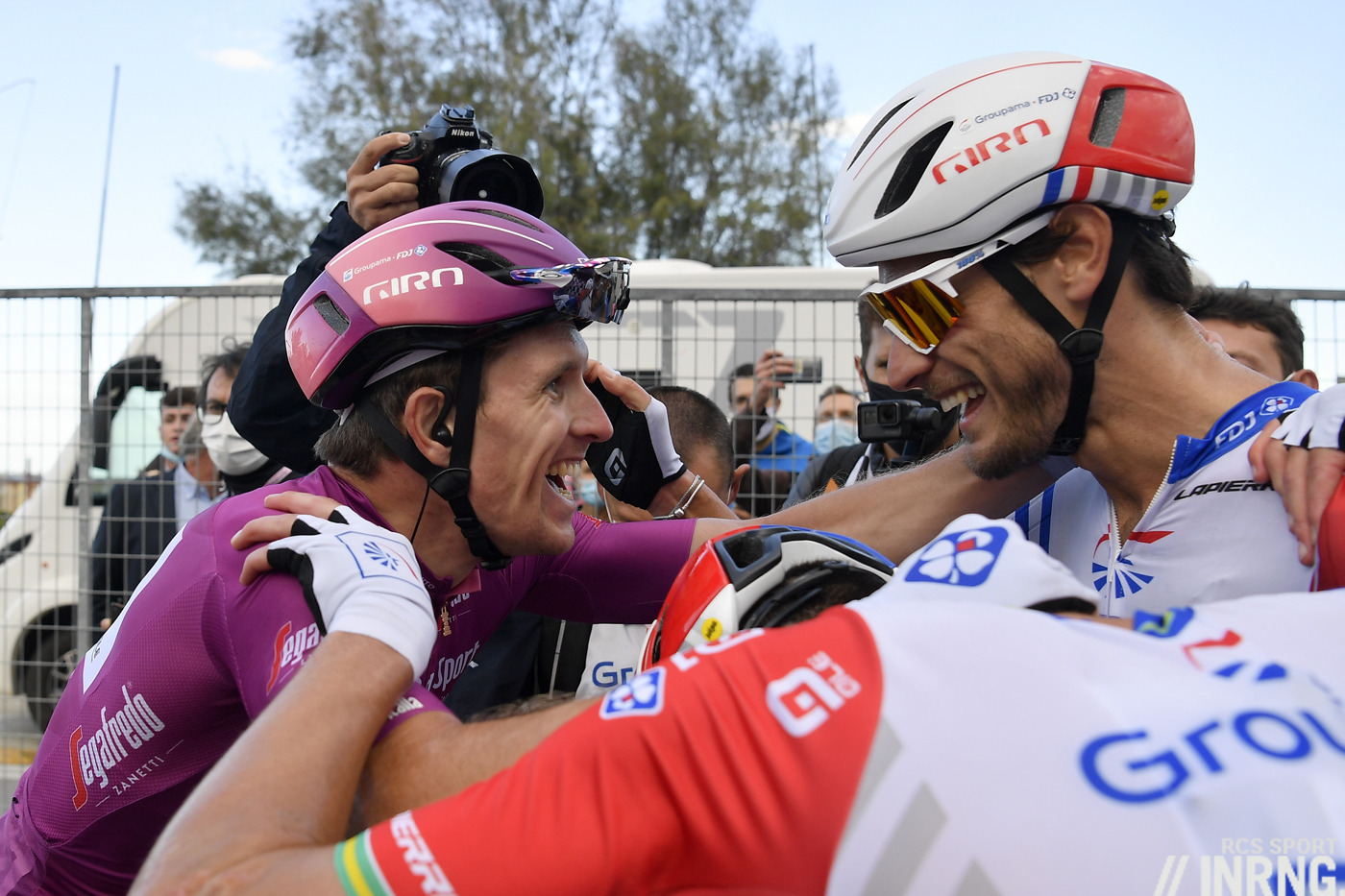 “Let me have men about me that are fat; Sleek-headed men and such as sleep o’nights” says Shakespeare’s Caesar. 2,000 years ago sprint trains weren’t a thing but being backed by the biggest guys works for emperors in the senate, just as it does for sprinters in the peloton, although don’t call Jacopo Guarnieri et al fat. Arnaud Démare’s train had the bulk and the means to depose any challengers, they toiled until Arnaud Démare launched with 150m to go and took his fourth stage win, there were no acrobatics, no fitting through a tiny gap, just a dragster race.

Démare has 14 wins this season, a decent tally in a season with or without a pandemic and when he finished the stage the joy was obvious, seemingly as if he’d won his first ever race and also the Olympics at the same time, despite this being his fourth stage so far, as in almost a third of the Giro’s stages. But will Démare and team sleep all night? They might be up checking the points as Peter Sagan finished second to secure points in the ciclamino competition and could score more. With only one obvious sprint stage left Démare is the best sprinter but far from certain when it comes to winning the points competition.

The Route: 204km into the Marche hills and back, today uses the same course as the Nove Colli (“Nine Hills”) gran fondo and the training roads of Marco Pantani (there’s a memorial – one of many in Italy – to him along the way). With almost 4,000m of vertical gain, this is a mid-mountain stage with several climbs which are not hard if ridden alone, instead the difficulty comes in the repetition, there’s little time for recovery and even the ascents are uneven with changing gradients. The descents are as awkward as well as they twist through the landscape. The final climb is listed as a fourth category ascent but as ever this is a label, the reality is over four kilometres at mostly over 8% and if there’s a brief descent not far from the top this just leads to a final wall over the top.

The Finish: the final 20km see the race head back to the coast and there’s a straightforward ride through Cesenatico and almost a two kilometre long finishing straight along the sea front.

The Contenders: a lottery stage, one to sit back and enjoy but this blog still has to pick some names? A breakaway or a sprint among the GC contenders? For the breakaway look to Thomas De Gendt (Lotto-Soudal), Jhonathan Narvaez (Ineos) and Diego Ulissi (UAE Emirates) as the first can just ride away and the next two have the finishing skills. Talking of which Peter Sagan (Bora-Hansgrohe) is a defensive pick, he could go in the break or hang with the GC riders and get back for the finish.

Among the GC contenders it’s a test to see if João Almeida (Deceuinck-Quickstep) can get over this course with the big names but he’s got a good chance and he’s got a good sprint for the finish. Patrick Konrad (Bora-Hansgrohe) and Brandon McNulty (UAE Emirates) also have a decent finish too.

Weather: wet and a top temperature of 18°C

TV: the finish is forecast for 4.30pm CEST but tune in early for the hills and thrills.