A sprint stage along the coast. 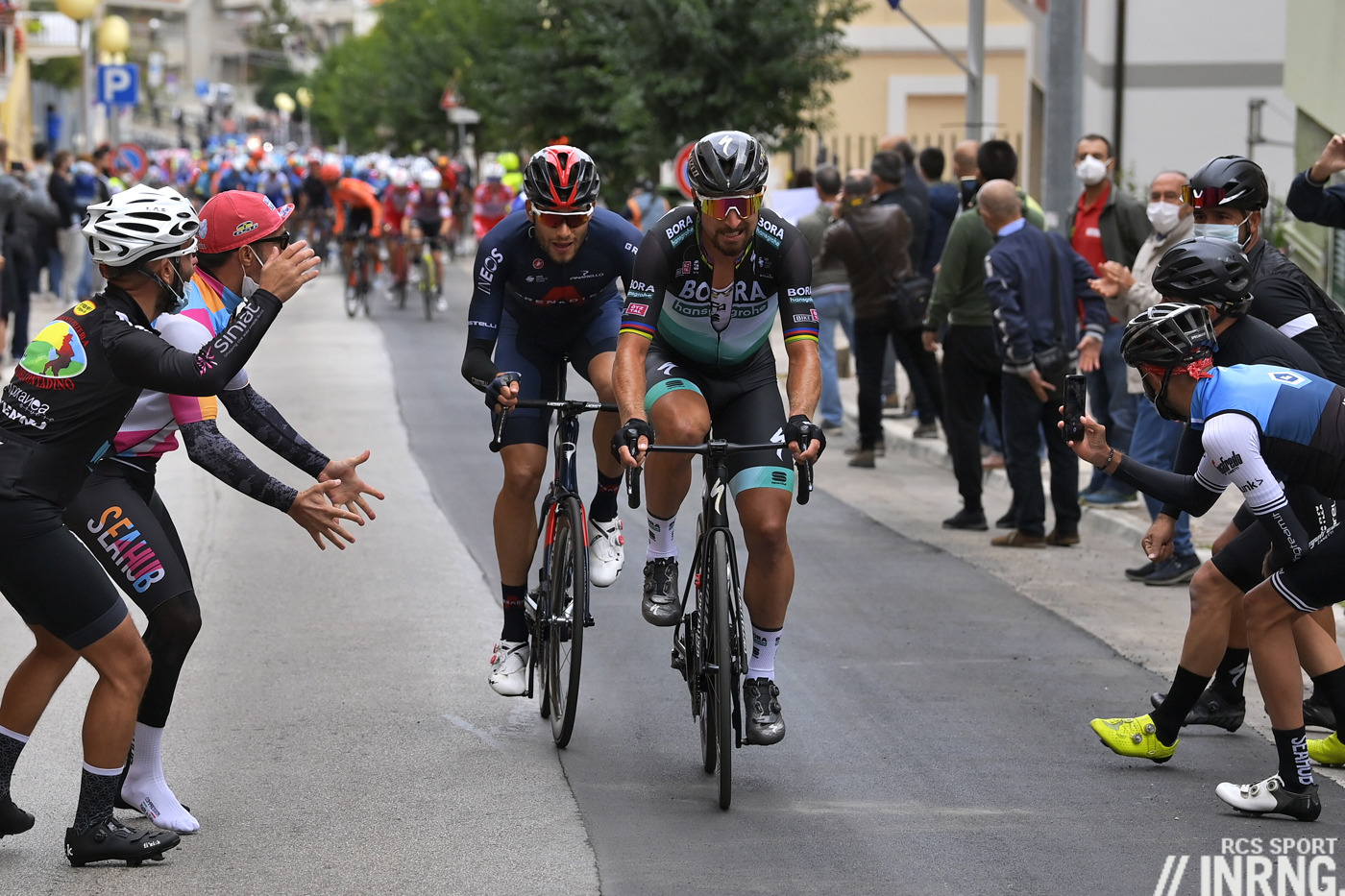 Sagan delivers: once upon a time Peter Sagan would swap messages with friends over breakfast to discuss what victory salute to pull off later that day in the Tour de France. Things are more complicated these days but finally he got a win. It’s not the stuff of Lazarus, more the law of averages after three second places in the Giro already, but the relief was palpable. He’d attacked with Filippo Ganna, the pair were joined by others and soon after Groupama-FDJ tried to close things down but were outnumbered and outpowered. In the finale Sagan rode the remnants of the break off his wheel one by one and took a fine solo win. Behind the racing was lively but inconclusive, Domenico Pozzovivo overcame a crash and a mechanical to get back in contract while Jacob Fuglsang punctured and lost a bit of time. 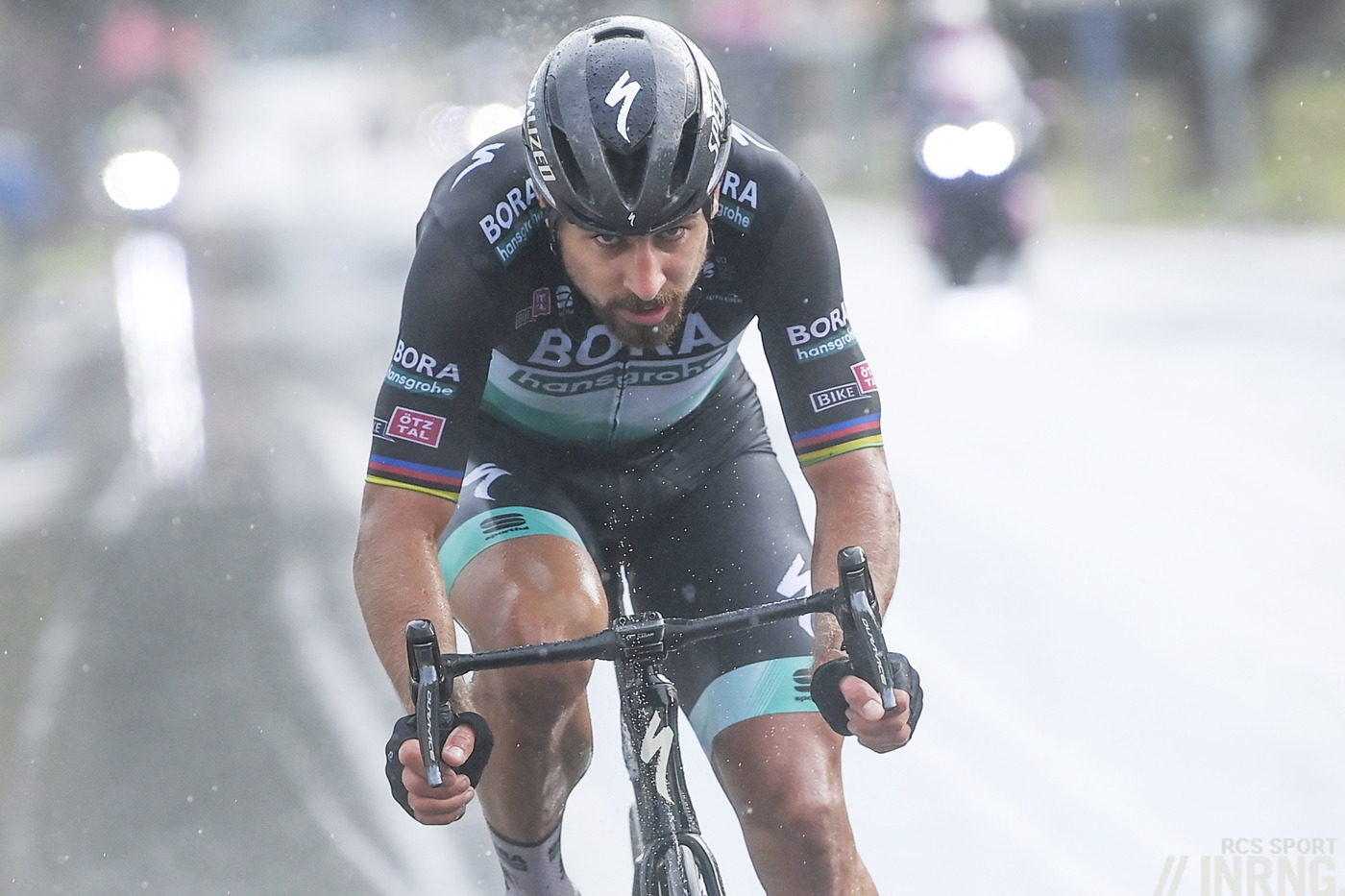 What a difference five hours made, the cheer of Sagan’s win displaced, for now at least, the day’s gloom. Thing started overnight with the Italian government introducing tighter anti-Covid-19 measures, the Giro compounding the clouding skies with the results of the rest day Covid-19 tests: Steven Kruijswijk and Michael Matthews out of the race following rest day positive Covid tests. Mitchelton-Scott and then Jumbo-Visma decided to quit the race in the wake. It’s all a big concern for the race given the risks of contagion, the “bubble” isn’t so useful if the virus is propagating inside it or if it is porous, going by accounts it seems some hotel conditions are flouting the UCI guidelines which mandate “a reserved and independent dining room” for each team.

The Route: 182km north up the coast and the road from Pesaro to Monte San Bartolo is the hardest part, it’s the twisting coastal road used by the Giro before, you might remember it from 2013 when it was part of the time trial course when Alex Dowsett won the stage and Bradley Wiggins didn’t.

The Finish: flat and a parade through the sea-side resort of Rimini including several corners and two tight bends within the final kilometre before a 600m finishing straight.

The Contenders: Arnaud Démare is the obvious pick for all the obvious reasons: he’s the fastest and he’s got the strongest team in Groupama-FDJ, a whole team dedicated in his service although now sans Ramon Sinkeldam, the Dutchman has taken Démare and his lead out Guarnieri under the triangolo rosso and into the kilometre but left the race yesterday. Only sprints always have a random element so others still have a chance and they know they need to seize it as it’s today or Stage 19 to Asti otherwise it’s game over for Fernando Gaviria (UAE Emirates), Elia Viviani (Cofidis), Alvaro Hodeg (Deceuninck-Quickstep), Davide Cimolai (Israel) and more. Peter Sagan (Bora-Hansgrohe) doesn’t have to try anything spectacular now, he can queue on Démare’s wheel.

Weather: cool and cloudy, 18°C a light tailwind up the coast.