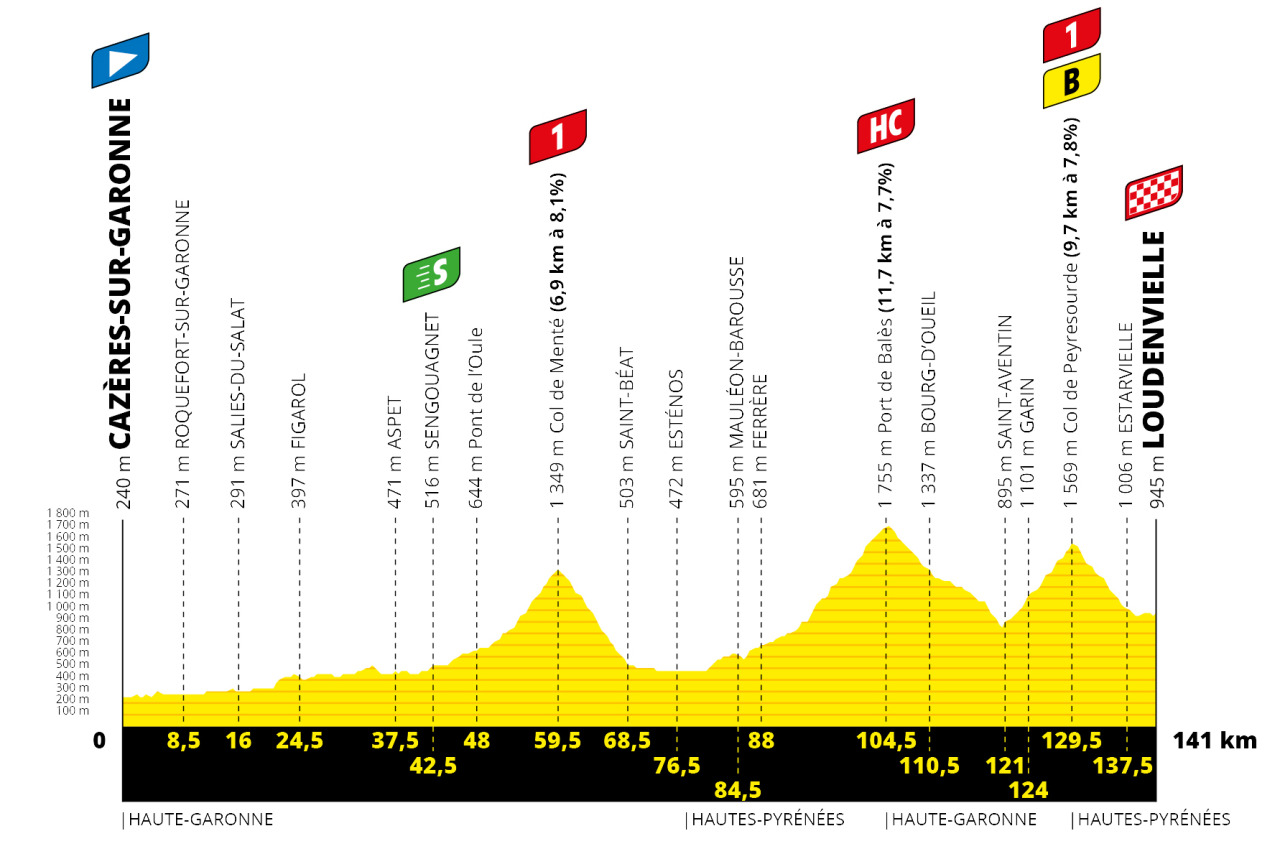 The Pyrenees and short and intense stage with three climbs and a fast descent to the finish. 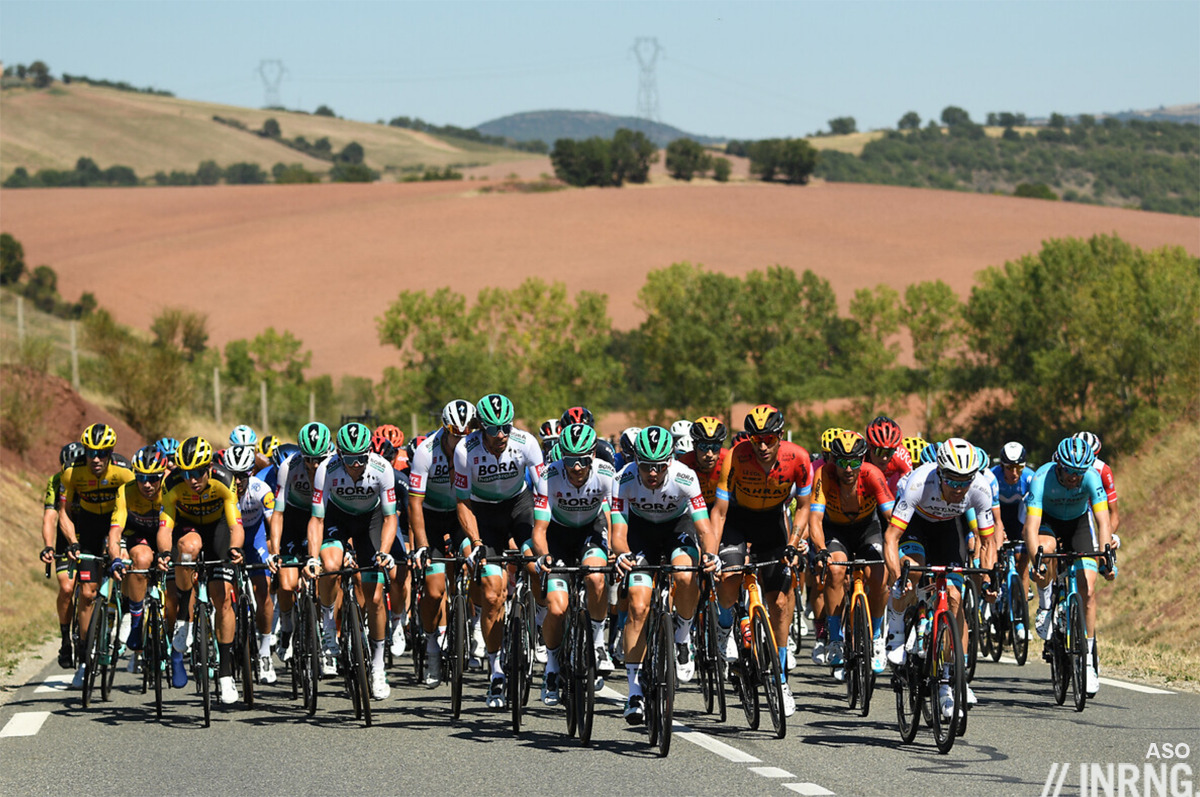 Hard Lavaur: the Vent d’autan? The tramontane? No, the Bora got up instead. The German team exploited the uphill start to leave rival sprinters tasting their breakfast a second time. At first it looked like they’d drive the pace to the intermediate sprint where Sagan took enough points to take a lead in the points competition but they kept going, and the dropped sprinters and their team mates threw in the towel. Further on past Castres there was just enough wind, plus the riders were tired enough from the long first phase of the stage, to split the front group apart. Mikel Landa, Ritchie Porte, Bauke Mollema and Tadej Pogačar were caught out and Richard Carapaz punctured, they all lost 81 seconds to the lead group of 42 riders, down but not out. Wout van Aert won a hectic sprint, probably as much a test of stamina as speed but such is his luck that he can win on the days he’s not supposed to, an ace of all trades. Bora did the hard work but Sagan couldn’t finish it off in Lavaur, a roundabout near the finish line had been removed but the temporary works were not exactly billiard table smooth and several riders dropped their chains. Sagan then appeared to wobble as he tried to get through a gap past Hugo Hofstter and only finished 13th to collect four more points and lead Sam Bennett by just nine points. The waning of powers or what he’s called “unluck” in the past? Either way, we have a contest for the green jersey.

The Route: just 141km and after a quick dash across the Comminges area via the intermediate sprint in Sengouagnet and then a scenic approach up the valley to the Col de Menté, listed as 6.9km at 8.1% but that skips the first part of the climb, there’s an extra kilometre at 10% to scale before a quick descent, then it’s all solid climbing at 8% but on a wide, regular road. The descent is fast and technical in places, famous for the Ocaña hairpin but with plenty of other moments.

There’s 20km across the plains to the Port de Balès, an upstart youngster of Pyrenean climbs, the top was only tarmacked in 2006, and in large part so that the Tour de France could cross, a long-held wish of the region’s sénateur. It’s the odd one out today, an irregular climb with constant changes in gradient, one minute 4%, the next 12% and so on.

The Peyresoude’s a big boulevard, it’s wide road and the steepest part is at the start, otherwise there are no surprises, lots of 7% to the top. There are 8-5-2 bonus seconds at the top. The descent is fast but this is the more technical side, it can reward skilled descenders.

The Finish: a slight drag to the flamme rouge and then it drops down, it’s flat in the final kilometre, there’s a small chicane with 300m to go and small as in not very pronounced rather than tight.

The Contenders: spin the wheel of fortune to work out who gets in the breakaway today. Often late in the race we see the same names again and again in the moves but we’re only a week in. So yes to Alexey Lutsenko (Astana) and Jesus Herrada (Cofidis) again but without much conviction right now. Who else to pick? They need to climb well but having a handy sprint helps for the finish. Max Schachmann (Bora-Hansgrohe) is still recovering from a broken collarbone and could be tired from yesterday but he’s the archetypal rider for today. Davide Formolo (UAE Emirates), L-L Sanchez (Astana) and Marc Hirschi (Sunweb) come to mind but the latter’s a doubt for the high mountains. Alessandro de Marchi (CCC), Dani Martinez (EF) and maybe Ben Hermans (Israel too). There’s also the mountains jersey up for grabs today, Benoît Cosnesfroy leads on 25 points but win one of the first category climbs plus the Port de Balès and a rider will collect 30 points. Among the riders who lost time yesterday, Bauke Mollema‘s (Trek-Segafredo) must be good for a late attack.

A big GC day? Hopefully but maybe not, the Port de Balès is a hard climb but the Peyresourde is a big boulevard that suits strong teams. Still Julian Alaphilippe (Deceuninck-Quickstep) can try, he’s got the jump to take a small gap over the Peyresourde and the skills to turn this into more during the descent and Jumbo-Visma don’t need to close him down. Otherwise Primož Roglic (Jumbo-Visma) is the obvious choice. Tomorrow’s stage has the very steep Marie Blanque, if people don’t move today they will tomorrow but you wonder if Jumbo-Visma need to strike while their irons are hot right now and profit from both of this weekend’s stages.

Weather: a sunny day, 25°C and a slight crosswind for the first part across the plains, this should make a lively start a bit edgier still.

TV: live coverage from the start at 1.30pm CEST to the finish forecast around 5.15pm Euro time.