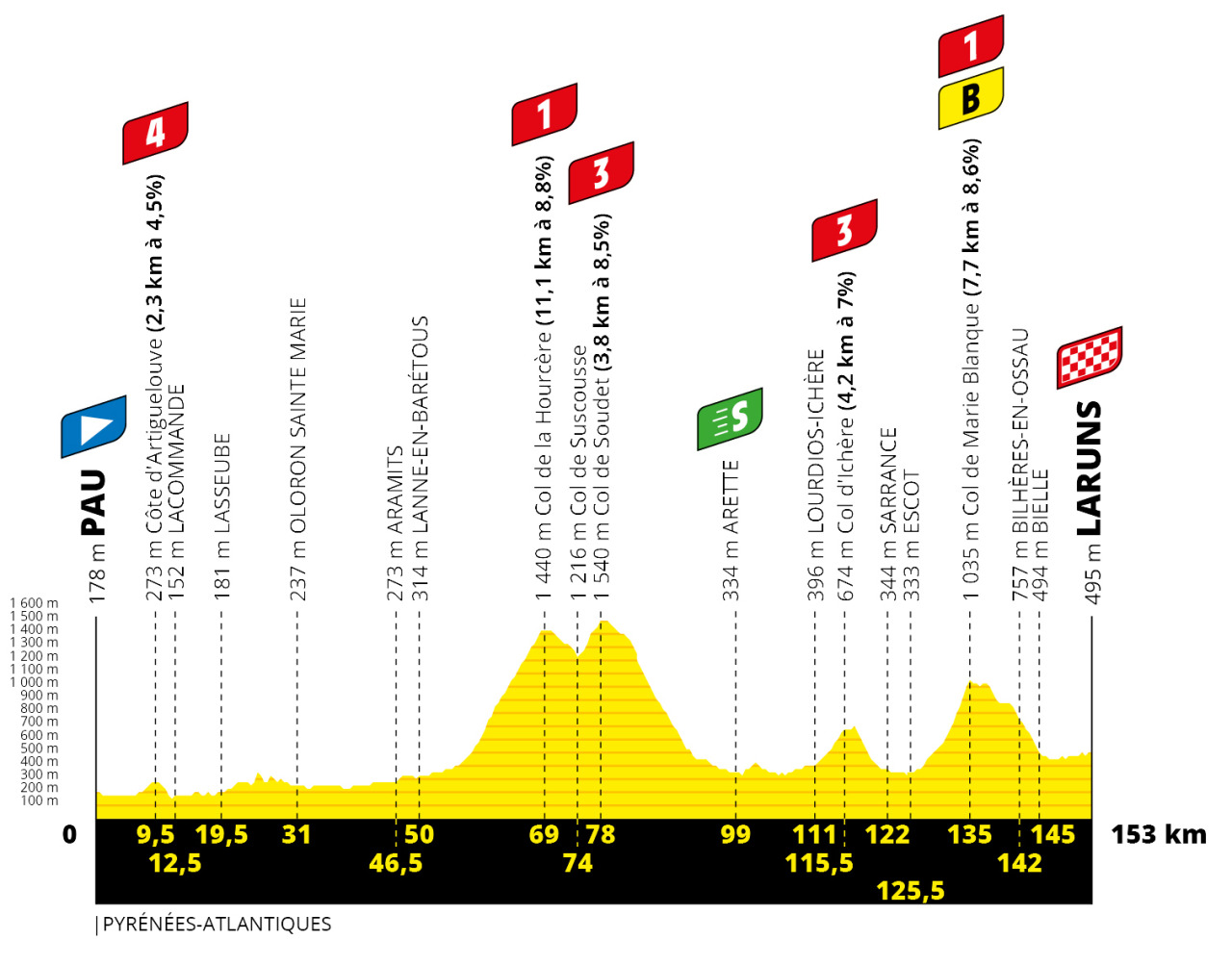 The second day in the Pyrenees, today’s stage saves the best for last with the steep ascent of the Marie Blanque. The GC contenders have started to trade blows, today’s final climb is ideal for someone to go clear and stay away. If you plan to watch, note the finish is an hour earlier than usual so far. 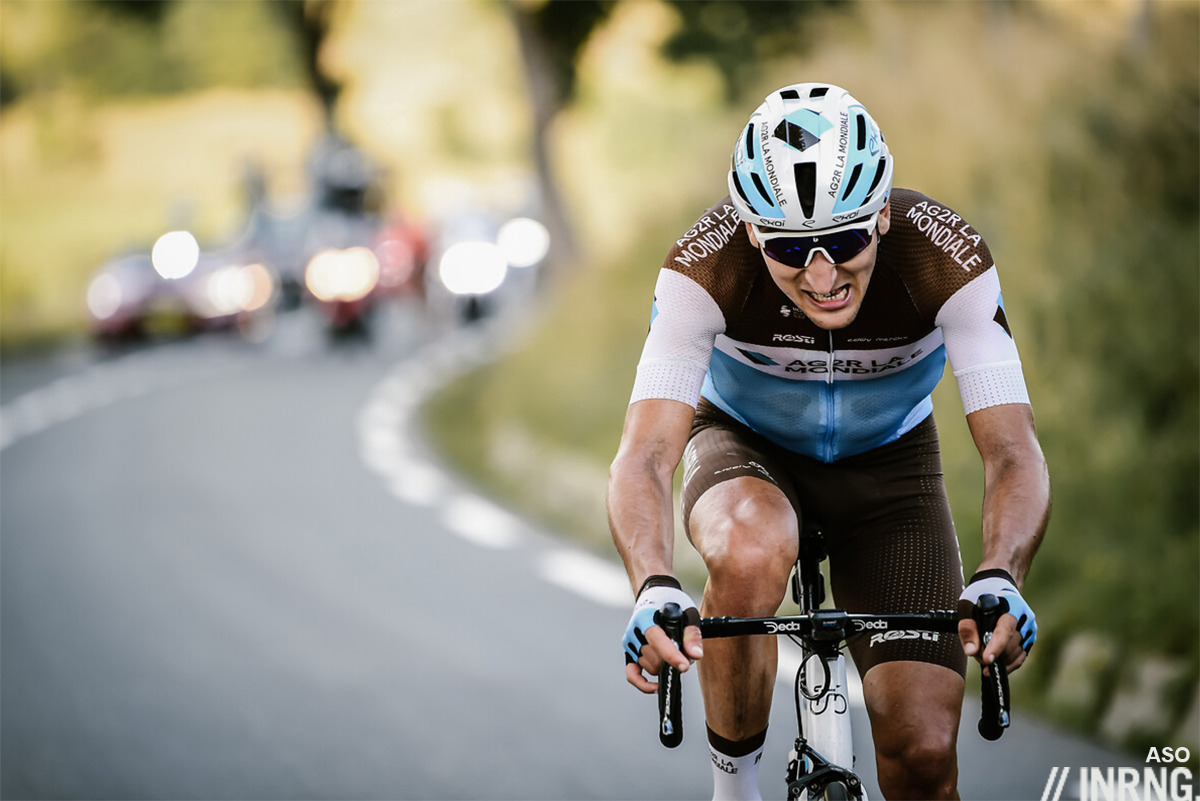 Shepherd’s Delight: a break of 13 formed at the start and quickly took a big lead. The picky spectator could have asked for more action, with wave after wave of attacks but most teams had a rider up the road so that was that. Ilnur Zakarin was the best placed on GC 18 minutes down and Mitchelton-Scott were in no rush to chase. “Zaka” was the best climber on paper but couldn’t get clear on the Port de Balès, Nans Peters kept looking like he was going to blow to smithereens but held on, and even beat him over the top. It looked like he wanted the mountains points but the Ag2r rider pressed on while Zakarin struggled on the descent, tracing a series of straight lines down the curved road. Peters resembled a lumberjack hacking away at the pedals on the final climb of the Peyresourde but it worked, Zakarin couldn’t close the gap. Nans Peters, named after a TV series (like Sonny Colbrelli), brought joy for Ag2r La Mondiale who are having a great Tour. Meanwhile Groupama-FDJ’s mood must be down in the dumps, one day Pinot was taking turns in the first echelon, the next ejected on the Port de Balès but that’s back pain, having a constant load on a steep climb changes everything. We’ll see if he stays in the race and goes stage-hunting as he did in 2015 to win the Alpe d’Huez stage or retires to recover.

The other GC collapse was Tom Dumoulin. Jumbo used up all their riders, they’re not at full strength and Sep Kuss was ejected before Wout van Aert, then George Bennett didn’t last long on the Peyresourde. So Tom Dumoulin was left to do the work. As in the Tour de l’Ain and the Critérium du Dauphiné the Dutch squad looks very strong… until the final climb. Julian Alaphilippe was the catalyst, he attacked then folded moments later, his way of bowing out with a skip in his step. It drew out other riders and soon left Roglič a view up close of his rivals, who could close the gaps and who couldn’t. Only he let Tadej Pogačar back in the race, when his compatriot launched moves he could follow the first time but not the third and the young Slovenian took back 40 seconds, half of what he’d lost the day before. There’s no team able to control the race, once the favourites are alone in each other’s company it’s a bar brawl. Roglič looks strong but he’s not capitalising on it, but you can argue there’s two weeks to go and why hurry. Meanwhile Nairo Quintana and Guillaume Martin look lively but ditto, no gains while Rigoberto Uràn and Egan Bernal can hang in there and are buying themselves options on the future too. 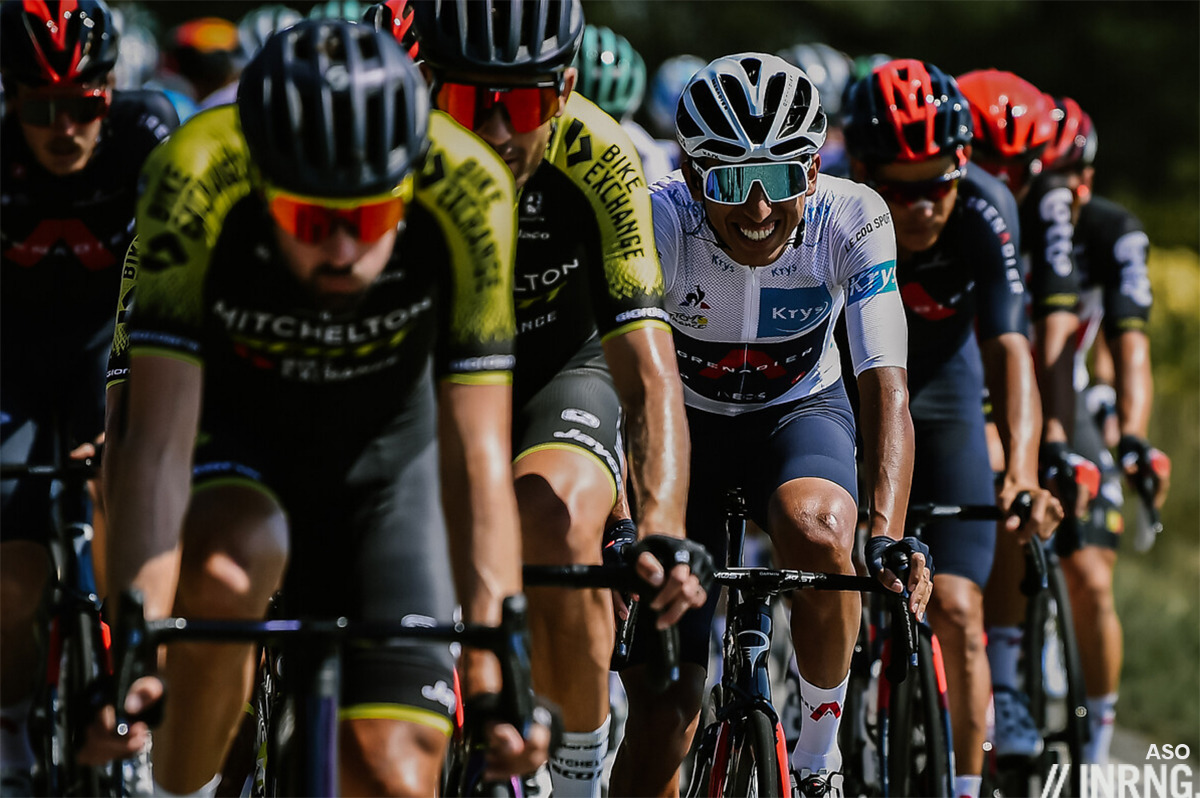 The Route: after the near obligatory visit to Pau – why Pau for the 72nd time? Because it’s the large city within sight of the Pyrenees, meaning access, hotels and more – there’s a dash across the plains and foothills for over 60km. 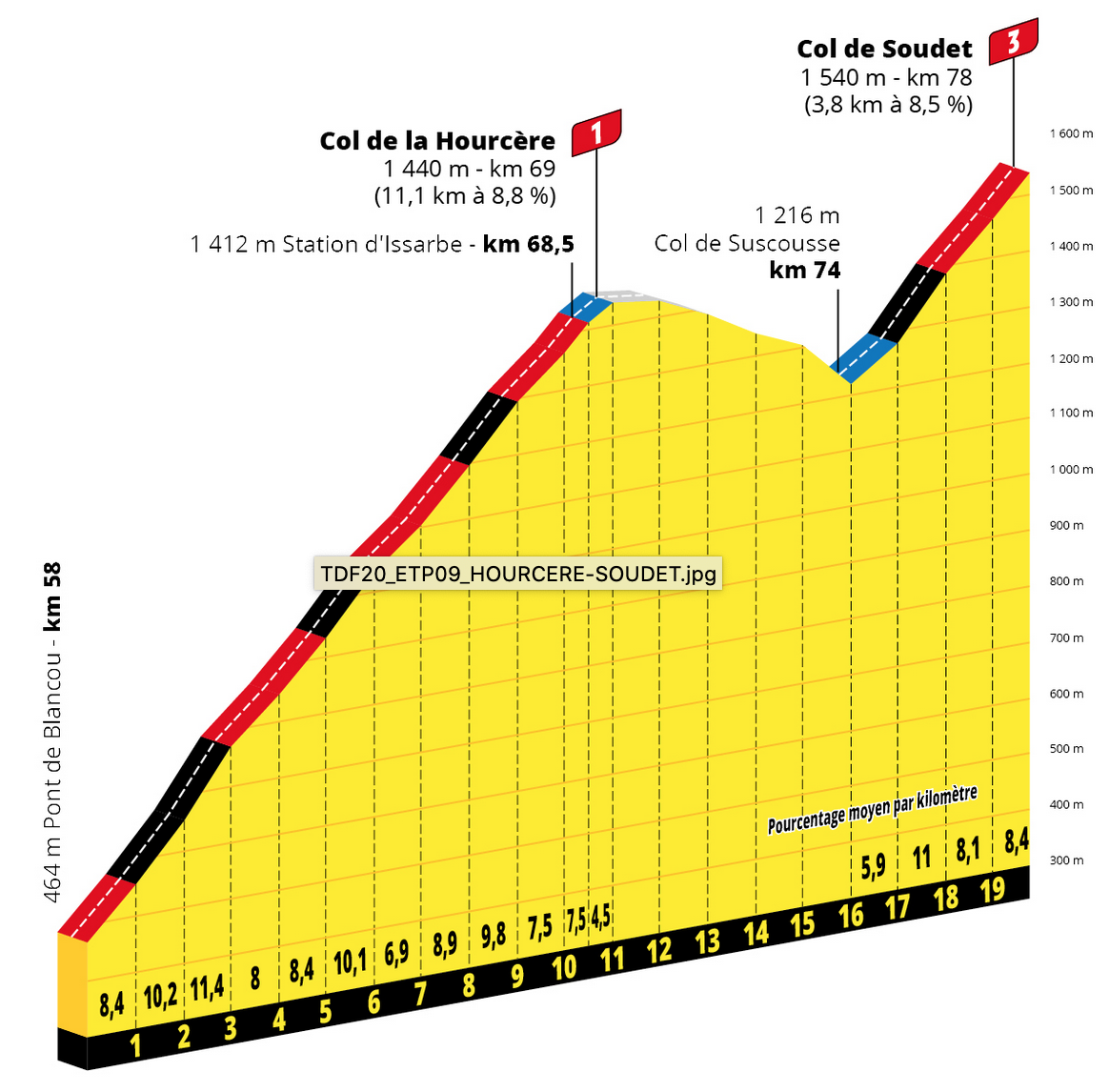 The Col de la Hourcère is a new name for the Tour and at the top the race also crosses the Seyguet, Sainte Gracie, Taillade and Suscousse passes before the Col du Soudet, a regular in the Tour… to locals it’s just the Col de Soudet via the Isarbe ski station. So a ski station access road? Not quite, Issarbe is a hut and a car park rather than a resort and the road is small and very steep in some places, there are some 12-14% sections early on and it’s hard going.

At the top there’s a fast descent for five kilometres and then a steep four kilometres up the to the Col du Soudet. The descent is fast and without any nasty surprises and there’s the intermediate sprint of the day. The Col d’Ichère is a nice even ride on the way up, the descent down is rougher and here there’s less than 10km to the final climb, a last chance to eat and drink. 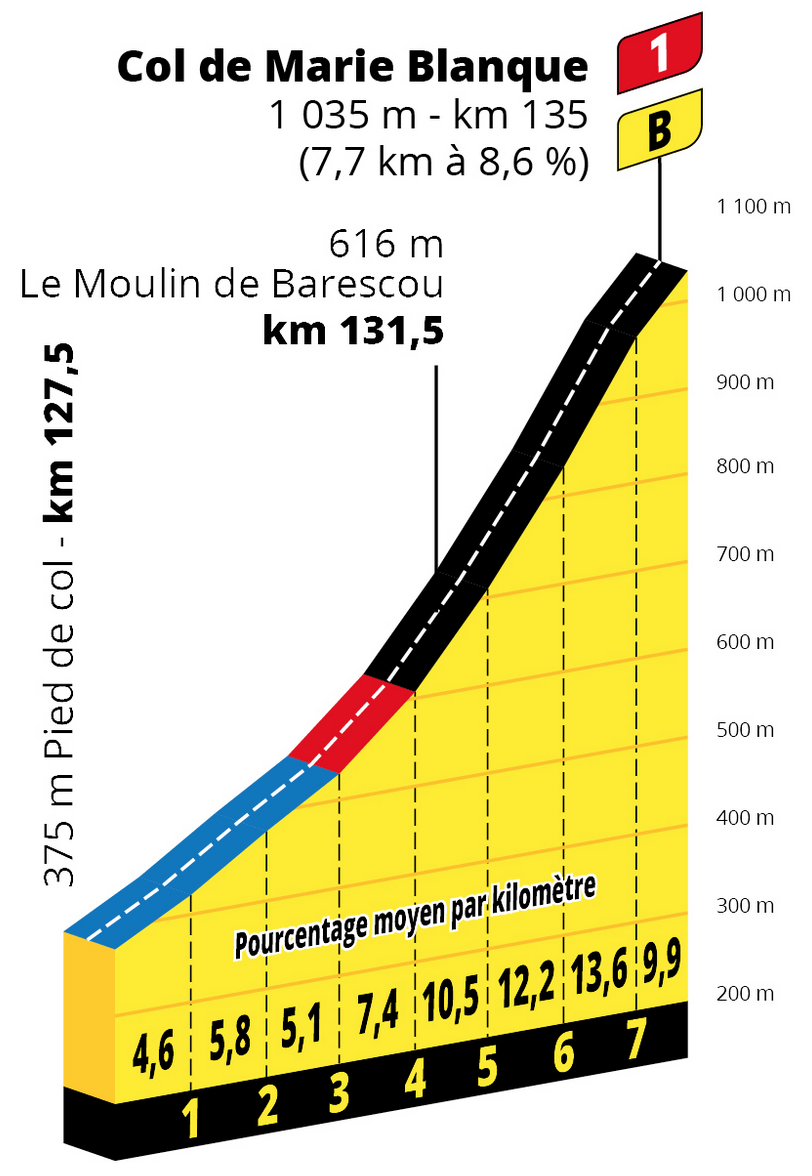 The Marie-Blanque is an unusual climb, 7.7km at 8.6% but with three kilometres at 12-13%, look closely and you can probably see marks on the left of the road where surprised cyclos click-clack their way up in cleated shoes. It’s not just amateurs, Bernard Thevenet had won the Tour in 1977 but climbed off his bike on these slopes in 1978 and Bradley Wiggins once said “This is just the mountain I don’t cope with very easily, it seems to defy analysis“. The steep section is for the most part a long straight ramp, there’s no hairpin to exploit, no flat section to recover for a moment. There’s a flat plateau section across the top before a fast descent with some tight bends.

The Finish: once off the mountain pass there’s a right turn and the riders head up the valley, there’s a slight gradient of 1-2% in places but otherwise it’s flat.

The Contenders: another good day for the breakaway and also for the overall contenders, it’s the rest day tomorrow so plenty will be all in today and hopefully we get two races today. Who’s going to win? Just sit back and enjoy the uncertainty, today’s another wheel of fortune spin, because on the flat roads there’s a lot of luck and tactics about who gets away. Julian Alaphilippe (Deceuninck-Quickstep) lost 18 minutes yesterday, once he knew he couldn’t climb with the best he pulled up the parking brake to give him room to attack. L-L Sanchez (Astana) also looked to have sat up yesterday, yes he’s ageing but he’s climbing well from the way he dispatched everyone at the Spanish championships and team mates Ion Izaguirre and Alexey Lutsenko are ones to watch. Alessandro de Marchi (CCC) was tipped yesterday but his team mate Zakarin went up the road, does he try today? Tiesj Benoot (Sunweb) has had back problems, if he’s over them he’s got a good chance. Pierre Latour (Ag2r La Mondiale) might feel it’s his time after Peters yesterday. Is Davide Formolo (UAE Emirates) retained to protect Pogačar, if he can play his own card he’s one to watch. Half of Groupama-FDJ get a ticket to ride today, Rudy Molard looks the most rested of them all.

Among the GC contenders the Slovenian tandem of Tadej Pogačar (UAE Emirates) and Primož Roglič (Jumbo-Visma) are the obvious picks. Pogačar’s floating on the climbs while Roglič is strong, descends well and can snipe the sprint.

Weather: cool and cloudy with a chance of rain and fog, it’ll warm up later, a top temperature of 20°C for the finish.

TV: live coverage from the start at 12.15pm CEST to the finish forecast around 4.30pm Euro time.