Two unusual teams ride the Tour de France, one Greek and one German, each made up of thinkers like Socrates, Nietzsche, Epictetus and Machiavelli. That’s the premise “Socrates on a Bike” but it’s also an autobiographical account from Guillaume Martin, 12th overall in the last Tour de France and with a masters degree in philosophy in his back pocket. It makes for one of the most original cycling books going and one written by an active rider too, so much so that even if it’s in French it’s still worth exploring in an English-language blog.

First a quick introduction of Guillaume Martin, he almost turned pro with FDJ but they’d filled up their roster and so he joined Wanty-Gobert instead. He became a central rider for them, unlocking wildcard invitations for the Tour de France thanks to his results and perhaps too because of his media presence given he’s French… and a little different. He’s far from the only pro to have graduated from university but he’s got a masters in philosophy which is unique. It’s an intellectual passion, a topic he returns to regularly, he’s penned columns in Le Monde, a newspaper, and also written plays too. Only he’s not keen on “the philosopher” label, it’s too reductive: he’s a good racer in his own right, he’s a climber, he’s from Normandy, he’s won several races… and he now rides for Cofidis.

The book has two threads, first is the story of the Greek and German teams as they prepare to ride the Tour de France. The Greek team is made up of famous philosophers, while the German team has fictional riders like Alltich, Ullrig and Zadel (nods to the likes of Rudi Altig, Jan Ullrich and Erik Zabel of course) plus Marx and it’s managed by a cohort of experts like Einstein. The second thread is autobiographical where Martin explains himself, for example combining his university studies with elite cycling when his tutors thought it was impossible, he’d “burn his wings like Icarus”. Here Martin sets out his love of cycling, both as a game to play, and for its physicality which is equally in opposition to, and in harmony with, the idea of philosophy. Heavy going? Not at all, it’s an easy read and intriguing. If anything the book’s only downfall is the writing isn’t clever enough, instead it’s a rather linear account without many twists, hooks and peripeteia.

The two strands are woven together in the latter part of the book which is an account of the 2017 Tour de France complete with teams of philosophers – Russell and Hobbes are on the British team, the French team has Pascal with Sartre as the directeur sportif, the Dutch have Spinoza and Erasmus and so on – but it’s all informed by Martin riding the race. Again, it’s a light read, this is no thesis and feels like a modern version of a playful Antoine Blondin column from the 1960s. Between all the philosophy and ideas Martin explains what his Tour is like, although obliquely at times. For example when Socrates wins a stage, finally he is celebrated as a winner rather than just a philosopher… Martin surely craves this too. 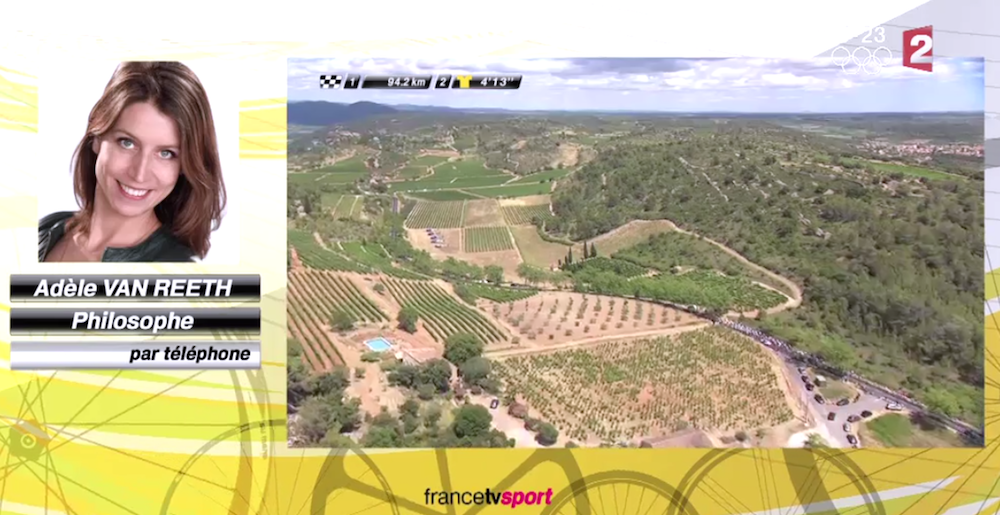 Philosophy is a big deal in France where intellectuals can be public figures and most high school students sit the philo exam. So the concept of Martin’s book isn’t as off the wall as you might think and many French readers will have a grounding in the subjects he raises. But you don’t need this, for example you can meditate on whether it’s better to train than to race, or if desire is better than satisfaction, without knowing your Nietzsche. Martin gently explains concepts through the medium of sport and the Tour de France.

The Verdict
Socrates, philosophy and cycling combined sounds lofty and could be heavy going, but here it’s all fun rather than pretentious or contrived and it’s an enjoyable read. Indeed the weak point is the book’s simplicity as it only touches and skims on the ideas and the plot is very straightforward. Yes road racing can be “200 idiots trying to cross a line first” but why and how they do this can sometimes be worth thinking about and this book can help us think about the sport differently at times.

For an English language blog, highlighting a foreign language book might frustrate as many readers as it intrigues but even if you never read this book half the point of the review here is to mention the rider. You might know Martin as the French climber from Wanty who has joined Cofidis but he’s written something like this in his spare time so look out for his next interview in case there’s something to think about.