The Rise of Aleksandr Vlasov

Aleksandr Botcharov’s been knocked of his perch. Until today he’d been the best Russian rider called Aleksandr to race up Mont Ventoux thanks to his second place on the mountain in a stage of the Tour de France back in 2004. Today Aleksandr Vlasov won the Mont Ventoux Dénivelé Challenge race ahead of Richie Porte and Guillaume Martin. Here’s a closer look at the Astana rider’s career so far.

Aleksandr Vlasov was born in in 1996 in the city of Vyborg, a place even more to the northwest of Russia than Saint Petersburg, and a place that was part of Finland for the first half of the last century. Cyclists might know it because of Viatcheslav Ekimov. Vlasov doesn’t come from a cycling family and after trying football and some judo he got into cycling from the age of seven or eight, different interviews cite both ages, but either way it’s early. After winning local and regional races he rose up the ranks. He was a strong junior, joining the Russian team to win the GP General Patton, a race in Luxembourg that’s among the best on the international junior calendar.

Many move to Italy advance their cycling careers in the U23 ranks and Vlasov could see this was the next step. He joined the Viris Maserati team in 2016. It’s based in the Milanese suburbs and the Maserati name comes from the club president, not a sports car sponsorship. At first Vlasov didn’t speak a word of Italian but in time went fluent to the point where he told Russian website rsport if he’s in Italy he can start thinking in Italian and when he returns to Russia he’ll switch back his thoughts to Russian. He had a decent start including sixth in the hard, hilly GP Capodarco. He rode the Tour de l’Avenir for the first time and, still aged 20, managed a fourth place in the summit finish to Les Carroz in the French Alps, a long, grinding climb, one place behind compatriot Pavel Sivakov. 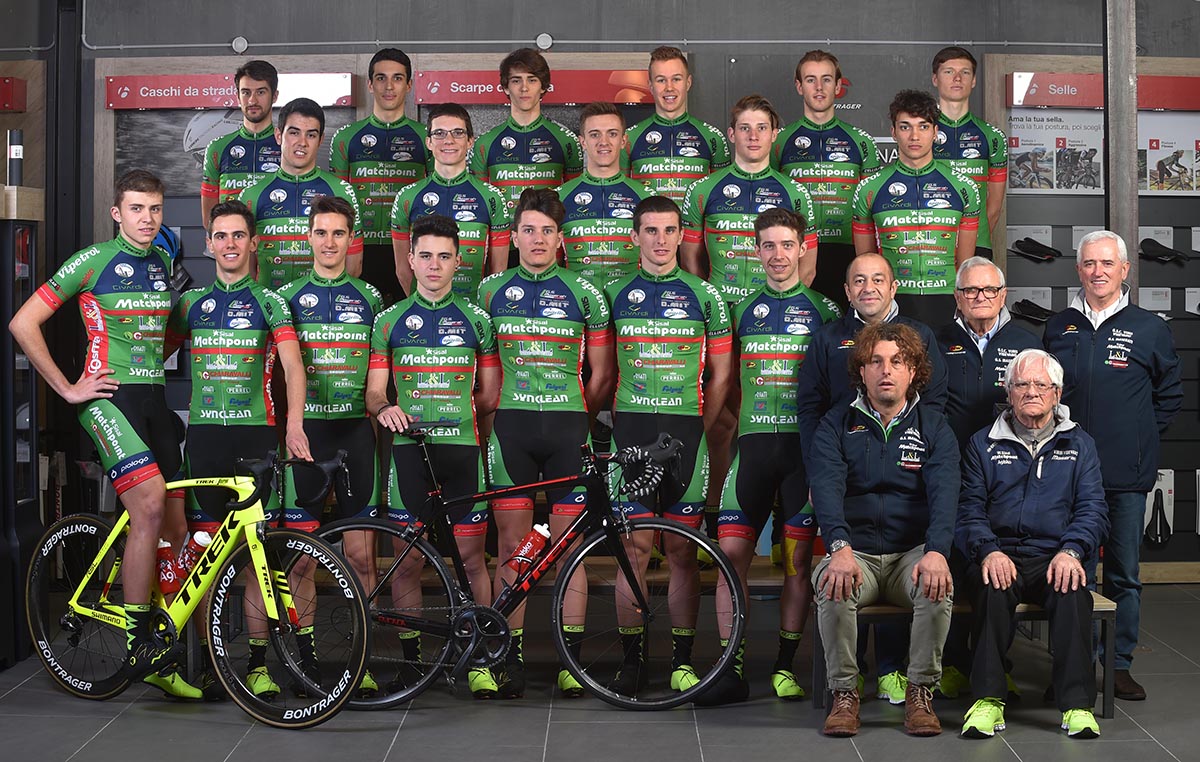 He returned to Viris Maserati but the squad’s presentation, as told by the BiciTV.it website, seemed more excited about others on the team like Jacopo Mosca and Matteo Moschetti, now both at Trek-Segafredo, plus Italo-Russian Alexander Konychev, today at Mitchelton-Scott and the son of ex-pro Dimitri. In the team photo Vlasov lurks back row and top-right of the image rather than centre stage. From here on there’s a steady rise up the ranks, 11th in the U23 Giro’s time trial stage in 2017 didn’t set the world on fire but for a climber aged 21 it put him in good company. It was enough to get a pro contract with Gazprom-Rusvelo, the de facto Russian national team with its Italian twist, think the Colnago bikes and management by Olivano Locatelli. 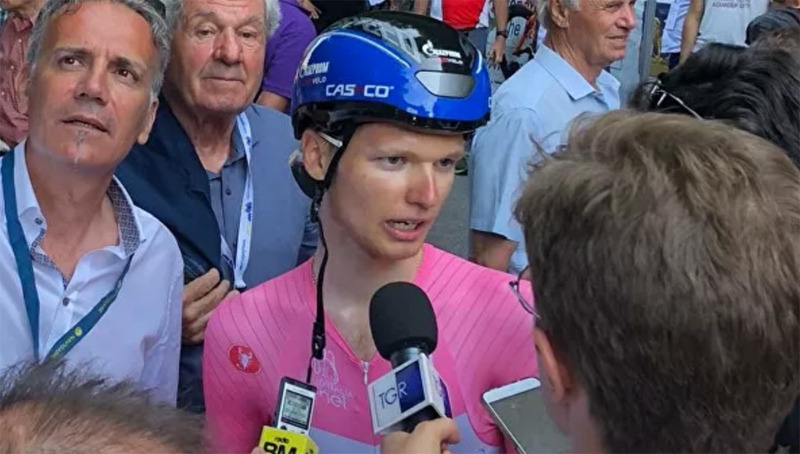 2018 was the breakout season but in the amateur ranks. Vlasov had started the season racing with Gazprom-Rusvelo in pro races like Tirreno-Adriatico and the Tour of the Alps but joined the Russian national team for the U23 “Baby” Giro in June. A man amongst babies? Yes but he was rock steady. The Colombian team with Alejandro Osorio, now at Caja Rural and Cristian Camilo, today with UAE Emirates, outclimbed Vlasov in the mountain stages, but only just. It left Vlasov just eight seconds behind Osorio on the eve of the final day’s racing, a split stage with a time trial in the afternoon and Vlasov looked set to overhaul the Colombian in the TT only for Osorio to crash with 5km to go in the morning’s sprint stage and lose the jersey.

2019 saw Vlasov consolidate with a strong ride in the Tour of the Alps. While Sky’s Pavel Sivakov and Tao Geoghegan Hart ran away with the race, Vlasov made the top-10 too and had a spell in the white jersey. Then came the pro podiums, first in Asturias, and while Richard Carapaz and Mikel Landa were in a league of their own on the eve of the Giro, Vlasov was third behind them. Onto the Tour of Slovenia and third overall again and then at the end of June, the Russian national title. While everyone was watching the Tour de France, Vlasov rode the Tour of Austria and finished 5th overall and took his first pro win in the Kitzbüheler Horn summit finish. At about this point the rumours started that he was going to Astana. When or how the deal was done isn’t public but Vlasov’s agent led the move, with Astana offering more than Mitchelton-Scott. Awkward: here was the Russian champion on the Russian national team going to arch rivals Astana of Kazakhstan and, so the whispers go, Gazprom were not very happy to put it mildly. Vlasov ended the year with second place in the Tour of Almaty.

Vlasov hit the headlines with his stage win earlier this year in the Tour de la Provence, winning on the Route des Crêtes above La Ciotat on a day when the likes of Thibaut Pinot, Nairo Quintana were expected. Still it was windy and did Vlasov win in part because he got a gap while the others marked each other, including Vlasov’s leader Alexey Lutsenko? Maybe, but you don’t drop everyone by chance and with some hindsight maybe he just rode away. But that was all we got to see before the Covid-19 lockdowns were imposed and sport was paused, the last glimpse in the weak winter light was that of Vlasov on Mont Ventoux, unable to match Quintana.

On resumption Vlasov showed even better on the Col de Beyrède in the Route d’Occitanie with a third place behind Egan Bernal and Pavel Sivakov, holding on to the Ineos tandem longer than the rest.

Winning today on Mont Ventoux is only a step onto something else. It’s a nice race with a prestigious location but the significance is the 50 minute climb and dropping the likes of Richie Porte and Nairo Quintana in a straight climbing contest, do this once and normally you can do it again. In the short term there’s also some workplace politics with Miguel Angel Lopez who’s looking out of shape at the moment but is supposed to lead Astana in the Tour de France. Will team boss Vinokourov start looking at Vlasov for an emergency substitution? Normally the Giro is meant to be Vlasov’s big target this year, albeit in service of Jacob Fuglsang. Longer term Vlasov dreams of winning a grand tour and cites Tom Dumoulin as his inspiration, “excellent in the time trials but also on climbs“.

There’s been a stream of Russian riders over the years who’ve impressed in the U23 ranks only to almost disappear in the pro ranks. Now plenty of U23 talent stalls but it seemed almost intrinsic to Russians, think Matvey Mamykin, Aleksey Rybalkin, Sergei Chernetsky, Mikhail Ignatiev, Sergey Firsanov, Anton Vorobyev and Aleksandr Foliforov who resembled U23 “meteors” that burned brightly but briefly, there was hardly time to take an interest in them, some were picks of “riders to watch” only the results didn’t follow. Besides when this blog did look at Russia rider Dennis Galimzyanov, spending an evening on Russian youtube, he got rumbled for EPO and banned soon after. Foliforov did win a Giro stage in 2016, the mountain time trial to Alpe di Siusi but oddly retired 18 months after that. Vlasov appears different, even more results in the U23 ranks and now he’s building on them with significant pro wins and ahead of some of the bigger names. He’s also looking more complete than Ilnur Zakarin, who is 30 now, and could be feature for a while which is why it’s been worth reading up about him.