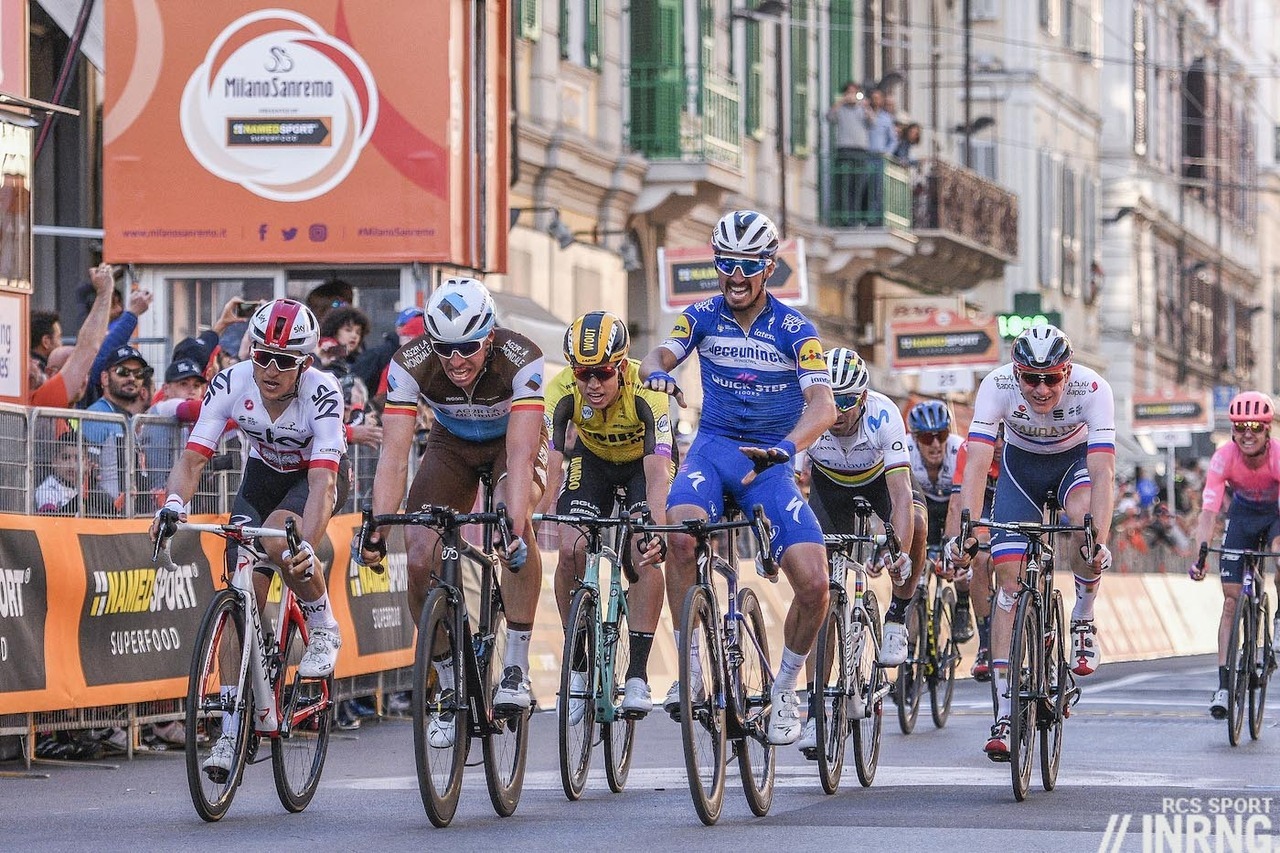 The same race but with a new route, this year’s Milan-Sanremo is hotter, hillier and longer than usual but remains as accessible as ever to a wide cast of contenders and just as elusive too.

The Route: we have one, which is good news. It’s now at least 305km. After several mayors along the Ligurian coast said no to the race for fear of road closures during the peak tourist season, 80% of the route changes and the race rides longer inland. Gone is the Passo Turchino and the long parade along the Via Aurelia, instead it’s out to Alessandria and into the Monferrato Hills and then the Langhe, land of wine, olive oil… and Nutella before dropping down to the coast in Imperia where the race picks up the traditional route.

After 120km the climbing begins. The habitual route of the Passo Turchino was a long and steady climb – a railway runs alongside it – but this time the climbing is more jagged and irregular. The road rises to Cravanzana with some 7-8% ramps, nothing to asphyxiate the sprinters but in a race where every pedal stroke counts it’ll sap them. Otherwise the climb to Niella Belbo feels interminable, a long drag and the descent is punctuated by a climb.

From the second feed zone the race starts the long climb up the Tanaro valley to the Colle di Nava, it’s all on the SS28, a big wide road that’s engineered with tunnels and viaducts to make it easy for trucks to use. So it won’t suit the climbers and punchy riders and because it’s so wide there’s less risk of being caught out of position. The descent is much steeper at first but all on the same big road, it’ll be enjoyed by the good descents but there’s time to regroup. Later on there’s a procession of tunnels (to block the TV images). Closer to the coast the road gets narrower and this is where teams will be riding like express trains to place their riders. They reach the coast at Imperia and pick up the old route.

They hit the Cipressa (more detail). This starts with sharp right hander and quickly climbs through olive groves above the coastal town of San Lorenzo, the 9% gradient bites hard after 275km. This is a proper moment of climbing that ejects sprinters, the average of 4% is a blend of a steep start and a flat portion over the top where dropped riders flounder. There’s a toboggan descent, the most technical part of the entire course. The race continues along the coastal road, the Via Aurelia where riders jostle for position for 9km before the final climb.

The Poggio (more here) starts with 9.2km to go and marks the final phase of the race. A furious pace is inevitable. A right flick off the main coastal road is followed by series of wide bends that are so fast some riders have to brake before entry despite going uphill. Positioning is everything as the road winds up, every metre matters. Unlike the Cipressa this isn’t steep, there’s one step at 8% and this is often exploited as the place to attack. After 290km the peloton’s elastic is like a old rubber band and the Poggio is just enough snap things.

The descent is fast and marked by a series of curves and five hairpins. The race has been won on the descent before and it has its technical moments, for example knowing which bend has the sunken inspection cover on the exit line helps, but this is not for virtuoso descenders, instead it suits those with power, a series of sprints out of every corner. Carrying speed into the bends matters but what matters more is being able to pump out big watts on every exit. The ramp ends with fast junction onto the main road.

The Finish: under the 1km banner and it’s left at the fountain, then right on the big wide Via Roma, the scene of wins by Merckx, Coppi, De Vlaeminck et al, it has the slightest of slopes up to the finish line.

The Scenario: is the new course harder? Yes and no. It’s longer at 305km officially and probably more, and this includes an extended neutral roll out. Distance matters, it’s the longest race of the year and compounded by the heat of dog day of August: the arid Alpine Alte Langhe instead of a sea breeze. There’s an extra 500m of vertical gain but later it’s on wider roads, anyone attacking will find it hard to outride the peloton. The Cipressa’s the hardest climb but it’s been a quarter of a century since a winning move was launched there, ever since the winner’s jumped on the Poggio, gone on the descent, attacked into Sanremo or won the bunch sprint, it’s always that late.

One other change for 2020 is there are teams of six which reduces the organisational capacity of teams to control events, teams rarely reach Sanremo with two riders, it’s usually down to the leaders. What might matter most is that it’s simply different. There’s no playbook, no precedent so when 27 team managers give their briefing on Saturday morning they’ll talk in the conditional, “it should be a sprint” but they don’t know for sure. For a case study see the 2013 Liège-Bastogne-Liège when roadworks meant the habitual Roche aux Faucons climb was replaced by the Colonster climb and the pattern and rhythm of the finale felt different. 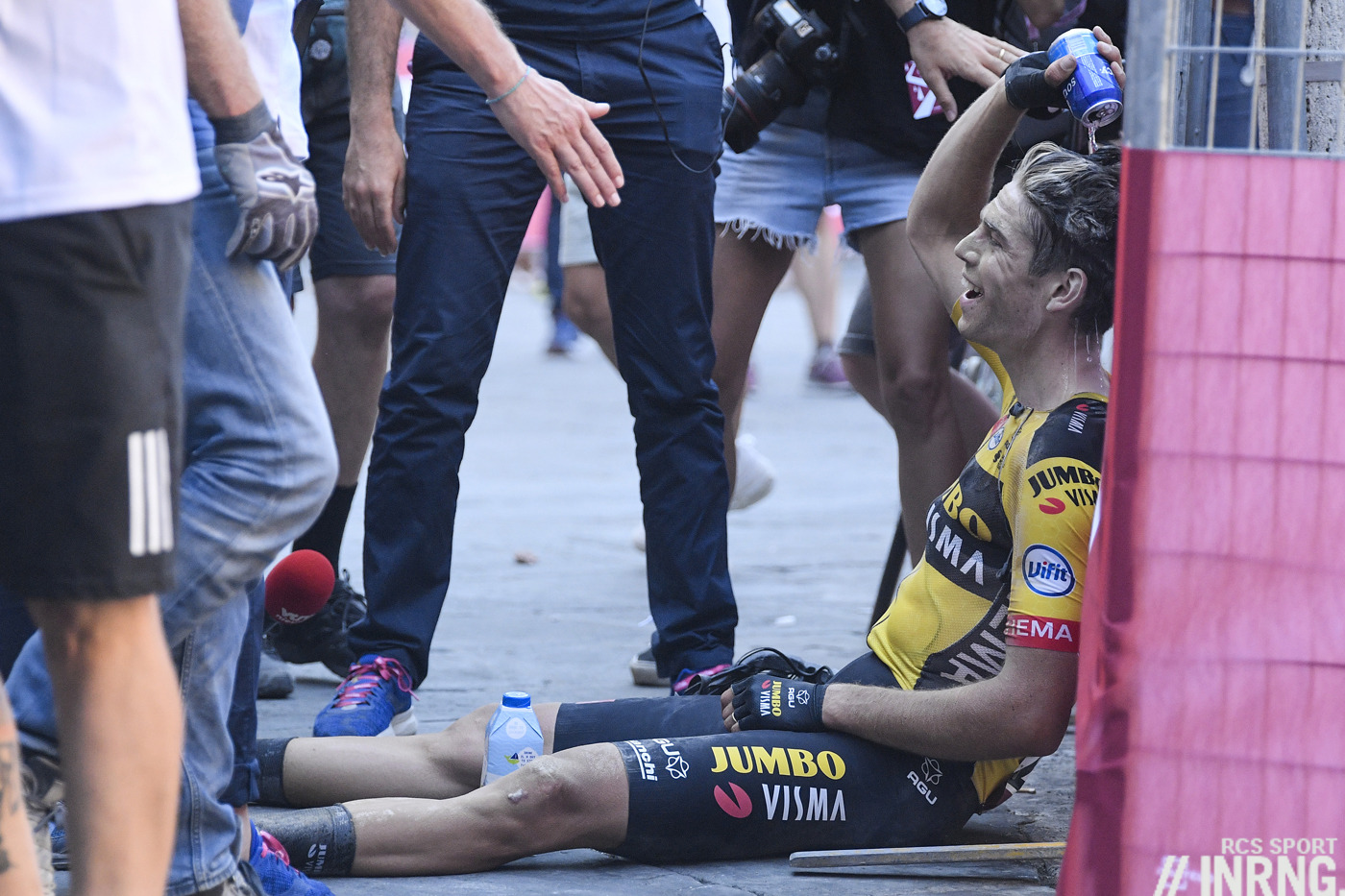 The Contenders
There’s not much to go on as riders have only resumed racing and now face 300km in broiling heat. Part of the charm of this race is that so many riders on the startline can hope to win, it’s a classic that’s accessible to sprinters and grand tour winners alike with plenty in between.

Wout van Aert (Jumbo-Visma) is the lead pick. He went solo on last weekend’s Strade Bianche and mid-week finished second in Milano-Torino and its his form and versatility that makes him a prime contender, he can go on the Poggio, he’s ideal for the descent and he’s won bunch sprints before and heat doesn’t seem to be a problem.

Greg Van Avermaet (CCC) has been looking strong, but as ever how to convert this to a win? Ideally to follow a move over the Poggio and win in the sprint, feasible but far from certain. Team mate Matteo Trentin is suited to this race too.

Julian Alaphilippe (Deceuninck-Quickstep) had six punctures and several bike changes on the Strade Bianche but the main thing is his form, he says he’s improving but not yet 100% so he’s not the prospect he was last year when he was winning stages in Tirreno-Adriatico. Bob Jungels and Zdeněk Štybar bring more options with the latter probably the best in form.

Oliver Naesen‘s yet to win that big race and he knows it, he’s been close so often and has been working on his sprint of late. He climbs surprisingly well so the finish suits. Michał Kwiatkowski (Ineos) won here before and his form seems good but is he as explosive and sharp as before? Team mates Gianni Moscon, Filippo Ganna and Dylan van Baarle can all feature too. Alexey Lutsenko (Astana) leads a team without a sprinter and so has an interest in a lively race, even if Alex Aranburu is fast but the problem is there are faster. Mathieu van der Poel (Alpecin-Fenix) can do everything but he hasn’t had a top-10 on the road this year which is unusual so he’s not the red hot pick he could have been. Michael Matthews (Sunweb) is an archetypal rider for this kind of race as he can climb and sprint and it’s a regular target but there are punchier riders and faster sprinters.

Philippe Gilbert (Lotto-Soudal) dreams of triumph here and he’d be a popular winner as he’d complete the grandslam of all five monuments. But he’s older now and less explosive, it’s hard to see him getting the jump on his rivals. Still the new course might open up things for him. 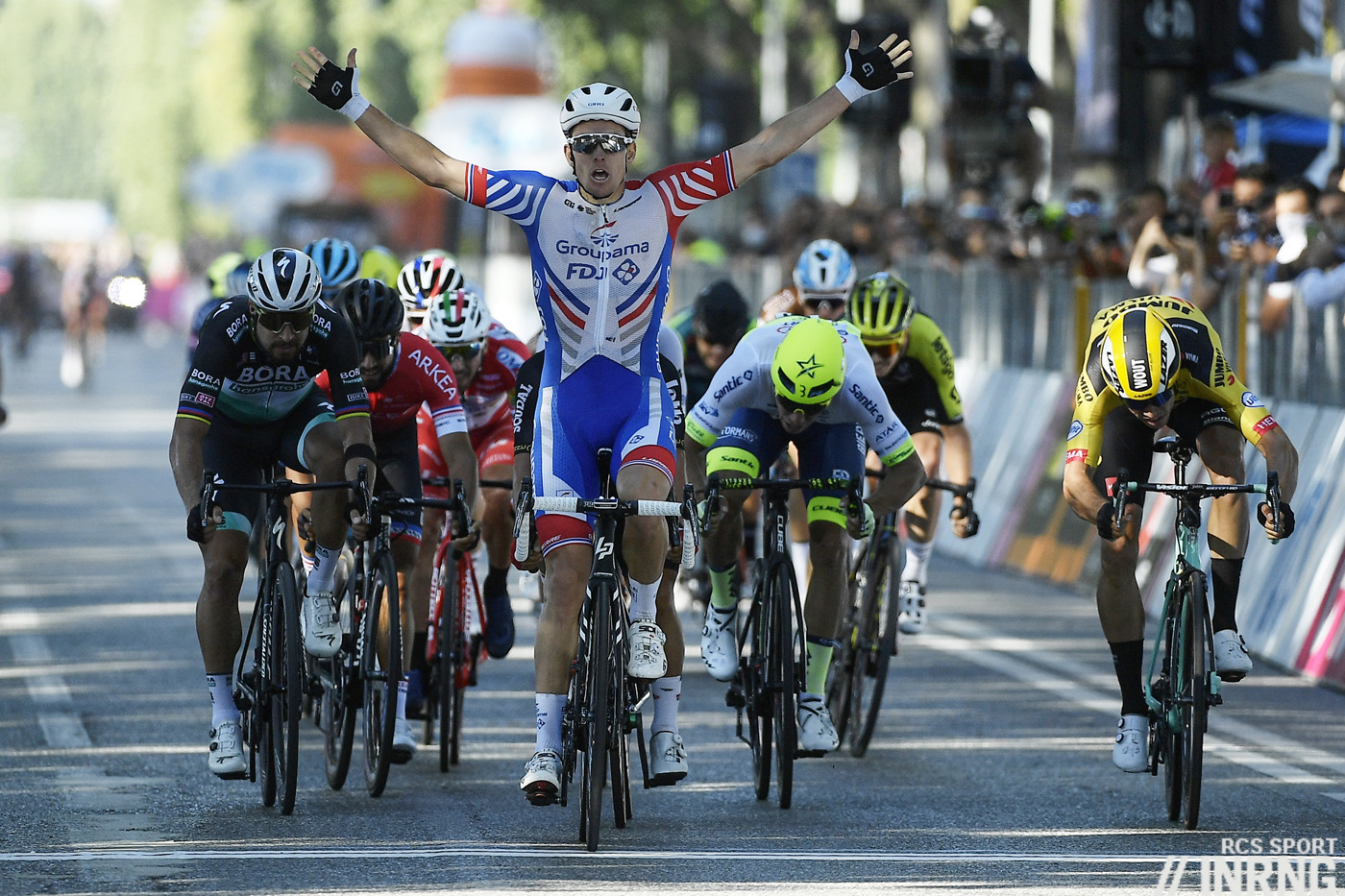 Arnaud Démare (Groupama-FDJ) won Milano-Torino and is in top shape. But like all the sprinters if you could replay the finish again and again the result might vary and Démare’s win rate is not as efficient as the others and he’s got a tendency to jump early which is ideal for those battling for his wheel. Fernando Gaviria (UAE Emirates) won a stage in Burgos and with some margin on the rest and has Alexander Kristoff for company but will it be too hot for the Norwegian hulk? Caleb Ewan (Lotto-Soudal) can win big, has been targettng this race for years now and has an excellent win rate. Peter Sagan (Bora-Hansgrohe) is 30 now and has yet to win in Sanremo. The race seems made for him, he can pounce on the Poggio, ace the descent or just win in the sprint yet the win here’s proved elusive. Sam Bennett (Deceuninck-Quickstep) is versatile, the hilly finale suits him but in a straight sprint he’s less of certainty and has team mates who will want to avoid a sprint, which means Bennett can sit tight but also that he can see his colleagues go up the road with others rather than have them to chase down moves. Elia Viviani is fast had has a Cofidis team around him. Giacomo Nizzolo (NTT) places more often than he wins but can pop up for a podium, the same with Ben Swift (Ineos). Nacer Bouhanni (Arkéa-Samsic) could have been on the podium here before, on his best days he can float over climbs that sink other sprinters but Sonny Colbrelli (Bahrain-Merida) took a hard stage of the Route d’Occitanie. Finally among the sprinters there’s Niccolò Bonifazio (Total Direct Energie), the local and he won a stage of Paris-Nice this year with an explosive jump that saw him just ride away from his rivals. There are even more sprinters but this is a long enough preview already and remember the Sanremo finish isn’t your usual bunch sprint, it’s as much a test of stamina as speed with typically 20-30 riders in contention.

Finally there’s Vincenzo Nibali (Trek-Segafredo), capable of anything on a good day and he’s in good form but the Giro is his big goal and that’s months away.

Weather: hot and sunny. Temperatures will reach 35°C inland and it’ll be a cooler 30°C on the coast for the finish but these are shade temperatures, it’ll be hotter in the sun and on the tarmac. There’ll be a slight tailwind for the hilly section inland, not enough to speed the race on but it could help cook a few riders.

TV: who knows who will win, the pleasure is seeing how it all happens. The race starts at 10.50am CEST, TV coverage begins at 3.30pm and the finish is forecast for 6.30pm.