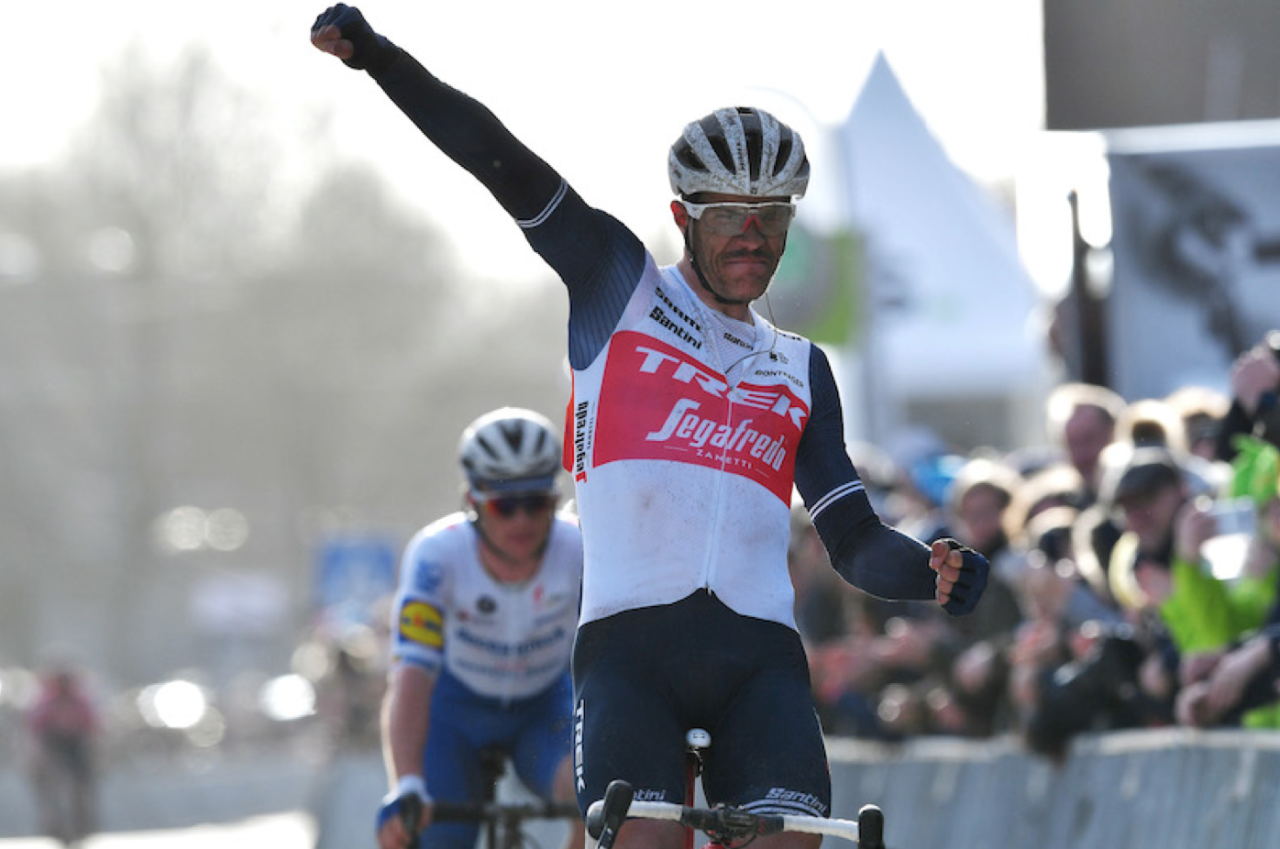 It was a good openingsweekend. The Omloop Het Nieuwsblad was a lively race with a satisfying finish. We saw a big breakaway with 100km to go, then the winning move of seven riders form with over 70km to go and then this was whittled down on the Kapelmuur and Bosberg to a trio. Jasper Stuyven and Yves Lampaert cracked Søren Kragh Andersen on the run to the finish before Stuyven took an important win. He’s had a lot of pressure on his shoulders since turning pro, more when Fabian Cancellara retired. But among the spring classics there’s been only Kuurne-Brussel-Kuurne to show for it so far on his palmarès. The Omloop isn’t everything but it puts him in a decent position now.

Sunday’s Kuurne-Brussels-Kuurne was improved by the course change, it’s more Flandrien now with fewer laps of the around Kuurne in the finish. Kasper Asgreen must be a fan of the new course, arguably if he had to do more laps the chase behind would have got him because they could measure their efforts… but remember Bob Jungels and Jasper Stuyven have both taken similar solo wins in recent years. Still it’s often been a race reserved for the sprinters only feels less so now. The new course is better, it works especially as it’s the start of the season when we can’t get enough of the cobbled bergs. But it does feel like almost every race in Flanders is coalescing around a similar format with climbs and cobbles thrown in late to split the field. Tomorrow’s Le Samyn has more pavé, the Omloop used the old Tour of Flanders finish, Gent-Wevelgem used to be for the sprinters but has got harder and is now a mini Ronde too and so on. It’s understandable, the same formula applies to the grand tours which are also reducing the number of sprint finishes and adding in lively climbs. 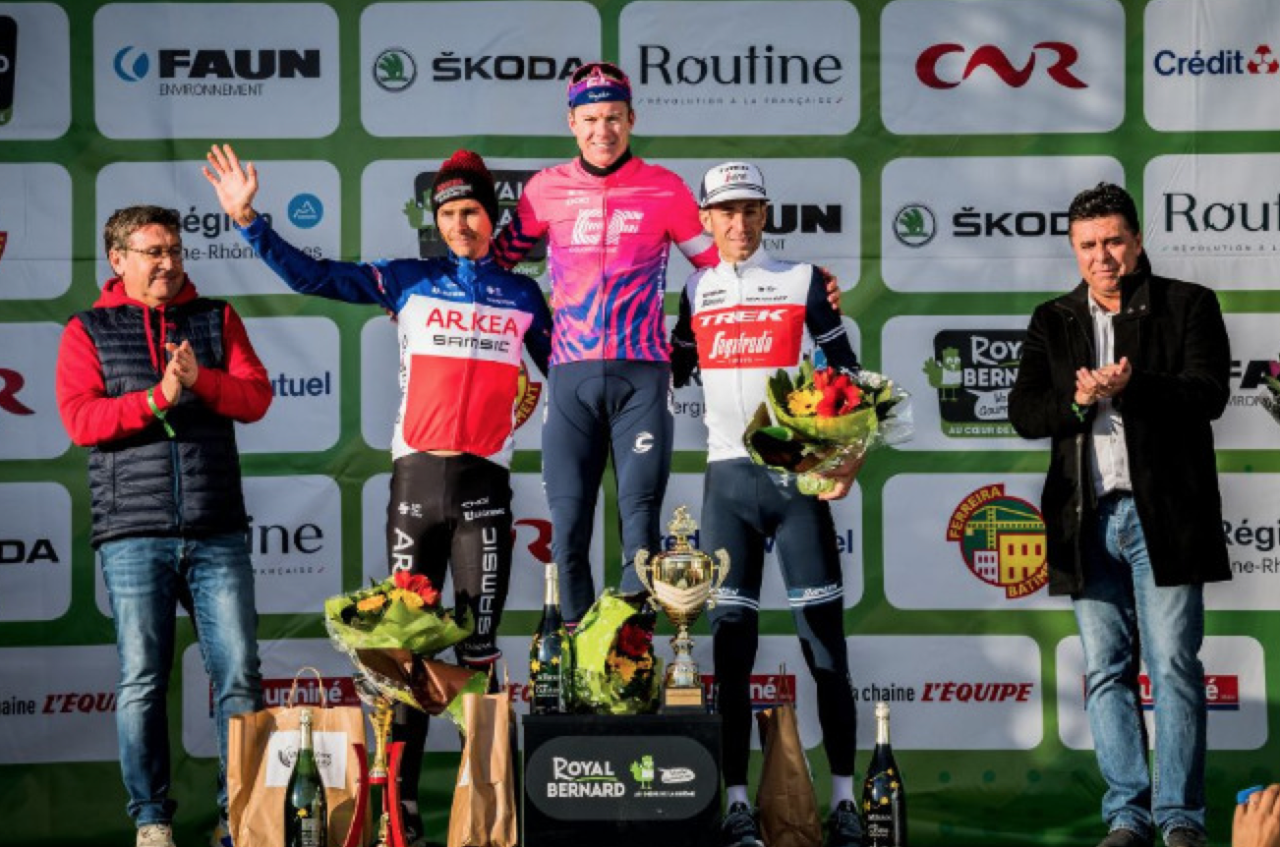 There was racing in France too with the Ardèche and Drome Boucles. Rémi Cavagna did a huge ride to win the Ardèche race on Saturday, a 182km breakaway, much of it solo. Whole teams chasing on the front at one point and the gap barely fell. He got comparisons with Jens Voigt for his breakaway style but he’s also a TT specialist with good technical skills… in a straight line. You might remember his awkward descending in the Tour of California and in the wet last weekend this was evident too. Sunday was less successful for Deceuninck-Quickstep as Julian Alaphilippe struggled in the finish, his hopes for Paris-Nice taking a knock. Was it the cold rain too or is his form short? Simon Clarke showed the better finishing skills to beat Warren Barguil and Vincenzo Nibali after a strong display from the US team and Nibali had been making multiple moves. These are two handy races and attempts to streamlines the calendar don’t work as a large share of the peloton wants hilly races like these as opposed to cobbles. 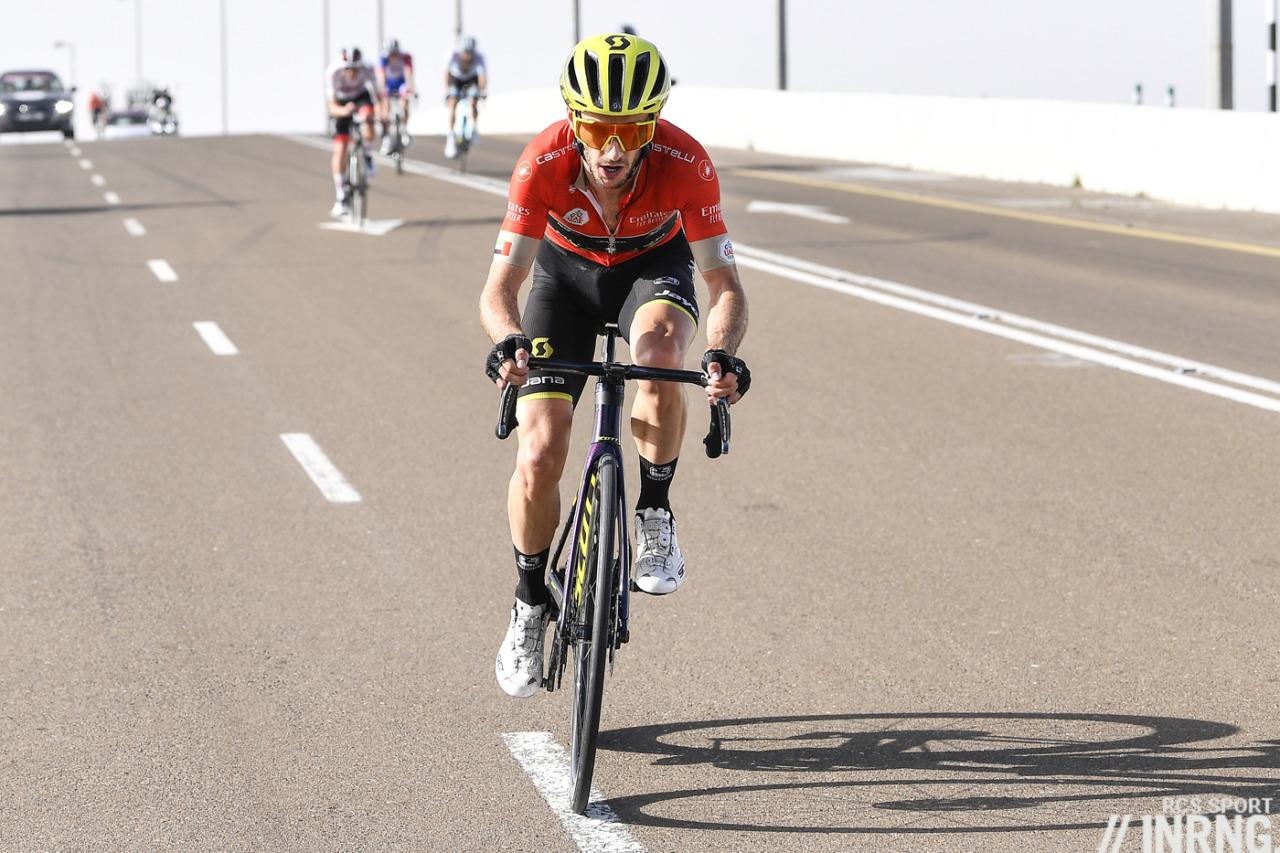 It seems the UAE Tour was cancelled out of panic and precaution rather than actual cases of Covid-19. Sporting wise we didn’t miss too much, Adam Yates had the GC sewn up and two likely sprint finishes were skipped. Yates has gone from 75-1 to 25-1 for the Tour de France with the bookmakers. Several teams are still in Dubai, unable to get out and unsure what is going on. The Abu Dhabi authorities buy in cultural and sports events because they need to fill their cities with cultural attractions. Only this time in their desire to import some Italian culture they got more than they bargained for.

What next for the sport with the spread of coronavirus? Perhaps the cycling world is rather trivial compared to a public health epidemic that might become a pandemic but it’s this blog’s niche and you haven’t come here for the virology so let’s explore the narrow angle. Already other sports have seen games postponed, matches held inside the stadium without spectators and other restrictions. So far pro cycling isn’t interrupted. Italian race organiser RCS has told the teams today that Strade Bianche, Tirreno-Adriatico and Milan-Sanremo are going ahead. The teams need to know this in order to pack gear from their service course into their trucks and head for Italy in the coming days. But that’s only because nothing has been cancelled by the authorities so far. Cancellations of events are rarely voluntary from event promoters at the moment, instead they’re happening because of national and regional decisions by governments and health authorities.

Meanwhile in Paris,A ASO, the rival race organiser to RCS,  has seen an event halted. Not cycling but running as the Paris Half Marathon was supposed to happen last weekend but didn’t. However it’s been postponed to an unknown date for the moment which is good as it is signalling current problems will be overcome… handy too as it means tens of thousands of entry fees do not have to be refunded for the time being.

If the virus does spread and cause races to be postponed for public health reasons it’s the tiny events with shoestring finances outside of the financial umbrella of RCS, ASO and Flanders Classics that are at the greatest risk. The other risk is to riders who risk finding themselves in repeat of the UAE scenario where they or possibly a third party in a hotel or aircraft comes down with symptoms and people are quarantined or told to “self isolate”, as in stay at home for a fortnight. But all this is up the air, nobody knows.