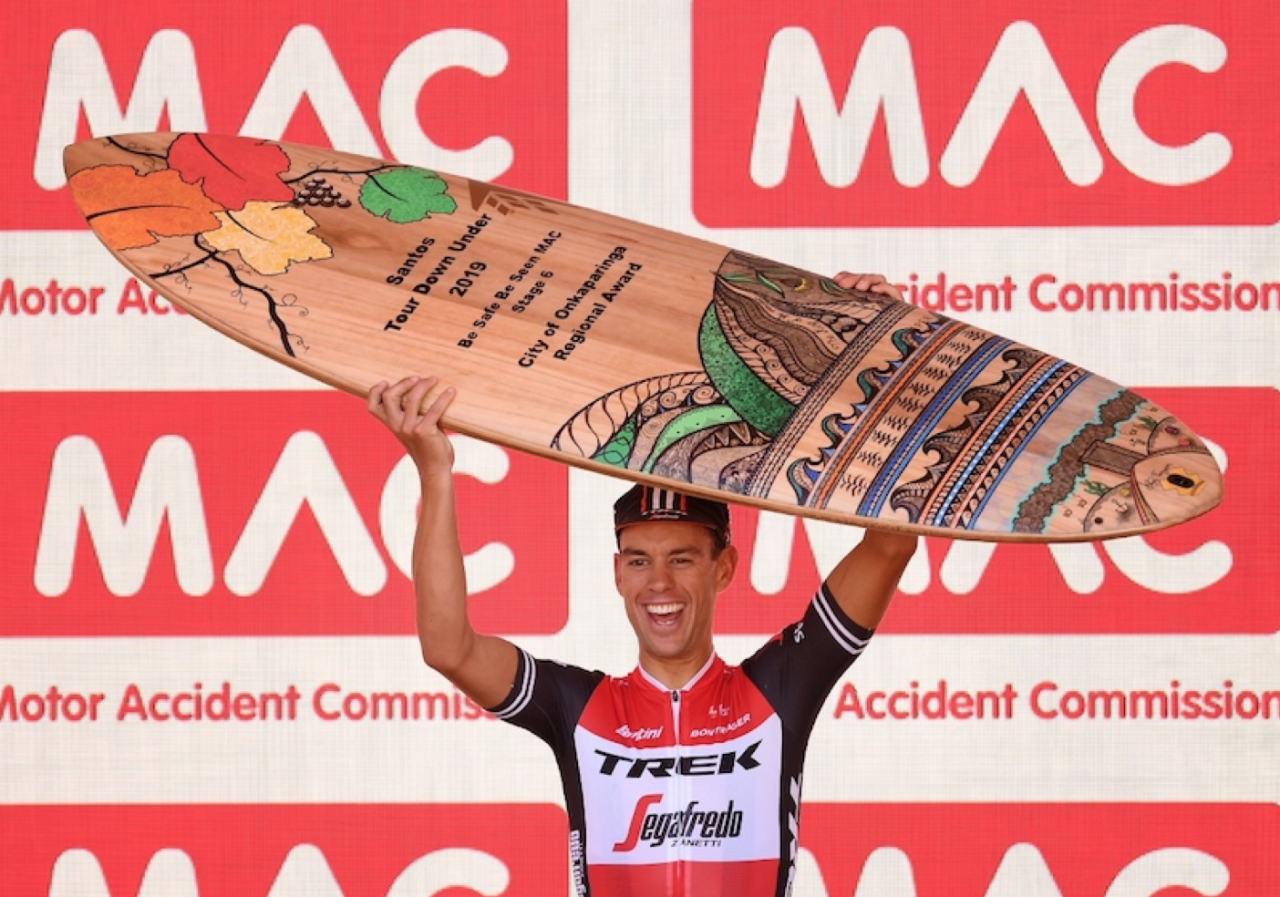 A look ahead to the Tour Down Under with the stages, contenders, TV coverage and more. It’s billed as the hardest edition yet but this is a matter of degree, it’s still a fine race where time bonuses often shape the final result as much as any climb.

There’s a criterium this Sunday but it’s separate from the stage race which begins on Tuesday, an exhibition event in downtown Adelaide. It’s still important as it’ll show us who is sprinting well.

Stage 1 – 150km, Tuesday 21 January: a likely sprint finish in the Barossa valley. There are five laps of a 30km circuit. The race heads for Angaston where there are two intermediate sprints at 15km and 75km and on the way out of town they climb Breakneck Hill but may not break a sweat as it’s only a short bump but the mountains jersey is on offer at 46km and 106km. The finish line is a long flat road.

Stage 2 – 136km, Wednesday 22 January: the traditional Stirling stage with four laps of the hilly finishing circuit. The road rises to the line, levels out and then rises again. This is often a sprint from a reduced group and shapes the final result, any gaps between riders can count and the time bonus are precious.

Stage 3 – 131km, Thursday 23 January: an uphill sprint into Paracombe. The race has used this finish before and each time the stage winner has taken the overall lead and kept it. The stage crosses Cudlee Creek which is one of the bushfire damaged areas. The approach to the final climb is crucial, the twisting Gorge Road will see teams scrapping to place their leader near the front for the final climb. Torrens Hill is 1.2km at 9%, a sharp effort and then there’s a flat section just before the line.

Stage 4 – 153km, Friday 21 January: a likely sprint finish but watch out in case the wind gets up as the road from Mount Torrens onwards is exposed as it runs along ridgelines. The finish in Murray Bridge has its technical moments with a left turn onto a road that rises and falls and then there’s a sharp right turn with 300m to go.

Stage 5 – 149km, Saturday 25 January: a probable sprint finish but in 2016 the climb up Brown Hill/Crow’s Nest Road and the run to the finish saw the race split. The finish in town is flat with a right hand bend with 700m to go, a left bend with 600m to go before the finishing straight.

Stage 6 – 152km, Sunday 26 January: the classic Willunga stage, laps of the vineyards before climbing Old Willunga hill twice, once to roll through the finish line, the second time for the end. Willunga Hill is the key, it’s 3km at an average if 7.5%, a steady gradient and a wide road most of the way and exposed if there’s any wind too. It’s a tactical finish, being on the right wheel matters as the speed is so high, the idea is to ride the slipstream of your rival and then strike out as late as possible, but before everyone else. Forecast finish time: 2.25pm ETA / 3.55am GMT / 4.55am CET / 10.55pm EST (Saturday).

Open for business: You’ll have seen the wildfires on the news but the state of South Australia has been relatively spared. The course does cross some areas ravaged by a fire but it’s been extinguished. If you’ve tuned in for the race before you’ll have spotted the way the TV coverages switches from race coverage to advertorials promoting local places as a tourist attraction. It’s this “open for business” and “come and visit” message that the race wants to get across in an normal year, and even more so at the moment. As long as emergency services aren’t too pressured the race will go on, the women’s Tour Down Under is taking place as normal. There are still serious ongoing fires on nearby Kangaroo island and air quality could be a problem if the wind blows from the west but for now it’s fine.

The Contenders
This is a delicate race, the road-going version of a track points race where tiny gains early such as an intermediate time bonus can make all the difference. With no time trial nor a big summit finish the race is often very close, no more than in 2018 Daryl Impey was tied for time with Richie Porte but won on countback, he’d placed higher across all the stages than Porte. In the past decade there’s been an average of 41 seconds between first overall and tenth on GC. This year’s route apes 2015 and 2017 because of the Paracombe finish, to call it a summit finish is too much but the finish does open up time gaps and could shape the race result as much as Willunga.

Mitchelton-Scott are the home team and bring a very strong squad. Daryl Impey has won the last two editions of the race. While others were enjoying their off-season in October, Impey was back in training to try and win his third edition. He can contest bunch sprints, he’s punchy for the hilly finishes and can hold the pace on Willunga. But aged 35 things won’t be getting any easier and the Paracombe finish is harder for him. Cameron Meyer is the new Aussie champion and won the race back in 2011 and is another rider made for this race, he’s got quick finish and can climb Willunga with the best but his career wins on the road are small. Lucas Hamilton had a great time at the Aussie championships and is one to watch on the climbs but he probably won’t be hustling for time bonuses. Mitchelton-Scott also bring Simon Yates, his form is unknown and he could be working in the hope others repay him later this year but has been out in Australia for some time.

Richie Porte (Trek-Segafredo) is about to turn 35 as well. He’s won on Willunga every year since 2014 but has only won the race overall once in 2017. Just repeating the Willunga win would be a solid start to the season. His problem is the other stages, he’s not going to be taking time bonuses in the sprints so he needs a strong punch in Paracombe and then a repeat on Willunga again. As much as he’s a fixture here the form now is unknown after a tricky 2019, he hasn’t raced the Aussie nationals. 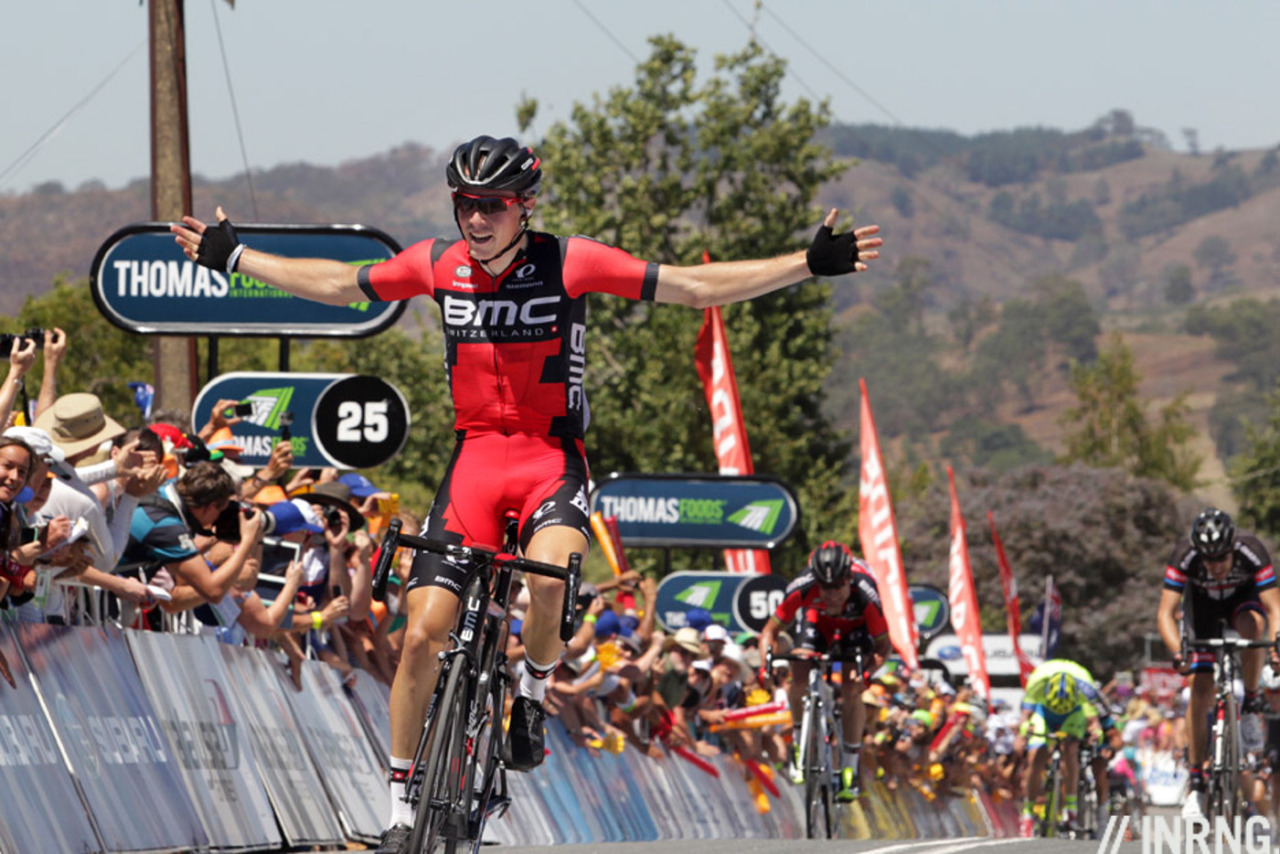 Rohan Dennis (Team Ineos) has won here before, he won in Paracombe (pictured) and can handle a climb like Willunga very easily, remember only he could match Egan Bernal on the mighty Furkapass in the Tour de Suisse. Pavel Sivakov and Dylan van Baarle bring support for the overall.

Nathan Haas (Cofidis) could feature but how to win? He’s quick in some sprints and looks to be in good form after the nationals. George Bennett (Jumbo-Visma) climbs fast and is both a precious helper and an ambitious rider and team mate Chris Harper one to watch this season. Romain Bardet (Ag2r La Mondiale) starts his alternative season – he’s riding the Giro, not the Tour – here. He could feature on Paracombe and Willunga but says he’s coming for experience rather than podiums; his team mate Andrea Vendrame could be more suited but his form’s unknown.

Astana bring L-L Sanchez who is often a fixture in this race – he won it in 2005 – but more recently tends to place than win while Omar Fraile is punchy. Diego Ulissi (UAE Emirates) has often done will in this race but how to win? The same for Jay McCarthy (Bora-Hansgrohe). Ben Hermans (Israel) is strong on these climbs, Rob Power and Jai Hindley (Team Sunweb) could make the top-10, Neilson Powless (EF Education First) is strong but a World Tour win, even here, seems a big ask.

Finally a sprinter could still win as long as they can ace several stages. Win three and they harvest thirty seconds of time bonuses which might do the trick if they can limit their losses on Paracombe and Willunga. Sam Bennett (Deceuninck-Quickstep) is perhaps the best climber of all but it’s hard to see him winning all the time when Caleb Ewan (Lotto-Soudal), Elia Viviani (Cofidis) are in the field.

Weather: the long range forecast says it’ll be mild, a top temperature of 27°C and the chance of rain.