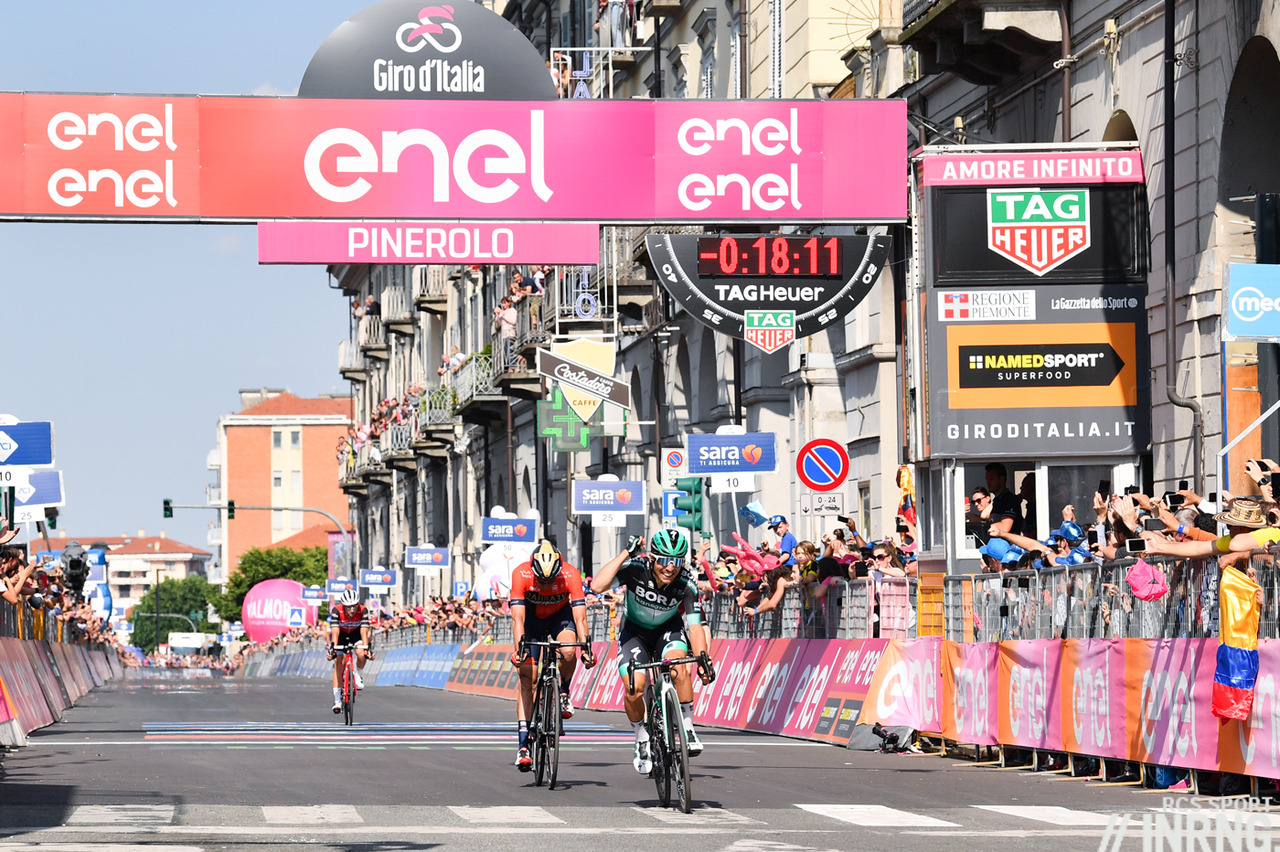 The second of this year’s racing highlights is the Giro’s 12th stage. The race finally came alive and the stage result was uncertain until the very end when Cesare Benedetti, a long time worker, finally got his day in the limelight.

When the Giro was unveiled the opening stages looked plain. Normal, the problem here was the opening phase lasted for half the race and rather made a mockery of claims at the time that the Giro “gets it when it comes to designing an attractive parcours“. It turned out a municipal mess meant route had to be redrawn but still you wondered why the race stuck to the plains when so often when Italy’s geography allows Giro to turn inland for some instant climbing. Perhaps the stages were already so long that it could have been too much to start twisting and turning? Either way it made for a sluggish start to the race, the sprints were varied but meant you could often tune in for the final ten minutes and the “fight for pink” saw Jumbo-Visma happily donate custody of the maglia rosa to UAE Emirates. The stages to San Giovanni Rotondo and L’Aquila saw breakaway success but this wasn’t vintage stuff.

On paper Stage 12 wasn’t that promising either. From Cuneo to Pinerolo it was sold as a tribute to Fausto Coppi’s great 1949 Alpine raid between these two towns. Only his legendary raid went over some giant climbs, this year’s stage didn’t and the day’s main climb went via a village called Montoso and on paper didn’t look like much either. Only riding it before the race quickly changed that impression, it’s a very selective climb. 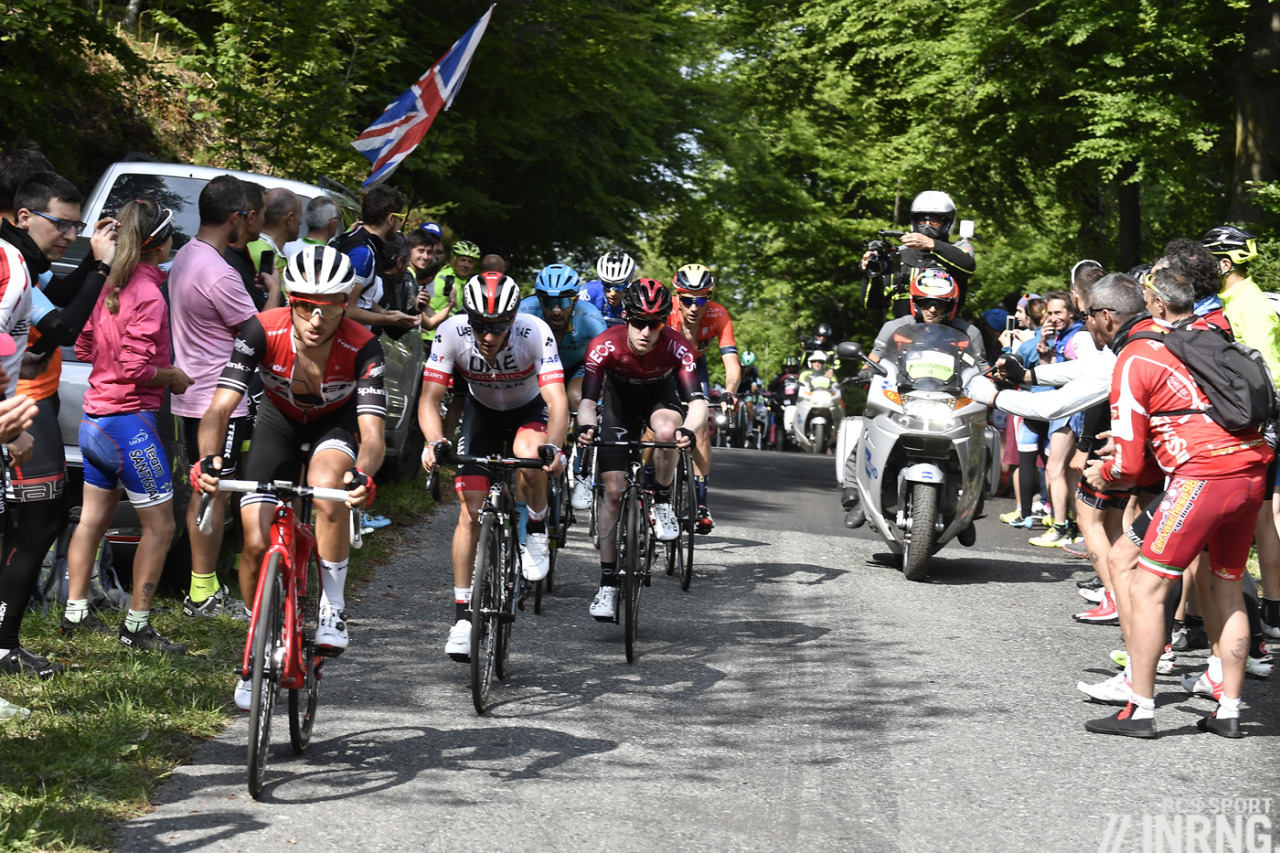 We got two races for the price of one. An early break of 25 riders contained a mix of riders, including some optimists who went clear but would struggle with the climb to come. As a review, it would take too much time to write-up an account of the stage in full, the idea is simply that the scenarios kept changing before, during and after the climb to Montoso. It was like watching a lava lamp as groups formed and and then split but with Gianluca Brambilla as a constant presence and the most active and in the picture above you can see him pulling a group of climbers away.

Back in the peloton and Astana put the Hirt on, as in Jan Hirt. He accelerated on the lower slopes of the Montoso climb and the peloton went to pieces. Soon his team leader Miguel Angel Lopez attacked and was joined by Mikel Landa. Swashbuckling? More like straightening out the swords they’d bent earlier in the race and the sort of thing you can do as a GC contender over four minutes down on your pre-race rivals. Still it was exciting in the moment and better than the race sitting tight while behind some outside contenders for the Giro and a top-10 saw their hopes vanish.

If the climb was on a small rough road through woodland, the descent was the opposite: almost a motor racing track with long straights and big bends. This might have helped Cesare Benedetti get back to the front group alongside the better climbers as did a couple more to make seven riders in the lead, and all with the cobbled “wall” in Pinerolo to come. 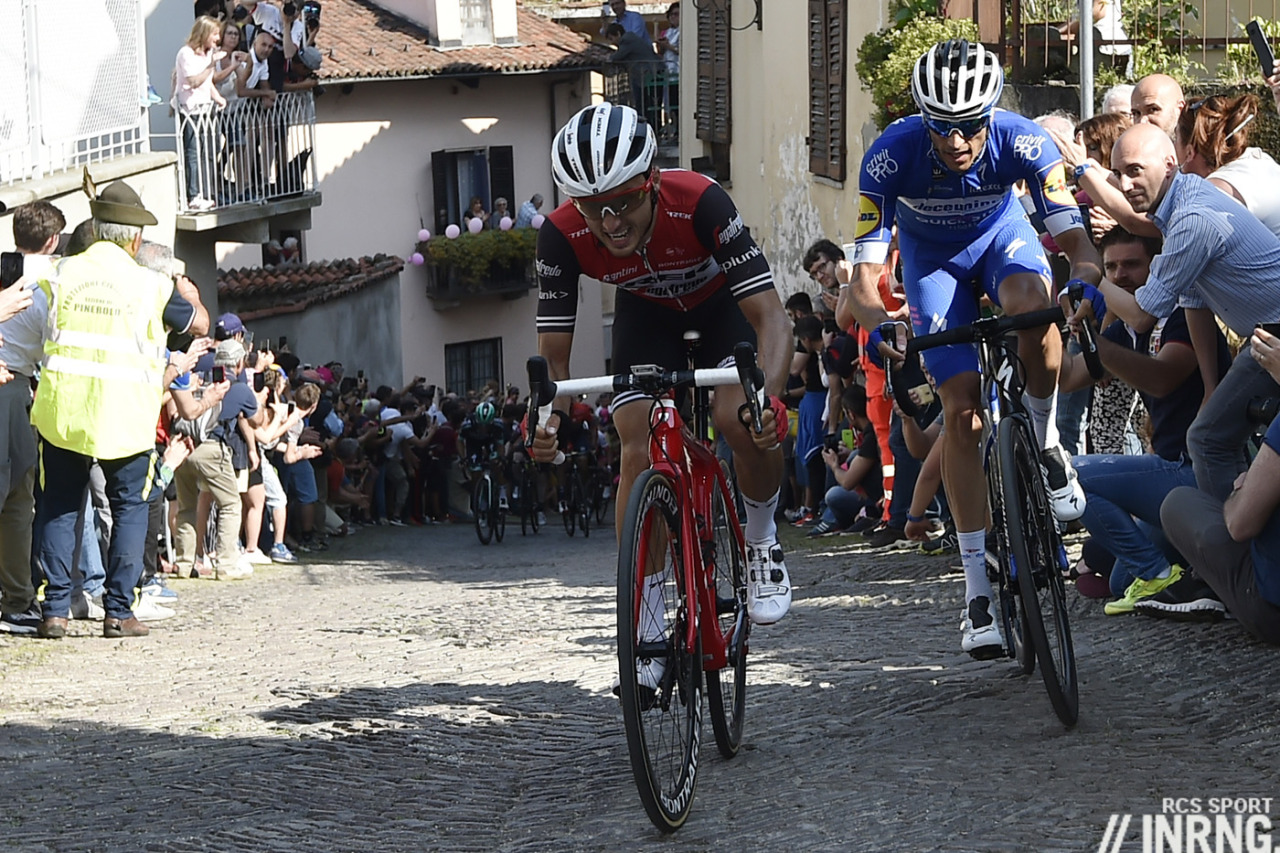 In the finish Brambilla attacked and went clear with Capecchi with Dunbar missing the move and having to chase and catching the pair in the final kilometre. Who would win: Brambilla had been all over the stage; Capecchi, well Deceuninck have that habit of turning podium places into wins; or Dunbar to salvage something for Ineos in the Giro? Just as you weighed up their chance Benedetti and Caruso caught the trio. As racecraft what came next wasn’t a masterpiece with riders launching early, taking awkward lines through corners but all of the riders are helpers and in a career-defining moment. Brambilla launched, Dunbar followed but Benedetti was the strongest and took his first pro win, aged 31.

Why the highlight?
There’s the satisfaction of seeing a modest rider winning, a gregario getting their day. Benedetti had the fortune to sit next to special guest Eddy Merckx on RAI’s Processo alla Tappa show but stayed modest, laughing at the idea of himself alongside Merckx rather than lapping up the praise.

At the time the stage offered promise of more to come with GC contenders on the attack, those who’d lost time keen to make amends and the pre-race pick in Primož Roglič isolated. Above all, it was just a great day’s racing: the sun was out, the Giro finally hit the mountains and there was suspense right to the end. 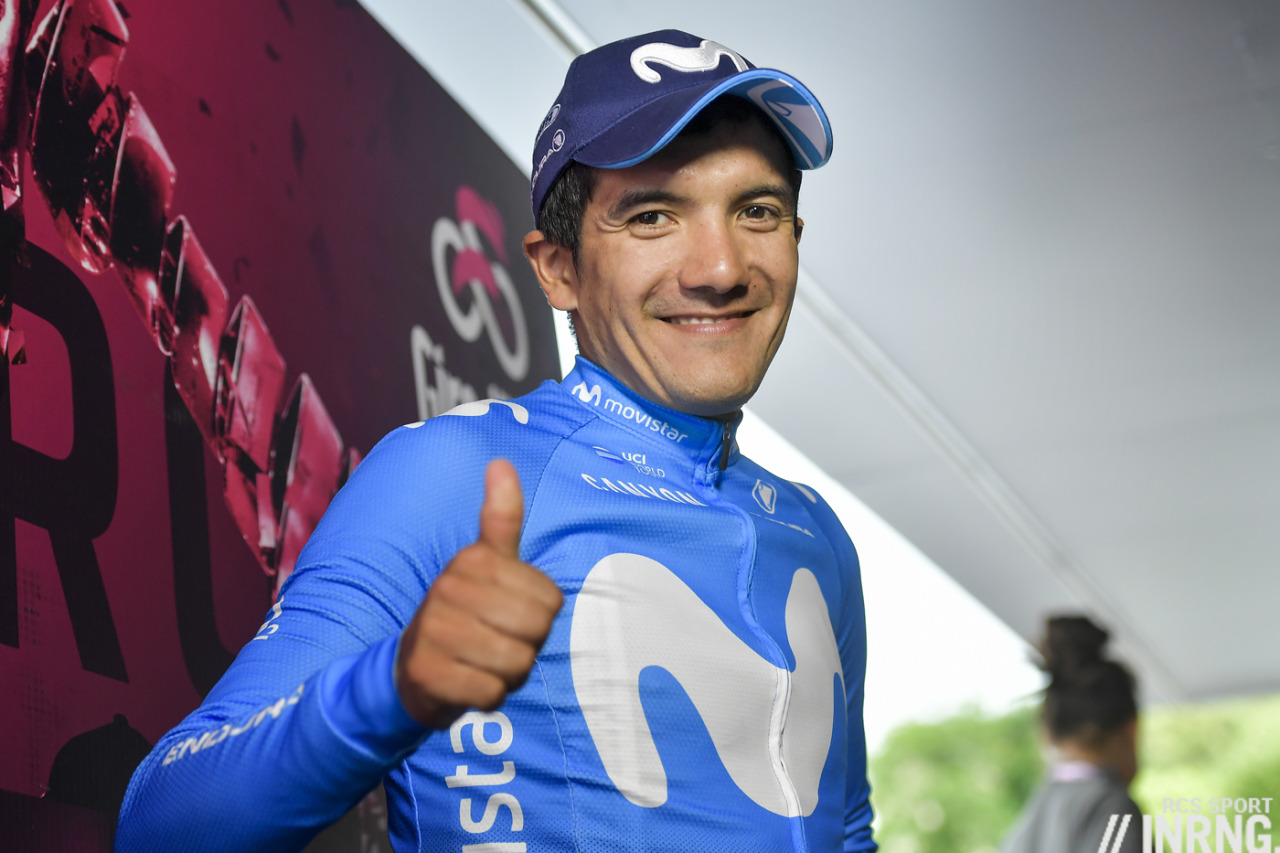 With hindsight
Richard Carapaz was flying. He’d taken a stage already but that was an opportunity seized after a crash and an uphill finish. Review Stage 12 and he closed down moves by Lopez and Nibali with ease and when the group of riders came to the finish he led them across the line. He’d make his winning move two days later on the Colle San Carlo but reviewing this stage adds to the sense that he was unbeatable. Yes his move on the San Carlo did benefit from a moment’s hesitation and marking between Roglič and Nibali, this probably just altered the size of the time gap, not the final result.

As soon as the road pitched up on the climb to Montoso, Roglič was out of team mates and cagily drafted the main group on the road to Pinerolo. Jumbo-Visma had lost Laurens de Plus to illness and the Slovenian was often by himself on the climbs throughout the race. The team also bungled a bike change for Roglič after management stopped for a toilet break, accidents often happen because a series of events rather than one moment and this was a good example: Roglič needed a new bike after gear problems, the team car wasn’t there for him, he took a team mates bike and either in panic or the wrong size, decked the bike on a descent losing him time and picking up an injury which left him sore for the rest of the race. 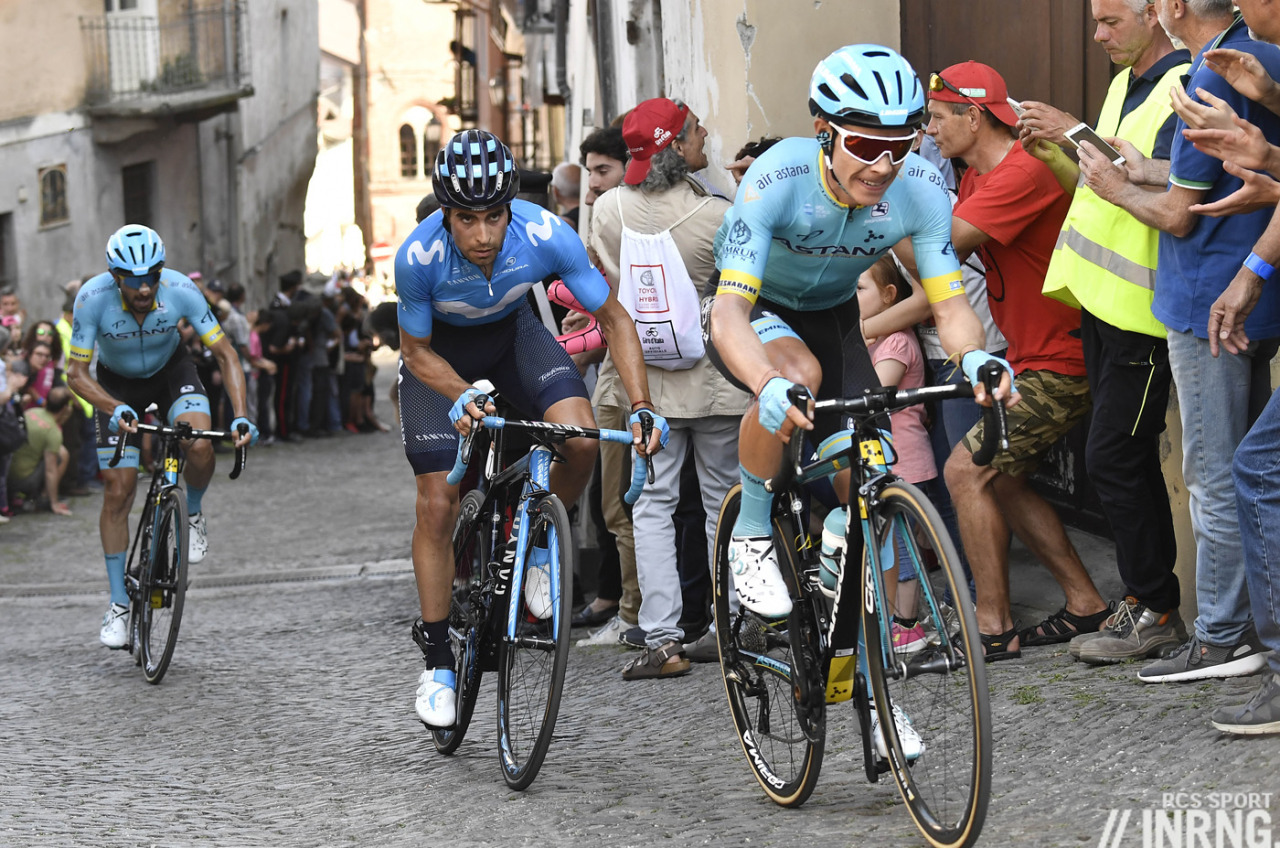 Lopez and Landa’s move was exciting but they’d only take 25 seconds back, only after a huge effort which must have blunted their legs for the following day’s stage, the crucial “summit” finish on the slopes of the Colle del Nivolet. At the time this was still exciting and it looked like Astana would do more of this but their fireworks were more limited. Lopez would go on to have a mechanical the next day and ended his Giro by slapping a spectator.  He’s still 25 but his stock’s falling as riders several years younger offer more promise.

Finally the course design on the day was intriguing. Montoso was climbed for the first time and at only 1248 metres above sea level and with the Alps just over the horizon didn’t look like much but it was plenty to liven up the race and the ride across the plains to the finish was intriguing with the tactics, especially as Astana tried to stir things up while Roglič kept his cool.