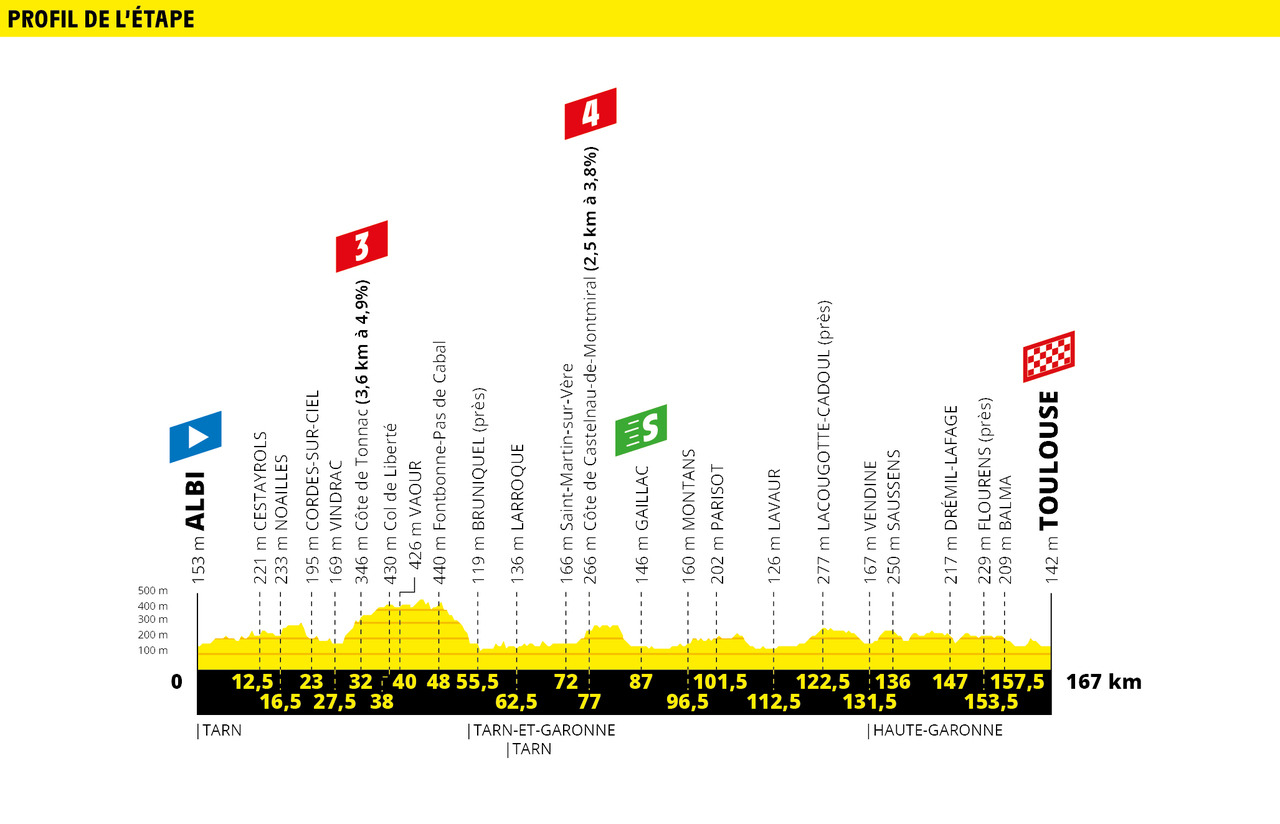 Who will win in Toulouse? The race resumes and the wind could feature again.

The Route: 167km south-west to Toulouse, where on a good day the Pyrenees are visible in the distance and often voted as the city people in France would like to live in. It’s a scenic stage passing Cordes-sur-Ciel, a tourist hotpoint that will be telegenic when filmed from the helicopter and then the first categorised climb of the day to Tonnac, 3.6km at 5% and then the road drags on up to the Col de la Liberté. From here on the road rises and falls gradually, this is gentle countryside with roads typical of south-western France with plenty of roads shaded by trees and past sunflower fields but now and then there’s no cover and it’s exposed to the wind, take section with 50km to go where the race leaves Lavaur, climbs up a long drag and over the top it’s exposed, or the later section from Saussens to Drémil-Lafage or soon after when the road turns north and starts some uphill drags.

The Finish: with just over 6km to go the race rides into the city of Toulouse, crossing town’s rocade ring road and it’s here an unmarked climb begins, 1.4km at 4%. Hardly Alpine and all on a big boulevard but when ridden for recon purposes to write this preview it stung just enough to suggest some sprinters go backwards in the bunch. There’s a descent from 5km to just after 3km to go where it could pay to have a 55T chainring. The road then flattens out and circles the shaded boulevards of Toulouse for a flat finish.

The Contenders: our trio again of Elia Viviani (Deceuninck-Quickstep), Dylan Groenewegen (Jumbo-Visma) and Caleb Ewan (Lotto-Soudal) but there’s still no obvious pecking order. The climb into Toulouse is disruptive and tilts it to Viviani and Ewan but this is tilting, not converting. As ever Peter Sagan (Bora-Hansgrohe) and Alexander Kristoff (UAE Emirates should be close. 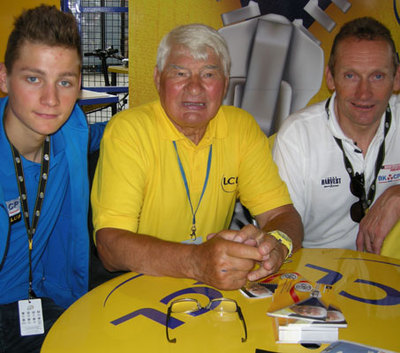 Yellow story: Raymond Poulidor must be the greatest rider not to have won the yellow jersey. He came so close in 1973 when he lost out in the prologue to Joop Zoetemelk by 0.83 seconds. This was his 11th Tour and he’d ride 14 in total with eight podium finishes in Paris but never the top step and not even a day in yellow. His first autobiography set the tone with the title of La Gloire Sans Le Maillot Jaune, or “Glory without the Yellow Jersey” in 1964. To this day to “do a Poulidor” is to come second in France, a term applied to domains beyond cycling like, say, a politician who keeps trying to get elected but fails. Poulidor’s famous for losing he still has a palmarès many would trade a kidney for, with a Vuelta a España win, Dauphiné, Milan-Sanremo and plenty more. Poulidor’s still at the Tour de France and enjoys the celebrity. He knows that coming second all the time gave him a label, a myth and consequently a brand and an income that he wouldn’t have enjoyed had he worn yellow for a day or two. And yes, he’s Mathieu van der Poel’s grandfather.

Weather: warm and sunny, a top temperature of 30°C. The Vent d’Autan is the local wind and looks set to blow at 20km/h from the W-NW which is the bare minimum needed for crosswinds so keep an eye on things in case it picks up.