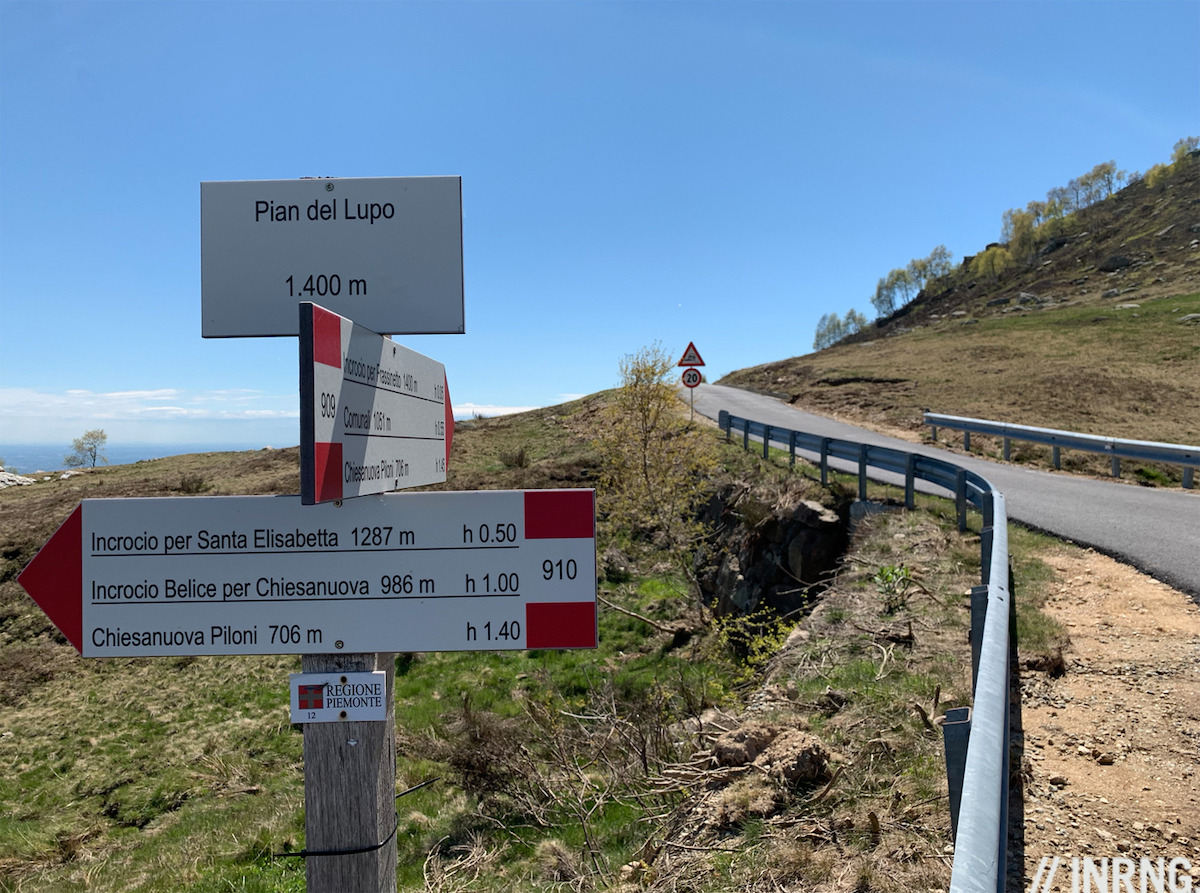 A new climb for the Giro, the road to Pian del Lupo is hard going and offers great views from the top. 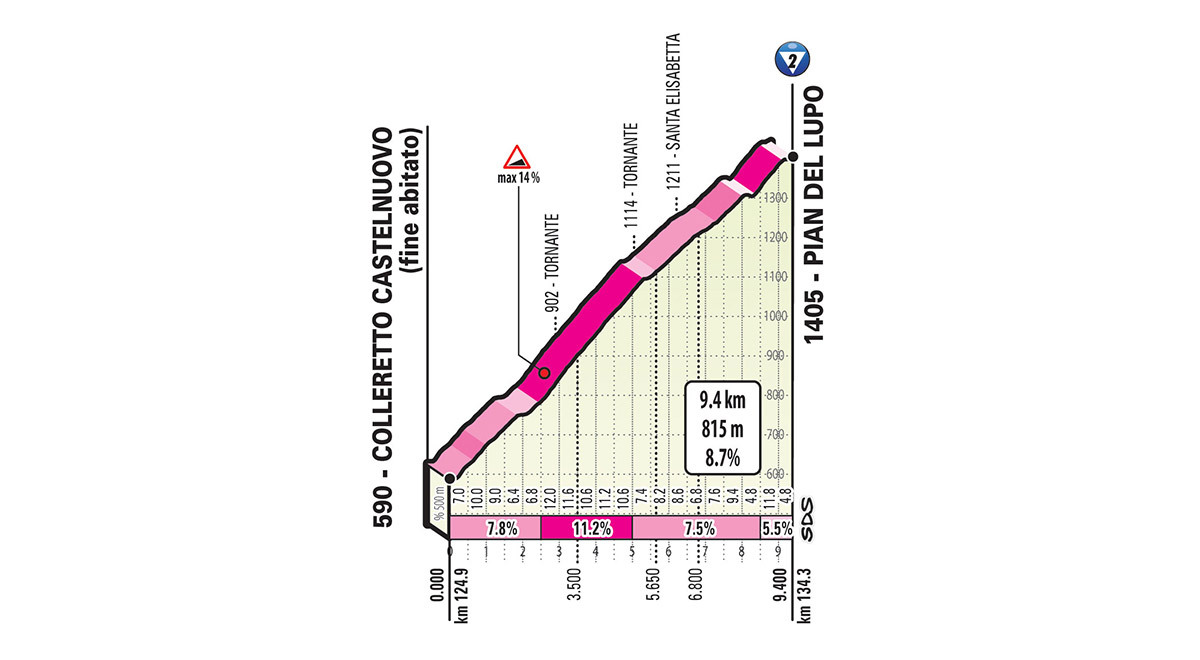 The Route: the Via Quinzeina starts just out Colleretto Castelnuovo, a village north of Cuorgnè in the province of Turin, Italy. The climb is 9.4km and averages 8.4%. 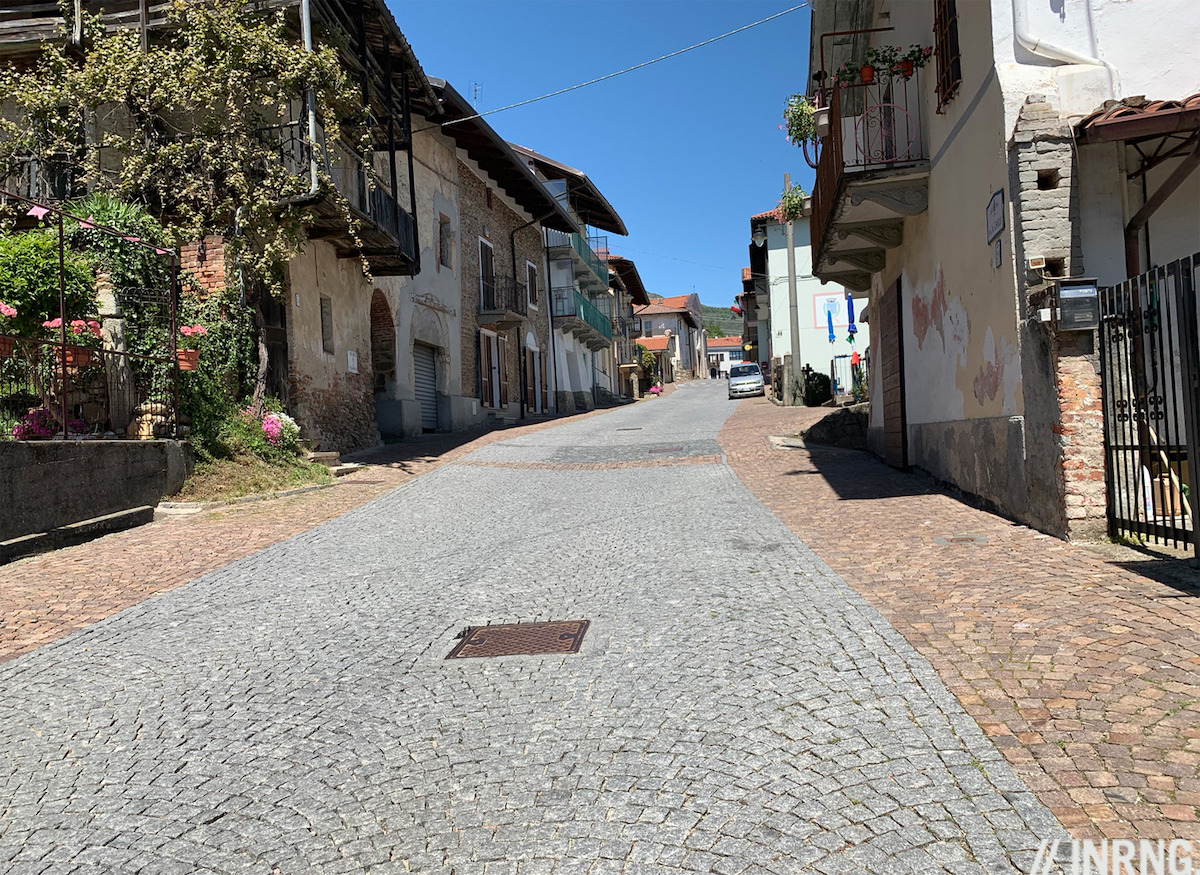 The Feel: ride from Cuorgnè and it’s a climb just to get to the start, the road rises up with good sections of 7-8%, hairpin bends and even a section of cobbles as you go through Colleretto Castelnuovo. You reach the town square with a church on the left and a fountain ahead: use it because there’s nothing ahead. 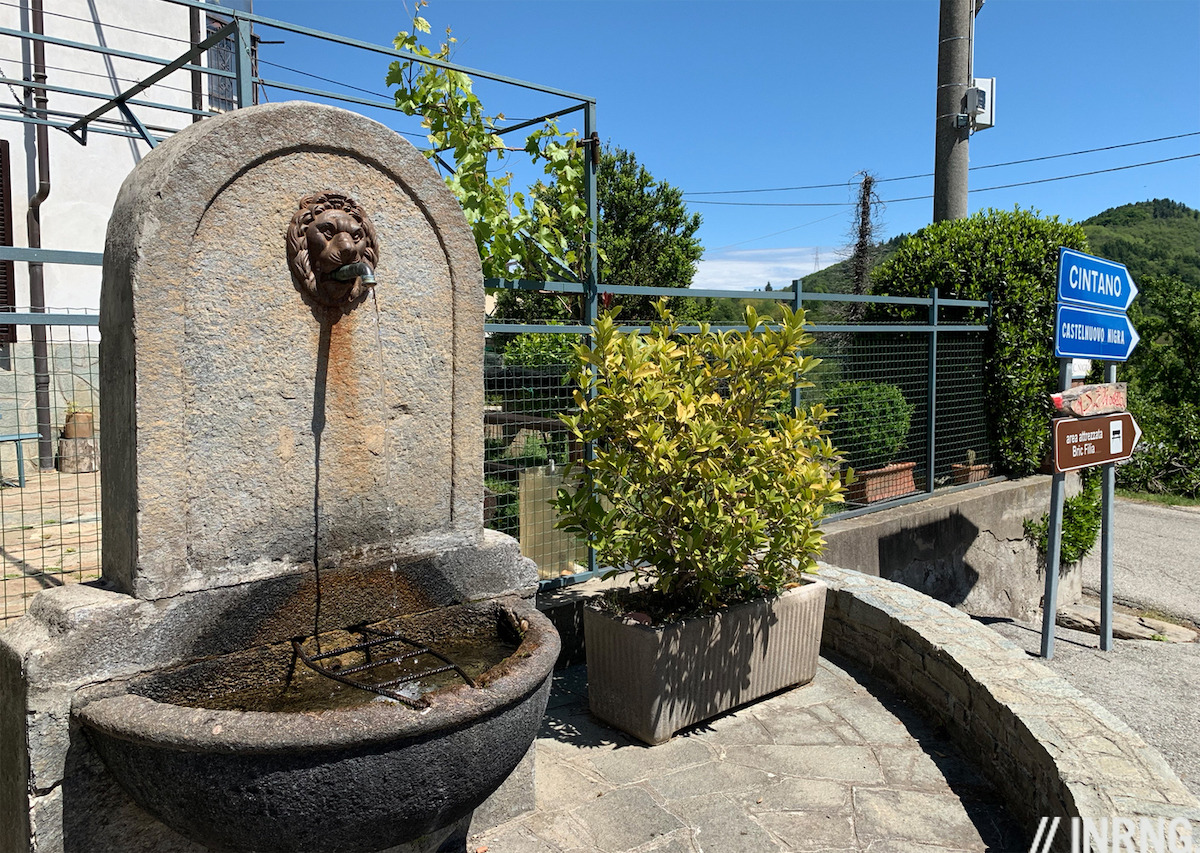 It’s here you fork left and then follow for the signs for the Santuario Santa Elisabetta. There’s a shrine on the right for passing travelers and then the road rears up, then softens, then pitches up. This sets the scene for the rest of the climb, an irregular ascent. If you’re a local then you’ll know how to attack the climb but for the visitor it’s awkward, can you stand on the pedals to take a hairpin faster or is it better to back off and spin around? 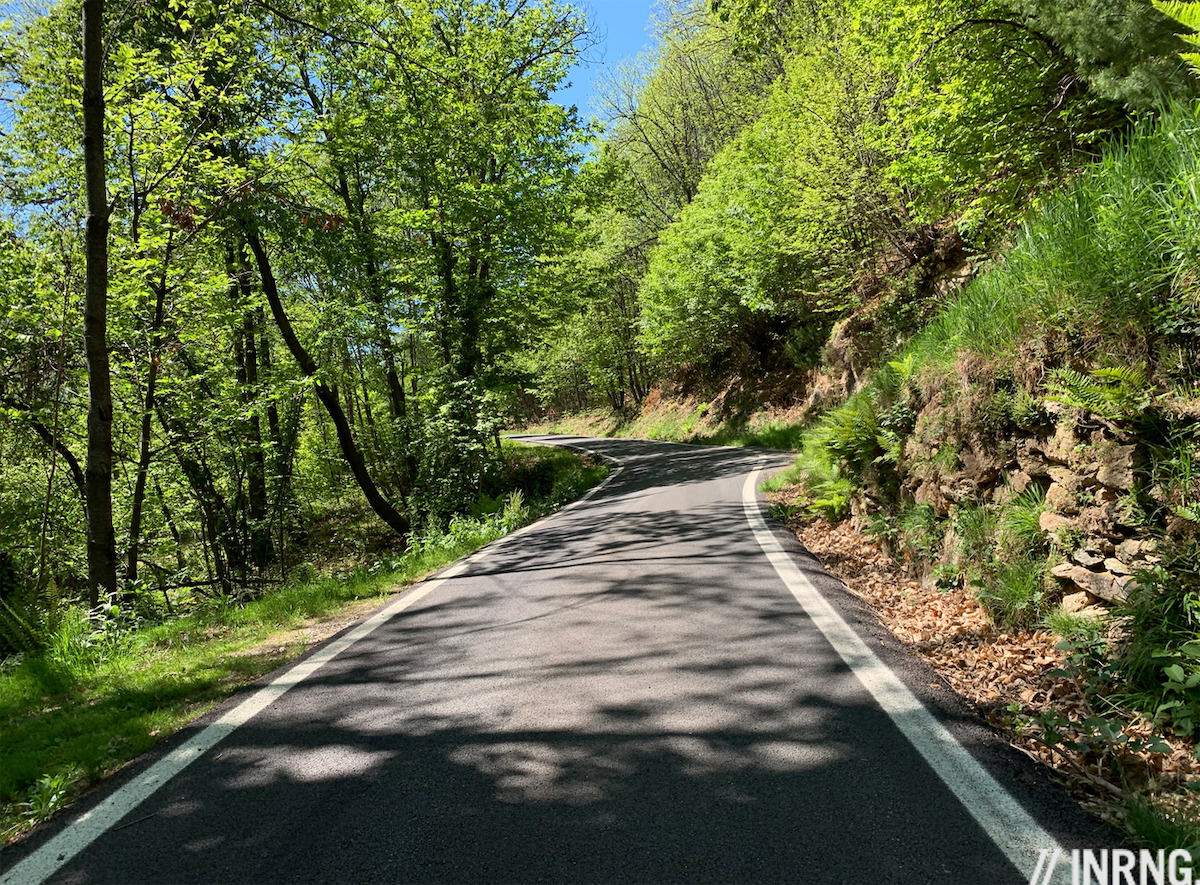 It’s up through the woodland and there’s not much to see, but pleasantly there’s not much to hear either, it’s very quiet with almost no traffic. Thanks to the Giro the road has been resurfaced which helps the 12% sections roll past rather than drag. Higher up and it flattens out, a nice breather, then you round a hairpin bend to leave the woodland and there’s a lone ski lift floating in the wind. Soon after you pass a row of white birch trees to reach the Santuario Santa Elisabetta, the profane and sacred combined in a parking lot with the sanctuary on one side and a restaurant on the other and a few holiday houses huddled around. Keep going and then hook left at the t-junction. You’re now on the pian, the plateau. Huge boulders sit among the grass next to the road and the mountain above looks rocky and arid and below the mountain falls away below you, it’d be a good spot for a school geography field trip but for locals it’s a launch pad for paragliding. Only you’re not the top, the road keeps going and the there’s a 14% ramp to scale before the top as you ride under the shade of trees and then round a corner to reach the top. Electricity cables dangle over the mountain to give you a Michael Blann-style view on the world, nature and human infrastructure. 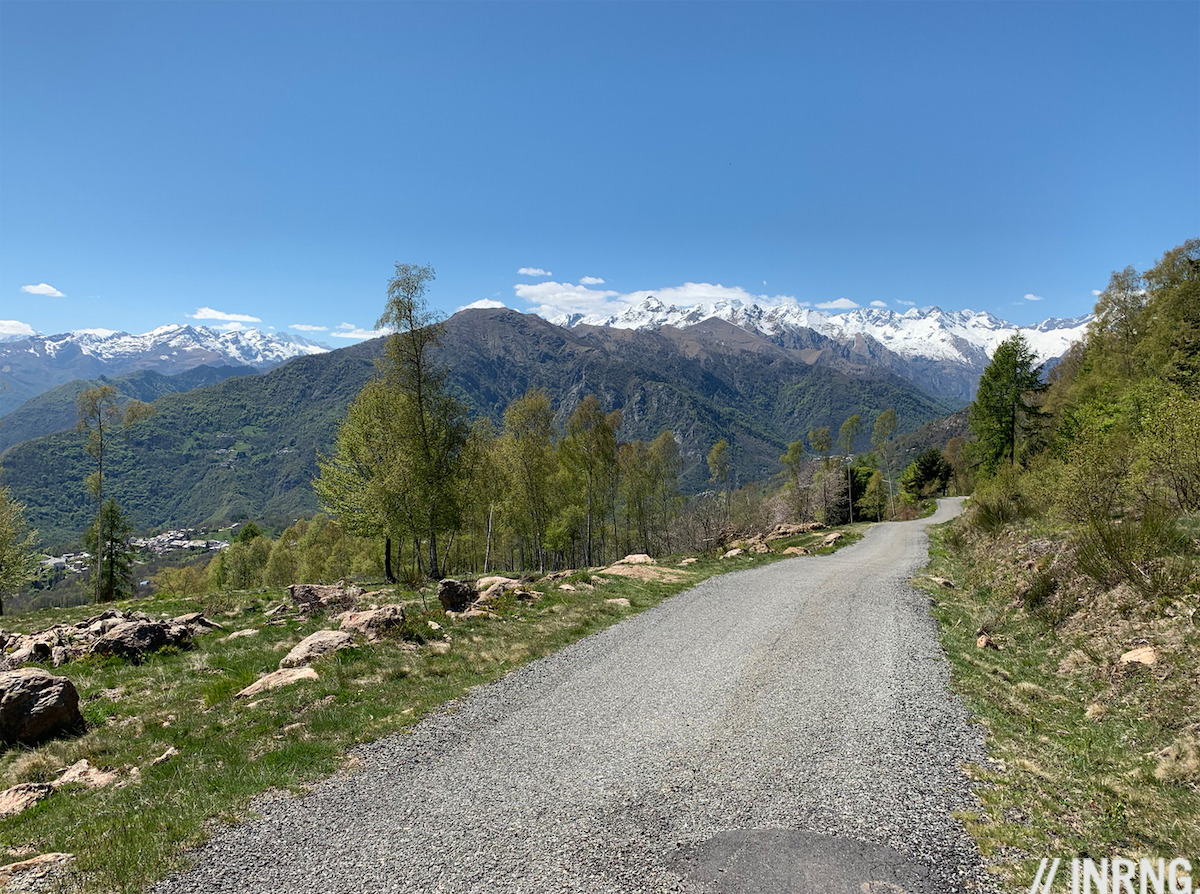 The Verdict: difficult, the average of 8.4% would signal solid work if it was a steady climb. Instead two flat sections mean the road is often 10-12% and sometimes more, it’s a challenge to find a rhythm and something you need to ride several times to get the hang of it. The view at the top satisfies, to have the world down below, or to look up the ridges high above and imagine adventure ahead. Why is it a road to ride? Well “because it’s there” comes to mind – or “because it’s on the Giro route and there’s a preview to write” – and it’s road to explore but there’s nothing unique about it, the Giro might “discover” it but it won’t become a huge draw. If you’re in the area for the Nivolet then you could add this on like the Giro, or use it on another day for a peaceful climb that lets you go up one way and descend another. The Nivolet is a great climb in part because of the way you climb into the mountains and are surrounded by high peaks; Pian del Lupo lets you stare down at the world below and the mountains above.

Ride on: there used to be a gravel road across the top but now it’s been surfaced so you can continue west and pick up the road to Frassinetto. While they’re tarmacked the gravel for a few hundred metres you quickly pick up the old road and it’s a sketchy descent down to the village with gravel, off-camber bends and some very steep pitches.

History: a blank page, it’s never been used in the Giro before. It won’t shape the stage either but acts like a meat tenderiser, it will soften many legs by adding a lot of vertical gain and calories used to the stage.

The Name: it translates as “Wolf plain”, presumably someone saw a wolf on the small plateau and the name stuck. This time there were no wolves in sight even if they still live in the Alps.

Travel and access: Turin, Torino to locals, is the big city with air, road and rail connections although Milan has more international access.