Seen as revenge race to correct any mistakes in the Omloop Het Nieuwsblad, Kuurne-Brussels-Kuurne is perhaps the most sprint-friendly cobbled classic after the Scheldeprijs these days. Who can stop Dylan Gronewegen from a repeat win?

The Route: another race with a deceitful description because the race doesn’t go near Brussels, in fact it stays west of Ninove meaning it never gets closer than 30km from the Belgian capital. It’s no bad thing as it allows the race to twist and turn around the hills of Flanders. The 200km course has a series of 11 tough climbs and cobbled sectors including the Oude Kwaremont but they come relatively early. The last climb is the Nokereberg, it’s wide, stable and 350m at 5.7%: big ring time and still 50km to go. It all makes for a hard course but it is not fiercely selective, the race can regroup on the run in to Kuurne and a bunch sprint is the most likely outcome with sprinters dropped earlier trying to get back to the front group.

The Finish: there are two laps of a finishing circuit with the race rattling back and forth between Kuurne and Kortrijk. It’s flat with a few pinch points to scare the bunch before a long finishing straight that’s lined by deep crowds but exposed to the wind.

The Contenders: Dylan Groenewegen (Jumbo-Visma) is the top pick. He won last year and has already got two wins to his name this season. But no two sprints are the same, there are an exercise in hierarchy but one determined partially by opportunities and risk as well as power, skills and fitness. A proverbial door can close here, a window opens there. Groenewegen has a strong team and key rivals Arnaud Démare (second last year) and Fabio Jakobsen (the new Groenewegen) are both out, sick.

Scanning the startlist and it takes a while to find other sprinters. Matteo Trentin is there for Mitchelton-Scott but in a straight contest with Groenwegen you’d back the Dutchman. The same with the promising Pascal Ackermann (Bora-Hansgrohe), Sonny Collbrelli (Bahrain-Merida) and Jens Debusschere (Katusha). Cofidis bring Nacer Bouhanni who can beat the best on a good day and André Greipel leads Arkea-Samsic. UAE-Emirates’ neo-pro Jasper Philipsen could contend too but crashed yesterday and maybe a bit sore.

Altogether there are enough teams to work to set up a sprint but only just, a lot of rival squads don’t have a sprinter here and they’ll try to split up the race and get into a group that can stay away from the peloton. Deceuninck-Quickstep, Ag2r La Mondiale, Lotto-Soudal, Groupama-FDJ and Trek-Segafredo all have an interest to stir up the race with the latter being brutally honest about their invisible performance yesterday. Their problem is that hard part to split the race is far from the finish and if the race does crack up in the crosswinds then Groenewegen and other sprinters are adept at being in the front group.

Weather: damp and cloudy, there should be some rain showers during the race. A 30km/h wind from the south-west will blow and this is just enough to prising the peloton apart if enough teams conspire.

TV: local channel Sporza starts its Sunday afternooon sports coverage from 1.30pm and the live coverage of the race should begin on Eurosport and other international feeds at 2.30pm. You can sit down to the watch the whole thing but if the race looks like a sprint finish then tune in for the final. They cross the finish for the first time around 4.00pm, again 20 minutes later and the finish is forecast for 4.40pm CET. 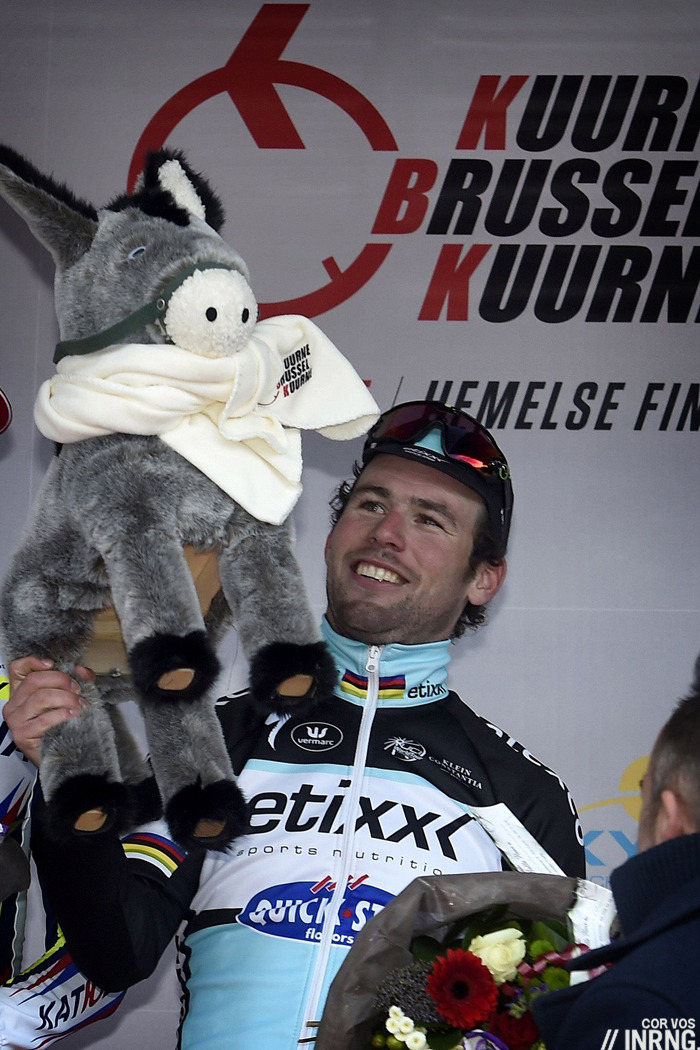 Ambroos: There are some original prizes in the sport and none more so that the donkey awarded to to the winner. They make good pets but fortunately the winner only gets a stuffed toy. But why? Well it’s a self-deprecating label adopted by inhabitants of Kuurne. Belgium’s a fun place that embraces eccentricity, think Magritte or the Maneken Pis. So a town that calls its inhabitants “donkeys” is nothing unusual and a large cartoon-like statue called Ambroos stands with pride in front Kuurne’s town hall. There are two legends, take your pick:

Previous post: The Moment The Omloop Het Nieuwsblad Was Won