A look at who is up and down as well as the chance to review issues like transfers, sponsorship and contracts too. 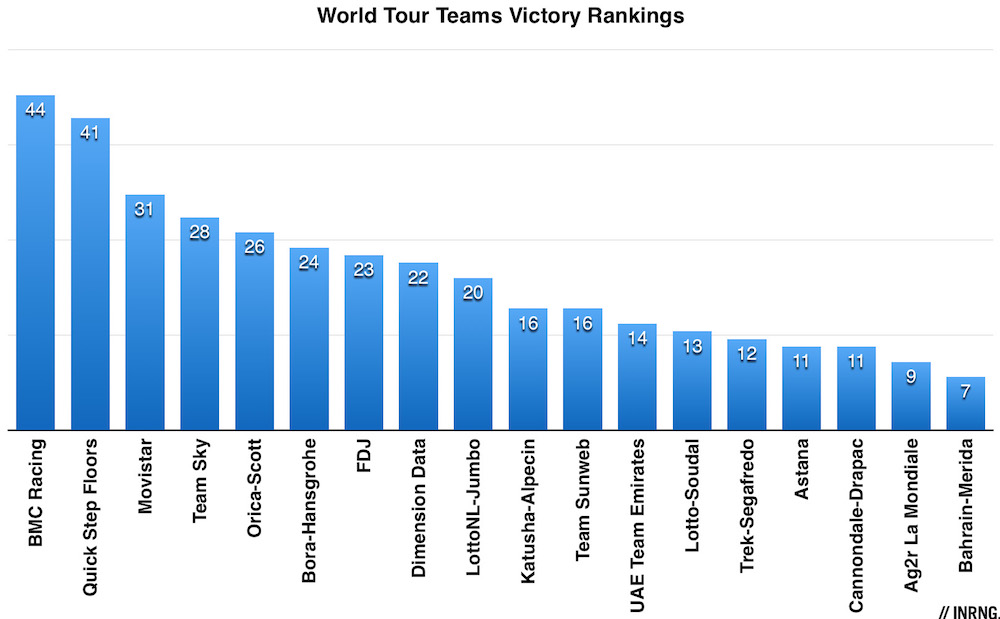 The first surprise is a big one. BMC Racing top the table for a change, ahead of habitual leaders Quick Step although this could merely be a matter of timing, perhaps a week later the Belgian team will get back to the top? With Greg Van Avermaet “only” on seven wins this year it means the success in BMC has been shared out equally with Rohan Dennis on six, the same for Richie Porte and Dylan Teuns on five. It’s Teuns who puts them top having just won the Tour of Poland and the Tour de Wallonie with stages along the way and you might recall his podium in the Flèche Wallonne too, he’s 25 and still developing, will he become a grand tour contender or a specialist in shorter stage races and explosive uphill finishes? Movistar are third. When the year comes to an end and Eusebio Unzué is eating his 12 grapes he could be glad to see the back of 2017, a year when many of his best plans have sunk to a watery grave. So many wins but the Giro saw them come up short and they were invisible in the Tour after Alejandro Valverde crashed out and Nairo Quintana looked as stale as a three day old baguette. The Vuelta next could be a worry, their home race but they’re without a leader and if there’s promising talent to test the wins could be hard to come by. Team Sky’s most prolific victor? Michał Kwiatkowski with four wins. For all the imagery from the Tour de France of them falling in behind one leader, 13 of the team have won so far this year.

Orica-Scott have been active in the transfer market recruiting Mikel Nieve to act as valuable mountain support for the Yates brothers and Esteban Chaves. Three GC contenders is plenty for a team and they’ve got Caleb Ewan too so how they manage this with Ewan’s contract expiring at the end of 2018 remains to be see. That’s their problem and potentially our delight with a triple prong of Yates² plus Chaves going into the Vuelta, and all on a tactically ambitious team.

Team Sunweb sit low down but need not worry, earlier this year they were one of the squads very few wins and now they’ve made up for it with quantity and quality, taking the mountains and points jerseys in the Tour and the overall in the Giro.

Katusha have announced two curious signings in Nathan Haas from Dimension Data and Ian Boswell. Will this change their win rate? Perhaps especially as Haas can win a big race, he was in the mix in the Amstel Gold earlier this year. But the interest is also in their nationality and ability to communicate. Many English-speaking fans probably find Katusha leave them cold, the likes of Ilnur Zakarin and Simon Špilak are not big personalities even in their home languages so two anglophones should help the team reach a wider audience.

Trek-Segafredo took a win today with Edward Theuns, a much needed triumph and only their tired win in the world Tour this year after Bauke Mollema’s Tour de France stage and Fabio Felline’s prologue win in Romandie. Suddenly everything has changed with Alberto Contador’s retirement announcement, it seemed to appear on his Instagram hours before the team got around to announcing (did they know?). Either way it means a substantial seven figure sum of budget is freed up for next year and they’ll be evaluating an offer for Mikel Landa or Fabio Aru.

Astana prove that budget doesn’t always bring wins and they need a big signing for 2018, whether that includes Fabio Aru remains to be seen. Part of the Vuelta’s attraction is it’s late spot on the calendar, the last chance to salvage a prestigious win and Astana fall into the category of needing something to cheer.

Bahrain-Merida languish in last place. They’re a new team and it takes time to get going but all the same they’ve got a substantial budget and ought to be getting more results. They were almost invisible in the Tour de France and if they lost their leader Ion Izaguirre on the opening day the rest of the squad didn’t look they’d have been much help for him. The Vuelta is a big test with Vincenzo Nibali aiming for the overall win. 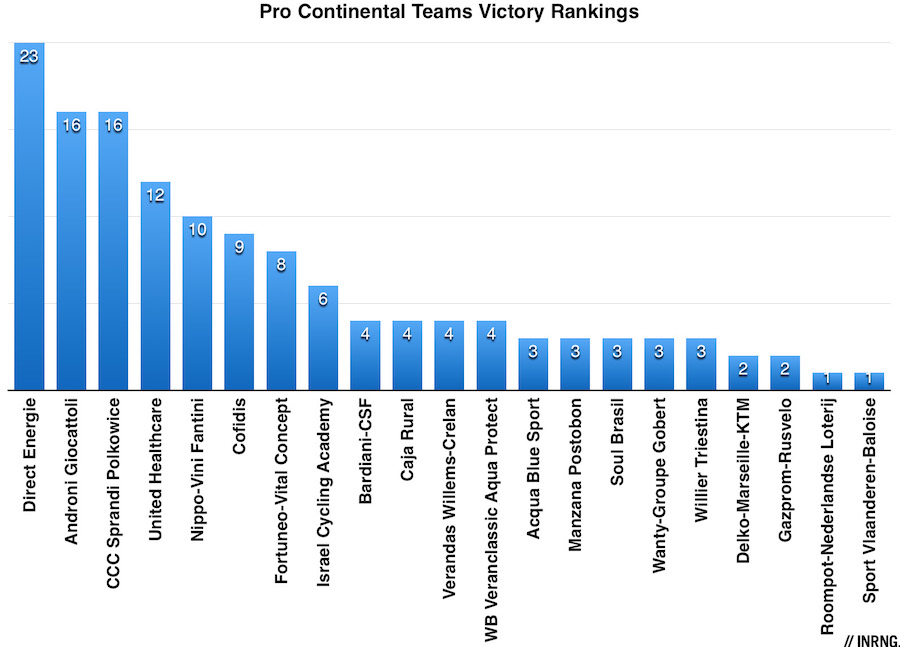 The Pro Continental ranks contain 22 teams and they’ve all had one win so far. Direct Energie top the table and this despite the troubles with their house sprinter Bryan Coquard who was dropped by the team since announcing he was signing elsewhere. A fit of pique from team manager Jean-René Bernaudeau? Certainly but it’s worked out well given Coquard’s form and Lilian Calmejane’s box office win in the Tour de France. Several teams need to copy Fortuneo-Oscaro’s signature of Warren Barguil. The Breton team are now incontournable as the French say, unavoidable, for a wildcard invite to the Tour de France. The same policy could work wonders for the likes of Androni, Wanty-Gobert or CCC-Sprandi in order to secure a Giro start although it’s sometimes whispered that sponsoring the race direct helps better.