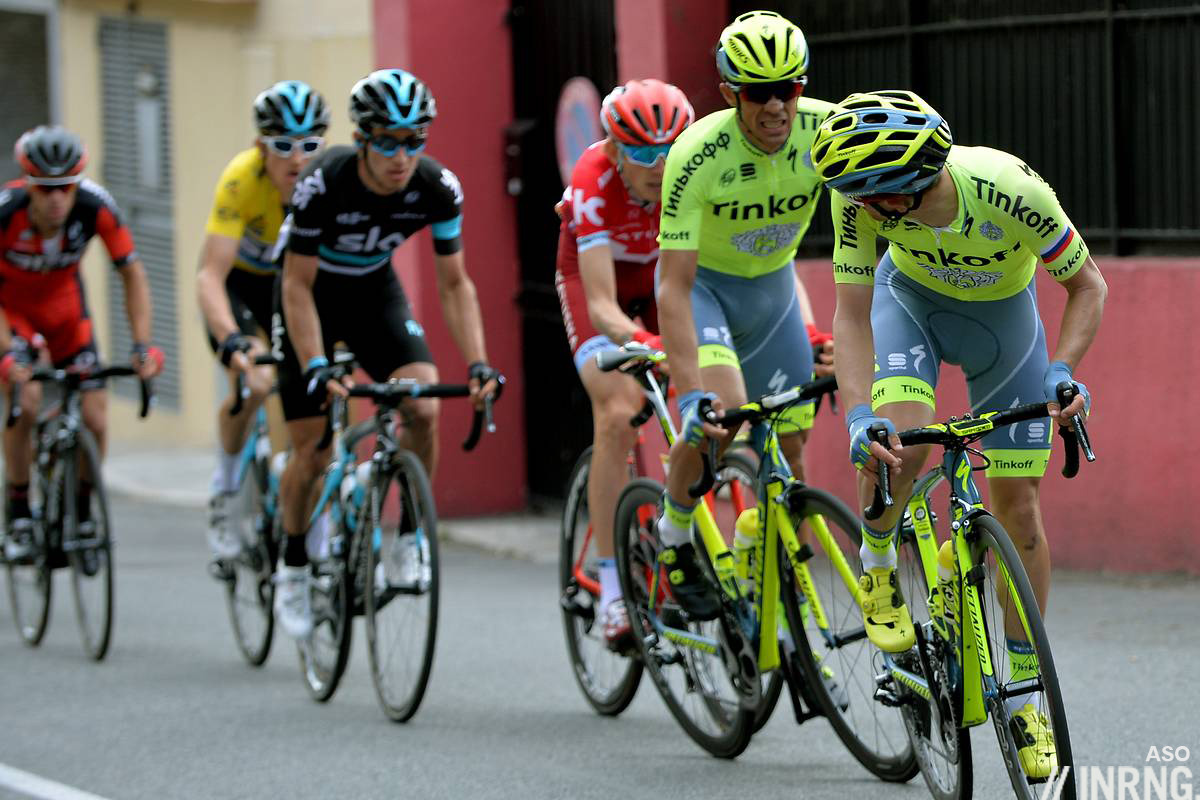 There’s a lot to be said for one week stage races. The good ones are concentrated versions of a grand tour with a varied mix of terrain and stage types. The brevity of the contest means every mountain stage counts and there’s rarely time to recover from mistakes. This year’s Paris-Nice was a textbook example and the final stage saved the best for last. Stage 7 is the pick but we need to review what had happened events on the way to Nice. The race began with a time trial victory for Michael Matthews ahead of Tom Dumoulin and Paddy Bevin, a result which put the Australian in the yellow jersey from for most of the week with a a second stage win after he survived a tangle with Nacer Bouhanni. We had the novelty of two gravel sectors on Stage 1, a way to turn a transitional sprint stage into a mini spring classic. The gravel – the fear of the gravel? – and a light breeze was enough to get Team Sky on the front with 45km to go to rip things up as Katusha missed the move and we got an hour of action that culminated in Arnaud Démare’s long sprint. 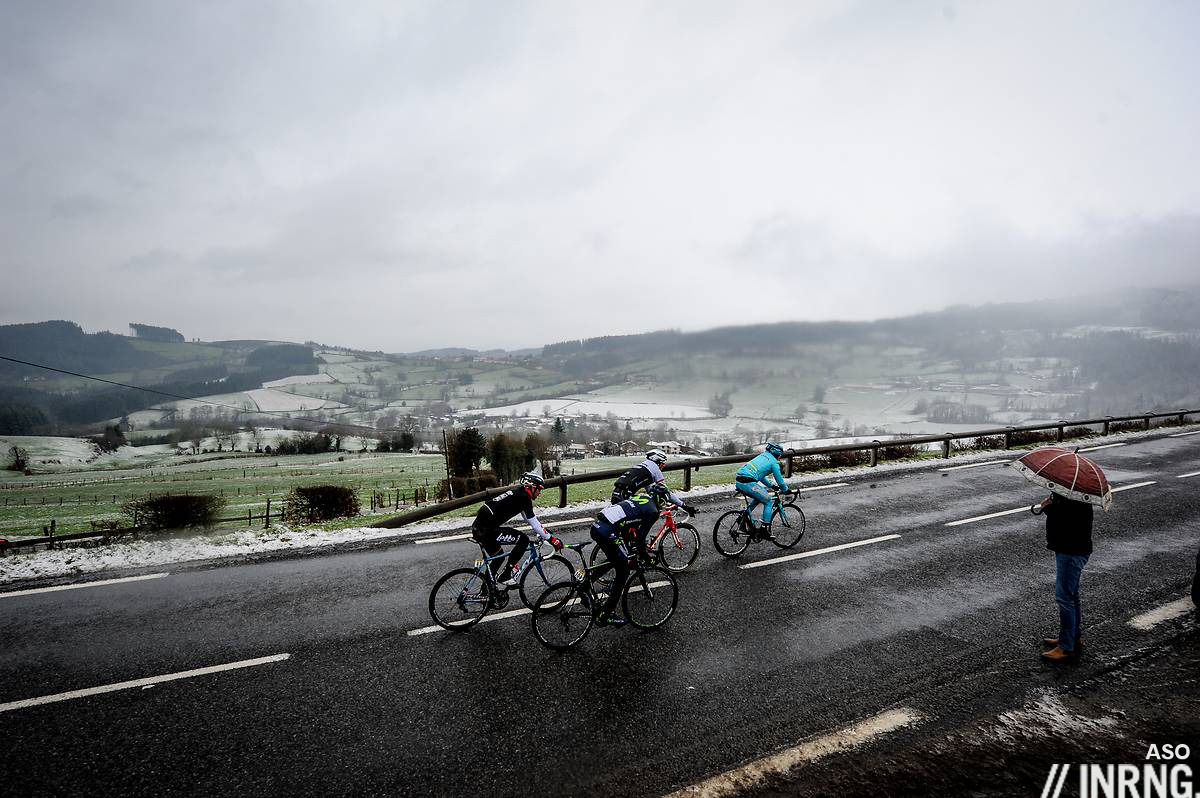 The weather was dire. You can cope with the rain or the cold but their combination is grim and there’s no race-style clothing around to stop icy rain chilling riders to the bone. The stages could be shortened to abbreviate the agony but many ride this race to rack up long distances in the legs ahead of the classics. The weather was so bad that the mini-summit finish on the steep Mont Brouilly was abandoned as the snow fell across the Beaujolais hills activating the new Extreme Weather Protocol. This would impact the race as it kept the overall classification in a tight group. Ilnur Zakarin won the first mountain stage at the Madonne d’Utelle after sitting in the wheels and sitting out the attacks, a triumph of linear pacing. Richie Porte and Alberto Contador traded attacks, the Spaniard had gearing problems and couldn’t get the big chainring. Geraint Thomas was there with help from team mate Sergio Henao and the Welshman finished second on the stage, took the six second time bonus and was in the yellow jersey with a 15 second lead over Contador and one stage to go. Stage 7 was 134km into the hills behind Nice. Contador only needed to take back 15 seconds so what did he do? He set his team to work early, got riders in the early breakaway and then launched his solo bid with almost 50km to go. Bridging across to his team mates on the Col de Saint Pancrace Sky had to chase for the next 25km and pulled Contador back just as they reached the foot of the final climb, the Col d’Eze. Here Contador launched more attacks and finally cracked Thomas. He crossed over the col with Richie Porte and a 30 second advantage on the yellow jersey. The pair picked up breakaway survivor Tim Wellens to begin a 15km downhill run to the finish. Contador was virtual yellow jersey and chasing the stage and time bonus. Who was going to win?

Wellens took the stage win he deserved, Contador grabbed bonus seconds but the overall result wasn’t known until Thomas crossed the line and as we added time bonuses and looked to the clock he’d kept his yellow jersey by four seconds. Contador may have finished where he’d started the day in second place but he’d enlivened the race and ennobled the value of Thomas’s win. 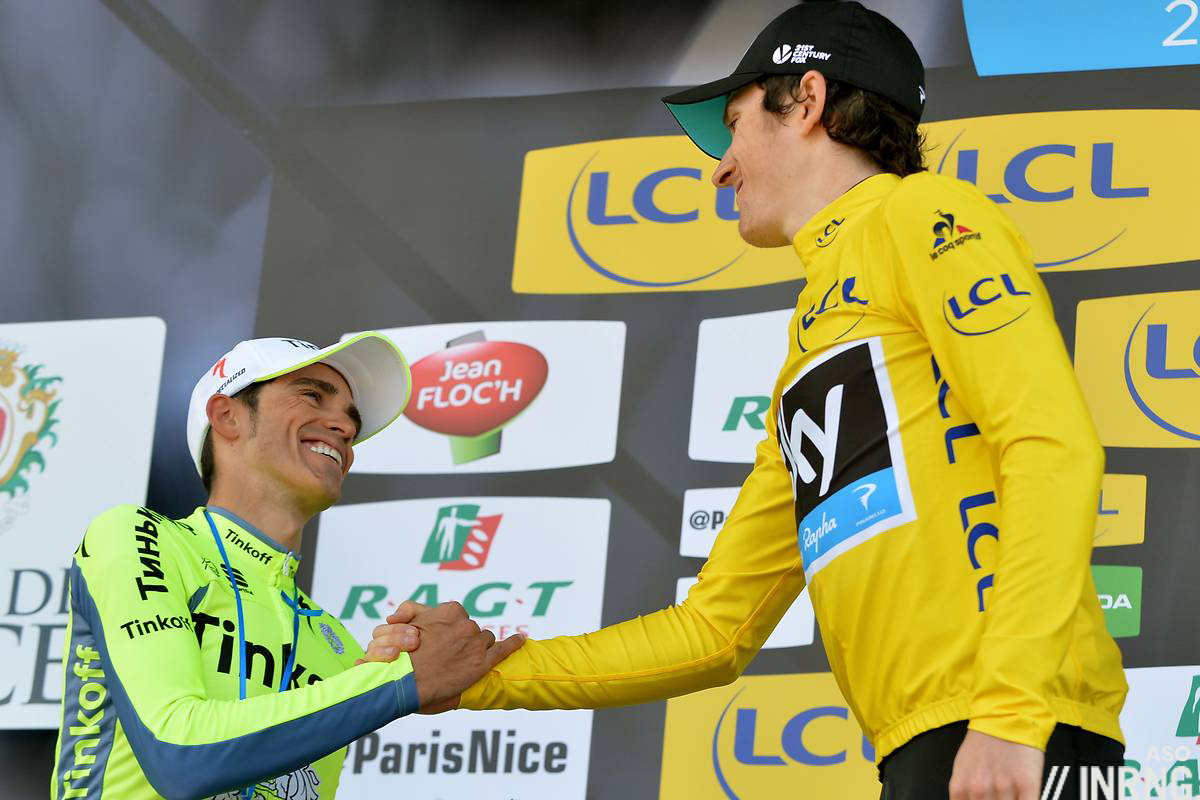 20/20 Hindsight: another Team Sky stage race win? Yes but this was not the tactical steamroller. Thomas had to ride to his limits and Contador and Tinkoff put Sky on the ropes. It was exciting but as remarked at the time Contador still lost Paris-Nice to one of Froome’s domestiques, it wasn’t the psychological advantage he needed. The Spaniard had a great spring with second place in the Volta a Catalunya and victory in the Tour of the Basque Country. So far so good but he’d crash and get ill in the Tour de France and if his chances of an eventual win seemed unlikely in hindsight perhaps he’d have spiced up what proved to be a dull dish in the crucial moments; certainly a podium finish might have been within reach. Come the Vuelta and Contador as a catalyst to the action, notably on the stage to Aramón Formigal but he didn’t get a stage win and finished fourth overall.

Much was made of Thomas’s transition away from the classics to stage racing but 2015 had already seem him thrive in stage races. Paris-Nice suited Thomas perfectly, not too mountainous and he assumed the role of helper for Chris Froome later on. He’s a versatile rider who can fill the lieutenant role but leadership at Team Sky for 2017 is already being claimed with Mikel Landa aiming for the Giro and Froome likely to aim for the Tour-Vuelta double leaving Thomas to continue the understudy role and picking smaller objectives.

Looking at this early season race we saw Ilnur Zakarin win a stage and he’d go on to match Nairo Quintana in the mountains of the Tour de Romandie and was close to the podium finish in the Giro before a horror crash took him out on the final Friday but he recovered and took a stage win in the Tour de France. Ion Izagirre had a good race but in the style of what we could call a “Moto 2 rider”, often in the second group on a mountain stage rather than making the moves and this steady riding earned him plenty of points, enough to make Bahrain-Merida buy out his contract from Movistar and presumably pay him handsomely. At the other end Andrew Talansky’s troubles were there and the hype about Pierre Rolland’s improvement now he’d swapped Europcar for Cannondale had a cold shower in the prologue. There was also the absence of Fabio Aru who was down to ride this as part of his path to the Tour de France but pulled out and his season never came together.

Finally a sad note because the stage ended on the Promenade des Anglais, always a convivial host to the race and an urban, opulent setting to what is often a rural sport but this location is now indelibly associated with the atrocity on 14 July when a murderous coward drove a truck into a holiday parade and opened fire to kill 86 people.

Why the highlight? plenty of action and tactics where the result went down to the final seconds. Contador’s bold tactics show how to take on Team Sky and if he lost here then similar tactics would undo Team Sky in the Vuelta.