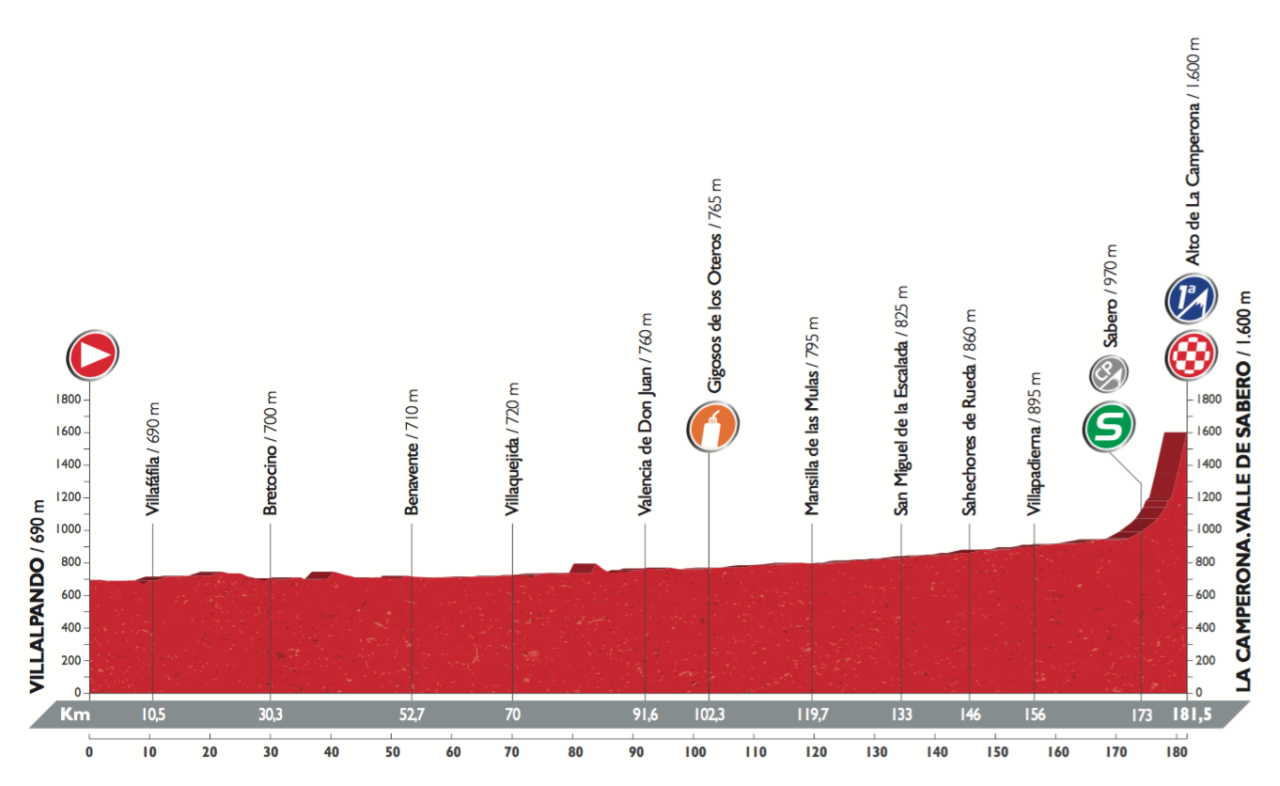 The first mountain stage of the Vuelta, 173km and then the vicious climb of La Camperona with its 20% slopes. 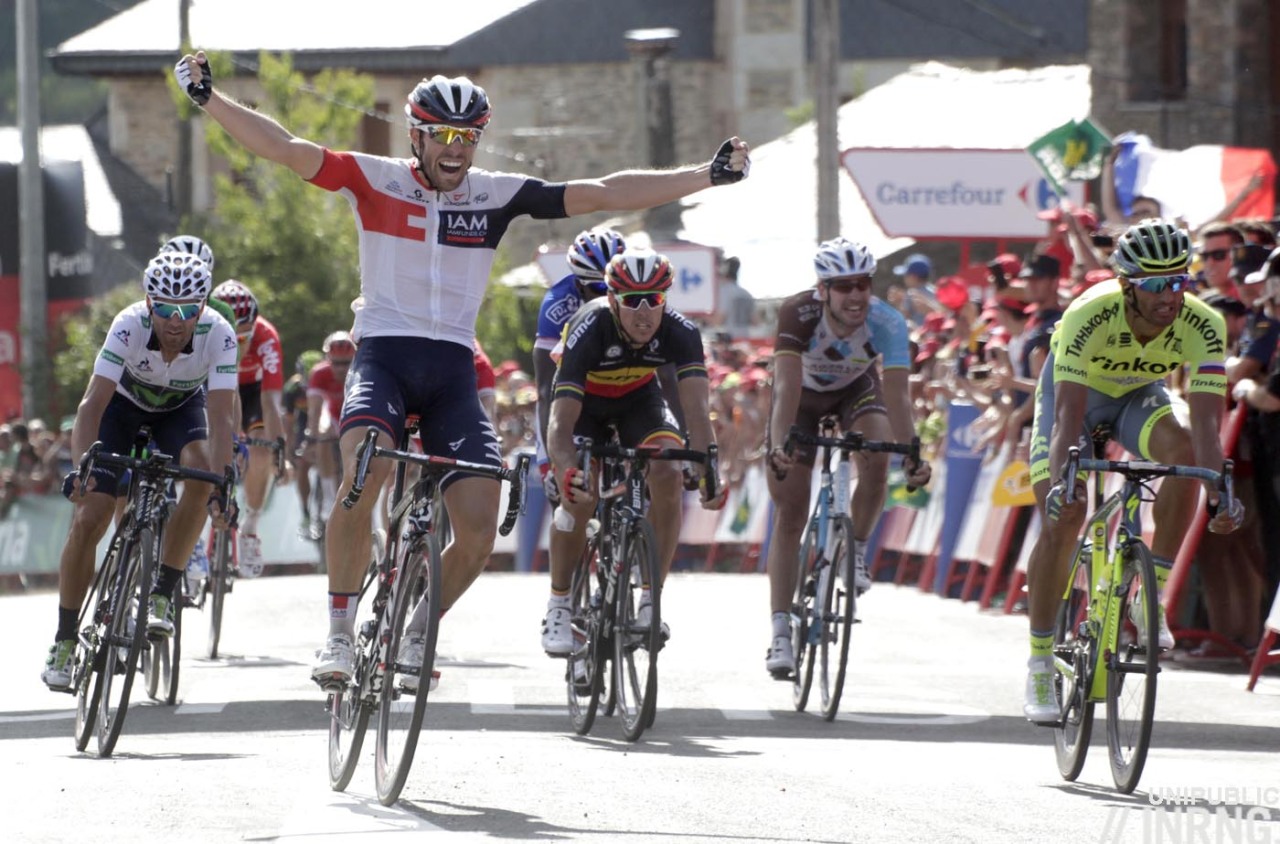 Stage 7 Wrap: a sprint win for Jonas Van Genechten of IAM Cycling, the Swiss team completes a hat trick of stage wins across all three grand tours. It adds to the hypothesis that hungry riders win more often but IAM’s always kept their riders on one year deals and if impending unemployment was a big concern then half of Tinkoff would be more active in the race. Van Genechten’s a sprinter who found himself among non-sprinters after Alberto Contador crashed on corner, slowing the rest of the field. 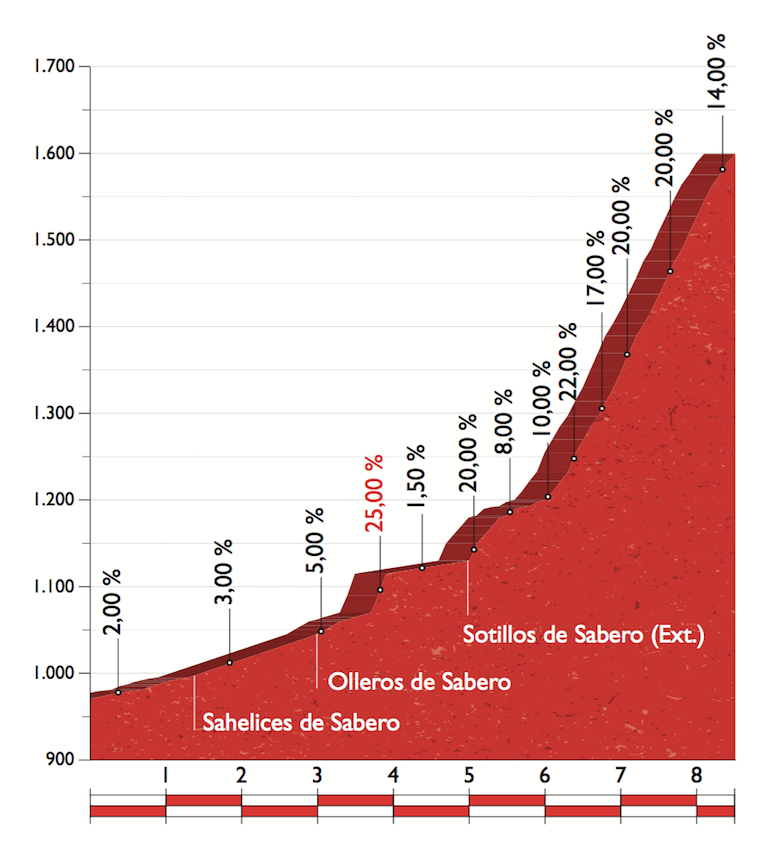 The Route: it’s all about the finish, a 173km ride to the intermediate sprint and then they hit the climb of La Camperona, 8.5km long at an average of 7.4% and used in 2014. Ryder Hesjedal and Oliver Zaugg made it to the finish with the Canadian taking a rare win ahead of even more infrequent winner Zaugg while behind Chris Froome got the better of his erstwhile GC rivals.

Only as the profile shows it’s got mucho double-digit gradients, not just in the numerical sense but a few riders will be waving two fingers at the race organisers for sending them up such a savage climb. The profile looks bad enough and listing the gradients to two decimal places looks extra-accurate but crucially the steep numbers are not just a brief moment through a hairpin but but sustained sections, there’s 2.5km at 15% for example and it’s steep all the way to the line for the final 5km and on a small road. The Contenders: Chris Froome was the best of the GC contenders here in 2014 when he had just enough energy to spin the legs one last time and surge past his rivals. His measured style of racing should suit him well again today.

Esteban Chaves rode this in 2014 but didn’t get a result. Now he’s looking irresistible on the climbs but it’ll be interesting to see how he fares on a long effort like this.

Alejandro Valverde is climbing well and has the ability to snipe the win if he comes in with a handful of riders. Nairo Quintana might not like the changes of pace this climb imposes but it’s all relative, if he’s a notch lower to win the stage he could well hang with best. Movistar have Ruben Fernandez and Dani Moreno too.

What can Alberto Contador do? He’s 11th overall at 1m52s and suffering setbacks all the time, notably yesterday’s crash. But all the more reason for him to attack. He looks to be lacking a bit of rhythm in his legs so could still come good in the coming days.

Darwin Atapuma leads the race but only has 24s on Alejandro Valverde, slender when you consider the 10s time bonus awaiting the stage winner. A win today seems unlikely for BMC whether Atapuma or Samuel Sanchez but both can make the top-10 here.

Can a breakaway stick? Normally not because any move would need to get a big lead on the plains and then hold this uphill only any climbers who go clear will struggle to take a lot of time, this is not ambush country.

Weather: mainly sunny and a top temperature of 29°C.

Previous post: The Rise of China and The Fall of Italy