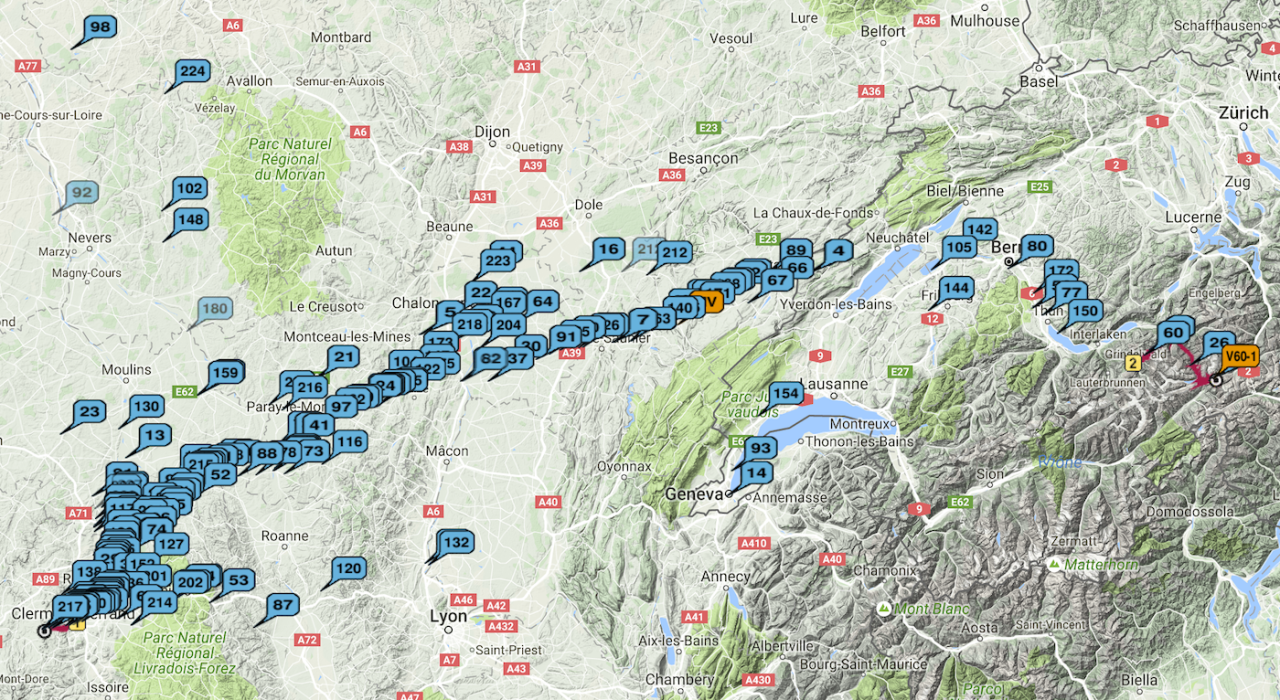 Are you sitting comfortably? If so this could be a problem. Perhaps you’re reading this at home or at work, maybe on a train or while waiting in an airport? Chances are you’d prefer to be out on your bike and better still imagine if you had nothing else to do today but pedal hard across France and Switzerland during the height of summer.

That’s what hundreds of riders are doing in The Transcontinental race at the moment. This isn’t a pro race on the UCI calendar, in fact it’s almost the opposite and this is what makes it fascinating.

The Transcontinental is simple: a start in Geraardsbergen in Belgium by the Kapelmuur and then ride to Çanakkale in Turkey via four checkpoints, Clermont-Ferrand, the Furkapass and the Passo di Giau, and Durmitor in Montenegro. And that’s it, the route is up to participants and those who make it to the finish are expected to cover about 3,800km but judging by the livetracking of the routes some have already adopted a scenic route. One participant even started heading north out of Geraardsbergen before grasping they were probably going the wrong way.

There are few rules, in fact they’re so simple they can be listed here in one go:

1. Riders must ride from the start point to the finish point and visit all mandatory controls en-route.
2. 3rd party support is prohibited. All food, drink and equipment must be carried by the rider or acquired en-route.
3. Drafting is prohibited.
4. All forward land travel must be human powered.
5. Ferries are permitted for expedient coast to coast travel, by approval of the Race Director.
6. Riders are responsible for maintaining positional updates and evidence thereof.
7. 2+ days of inactivity without contact will be deemed a scratch.
8. No Helmet, No Insurance, No Ride.
9. It is the rider’s responsibility to know and observe local laws.
10. Riders must act in the spirit of self sufficiency and equal opportunity for all racers.

That’s it, no chapters of PDFs with sub-clauses although as we’ll return to in a moment these rules may not stay so simple for ever.

What’s alluring is the freedom, not just the simplicity of the rules above but the choice of route, the decision of when to sleep and so on. It’s a race but there’s no broom wagon, only generous time limits to reach each checkpoint so there’s plenty of time for those wanting to make a tour of it. Those at the front are putting in impressive sporting performance.

The chart above shows current leader Kristoff Allegaert’s time and speed via the tracking website at pixel time. As you can see he’s putting in shifts over 20 hours and regularly moving at 30km/h on hilly roads on a bike loaded with spares and camping equipment. All competitors carry a GPS tracker so that their progress can be followed and to help ensure nobody takes the train or hitches a ride in a car.

Apart from the tracker and those 10 rules there’s an “anything goes” attitude to other elements. There’s no marked route nor feed stations. Some unfold a sleeping bag and sleep outdoors, others check into hotels; some manage without a change of kit, others pack fresh clothes. The same for eating, riders are posting pictures bags of sweets, cans of Coke, burgers and pizzas ` plenty. Cheap calories but people seem to take what they can find and often it’s because service stations and McDonalds are both roadside and open, something not that’s not always the case across a lot of Europe. Take today where many bakeries are closed in France as it’s a Monday and in Switzerland it’s the national holiday meaning many closures too. It’s a far cry from the pro races where a thirsty rider only needs to lift their arm in the air to summon a team car and get bottles handed up from an icebox.

It seems reminiscent of the inaugural Tour de France in 1903 with its 400km stages and pioneer format, an adventure and a test as much as race. It’s also a celebration of distance. The earliest bike races were often created to show just what could be achieved on a bicycle, to promote the strength and reliability of particular brands. The Transcontinental sees some participants riding 400km in a day (actually day and night) with usually no more than three or four hours of sleep and repeating for days on end. Extreme? You bet. But if you’re thinking “how do they manage that?” then it’s like the general public today who look at the Tour de France, Milan-Sanremo or this week’s Tour of Utah and wonder the same about 200km stages over mountains in the summer heat, just as unthinkable to most. The men’s road race remains the longest event in the upcoming Olympics and by some way. This is still one of pro cycling’s unique selling points, that no sport is as hard and something worth reflecting on as TV demands ever shorter, more intense stages.

The longer the worse it is for TV? Perhaps and the Transcontinental wouldn’t make great live TV. Most media coverage of is via a race blog, photos via the usual social media channels from participants and a tracking website where you can follow the blue dots across Europe. TV would never work for this race given it’s just lone riders pedalling across the countryside. Video has its part but after editing, there’s a good documentary on last year’s race:

Just as a regular pro cycling race is so much more than a physiological test thanks to tactics, a long distance event like this and other “ultra” riders are as much about logistics and coping strategies: what to eat, where and how to sleep and so on. Do you take that big flat road or the shortcut over a mountain pass? Can you hold the same position on the bike for half a day?

You wonder for the future of The Transcontinental. Those simple rules? The more the event grows, the more money it’ll attract and the more structured it’ll become. Look at triathlon where the Ironman grew out of a challenge among friends into a multinational corporation today. For now it’s strictly amateur and all the more refreshing for it.

Conclusion
A departure from the usual pro cycling topic but this is an interesting event – just one of several similar races – and also because of the way it seems to evoke the pioneering spirit of adventure which was essential to events like the Tour de France. If you wondered what it was like to follow those races a century ago then tracking the Transcontinental today might be a contemporary equivalent. In the space of a century pro cycling has transformed itself into a major sport but it’s also become highly coded and formatted as today’s carefully planned team transfers attest with their careful timing and attributed quotes.

The Transcontinental’s endurance and logistics make this a hard effort but to each their own pace. Still sitting comfortably or would you prefer to be on your way to the next checkpoint?