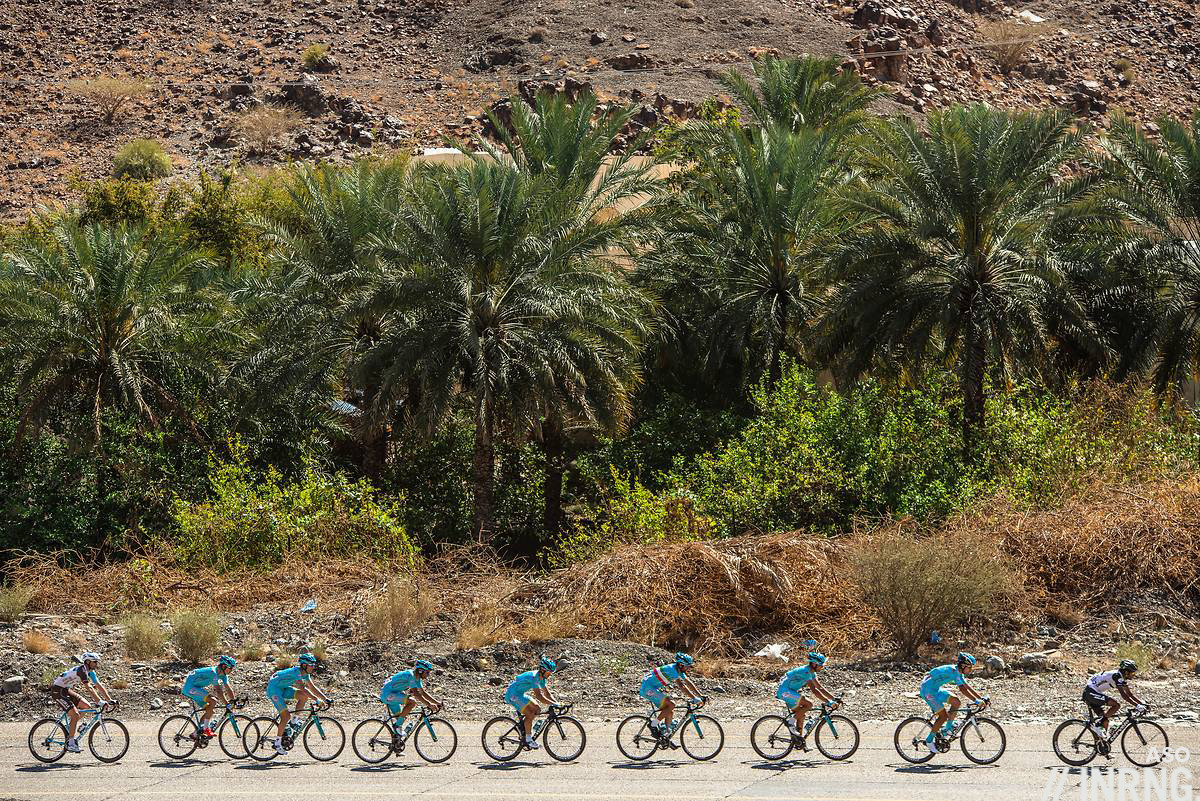 The UCI has announced the World Tour Calendar for 2017 with 10 new events promoted and a total of 30 days of racing added. The new events help plug holes in the calendar but risk diluting the prestige of the prime calendar and while the new races join the calendar a mooted rule change means the newly promoted events could still have a secondary status.

What have these races all got in common? It’s hard to know, there’s no set matrix of criteria for a race to meet before joining the World Tour and all vary according to type, prestige, ambition, funding, quality, TV reach and more. Instead of looking them as a whole, each has their own role or merit:

Inevitably a few will shout “it’s all about the money” but as loyal readers will know from the breakdown of the UCI finances the registration fees for 2015 amounted to CHF 931,000 (about the same in US Dollars), a gross income item against which commissaires, staff and other expenses are netted off… and the result was a loss last year. Perhaps it’ll swing to a profit but the point is World Tour race fees are no bonanza. 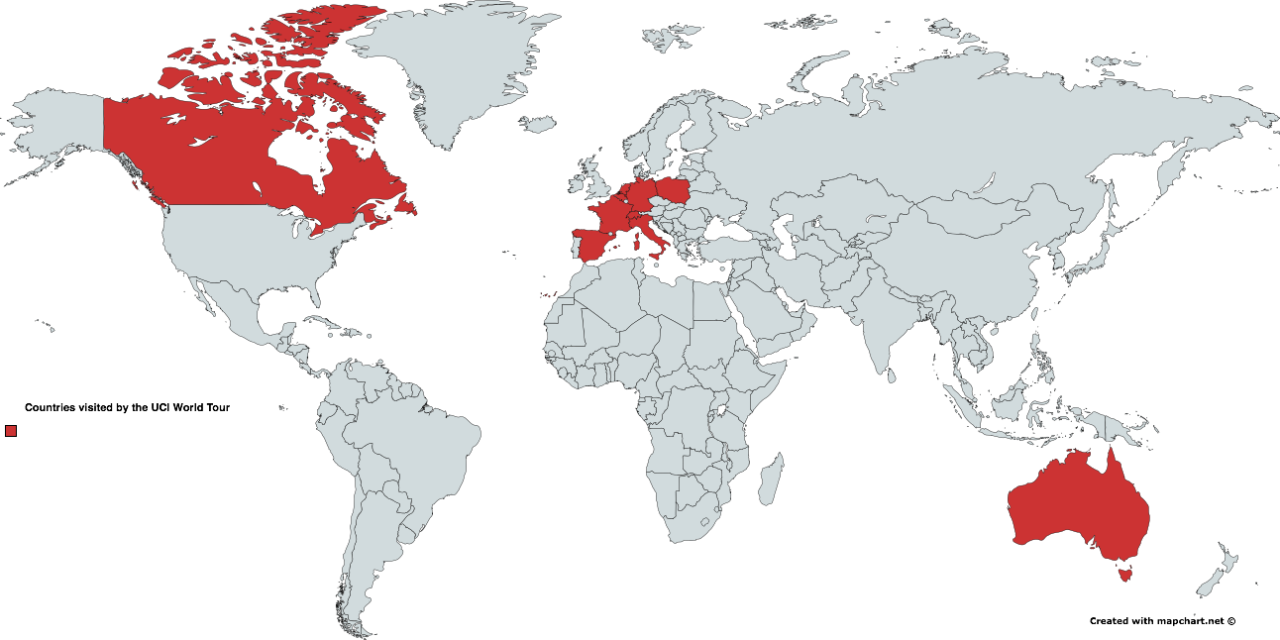 Geographic spread: the “World Tour” has never looked worldly. The map above shows countries visited by the 2016 World Tour and the one below shows those on the 2017 calendar. There’s more red but we’re still missing whole continents and even tagging a country is superficial, one visit to California doesn’t equate to reaching the whole of the USA. It remains very European with several of the new additions going to countries that have a lot of races already. Belgium, cycling’s truest heartland, had six World Tour races already, more than any other country, now with the Omloop Het Nieuwsblad and Dwars Door Vlaanderen it gets eight. France meanwhile retains its place as the country with the most number of race days, 39, thanks to the accumulation of the Tour de France plus Paris-Nice, the Dauphiné and more.

The longest weekend: the calendar has always looked incoherent to outsiders thanks to clashing races, for example Paris-Nice and Tirreno-Adriatico overlap. Superficially it’s like having two Formula 1 Grand Prix races on the same weekend or two IAAF Diamond League track meets on the same evening. Only cycling isn’t the same, the World Tour peloton is roughly 500 riders strong so it’s possible to have teams racing on different fronts and stars in each location, especially as the clashing races don’t face significant competition on television. However this logic will be stretched next year on the last weekend of July when the traditional Clásica San Sebastian weekend also hosts the Tour of Poland and new World Tour race the Ride London Surrey Classic meaning the peloton will be split three ways. San Sebastian is on a Saturday so it’s possible some riders to fly to London for Sunday’s race but that’s only one logistical component, there are team cars, trucks and more. Remember too that this is just after the Tour de France meaning all teams will have some fatigued riders too. 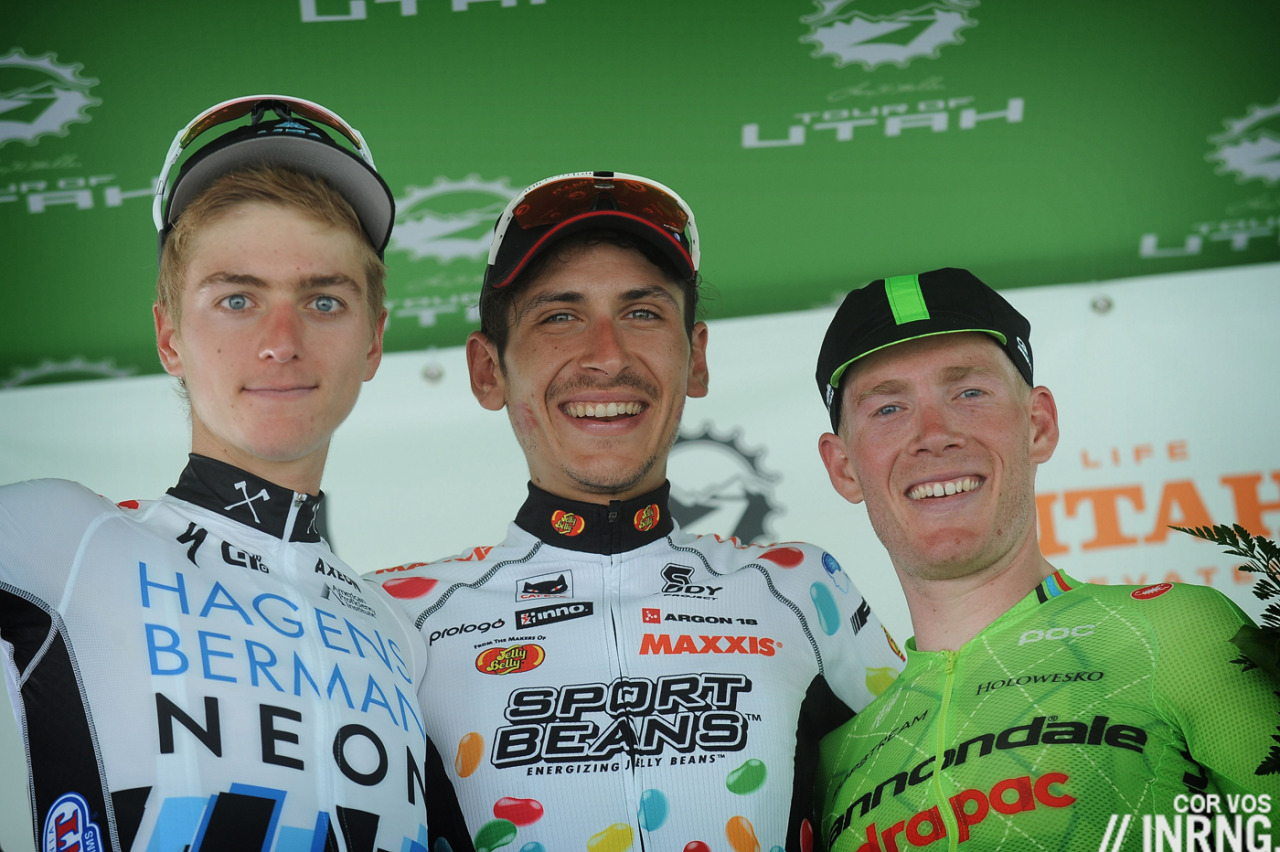 Continental divide: changes always have unintended consequences and one element at the margin here is the survival of UCI Continental teams. The Tour of California’s promotion could mean all the World Tour teams ride leaving only few places left for local invites from the lower tier Continental teams in the USA. These teams lose TV airtime and to cut things short their reason for existing: would Jelly Belly and Axeon Hagen Bermans stick or fold? A price to pay in order to grant the US a World Tour race? Perhaps but the solution is to have more US races on TV although easier said than done given the massive costs involved, it’s estimated the now defunct USA Pro Challenge in Colorado was costing close to $1 million a day to stage.

The Exception to the rule? However the new joiners could still have a secondary status whereby all the top teams are not compelled to attend. Here’s an excerpt from a UCI press release from June:

for new UCI WorldTour events, participation rules which will ensure that a minimum of 10 UCI WorldTeams take part will be proposed by the UCI for approval at the next meeting of the PCC.

So far it’s just a proposal but it’s saying not every World Tour team has to ride. As a result the field could be made up of more Pro Conti invites… and maybe some Conti teams too… which makes it look a lot like an HC race. So is it really the World Tour? Yes because the race is part of the series with corresponding premium points but it can lead to confusion where a rider may win the World Tour because their team rode more participatory events ahead of another rider whose team did not.

Conclusion
What does it all mean? The World Tour is a readily-used label that does signify a higher level of racing. This isn’t necessarily more entertaining nor more prestigious but the presence of all the top teams means a higher degree of competition.

The addition of 30 more days means a fuller calendar. A status change for races is just that, a change in label from HC to WT. Adding more events dilutes the contest, especially if some end up with secondary status where not all the teams have to attend, they pay for a premium label only to find some teams don’t want to attend. As such “World Tour” is an administrative label and fans will continue to discriminate between events on the calendar. The Omloop Het Nieuwsblad or Tour of California don’t become any more prestigious because of their elevation to the World Tour just as there’s no equating existing World Tour races like the Paris-Roubaix and the Bretagne Classic, each race has its place and status independent on the governing body. Watch to see if the new events are compulsory or not, if they are not then the label change will mean even less.