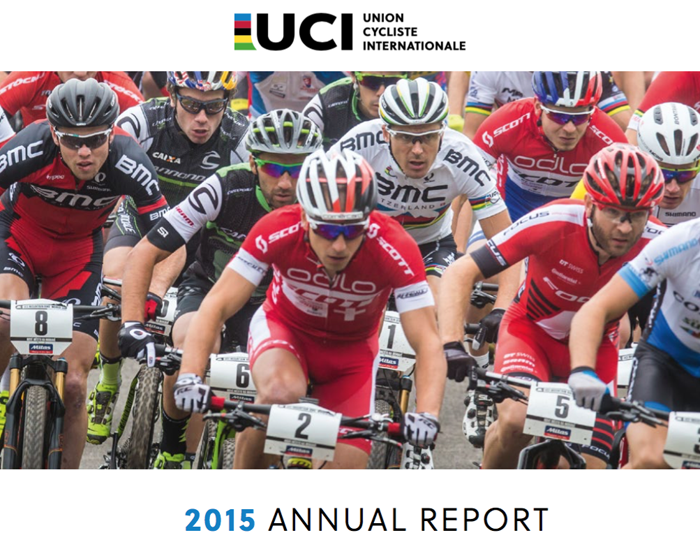 The UCI has published its annual report and accounts for 2015 on its website. It’s full of glossy images but let’s skip to the numbers at the back to see how the governing body is earning and spending its money.

The exchange rate matters to the UCI because in 2015 the Swiss franc soared in value and this was bad for the UCI which earns income in other currencies like the Euro. So several big income items suddenly became 20% less valuable when converted into Swiss francs as displayed in the accounts. It meant the UCI made a loss on the year, and this despite not having to fork out for the CIRC Report as it did in the prior year.

The UCI is not a business but a non-profit body which gives it considerable perks under Swiss law, it’s one reason many sports governing bodies are based in Switzerland. Any surplus generated during the year is not paid out but retained and this time the loss is covered by the UCI’s reserves. As a whole all the UCI World Championships brought in CHF 16.549 million meaning almost half of the UCI’s revenue comes from competitions to award those rainbow jerseys and, making an assumption or two, about CHF 10 million of this comes from the road cycling worlds. This means the Worlds is crucial to the UCI. There used to be a special rule that a rider who was under investigation for anti-doping could not start the Worlds to “preserve the serenity” of the event but this was dropped last December, presumably because if a rider is eligible to ride, say, the Vuelta a España then they can ride the Worlds too.

Here’s the UCI split of income and margins per discipline:

Road accounts for 45% of the UCI’s revenue and 70% of its operating result, in plain terms the UCI is big into road racing and makes most of its money from this. How? Largely thanks to the annual Road World Championships and the impressive host city fee, TV rights and sponsorship income generated by this week. Cyclocross saw a big jump in revenue while mountain biking runs at a loss again.

You might wonder how the UCI makes CHF 3.1 million from the Olympics during a non-Olympic year and the answer is that International Olympic Committee (IOC) awards the UCI a large pot of money which the UCI spreads out over each of the four years of the Olympic cycle. This raises the interesting matter whereby the UCI derives most of its legitimacy as the Olympic governing body recognised by the IOC but gets most of its income from pro road racing which means a tension: the UCI exists because of the Olympics, it runs because of pro cycling.

Some other snippets among the accounts:

UCI World Tour
Now onto the World Tour. The UCI gives accounts for it but the funding is controlled by a committee called the Professional Cycling Council which includes the UCI but also the teams, riders associations, race organisers and others. Here is the income statement for 2015: 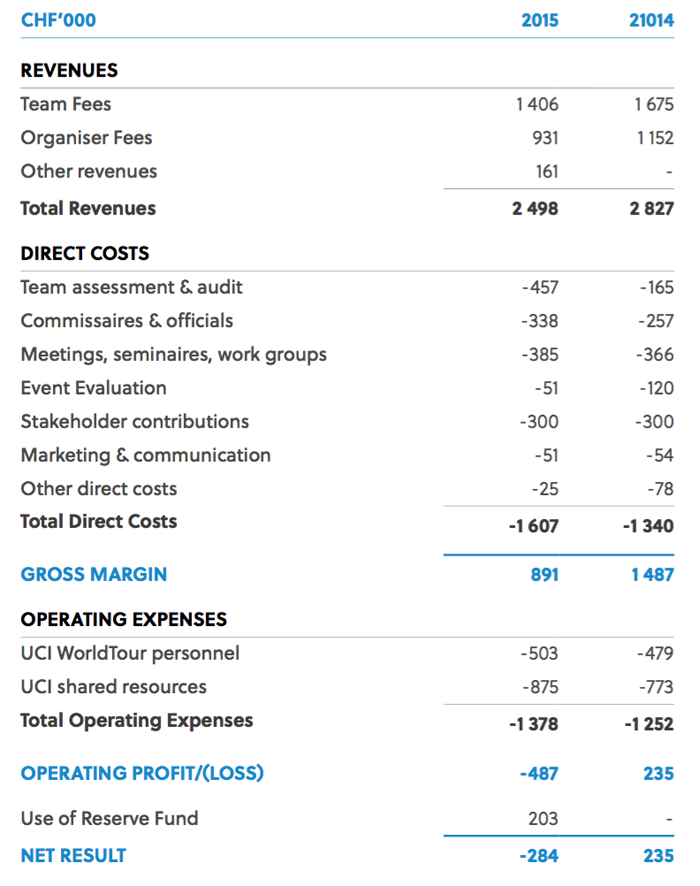 As you can see the teams pay in CHF 1.4 million in licence fees which works out at around CHF 80,000 per World Tour team.

One regular refrain on social media is that the UCI doesn’t want to do such-and-such because it makes so much money from pro racing. For example the allegation that the UCI didn’t want to rip up Astana’s licence last year because it would lose all that lucre from Kazakhstan. Only as the accounts show the World Tour is small in revenue terms and there are many costs involved. A licence fee from a team is income but there are costs to set against this like auditing the team’s finances and so on. A big jump in team audit and assessment costs put the World Tour accounts into the red for the year.

Conclusion
The report is a reminder that the UCI is about more than road cycling with sports like indoor cycling and BMX featuring. It’s a good resource full of stats on competition and more, for example there are more than 500 velodromes and 750 BMX tracks around the world but the above walks readers through the money but if you want all these stats, see the report for yourself.

In terms of finance 2015 was similar to 2014 and that’s what we’d expect from a governing body which has annual income from world championships and repeat income from fees and sponsorship. This is not going to fluctuate too much. But the Swiss franc’s rise meant earnings in Euros and Dollars fell causing a hit to the accounts and the Tour of Beijing’s demise added to this while hidden in the accounts we see the wage bill jumping by a million too, all causing a significant shortfall in 2015. As ever it’s the Worlds not the World Tour that generates the most money for the UCI.