A long day and a likely sprint finish, today probably isn’t the day to tune in for hours of TV expecting action or stunning scenery, save your anticipation for the sprint royale in Angers. Stage 2 Wrap: the predicted result but it wasn’t obvious. The early move of four stayed up well beyond their bedtime, the other teams seemed unwilling to chase and the gap was significant with 10km to go. Soon after Jasper Stuyven left his breakaway companions behind on the penultimate climb and had a good lead as he rode past the quays in Cherbourg only to melt on climb to La Glacerie where he was swept up just as the bunch started the rise to the line. Alaphilippe led out and Sagan came past to take the stage, the points jersey and his first yellow jersey. 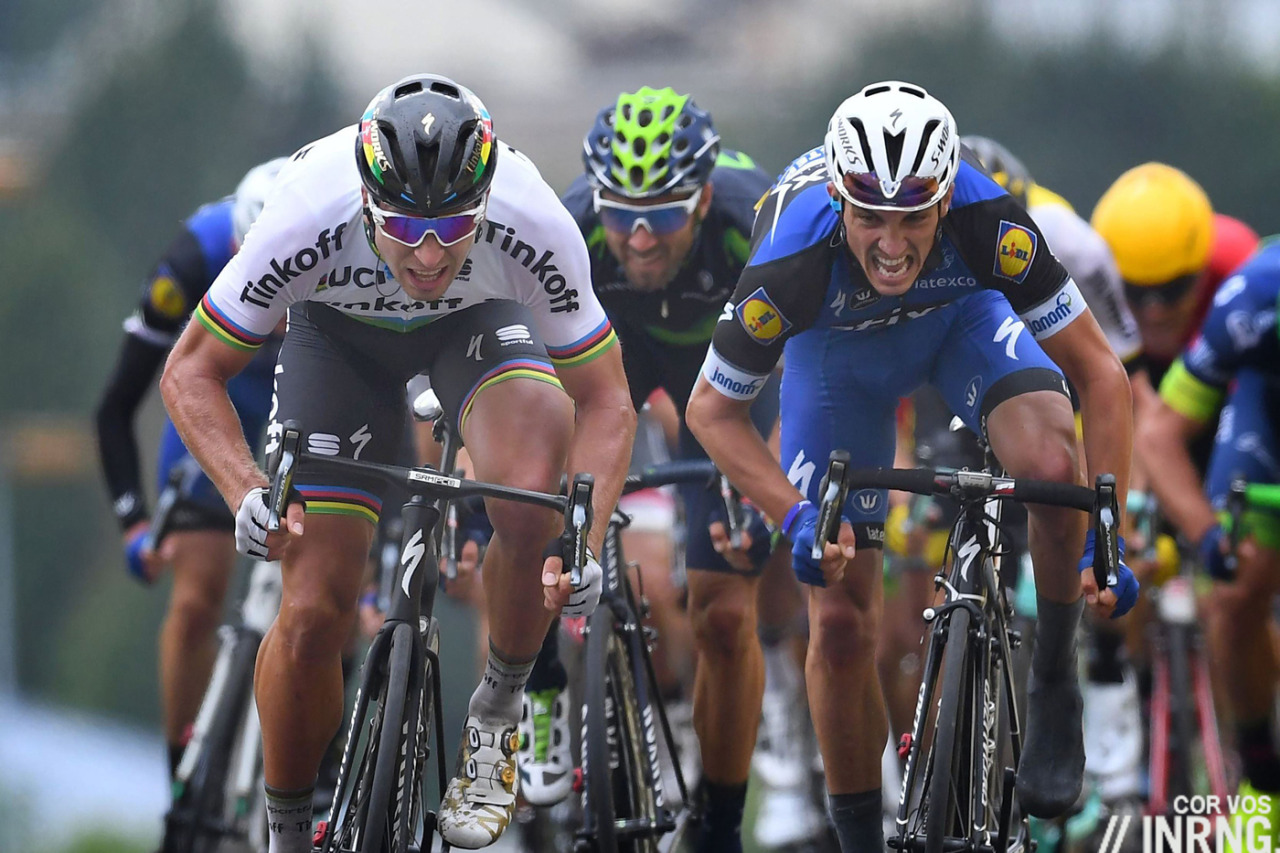 Behind Alberto Contador and Richie Porte lost time and it’s worrying in different ways for then. For Contador because he crashed again, this time he banged his left knee and was so sore he couldn’t follow the pace up the final climb which suggests fundamentally issues: he lost 48 seconds. Porte only had a puncture but lost 1.45 thanks to a slow wheel change from the neutral service and there was no teammate in sight to surrender a wheel. Hopefully he’ll prove this wrong but in past races once he’s suffered a setback he’s struggled to recover and even imploded; see his Giro in 2015 for an example. Implicitly or explicity his status with the BMC Racing team has changed. 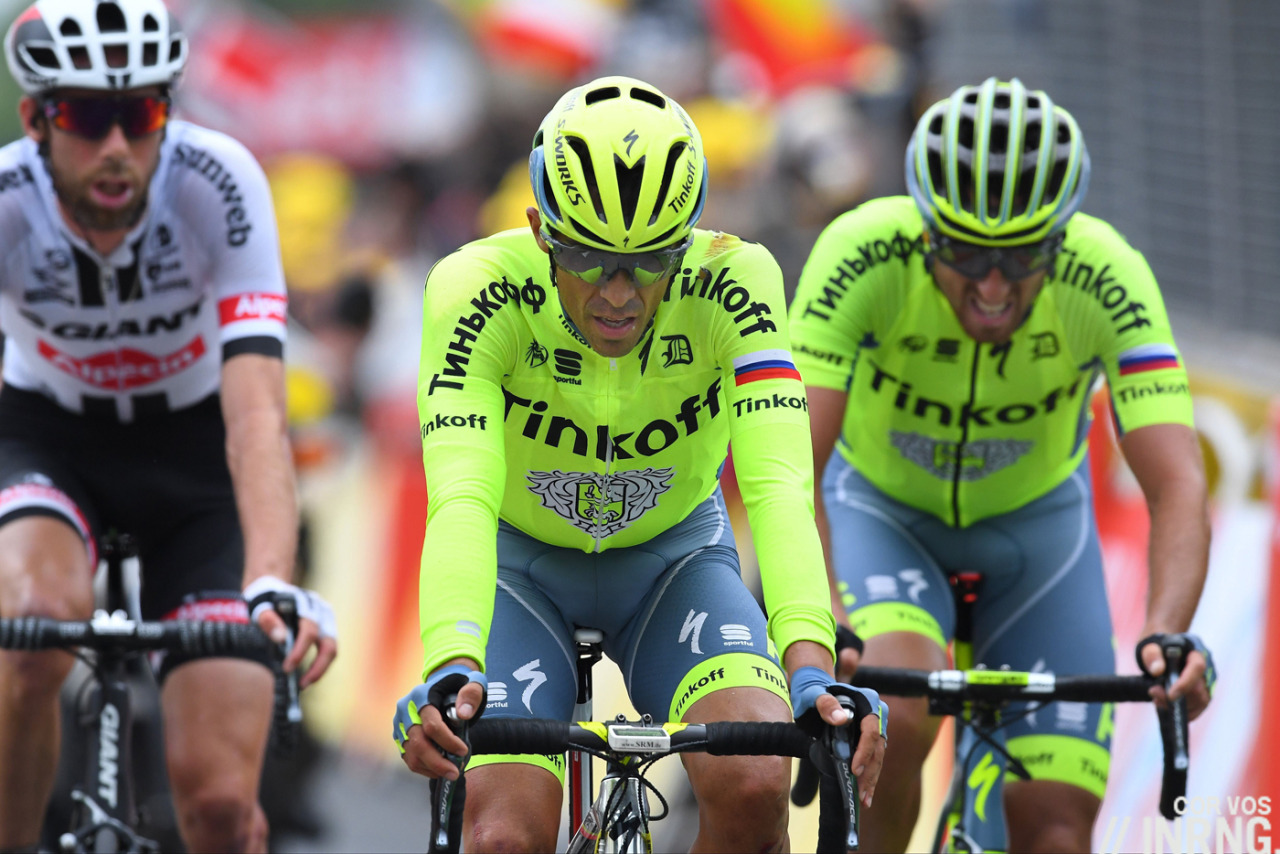 The Route: a long day with 223.5km to cover as the race quits Normandy to head south across a gentle and harmless land. They pass by roads used by smaller French races like the Boucles de Mayenne and the Route d’Adélie and at KM160 the race goes by Renazé, home of the Madiot brothers who run the FDJ team. Marc remains the totemic figurehead but is just that while Yvon is the DS who directs the team on the road. If you want more thoughts on Marc Madiot then the book review of Parlons Vélo says as much about him as it does the book. The Finish: a city finish which is to be celebrated because often Tour stages end up on the soulless outskirts of town. Today the race finishes in the heart of Angers which, despite the name, is a rather pleasant and relaxing place. It’s full of boulevards and the race runs over the Maine river to find the 1KM to go banner and then there’s a slight uphill at 2-3% before a sweeping wide right-hander which leads onto the 300m long finishing straight where the slope levels out.

The Scenario: a likely sprint finish, the long flat route is hardest at the start and so those who want to barge away will be left to get on with it and the chase can be coordinated later on. There are no surprises on this course, someone like Fabian Cancellara could try a flyer in the finish but even the final corner is wide and offers little advantage to the leader. Look to see how the sprint trains work, once upon a time the likes of Saeco or Highroad seemed to boss the finish for ages, now the fashion is to surge as late as possible after someone else has done the work. The Contenders: Marcel Kittel, André Greipel or Mark Cavendish? We can extrapolate arguments for all three based on Saturday’s sprint. Kittel didn’t get a good lead out and had to go in the wind for a long time but still ran close. Greipel had a similar story and started his sprint without a leadout and from further back while Cavendish had the craft and speed to win. All three are obvious picks and how they react to and against each other will be interesting. If pressed, and that’s what these previews are all about, Kittel is the prime pick.

The others? Peter Sagan of course but surely the names cited above are faster and if the finish is slightly uphill it’s no way selective enough. Alexander Kristoff will miss Michael Mørkøv who crashed hard on Stage 1 but the long finish suits him, again if he’s missing speed expect him to wait for the others to fade in the coming days. Bryan Coquard wanted yesterday’s stage but that all went wrong, tomorrow suits him more but he’s bound to try. Dylan Groenewegen is bound to win a stage one year and the thing with sprinters is that they often triumph from a young age; he’s been ill with stomach problems which is a worry for a long stage but if these have passed then watch for him. Otherwise Edward Theuns, Dan McLay and Christophe Laporte could place. Sam Bennett is too bashed up to feature, he was last yesterday all by himself.

Weather: a cloudy start and then the sun is forecast to appear with a top temperature of 21°C and little wind to speak of.

TV: given the flat route and benign weather forecast this is probably a day to tune in for the sprint rather than watch the rural procession that precedes it. The finish is forecast for 5.20pm Euro time. No other race attracts as much TV coverage but if you can’t find it on TV at home cyclinghub serves up a pirate feed.