Have you ever seen anything like it? Chris Froome is seen running up Mont Ventoux in his yellow jersey. It was an extraordinary image, the race leader bereft of his bike as he ran past the cheering crowds.

Here’s a look at what happened and an attempt to make sense of it all.

As the yellow jersey group climbed Mont Ventoux Nairo Quintana tried two attacks but he was easily reeled in by Wout Poels. It seemed as if Quintana might be trying a couple of soft moves before a big attack as he’s done this before but in time Chris Froome attacked, Richie Porte followed, so did Quintana and then Froome kicked again and this ejected Quintana. Soon after Bauke Mollema made his way across.

The trio were making their way through the crowds until the TV motorbike stopped suddenly, reportedly blocked by the density of the crowds according to one source, Europe 1 radio said one motorbike stalled forcing the TV moto to brake hard; later the Tour race director Christian Prudhomme said he did not know what had happend and there will be an enquiry to find out what happened. What’s known is the motorbike stopped and Porte went flying into the back of it while Mollema and Froome landed on the ground having both become detached from their bikes. As Mollema picked up his bike and started riding Froome’s bike was broken, it had been hit by a police motorbike behind. Froome started running up the road. As he ran tried to call his team via race radio but the team car was far behind the group that Froome had attacked from. He he came around a bend in the road the waiting fans.

Froome eventually got a bike from the Mavic neutral service car but this had flat platform pedals and he was struggling with it and eventually got a replacement bike from his team car and finished 1m40s behind Bauke Mollema and 1m20s behind a group with Nairo Quintana, Adam Yates, Fabio Aru, Louis Meintjes, Joaquim Rodriguez, Romain Bardet, Alejandro Valverde and Tejay van Garderen.

At this point Adam Yates was the virtual yellow jersey. Once the riders had crossed the line Thomas de Gendt got his stage win podium ceremony and collected the mountains jersey for his efforts too but there was no immediate yellow jersey ceremony as the race jury of UCI commissaires was locked in a meeting to decide what to do.

In the end the jury unanimously decided to reclassify Froome and Porte with the same time as Mollema. Here’s the top-20 today, not the adjusted timings for Froome and Porte. 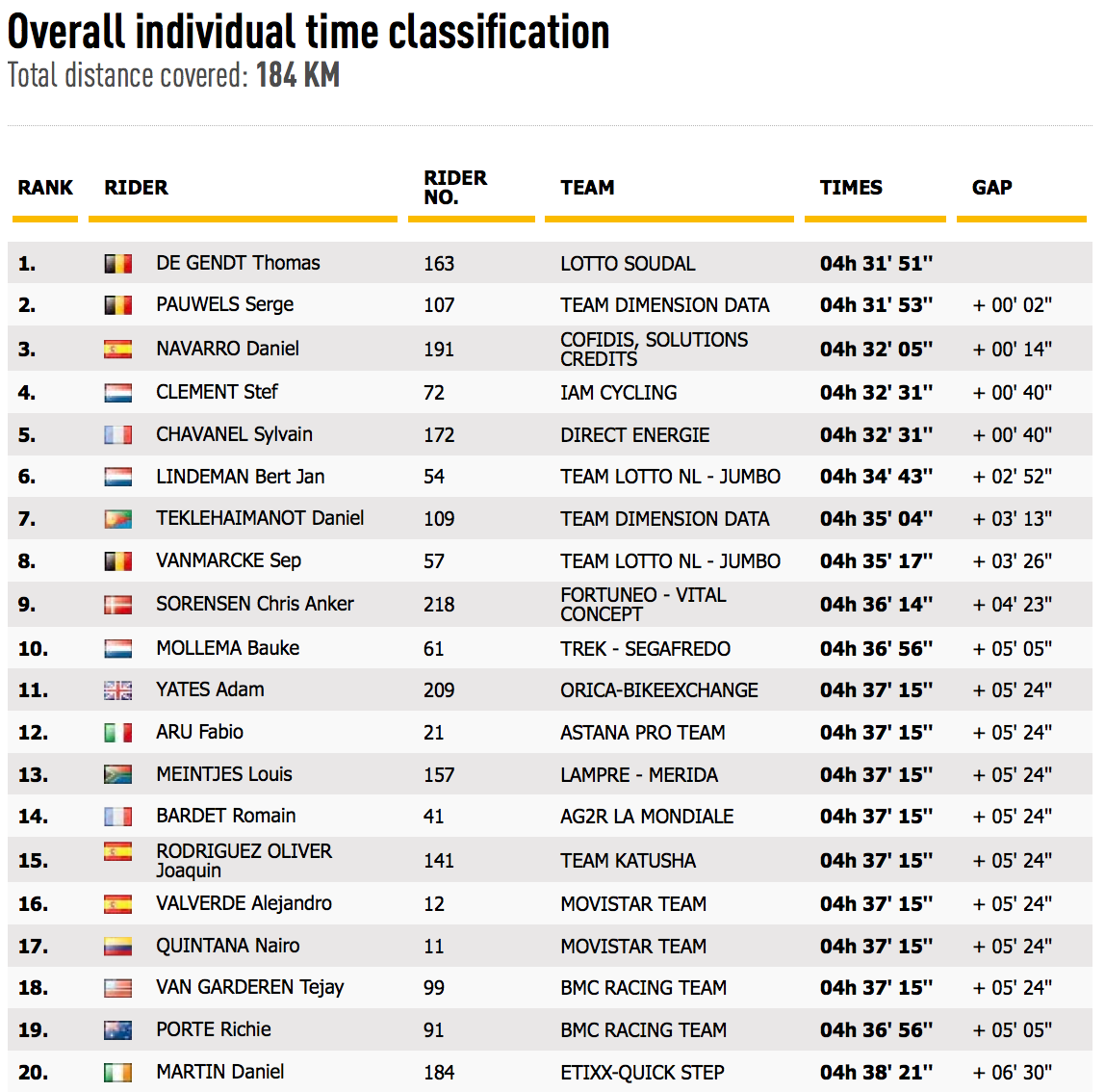 Of course Mollema lost time too because of the crash but the jury cannot calculate a compensatory amount of seconds, the convention is to place riders alongside those they were with at the time of the incident. Let’s look at the rules here:

That’s the relevant part of the UCI rulebook and the “race incident”. As you can see it’s an open-ended rule that can be invoked in the event of an “accident or incident” that influences the “normal conduct of a race”. It’s not clear yet exactly what the rationale was but it appears to be an ex post decision to temporarily neutralise the race at the time of the incident.

Is this satisfactory? Of course not, the whole scenario today was chaos. The rules are not there to redistribute karma however if the race was stopped because the road was blocked by traffic then the rule above can apply.

It’s left some team managers annoyed, notably Trek-Segafredo’s Luca Guercilena while others, like Team Sky, are satisfied with the result of the commissaires while seemingly having little to say about the incident. When interviewed on French TV Dave Brailsford implied it was just one of those things and started joking about entering Froome for the Paris marathon.

For now that’s it, it’d be good to get some kind of reasoned decision from the UCI jury so we know their rationale and if more info and explanation appears this piece will be updated accordingly. Can you run?
Finally FAQ today. Yes, you can run. It happens in the spring classics when riders get in a logjam on, say, the Koppenberg but normally riders shoulder their bikes. The rules say you need to cover the course under your own steam and must cross the finish with your bike (rule 1.2.109), you might remember images of riders crossing the finish line holding their bike in the air. Rule 12.12.14 says any “attempt to be placed without having covered the entire course by bicycle” brings elimination but the spirit here is more about what the rule calls “wilful deviation” ie taking a short cut or getting into a train or a car rather than jogging along.