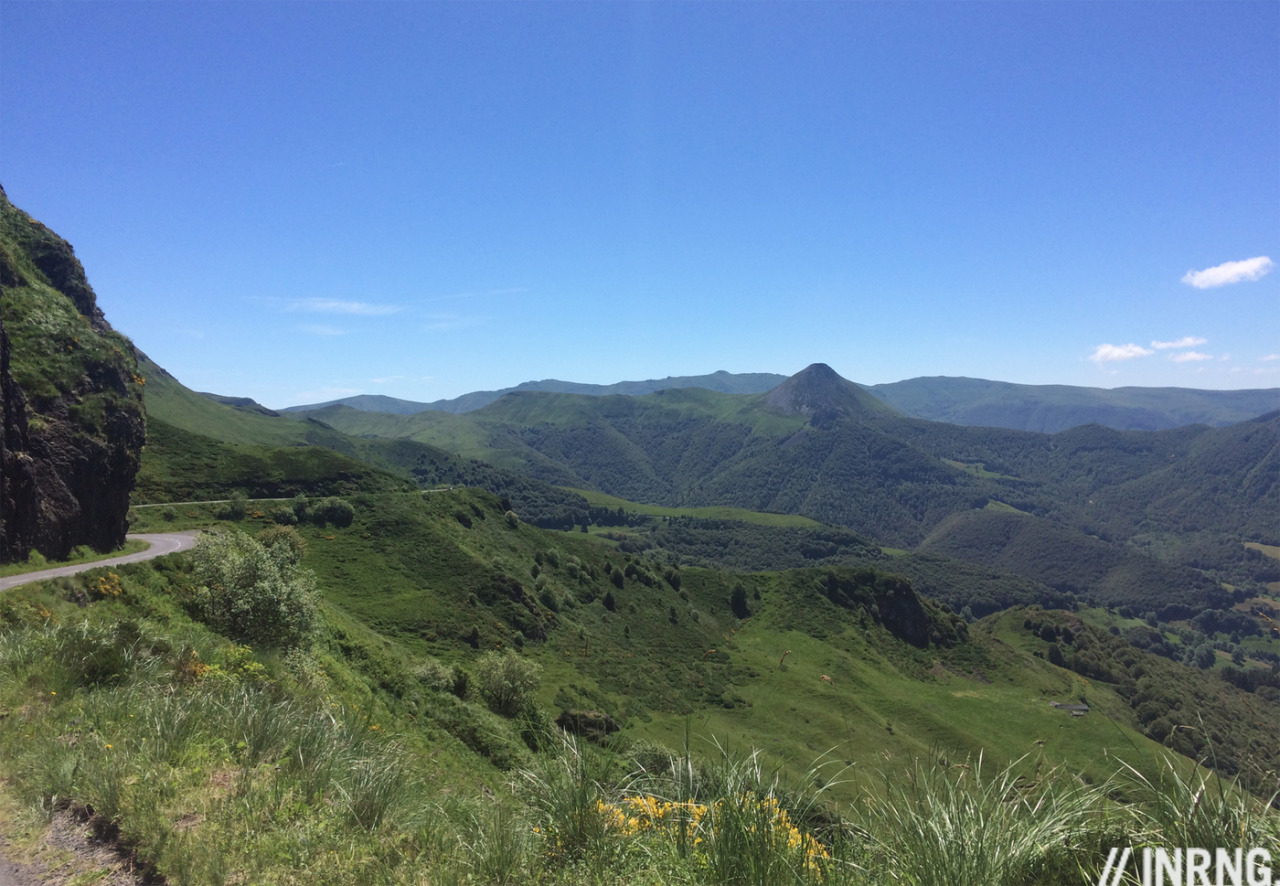 Yesterday’s Tour de France stage visited central France and the Cantal with its volcanic landscapes and lush green valleys. The race doesn’t visit very often, in fact few visit this region which is all the more reason to enjoy cycling on these roads.

The Route: the D680 heads north out of the town of Salers in the Cantal department of central France and then turns east towards the mountains. This is one route to the top but there are several others, more of which later. From Salers it is 20km to the summit at an average gradient of 4.8%. The Feel: Salers is a pleasant place to visit in the summer but with the sense that it wouldn’t be the same in winter, the buildings are made from dark volcanic stone and must look grim on a wet November day. The road starts climbing straight away. This is a land of a million wooden fence posts strung with barbed wire. They keep the local cattle in the fields but for the cyclist it’s hard not to imagine strips of Vacansoleil-DCM kit dangling on them as this is the region where Johnny Hoogerland was rammed off the road during a stage of the Tour de France.

The Col de Néronne is the first part of the climb, the road rises up the side of the U-shaped valley, a geography lesson on wheels with rock features galore. It’s fast, the gradient is 3-4% and the top of the pass is visible from afar but it pays to look around, it’s the views to the side that are best. The pass arrives quickly and isn’t the crossing point you normally associate with a col as the road simply carries on, there’s not much of a descent to come. The landscape is reminiscent of New Zealand, the volcanic terrain turned green thanks to abundant rainfall and there’s more livestock than people. The comparisons end the moment you pass a house or a farm building, many are ancient and the more you look the older they appear, for example the slate tiles on a roof appear to have been cut by hand. This feels like time travel, you half expect to meet a horse and carriage going the other way and the illusion is only betrayed when a camper van comes down the road instead, or your phone shows a 3G signal.

The road resumes climbing with gentle slope. Look for the bridge and the warning sign for cyclists to announce what’s coming and if if those clues are not enough, look up above you and you can see the top of the pass and it’s worryingly near. Normally near is good, but this is near, as in above, rather than across and you quickly discover just how direct the road is as it rises to 12% and barely relents for the next three kilometres. Once the trees give away the gradient is steep and the road bends around to the right with a long ramp up to the pass, there are sustained moments at 14%. The views are stunning but focus is on trying to make the top of the climb. At the top there’s a small café and tourist halt along with a view point. You can continue in different directions via other passes. 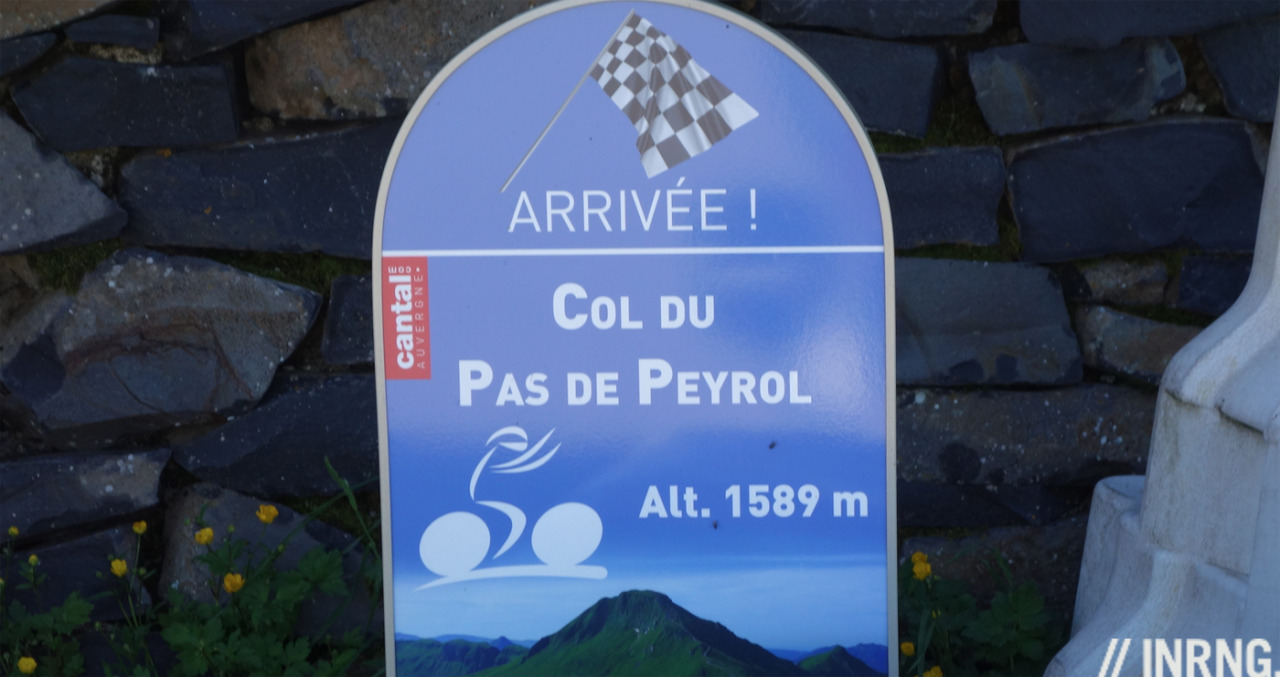 The Verdict: a great climb amid some impressive scenery. By itself it’s not going to draw people in the same way Mont Ventoux is a destination for thousands of cyclists but climb up and the best part is yet to come, once at the top you can choose where to go next and to explore other parts of this unusual landscape.

The History: the Puy Mary was first climbed by the Tour de France in 1958 and has now been crossed nine times by the race. It’s never been as famous as its volcanic cousin the Puy de Dôme which sits 75km north and has hosted legendary summit finishes but it now closed to the Tour and cycling in general. Volcanos: they’re all extinct of course, in fact they were active so long ago that erosion has taken its toll, to the cyclist the Puy Mary looks like an ordinary mountain. However the rest of the region is dotted with cones, lumps of dark volcanic rock, spa towns with hot water and other clues to the past.

Ride more: describing the “Tour de France route” above is a pretext to introduce one climb among many. The Puy Mary has three roads leading to the pass and these each have their own approach roads and so on: the longer your ride the greater the options. If you enjoyed the scenery on television there’s so much more, the best thing is the choice of routes in the region. You could spend a week doing routes that cross the Pas de Peyol as a central feature if the day only with different directions, loops and side roads or you can skip the big climb and go in other directions, crossing all sorts of other mountain passes and saving your knees as most of the other climbs are between 3-8% rather than the more savage slopes.

Travel and access: Salers was listed as the start point but take your pick from many towns like Riom with its wines, Murat at the foot of the road to Le Lioran and other passes and the larger town of St Flour. There’s autoroute and rail access to the region and trains but little in the way of international airports, Clermont Ferrand is the nearest big city.

Picking the right time of year matters, this is one of France’s wettest regions as incoming damp air from the Atlantic rises and cools over these peaks to pour down. The lack of altitude means these roads are not closed for months on end over the winter but the probability of rain means that this region is not necessarily viable in, say, March or April if you want some early season climbing. Better to visit in the height of summer.