Most people visit Andorra for the skiing or to buy tax-free cigarettes so the Tour de France’s summer visit makes an odd choice. As the race prepares to leave the Pyrenees here’s a look back at the opening phase of the race and a quick take on what’s coming up. Sunday’s stage to Andorra was a grind, first in baking heat and then a hailstorm on the final climb that was halfway between exfoliation and bruising. Tom Dumoulin won thanks to some economy on the way, he was not working in the break nor sprinting for the mountains competition which left him with some energy to go on the final climb and use his time trial abilities to plough on up what is a long but not steep climb. Dumoulin and the previous success by Stephen Cummings show the Tour is not always locked down.

We got a flurry of attacks from the GC contenders on the final climb to Arcalis  yesterday. Team Sky had used their mountain train tactics all day then broke with this with an attack by Sergio Henao. They’ve did the same the previous day too. It’s an obvious bait and switch: Henao remains a danger on GC and cannot be ignored by the others but if he’s brought back then Chris Froome can counter. Dan Martin made a flurry of attacks which had people wondering why. Perhaps it’s simply because he can? He was hanging with the leaders and felt able to go and go again and kept jabbing at the lead group like a fencer probing an opponent. He’s looking better than ever, his past wins in Liège-Bastogne-Liège have seen him race efficiently but yesterday he looked to be giving it everything to go clear. The confusion at BMC Racing continues, confusing only because if the Tour de France is an exercise in hierarchy then it confounds many when a team shows up with two equals in Richie Porte and Tejay van Garderen. The co-leadership story has been questioned all year, almost if one rider were to express a musical taste then “divisions” are appearing. What really matters is the ability to race together, to achieve common aims. Only it’s here that things aren’t playing so well, the two are not yet playing off each other. Changing form and fortunes of make this a dynamic situation. Porte was attacking on the climb to Arcalis but this was probably the right thing to do, if he’d stayed behind to tow van Garderen he could have perhaps helped save 10-15 seconds but van Garderen would still have lost time. By contrast if Porte can track Quintana and Froome and the other climbers he can hope to take time in the time trials and even get back into contention for the podium. In spite all of this perhaps Greg Van Avermaet’s been the biggest advert for BMC frames? 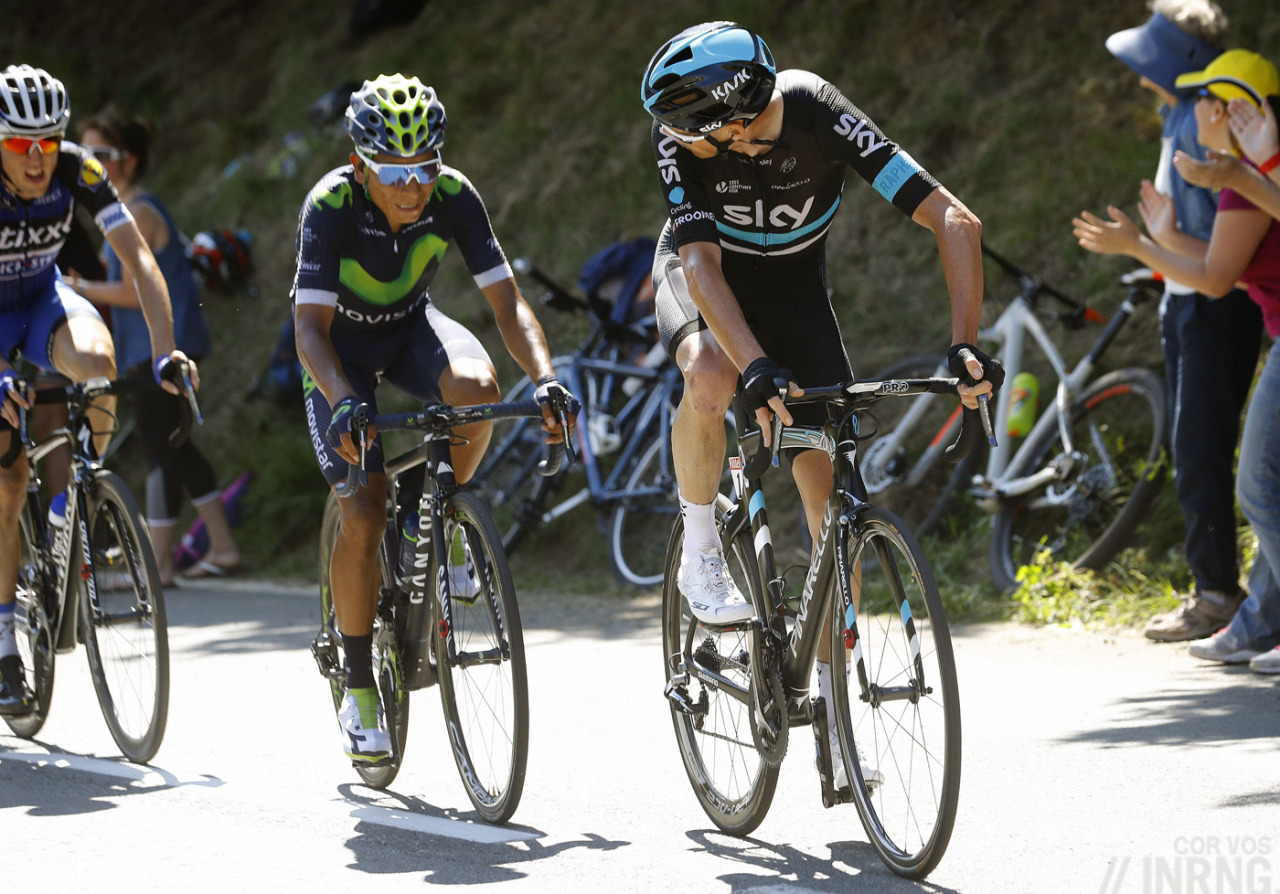 Talking of tracking moves Quintana’s wheelsucker routine came in from plenty of criticism but there’s an element of cost and benefit here. If he had managed to get away, a capital and bold IF, then what could he have done, taken back 20 seconds in two kilometres. With a headwind on the climb to Arcalis that would have been good going but the rewards small. Worse, having the yellow jersey now is a burden. It means the bother with daily press conferences, being asked the same questions 20 times a day, shaking germ-laden hands, being late for the massage. This time last year Froome left the Pyrenees with over three minutes on his nearest rival, now it’s just a matter of seconds. Froome’s stage win and the breakaway on the descent of the Peyresourde was exciting. There’s talk it was premeditated, he started the day with a 54T chainring but if you’re able to have a mechanic to change your bike to suit a different course every day you’d have a 54T or even a 55T for the Peyresourde descent given it’s such a long downhill with so few corners. Sky remain the dominant team, they have more riders left in the finale than the others and this is locking down the race to some extent but tactics like Henao’s attacks mentioned above are changing from the formulaic image inherited from the Wiggins era; as a thought exercise imagine what would have happened had Henao done that when Wiggins was riding for the win. As well as frustration with Quintana’s stoicism there have been several “it’s boring” comments about the first week. It’s always been this way, whether in recent blog posts or columns in L’Equipe from yesteryear, for example the wonderful report that “the stage slumped into the the most mournful lethargy” from 1968. A lot of France is flat and featureless so even if a stage distance is shortened from 220km to 120km you still won’t get action: there simply isn’t the terrain to exploit, especially if the wind doesn’t get up which explains why the Tour has been keen to use the pavé of the North of late and in the absence of this to spice things up with an uphill finish here and there whether in Cherbourg or Limoges. It does make for bad TV if you sit down for hours only to see minutes of action don’t say you’re not warned by the daily previews here. All this is to view the Tour de France from the sole viewpoint of a screen. TV maybe king but the roadside crowds are the race’s loyal subjects and to chop 100km off a stage or two is to deny hundreds of thousands of people the chance to enjoy a day out by the road or decorate their villages in yellow. Besides if the second stage finished atop Alpe d’Huez many would complain the contest is over, a three week victory lap awaits. Or just look at the Vuelta were people complain the repeated summit finishes deliver repeat results.

As well as what we see there’s what we don’t see. Several teams have had a quiet time. Cofidis are bereft of Nacer Bouhanni while Christophe Laporte’s three top-10 finishes don’t get him the same “wow” that Dan McClay enjoys, the New Zealand-born Brit (why so many British cyclists born abroad is a headscratcher) has helped ensure Fortuneo-Vital Concept are visible, along with Armindo Fonseca’s long solo raid. Direct Energie have been backing Bryan Coquard for the sprints to the point of saying non to Sylvain Chavanel going in the day’s breakaway when the race rode through the town of his birth. Which leaves Bora-Argon 18 as the breakaway fodder. Among the World Tour squads several seem to be struggling to get noticed but there’s plenty of opportunity to come, for example Orica-BikeExchange have traditionally thrived in the first week of a grand tour but they’re said to be sitting it out to wait for opportunities later on. The next week sees the sprint and points competition resume with a hill late on tomorrow’s stage and then a flat finish on Wednesday. As suggested in the pre-race look at the points competition there are a lot of pure sprint finishes where Sagan can place but not win meaning he can surrender 20, 30 or more points. The odds still suit Sagan, he’s able to go in the breaks in the mountains but we now have a contest rather than a formality. How long will Mark Cavendish continue? It’s hard to see him leave the race while wearing the green jersey and the coming week has two nailed-on sprints in Montpellier and Villars-les-Dombes. 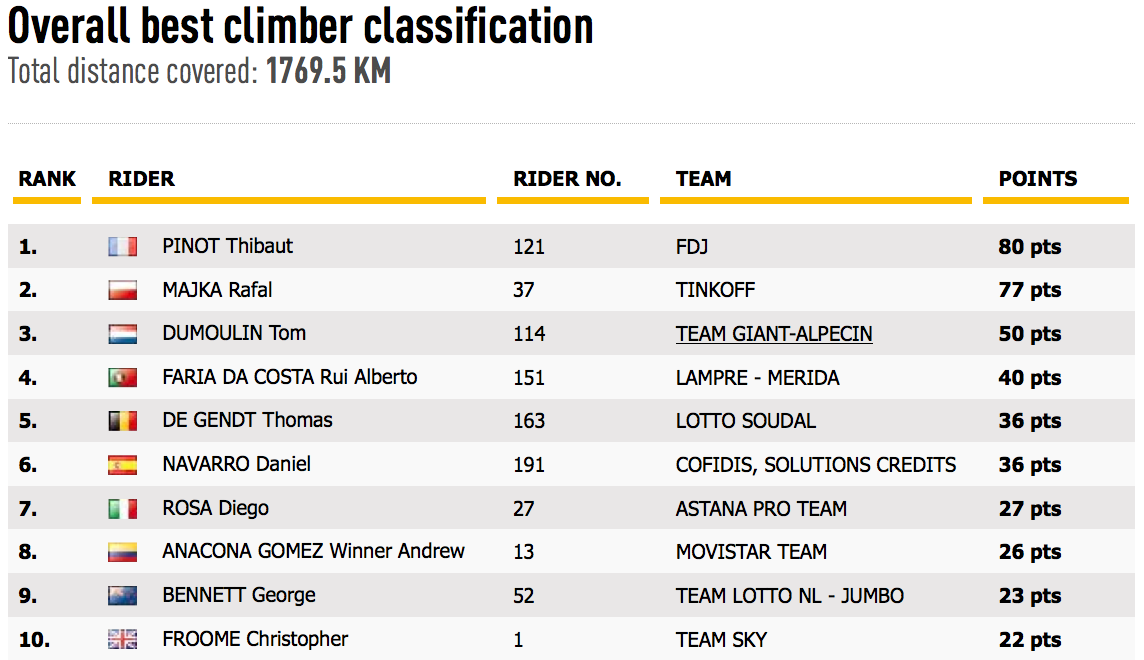 There’s also a battle in the mountains competition with Rafał Majka and Thibaut Pinot pulling ahead. Both are in an interesting position, Pinot trying to salvage something after coming into the Tour de France either short on form, stale or weighed down by the pressure depending on the source you read and he leads a team built around him: FDJ’s Tour is Pinot’s Tour. Meanwhile Majka challenge could see Tinkoff taking two of the three jerseys in the race.

Tinkoff of course wanted a third jersey but Alberto Contador’s two crashes and talk of a fever saw him abandon the race yesterday. Could he have won? We’ll never know but as we saw yesterday when he started the stage on the attack he would have lit up the race trying.

Rest days are just for reviewing what’s happened but also forward-looking and we get sponsor and team announcements. Alberto Contador is set to ink a deal with Trek-Segafredo but remember people can sign pre-contracts in private but they cannot sign the formal contract nor announce so much as a handshake until 1 August. Still plenty of business is being done and Andorra is full of rider agents. One missing element is the Bahrain team linked to Vincenzo Nibali. L’Equipe reports that ASO has not even heard from the mooted team about showing up to launch – ie to request accreditation – or make an announcement, let alone invites going out to the media to come and relay the message. It seems the team is on track as Brent Copeland says. Maybe it just doesn’t want the publicity? Who will win the Tour de France?
Time to revisit the ratings. Chris Froome and Nairo Quintana remain the best placed. Nothing is certain for them but it’s the battle for third place that’s wide open. Richie Porte looks the most complete rider given the mix of climbing and time trials but he’s over two minutes down following his expensive puncture in Cherbourg, still if he can keep climbing with the best then he will slowly overhaul the others given the riders in contention will worry about the Ardèche time trial on Friday. Porte could still have his annual jours sans what is telling is that mentally he’s still in the race, he’s not turned to stage poaching or the pursuit of polka dots.

Among the others it’s hard to see an obvious pick. Dan Martin looks excellent in the mountains but is he consistent and can he time trial? The same for Adam Yates, Bauke Mollema and Romain Bardet.