A 3.9km prologue. Calling this an uphill time trial is to downplay the effort, it’s an up-mountain race and as prologues go this kind of course is a rarity. With so many contenders for the race not having raced for weeks or more this will give us an immediate test of form. The Route: Les Gets is a ski resort which doubles up as a big mountain bike destination in the summer where the ski lifts are opened to carry bikers to the top of the slopes. No such luck for the racers today. 3.9km up Mont Chéry which roughly translates as “Mount Darling” but there’s nothing endearing about this.

A flat start for a few metres and then there’s a tight bend onto the uphill road with 10 hairpin bends along the way. At first it’s on an existing, old road with cracks, sunken inspection covers and an irregular surface. The gradient bites from the start but it will get much steeper. The second hairpin is very tight and shows one of the keys to the course here: a rider can cut the corner and the course short by riding through the apex but it’s very steep. Go wide around the bend though and they’ll add metres. So it’s all about getting the right line, enough to save time but not too much to stall on the inside line. It suits the punchy climbers. As the route climbs up it meets some newly-surfaced tarmac which is great… only here the road is at its steepest as it snakes through a series of steep hairpin bends and almost resembles riding up a downhill ski course. Once they’ve passed the 1km to go banner the slope eases but who will have the energy left to click up through the gears? 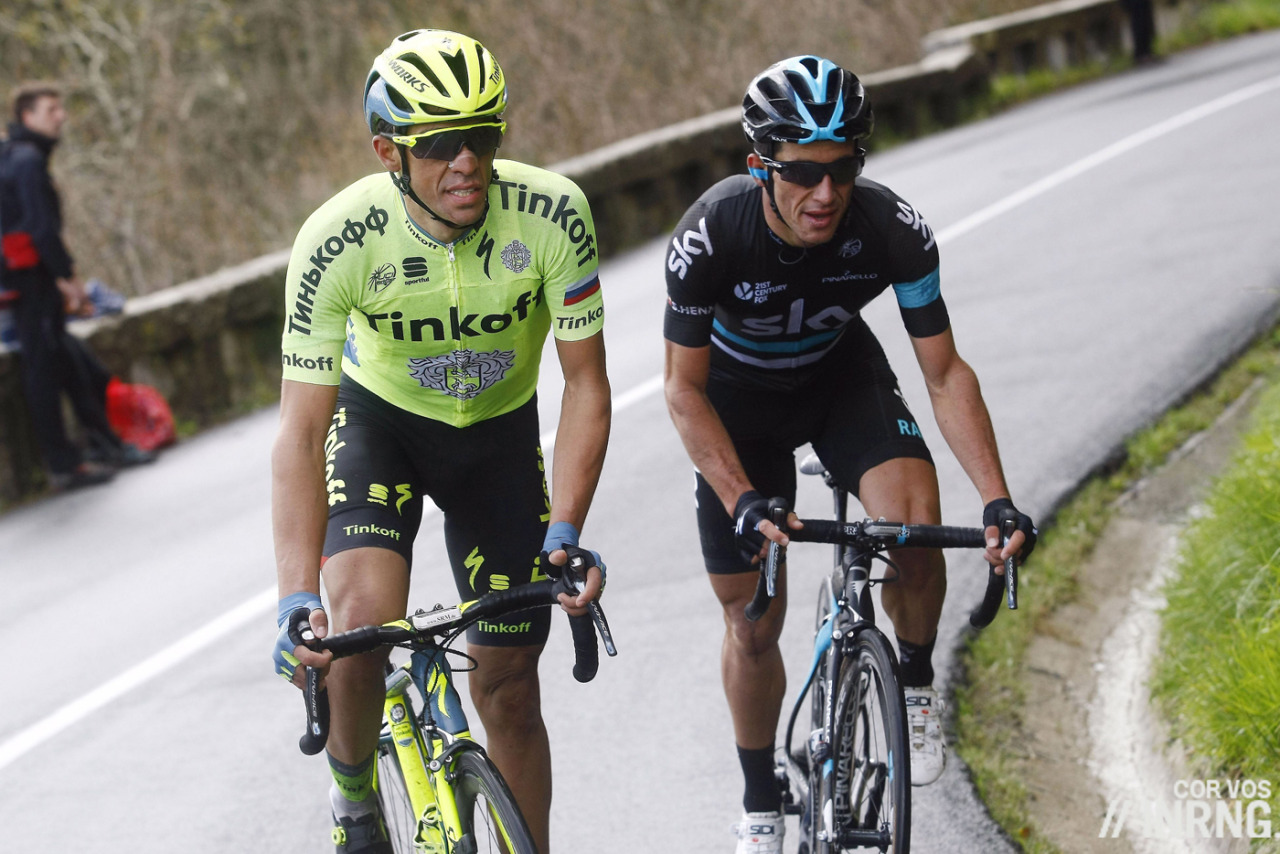 The Contenders: a short effort. On paper it looks like a pure test of W/kg but the tight bends can make a difference, being able to lean into them and then sprint out of them, or at least to turn on the power to pick up speed matters so it’s . There’s not much to go on in the form guide and the result today will give us a good view of who is climbing fast for the week to come.

Alberto Contador is well-suited to this effort given he climbs well. He likes to climb out of the saddle too and his “Spanish dancer” routine is ideal for this course given the need to stomp on the pedals in places. He’s not a regular winner of time trials but won the Tour of the Basque Country’s time trial stage which included a hard uphill climb.

Who to pick from Team Sky? Chris Froome obviously but we can’t gauge his form yet. Presumably he’s in skeletor shape and copes well with irregular climbs. Meanwhile Sergio Henao and Mikel Landa are the other picks, Henao in particular was third in the Tour of the Basque Country’s TT.

Adam Yates (Orica) was fourth in the Basque Country time trial and on a day when he wasn’t feeling great so he could shine again here. Riche Porte is another good choice, his smaller build and explosive climbing style makes him well-suited to this kind of effort.

An uphill time trial? Given Thibaut Pinot (FDJ) is a climber who has become a top time triallist you might like him for today but this is probably too explosive an effort for him. Astana’s Fabio Aru‘s form is unknown but probably a safer pick even if there’s only seconds in it.

Etixx-Quickstep have two options. Few are better at steep climbs than Dan Martin while Etixx-Quickstep team mate Julian Alaphilippe is a curiosity, this is surely too long for him but let’s see. Finally Romain Bardet (Ag2r La Mondiale) and Bauke Mollema (Trek-Segafredo) have the explosive power too.

Weather: cloudy and cool with a top temperature of 15°Cand the outside chance of rain later which will matter as grip is a concern on the steepest parts.

TV: live on TV from 1.30pm to 3.00pm Euro time. It should be available on the same channel you watch the Tour de France and/or Eurosport. If not then cyclingfans, cyclinghub and steephill.tv have schedules and streams.

Mountain prologue: prologues date from the 1960s, the first being used in the 1967 Tour de France, a ruse to make the riders do an extra stage in front of the public. The riders raced but it was without consequence for the GC, it just meant someone could wear the yellow jersey on the first proper day. The concept was apparently invented by Paris-Nice race boss Jean Leuliot who put it in his race in 1968 and it was rapidly copied by other event. But an uphill start? This is very rare. The last uphill opener of a major race was probably in the 2013 Tour de Romandie won by Chris Froome and the course had some level sections. The Dauphiné had a couple of hilly prologues in the 2000s each won by Iban Mayo but they included flat sections and a descent too.