Mountain stages have their ups and downs. The profile shows us that. Today brought a different kind, the tables were turned after Steven Kruijswijk crashed and cracked, Esteban Chaves took over the race lead and after weeks of feeling the pressure Vincenzo Nibali let it all out on the road to Risoul, won the stage and sobbed under the podium. And there’s still a giant mountain stage to go.

A fast start saw the peloton unable to let a group go, no sooner did one move try then it got reeled back and it took until the Agnello for a move to go clear including one from Orica-Greenedge, two from Astana and three from Movistar. Plans were being executed. Michele Scarponi went over the top to claim the Cima Coppi prize and the Torriani trophy. Behind the big names thinned the group until at the summit it was just Nibali, Chaves and Kruijswijk, proof perhaps that Valverde does struggle with altitude. Then on the descent Kruijswijk crashed, suddenly running out of road and riding into a wall of snow. Unfortunate but what if the snow hadn’t been there and he want off the edge of the road? Enough with the “what if” though, Kruijswijk will be replaying all this and as of pixel time he’s on his way to hospital for an X-ray (the Giro’s X-ray truck has stayed behind in Italy), hopefully he can continue. Ilnur Zakarin meanwhile is out of the race, he crashed as well and could not get going again but his performance so far seems to have convinced Russian backers to keep Katusha on the road, possibly via a merger with Gazprom-Rusvelo.

Kruijswijk was left with one of those Richard III moments, “a bike, a bike, my kingdom for a bike” as it took an age to get him a replacement ride and he had no help. Should the others have waited? The problem with unwritten rules is that they’re unwritten. There’s no PDF to refer to and the case law isn’t that strong either. Should they have waited for Kruijswijk? Normally the convention is to wait if someone has a mechanical that’s not their fault and often in a soft moment of the race, for example if the race leader has a problem during the middle of a sprint stage then everyone is happy to wait and regroup. But Kruijswijk fell because of a handling error and then had to change his bike, this was what’s termed as a racing incident. Another factor in this is Kruijswijk himself, he’s been riding strongly but hasn’t imposed himself on the peloton psychologically, he is not senior to Nibali or Valverde in the peloton pecking order. In other words the unwritten rule is applied subjectively, it depends who is involved.

Kruijswijk was further undone by the lack of a team mate or two. Lotto-Jumbo didn’t send anyone up the road in a relay move and they couldn’t have anyone alongside him on the Agnello so when trouble came he was lacking this insurance policy. It’s another cruelty, he rides for a smaller budget team so can’t expect the kind of support that Astana, Movistar or Sky can supply. Still Kruijswijk would have needed some major help, two team mates at least to staff the chase in order to leave him  finish where he could have limited his losses.

On the long chase Maxime Monfort got away, the lieutenant prefers service rather than leadership but deserves a big win sometime but it wasn’t to be today as Astana led the chase and caught him. Nibali was out to gain as much time on everyone with Alejandro Valverde chasing. Steven Kruijswijk’s shoulders told the story, they sagged and his head bowed. He’s from Nuenen, the same town as Vincent Van Gogh. It’s said that when he was depressed Van Gogh would paint his shoes, now Kruijswijk’s head was bowed and he seemed to be looking at his shoes as he pedalled up to Risoul.

Ahead Nibali attacked twice and cracked Chaves. The pedal stroke still looked heavy, this was not the fluent Nibali Risoul had seen in 2014 but it was good enough for the stage win. Chaves perhaps let reason get the better of him and paced himself to the line knowing the maglia rosa was waiting. Chaves is now the seventh rider to lead the race. Will there be an eighth leader tomorrow? Astana are in with a shot now given Chaves only leads by 44 seconds and he too cannot count on the same team support. The Agnello is huge but tomorrow’s stage is arguably harder, it climbs a severe mountain pass right from the start. 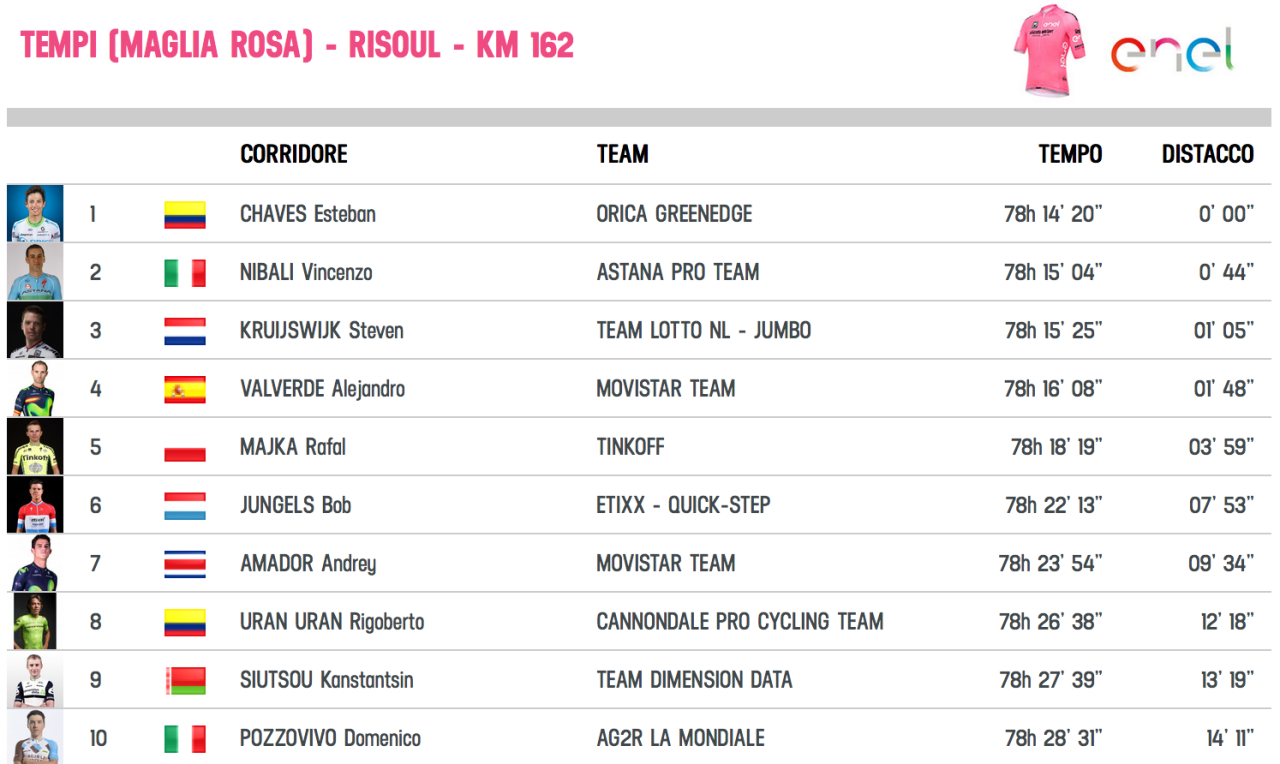