The race reaches its high point the the mighty, gruelling Colle dell’Agnello and then a long descent and the summit finish to Risoul in France. After months of fears and doubt the weather looks fine so the roads are open for two days to test Stevie “Wonder” Kruijswijk. 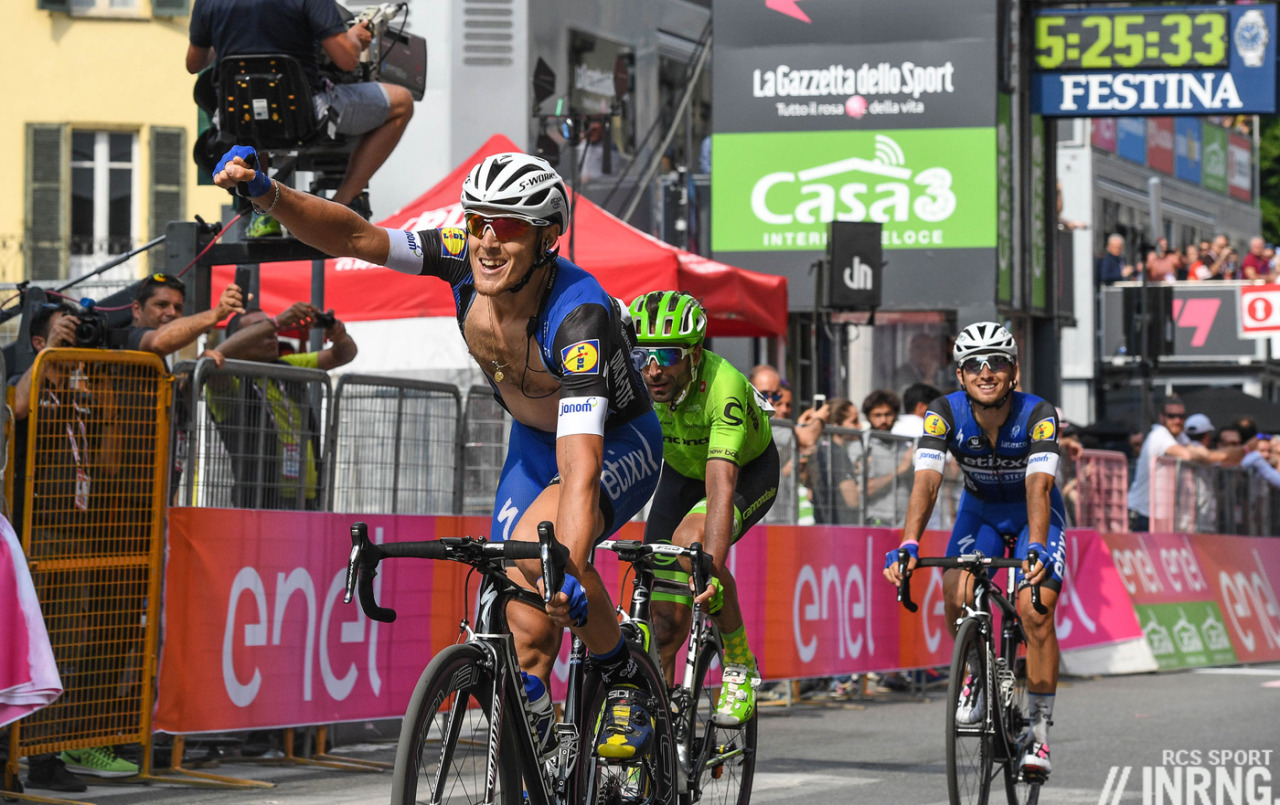 Stage 18 review: a maxi-breakaway of 24 riders built up enough time to stay away and on the big climb of Pramartino Moreno Moser and Gianluca Brambilla got away and stayed away. Or at least they were going to but reached Pinerolo with only slender lead ahead of four chasers including Brambilla’s Etixx-Quickstep team mate Matteo Trentin. This meant Moser had to work harder and Trentin was fresher for the finish. As Brambilla and Moser prepared for the sprint Trentin surged past on the line. It’s another for Etixx-Quickstep and a solid win for Trentin who is picking off big wins in clever ways. Moreno Moser got done over, on paper he’d be the better sprinter, but if you wonder whether Brambilla was disappointed jusy look at his beaming face above. Behind the GC riders came in together and fought hard on the descent and the sprint for no gain, just the chance to test each other.

The Route: it looks like the mountain climbs from the start but it’s not so bad, the race rides up the Variata valley where the river gradually turns whiter as the slope picks up but it still takes the best part of 50km to gain 900 metres in altitude, a gentle slope but tiring still. The valley closes in after Sampeyre and then a short series of hairpins marks the point where the climbing starts, not far before the town of Casteldelfino and the “official” start to the climb.

The Colle dell’Agnello (“Lamb Pass”) is not as bucolic or gentle as the name invites, this is an Alpine monster, a gruelling slog. The early road drags up in long straight lines for five kilometres before a giant artificial lake and a flat section to Pontechianale. Once out of the village it continues to drag on and on, this is not something that winds up the valley, it just runs up it parallel to the small river. There are few hairpins and this isn’t anecdotal, it means it’s harder to get away, anyone taking twenty seconds can’t get out sight but remain very visible on these long straights. With just under 10km to go the first hairpins appear and this marks the start of the hard climbing and by now the race is above 2,000m.

2000, 2400, 2700 metres, these numbers can seem as meaningless as astronomical measurements or economic data but it matters, the higher the riders go the harder things get. Even small accelerations mean oxygen debt with it a stinging interest rate. So it’s less prone to big attacks but the flipside of this is that a rider struggling to hold the wheels can find themselves blown away if they stand on the pedals out of a hairpin bend.

At the top there’s still 55km to go. The descent is similar to the climb, there’s a steep for the first seven kilometres and then the slope eases, riders have to pedal. There are some short uphill sections on the way too as they reach the Quéyras region.

The Finish: 12.9km at 6.9%, a typical French ski station summit finish. It’s been new to the Tour de France but used before in the Dauphiné and Tour de l’Avenir (Nairo Quintana won the summit finish and the mountain time trial there). It’s wide and level and the changes in gradient can be seen from afar. It’s uphill all the way to the line. 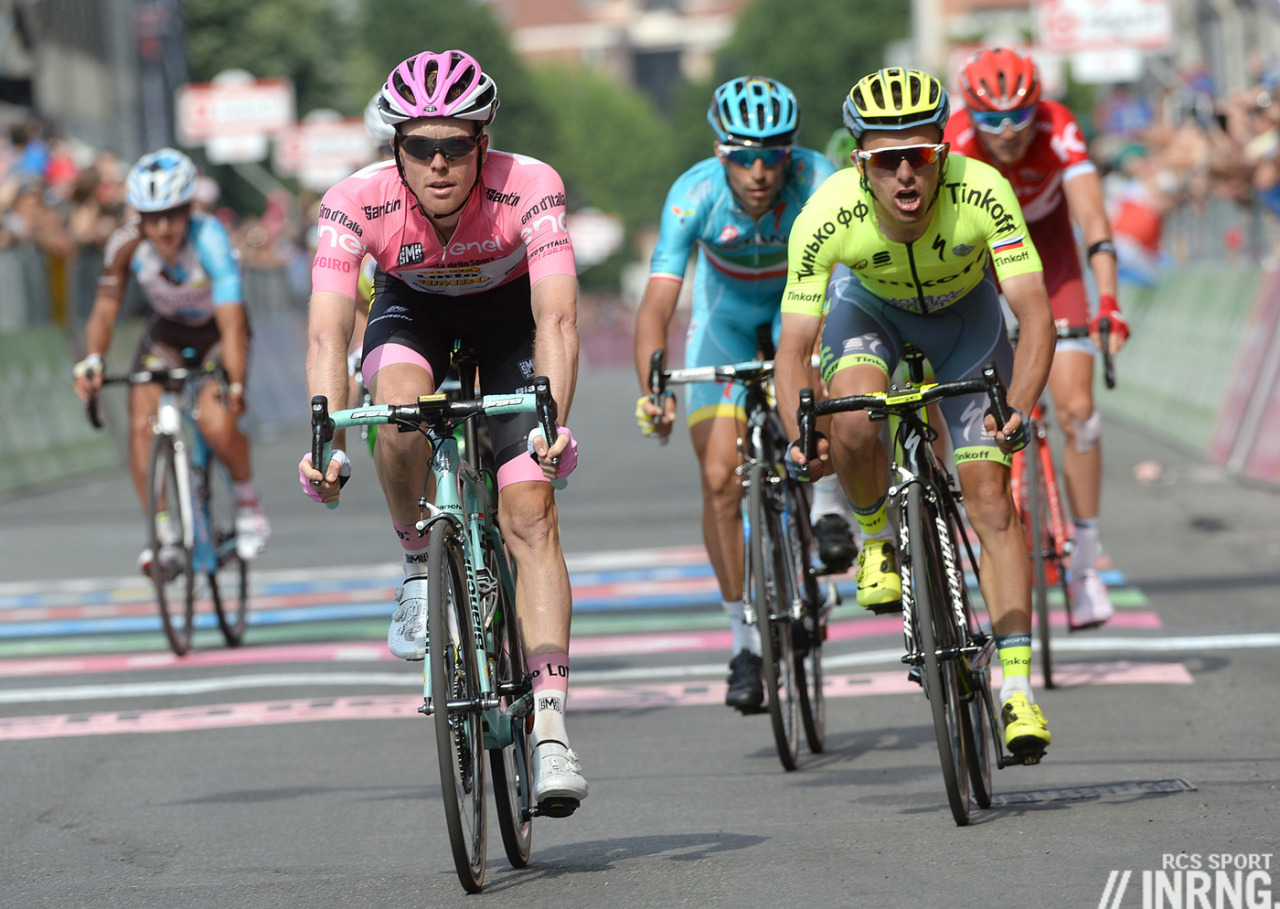 The Contenders: Steven Kruijswijk says he wants to win a stage but will he risk it today? The finish suits him, a long steady climb without many traps, he can cover the moves and once the group is thinned down, strike. But he may not want to be countered, why risk anything? That’s assuming he’s there in the mix. He covered the moves in the Dolomites but he could be without team mates if Astana and Movistar get to work on the Agnello and will find it hard to cover every move especially with the long descent and flat valley sections. It’s one thing to be strong on the climbs but chasing rivals on the flat valley roads is hard. His hope is that his rivals will mark each other too, if Valverde goes then Nibali will chase and so on.

Esteban Chaves has the explosive finish to take the stage but will he go all out to take time? It’s hard to see how he does it, he’d never take three minutes on Kruijswijk on the climb to Risoul unless the Dutchman implodes and surely an attack on the Agnello would be foolhardy. So he might pounce late on the final climb for the stage win and Kruijswijk can even afford to let El Chavito take a few seconds.

Can Alejandro Valverde cope with the high altitude? He suffered in the Dolomites but was this his jours sans or a recurrent problem when the race goes beyond 2000m? If he can factor again then Movistar will get to work thinning the field.

Ilnur Zakarin seems to be climbing well again, his Chianti fiasco behind him but a stage win seems hard, he’d be more interested in distancing Nibali and Valverde if possible to get closer to the podium.

Rafał Majka won the last time he raced here when he took a stage of the 2014 Tour de France. It’s a good climb but like Nibali he seems short of form, following the wheels and at times being dropped. Today’s climbs suit him more, he’s a diesel style of climber.

Among the breakaway picks  Joe Dombrowski‘s been looking good and Cannondale need to salvage something after their GC hopes vanished and Moser’s mugging. Will he pick today with the Cima Coppi or tomorrow with the roads he knows so well from countless altitude training camps at Isola 2000? Mikel Nieve can win again and yesterday Tim Wellens came in last, was he coasting as much as possible to save himself? Georg Preidler‘s having a solid Giro but this is a big ask, the long uphill climb is not ideal.

Weather: sunny in the valleys with a pleasant 24°C. Cooler at altitude and if the Agnello has banks of snow at the top it’ll be melting fast.

TV: the finish is forecast for 5.15pm Euro time and the Agnello is topped at 3.4pm.