Fernando Gaviria must count as a revelation, we knew he was good but not this good and it’s the breadth of his abilities and the manner of his wins that has impressed in a short space of time. We’ve known for over a year that he’s been capable of beating the best sprinters and shining on the track but now we saw him coming close in Milan-Sanremo after 300km. Close is one thing and winning another but Gaviria hasn’t just had a placing or two, he’s won a rainbow jersey on the track and if you think that’s a backwater he also too an impressive win in Tirreno-Adriatico; compare this to the results of Elia Viviani, Mark Cavendish or Thomas Boudat and the other pros who tried to match him on the track. One of this blog’s “neo pros to watch” for the year he’s proving to be more than sprinter, he’s got a powerful long finish and more than ever he looks capable of taking a prologue win someday too. He still looks out of place at Etixx-Quickstep, a Latin rider in this most Belgian of teams, a banana amid a box of turnips, cabbages, and potatoes. Etixx-Quickstep had another hit with Petr Vakoč. He’s a third year pro who first became famous for winning a stage of the Tour of Poland on a day when the wind ravaged the race and blew trees and other debris all over the road but this couldn’t stop the Czech powerhouse. His second year was quieter but he had a stage in the Tour of Britain but this spring he moved up a gear with back to back wins in the Ardèche weekend and then demolished the field in the Brabantse Pijl and enjoyed a that arguably surpassed expectations in a way that his countryman Zdeněk Štybar didn’t. He’s making a name for himself faster than some can pronounce his name right: it’s not “Va-cock”, nor “Va-kots” but try “Va-kotch” and you’ll be close. As Michał Kwiatkowski shows you can become world champion and people will still mangle your name. Loïc Vliegen wasn’t the talk of the town until he made the headlines of sort after he and Philippe Gilbert got into a spat with some people in a car that left Gilbert with a broken finger and a pending court case. Back to the racing and the 22 year old neo-pro with BMC Racing has had a great start to his pro career. Fourth in Le Samyn and ninth in the Amstel show what he can do and people are bound to start making comparisons with Philippe Gilbert given Vliegen’s a young Wallon from just outside Liège – it was just a short freewheel from the finish of Liège-Bastogne-Liège to a hot bath at the family home. He’ll be worth watching throughout the summer too because he’s a punchy climber with a light build but being on BMC Racing might mean team duties come first. It’s all the more impressive given he had heart surgery last winter to work on a long-standing defect but that didn’t harm a strong set of results in the amateur ranks last year. Katusha’s towering Nils Politt, a visible presence in several races and at first it looked like he signed for Katusha because of his connection to bike sponsor Canyon given relatively sparse results in the amateur ranks, the reigning U23 German champion and a time trial specialist but not necessarily a must-have rider for a Russian team scouting for talent even if he had a string of solid results on the track and in the time trials. He’s from a cycling family in Hürth just outside Cologne and the same town that’s been adopted by André Greipel. Politt took out his first racing licence aged nine. His price will have shot up now. The same for Etixx-Quickstep’s Łukasz Wiśniowski who showed his power at times and he looks set to be a valuable helper. If Politt had a Canyon connection then earlier this year I wondered if Gianni Moscon joined Team Sky thanks to the Pinarello connection as he’s from the Trentino region and rode a Pinarello for the U23 Zalf team. He’s been one of Italy’s best amateurs for the last two years but was he going to get lost in Sky? No and he was visible during a lot of the classics including Paris-Roubaix where he might have been spotted crashing out – Moscoff -but that was only because he was in the front with his colleagues like Ian Stannard and Luke Rowe, an impressive performance for a 21 year old. He turned 22 last week.

Mads Petersen is one to watch for the future. While on a reduced programme with Team Stölting and winning races like the U23 Gent-Wevelgem the 20 year old Dane mixed it with the top pros in the Three Days of De Panne where he was eighth overall.

Jasper Stuyven‘s no revelation given he’s been one of those “The Next Boonen” riders for a while but finally he made the breakthrough in Kuurne-Brussels-Kuurne to thwart the sprinters. It was a powerful ride. But is he going to be a classics contender or a valuable lieutenant now that Fabian Cancellara has retired?

Alexis Gougeard‘s been tipped on here for some time and won a stage of the Vuelta last year but probably appeared on more peoples’ radars thanks to his fifth place in the Omloop Het Nieuwsblad, the sole survivor of the early breakaway he managed to latch onto the winning breakaway, an impressive effort. But part of his problem too because he attacks early because he doesn’t like fighting for position and the game of chicken involved when the peloton speeds into a farmtrack at 60km/h. Ag2r La Mondiale seem fine with this and are happy to let him develop over time and he looks like a breakaway specialist for all seasons rather than the cobbled classics, he won a stage of the Vuelta after all. Alexey Lutsenko deserves a mention too. He won a stage of Paris-Nice but featured in the classics too with 14th place in the Tour of Flanders and third overall in the Three Days of De Panne all while 23 years old. But a revelation? We saw him take a stage of the Tour de Suisse last year. Katusha’s Viacheslav Kuznetsov has long been a strong rider, a powerful unit in Alexander Kristoff’s sprint train who specialises in sheltering his team leader into the final kilometre. But he struck out on his own when the Norwegian was going through a bad spell and got third place in Gent-Wevelgem.

Gent-Wevelgem was overshadowed by the death of Antoine Demoitié but Wanty-Groupe Gobert kept riding and Dimitri Claeys made the top-10 in the Tour of Flanders, arguably the 28 year old’s best result. A real journeyman pro he’s started off in the Continental ranks, made it to Pro Conti and then dropped back to the amateurs before turning pro again.

Claeys was dropped by the NetApp team which signed Scott Thwaites and has now become Bora-Argon 18. The Briton was often visible at times in the classics and was a creditable 20th in the Tour of Flanders and had three top-10 results including second place in Le Samyn. He’s 26 so no hot prospect for the future, this seems to be more tale of gradual improvement. 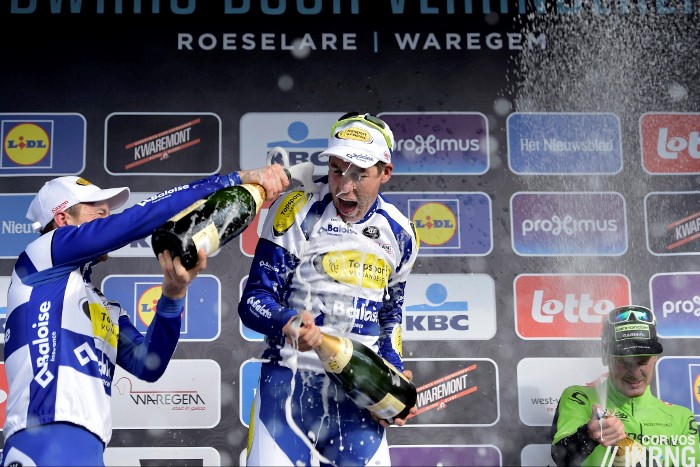 Dylan Van Baarle had a great Tour of Flanders giving us a rare sighting of the Cannondale kit but this was more confirmation than revelation after a podium in last year’s Dwars Door Vlaanderen (pictured) which got him on last year’s revelations review and the best young rider in the Bayern Rundfahrt as well as winning the Tour of Britain outright in 2014.

Edward Theuns had a good spring for Trek-Segafredo but with worse results than last year. This is because he’s been on duty for his team rather than having the freedom he enjoyed last year at Topsport Vlaanderen-Baloise.

This brings us to the Belgian development team who haven’t supplied the breakthrough rider that gets the big teams waving wads of cash. Stijn Steels won the 1.2 GP de Lilliers, Floris de Tier looked strong in the Ardennes, Amaury Capiot and Pieter Vanspeybrouck had their moments in the sprints but it’s been a quieter spring, a year ago Theuns and Jelle Wallays were beating the World Tour riders.

Finally Imanol Erviti made a name for himself but he’s won two stages of the Vuelta a España already and is 32. Perhaps the revelation here is that he’s well suited to the northern classics.

Summary
I’d been looking forward this piece for a while, a chance to recap the classics and put a spotlight on some new riders only the more the races went on the harder it got to spot the star picks of the future. There were no stunning breakthroughs this year but plenty of solid performances by neo-pros and others but plenty and perhaps too many of the names mentioned above are not revelations, they’re more confirmations. Gaviria looks set to be a superstar and Vliegen’s limits have yet to be defined while Politt and Wiśniowski are names to file away for Paris-Roubaix in 2020. Perhaps the biggest revelations this season have been far away from the pavé and bergs of Belgium but are to be found in the stage races? Androni Giocattoli’s 19 year old Colombian mountain biker Egan Bernal has had an excellent start to his pro career and is already making the legs of the best climbers hurt and all this with little experience of road racing. With reported VO2 Max of 88.8 he’s locked into a four year contract with Gianni Savio although we can easily imagine the Italian team manager cashing in for the right price.

If Team Sky are beginning to think about life after Froome then his body double Hugh Carthy looks the obvious choice. The lanky Brit rides for Caja Rural and joined the Spanish team so he could move to Pamplona and put his climbing legs to good use and has had some good results, notably a top-10 ride in the Volta a Catalunya. His contract’s up and it’ll be interesting to see what follows next.