The last of the spring classics, Liège-Bastogne-Liège is a race of transition. Part Belgian classic, part-mountain stage and a rare chance to see the grand tour specialists go all-in for one day over a tough course. There are ten marked climbs, countless more rises and a new cobbled climb right before the finish.

Alejandro Valverde is the obvious pick as he hopes to double-up his Flèche Wallonne win but this is a harder race to control and bad weather could make the race wilder still. Here’s the usual preview with the route, contenders, ratings, TV times and more.

The Route: 253km plus the 5km neutralised roll-out. It’s 107km to Bastogne with one categorised climb, the Côte de La Roche-en-Ardenne but plenty of rolling roads and extra climbing. Things get serious after the Côte de Wanne with 84km to go as the fight for position becoming ever-more vital and the climbs come thick and fast.

La Redoute is the big strategic rendez-vous, a very awkward road to ride with a gradient that keeps changing and the Walloon version of the Koppenberg or Kapelmuur, painted with PHIL, PHIL, PHIL in tribute to local hero Philippe Gilbert who won’t be riding.

The Côte de La Roche-aux-Faucons is next, it’s not a classic climb only appearing in 2008 but very selective. Finally there’s the suburban Côte de Saint-Nicolas as the penultimate climb before the finish.

All these climbs are the obvious strategic points but they’re almost the easy part in that they represent defined points with signposted beginnings and endings. Yet there are dangers everywhere, the descents and narrow roads can catch a rider out. Experience counts for plenty as many of these climbs are followed by an open section across a plateau or worse, a false flat. It’s here that moves often go clear. If anything the marked climbs are the obvious parts, the rest of the course is very technical. Take the Côte de La Roche-aux-Faucons which looks small on the profile above but it drags on beaucoup and the climb after the “summit” is just one of the many hidden climbs of Liège-Bastogne-Liège.

The Finish: after many scenic climbs with woodland the race swoops into to Belgium’s rust belt and its decaying steel mills. Deceptively the finish isn’t in Liège but five kilometres away in Ans, an unremarkable suburb. New for 2016 the Rue Naniot, a cobbled residential street introduced to shake up the finish with 2.5km to go and it’s 10% average. Here’s a screengrab from Google’s Streetview:

After a brief descent on a wide tarmac road with sweeping bends the race returns to the familiar long climb to the finish line and it’s regular in gradient and wide, a suburban road rather than a rural lane. Riders climb together, often watching each other before the road flattens and turns left with 250 metres to go and the sprint for the line begins.

The Scenario: a gradual process of elimination will see riders ejected along the way. Things get serious in the final 50km but in recent years a sizeable group has arrived in the suburbs of Liège and the more riders, the harder it’s been for some to slip away given the chasing power available. This Sunday’s forecast for poor weather should make things harder still with more riders prone to cracking late on if they get a chill or don’t eat enough, it’ll add more variability to the final hour. Got that déjà vu feeling? Alejandro Valverde returns after winning the Flèche Wallonne, exactly as he did a year ago on his way to the win in Liège-Bastogne-Liège. He’s got the form, he’s got the experience and if he wins he’ll join Moreno Argentin as the second most successful rider in this race after, of course, Merckx. He’s got a strong team backing him which we saw control the Flèche Wallonne but they’ll have to race differently here, the added climbing and extra distance means this is a harder race to put under lock down and if Valverde was almost a certainty last Wednesday he’s less of a certain pick this time. Ion Izagirre and Giovanni Visconti could be there in the finish and offer extra cards to play. Etixx-Quickstep have the twin attack of Dan Martin and Julian Alaphilippe. Martin has won this race already and would have been on the podium in 2014 had he not crashed out on the final corner and packs a stronger sprint than his stick build might suggest. Alaphilippe is an even stronger sprinter to win from a small group in the finish and his form is looking excellent after re-emerging in the Amstel and confirming his abilities in the Flèche Wallonne. It’s hard to pick between the two, Martin has experience but is the form there while Alaphilippe has the faster finish and his compact build is perhaps better suited to the cold. It’ll be interesting to see how the two work together too and they lose a valuable helper in Gianluca Brambilla, a late withdrawal. 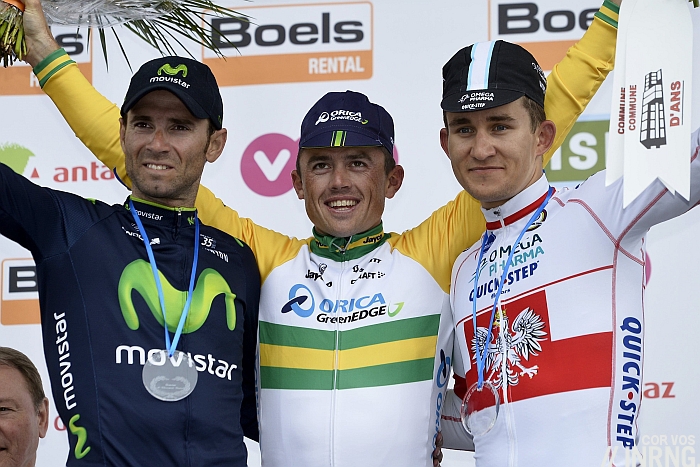 Another classics campaign ends and the last chance this spring to get that Monument classic win craved by Team Sky. Michał Kwiatkowski is never the certain pick. A top tip for the Amstel he had a wardrobe malfunction and got iced by the sudden downpour in the race. The form should still be there and he’s been on the podium in this race too. Chris Froome rides but has never featured in the front group of this race and the grim conditions seem unlikely to encourage him to suck in lungfuls of icy air for seven hours, instead Wout Poels is probably their best back up. Romain Bardet is coming into form after a training block and likes this race. He’s had steady progress in the event since turning pro and will aim to improve on his sixth place last year. However if he’s riding well in the Giro del Trentino he’s not looked so zippy, citing training camp fatigue. Ag2r La Mondiale come with a strong team. Domenico Pozzovivo has been in the front group in the last two years coming into Liège and in form again ahead of the Giro. Jean-Christophe Péraud is beginning to purr, saying he’s finally starting to rediscover the form that carried him through 2014 while Jan Bakelants, Cyril Gauthier and Mikaël Cherel can all offer extra support in the closing stages. As repeated a lot here Rui Costa seems to show in well in the Ardennes but rarely wins and more of the same seems likely. However this course probably suits him best, he can grind out a winner and his slight outsider status might give him more room, the chance to slip away and if others hesitate he’s very hard to pull back. Diego Ulissi was seventh in the Amstel Gold Race, eighth in La Flèche and a good candidate for a top-10 again. Louis Meintjes is coming back into form too. Simon Gerrans won in 2014 thanks to a textbook display of economical riding, more impressive for its technical execution than its flair. Now he’ll hope for more of the same as he returns in good form, 11th in the Amstel Gold Race and as Orica-Greenedge’s sole leader. He’s got a good record of targeting races and succeeding. Michael Albasini, Daryl Impey and the Yates brothers could be outsiders but it’s likely to be all in for Gerrans.

Vincenzo Nibali returns to a race that haunts him after he lost out to Maxim Iglinskiy in 2012. As much as he’d like to win here is the form there? He was dropped in the mountains of Trentino this week and the road was not even that steep while Jacob Fuglsang and Tanel Kangert didn’t wait for him leaving Nibali to try and wave the TV camera away as it lingered on his isolation. Maybe it’s just fatigue from training, like Bardet. The Sicilian can turn the tables around and has the ability to liven up a race once he puts his mind to it. Warren Barguil is back in form and this race is made for him. Still 24 this is a learning experience but Alaphilippe shows any apprenticeship needn’t last long. An outsider he was ninth on the Mur de Huy and is Giant-Alpecin’s leader. Include the Brabantse Pijl and Enrico Gasparotto has finished now lower than fifth in the “Ardennes” races so far. A win? He’ll surely be marked now but given he’s back to his pomp the finish suits him well.

As predicted for Wednesday Joaquim Rodriguez isn’t shining as brightly this year as shown by the way he had to attack on the Mur de Huy rather than confidently bide his time. Don’t rule him out for Sunday though, this race suits him more than most and if he’s looking less sharp he’s close to the front and made the podium last year. Is Tim Wellens agoraphobic? He certainly loves trying to escape the crowded peloton. So far it’s looked folorn and desperate although it’s cheered TV producers desperately willing for some action. But like all attackers there comes a day when it works, when the move sticks and this is how Wellens won the Eneco Tour last year, in the Ardennes too. Jelle Vanenedert and Tony Gallopin should be around too.

Finally a quick tour of the other names. BMC leave out Philippe Gilbert and bring in Richie Porte but their best chances probably hang on Samuel Sanchez, sixth on the Mur de Huy and still battling on aged 38. Floris de Tier is riding well for Topsport Vlaanderen, Arnold Jeannesson and Daniel Navarro lead for Cofidis, Serge Pauwels and Kanstantsin Siutsou could feature for Dimension Data. Cannondale’s Michael Woods was just outside the top-10 on Wednesday but this Sunday requires more experience and craft so watch to see how far he can stay with the top riders. Trek-Segafredo’s Bauke Mollema is suited to a race like this and so is fellow Dutchman Robert Gesink at Lotto-Jumbo but if a genie emerged on Sunday morning offering them, say, eighth place would they sign up? Probably. Roman Kreuziger has been visible recently but yet to crack the top-10 in the Ardennes so he should be close as he battles with the race and hypothyroidism condition while Tinkoff also bring Rafał Majka for his first race this month.

Weather: there’s been talk of snow for Sunday, conjuring up images of Bernard Hinault’s 1980 ride. However the forecast is for sleet and rain, little better for the riders. Currently the prediction is a dry but cold start before the clouds come in, bringing in showers, sleet and mist atop the climbs. A top temperature of just 7°C.

TV: the race starts at 10.30am Euro time, local TV coverage starts at 2.05pm and the finish is forecast for 4.45pm. It’s an ASO race so notionally available on the same channel you watch the Tour de France. If not there’s Eurosport… and you’ll find more options over at cyclingfans.com, cyclinghub.tv and steephill.tv.