The UCI has confirmed there was a concealed motor found in controls on one of the bikes in the pits belonging to Belgian U23 rider Femke Van den Driessche. She is proclaiming her innocence saying the bicycle belonged to a friend who dropped it off at the pits but as we’ll see below, the backstory does not matter when it comes to the UCI rules as rider and team alike are responsible for ensuring they have a compliant bicycle.

Today’s L’Equipe writes that the UCI has a new way of detecting motors: an electromagnetic field detector, although it the newspaper’s piece is carefully written and the new method may not have found the motor yesterday. Reports on Belgian TV’s Sporza say cables were found down the seat tube – note Van den Driessche does not use electronic gears so it wasn’t the battery pack – and that it was not possible to remove the cranks as normal from the bike. 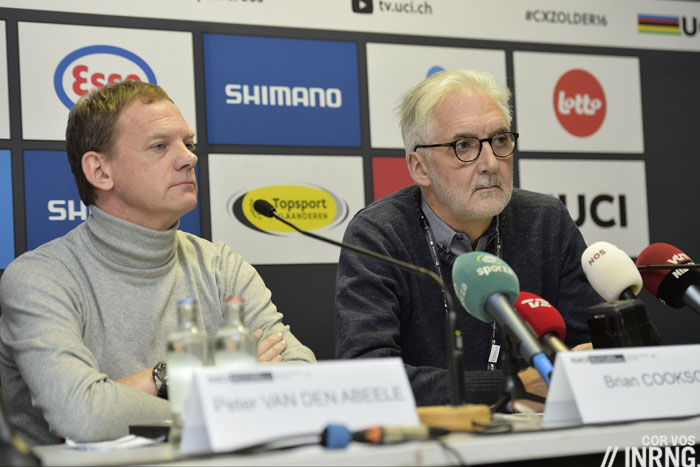 After a battery of tests, this morning the UCI President Brian Cookson and Peter van den Abeele, the UCI’s “Head of Off-road” confirmed verbally in a press conference on the margins of the Zolder course that “it was a concealed motor” before adding they could not say much more as the case will go to a hearing.

For now things are at a provisional stage. The rider concerned, Femke Van den Driessche (Belgian junior champion in 2011, reigning European U23 champion), denies cheating saying the bike belonged to a friend who trains with her and was brought to the pits. Of course this raises the question of who the “friend” is and what they’ve got to say about it.

What next?
The case goes to the UCI’s Disciplinary Commission which is the body in charge of imposing sanctions for breaches of the UCI Regulations. A panel of up to three members plus the Chair will examine the case. After an initial review normally they’ll call the accused to a hearing, normally in the UCI’s headquarters in Aigle, Switzerland but it can be done in Belgium too. The commission doesn’t need a unanimous verdict, a majority is sufficient. The UCI’s verdict can appealed at the Court of Arbitration for Sport.

The rules
For years the idea of a motor seemed improbable and punishment fell under the same general rules about using an approved bicycle and completing the course under your own steam, for example not taking a train as happened a century ago, or holding onto the team car as can happen today.

Now there are new rules under the vague term of “technological fraud”. Here’s a screengrab of the rule (my emphasis): 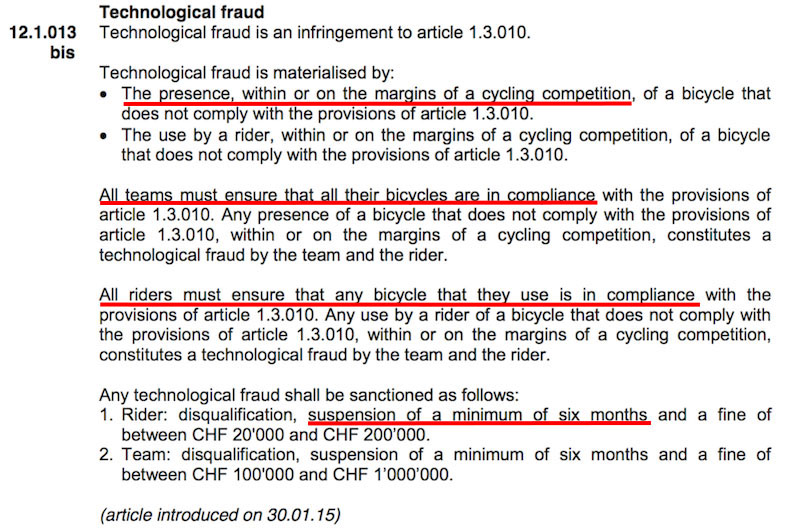 Like many of the UCI rules it’s not very well drafted. “Technological fraud” is defined as a non-compliant bicycle when it comes to propulsion and everyone knows 12.1.013 is “the motor rule”. It’s worth noting the emphasised points underlined in red:

Conspiracy theory: some have said the UCI have caught a small fish in order to warn off the others. I think this credits too much political craft to the UCI.

Summary
The UCI has found a motor for the first time. This has been a saga over the years with bikes being scanned by X-ray before a prologue or disassembled after a mountain stage. We got a collection of conspiracy videos featuring furtive bike changes and spinning wheels and a lot of whispers. Nothing had ever been found but this was the story that would never die. That’s how conspiracy theories work: a lack of evidence only signals to some that there’s a clever cover-up. Now it’s real and shocking.

There’s now a disciplinary procedure in place which will weigh up the evidence and deliver a verdict, probably within weeks. Crucially the “technological fraud” rule imposes strict liability on the rider and team: it doesn’t matter how the bike or motor got there nor even whether it was used in the race.

Would anyone now be daft enough to use this in a race? You’d hope not but some imbeciles start races with easily-detectable EPO and steroids coursing through their veins so this weekend’s news might be the first case but not the last.