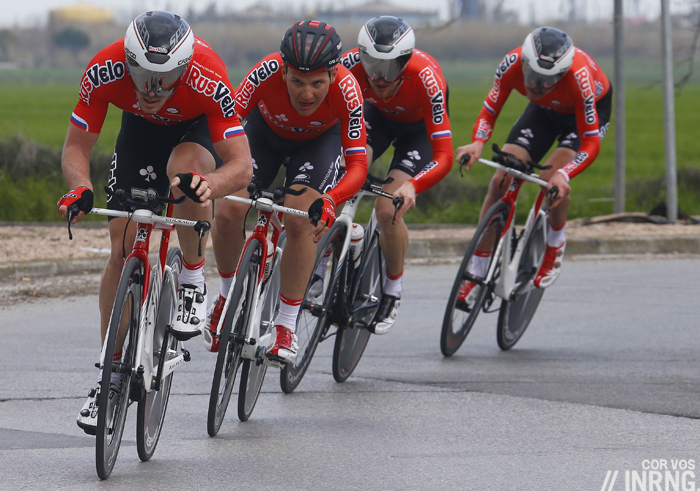 What was it about the team sponsored by a $40 billion company that attracted RCS to give Gazprom-Rusvelo a wildcard for the Giro? You probably can’t name a rider on the Russian team and if you could you’d know they’re not exactly “must have” riders that the Giro needs to send ratings soaring. So the invitation is a surprise. It’s probably down to money but the real concern is collusion between this team and Katusha as both share the same DNA.

Scan Rusvelo’s results in recent years and there’s little to suggest they’ll do much in May. Thanks to Ivan Savitsky they won a single HC-rated race last year, a stage of the Tour of Quinghai Lake. Identical in 2014, only with comeback-kid Timofey Kritskiy instead. Otherwise the team specialise in riding Russian races and tend to win many, if not most of the domestic UCI races such as the GP Sochi stage race and one day events like Krasnodar-Anapa. Since then there haven’t been any big transfers, they managed to reel in the promising Alexey Rybalkin who was a good U23 rider last year but still too raw for the Giro.

We can’t see this as a way to develop the Giro in Russia either, a means to crack a new market. There’s already Katusha and Tinkoff for that, they bring heightened Russia media interest and the best Russian riders, there’s no need for third team.

Of course Nippo-Vini Fantini aren’t a must have team either but they’re Italian and this matters. Races remain parochial, global events that need locals. People will come to see the village champion ride past. Italian cycling is down to Lampre-Merida, although Astana has an Italian cell within in it. It’s why Direct Energie are certain wildcard pick for the Tour de France and Caja Rural get a Vuelta a España invitación. Note the Dutch start to the race, Roompot got overlooked too although their sporting record isn’t compelling either. We should note Gazprom-Rusvelo have some Italian links: Ernesto Colnago, Valentino Campagnolo and Italian cycling boss Renato di Rocco all attended the team launch last December and the team has a base in Italy. As well as the invitation there’s the exclusion. Last year the wildcards struggled, Nicola Boem won for Bardiani-CSF after the team started under a cloud following the low cortisol levels of a rider and eventually quitting the MPCC; meanwhile the other wildcards didn’t win anything but at least they tried by getting in breakaways. But if they weren’t good enough then then the answer is to invite a stronger team like Bora-Argon 18, Cofidis or Caja Rural, not a weaker one. Androni-Sidermec are the big losers here, even if their roster looks past its sell by date it’s still molto Italian. Gianni Savio’s team have the dubious privilege of being suspended by the UCI last summer, the first collective suspension ever imposed under the new rules. Did this cost them? Probably not because RCS can’t play the clean card while inviting Southeast who have had EPO positives for Di Luca, Santambrogio, Carretero and Rabbotini of late. Rusvelo were the first team to self-suspend under the MPCC rules. Of course it’s possible Gazprom-Rusvelo ride thanks to a fistful of Euros. The going rate for a Giro wildcard could be a few hundred thousand Euros, something that’d be strenuously denied in public but there’s more than a hint of Captain Renault here. Not that anyone’s trousering envelopes of cash, instead it’s all above board and part of a business model. Look around at an RCS race and you’ll see:

It would not be a surprise to see Gazprom or Colnago sponsoring the Giro with banners or perhaps a jersey in the race. Hopefully none of this is shocking, just a reminder of the commercial motor beneath the sport’s bonnet.

If you’re really into your Kremlinology then you’ll notice here’s a team linked to UCI Management Committee member Igor Makarov that’s close to RCS and you could view this in the light of the spat with ASO and how the UCI, RCS and Velon are all riding in the same echelon. This is probably a step too far.

However the connection to Igor Makarov does matter, he’s the man behind the Gazprom-Rusvelo team. Here’s the team website:

“The Castle of Desanzano was the venue of the team launch for Gazprom-RusVelo professional cycling team this weekend. The team is the brainchild of Russian cycling federation president Igor Makarov who has been giving it all the necessary support over a period of four years. The arrival of the new title sponsor in 2016 was announced at the beginning of the ceremony, giving the team the new official name of Gazprom-RusVelo”
– Gazprom-Rusvelo team website, 29 November 2015

The Russian oligarch owns the Katusha team too. There is a rule that prohibits connected teams from racing together in order to prevent a conflict of interest. Here it is:

2.2.001 Riders belonging to teams with the same paying agent or main partner may not compete in the same race except in the case of an individual event. Furthermore, no more than one national team of each nationality may compete in an event. In addition, the participation of both a UCI WorldTeam and the development team supported by this same UCI WorldTeam in accordance with article 2.15.130 is prohibited

The UCI publishes a PDF but has yet to upload the 2016 version. Either way Katusha and Gazprom-Rusvelo do not share the same main partner (ie sponsor) nor the same paying agent, jargon for the person or legal entity behind the team. However as Makarov’s presence at the team launch makes clear, both teams share one ultimate boss, perhaps in spiritual than legal terms but it’s clear who the chief is. Indeed the closeness is seen in other ways, they have their service course warehouses in neighbouring towns next to Lake Garda in Italy. So perhaps the scope of the rules misses it but Gazprom-Rusvelo’s presence in the Giro alongside Katusha poses a potential conflict of interest as Gazprom-Rusvelo riders have an implicit incentive to help Katusha and Ilnur Zakarin’s GC tilt. This is unlikely to be resolved in a hurry given Makarov sits on the UCI’s Management Committee.

Conclusion
Perhaps we won’t miss Androni but Gazprom-Rusvelo’s invitation to the Giro is a surprise. Let’s wish them well, they’ll be expected to enliven the stages with early attacks, indeed finishing could be a challenge given few on the squad have done long stage races. They haven’t won much and neither do they represent a means to crack the Russian market given Katusha and Tinkoff are already mighty Russian teams. It could be money instead with Gazprom or Colnago deciding to sponsor the Giro d’Italia. This shouldn’t be a surprise given the precedent but if it happens it’s obvious.

But whether Gazprom-Rusvelo thrive or if they’ve “paid to play” is speculation. What’s real is the potential for a sporting conflict of interest with two closely-linked teams sharing the same central figure which brings concern about tactical collusion. The scope of the UCI rules doesn’t cover this and perhaps they should.