The Vuelta’s Jerseys and Prizes As well as the general classification with its maillot rojo there are other competitions in the Vuelta a España. Compared to the Tour de France’s complex reverse engineering system for the points competition and its bizarre “beyond categorisation” climbs, the Vuelta is a lot more straightforward.

Here’s a look at the systems and also the sprinters who be in the mix for the green jersey and stage wins.

The points jersey is a familiar green and sponsored by Skoda, just like the Tour de France. But the scale is different than the Tou. Here there are no adjustments for the type of stage, instead it’s:

It’s called the clasificación por puntos but think regularidad instead. John Degenkolb took four stages last year on his way to winning the competition ahead of Alejandro Valverde and Alberto Contador with Michael Matthews the next sprinter in sixth place which shows a sprinter has to be on top of their game. 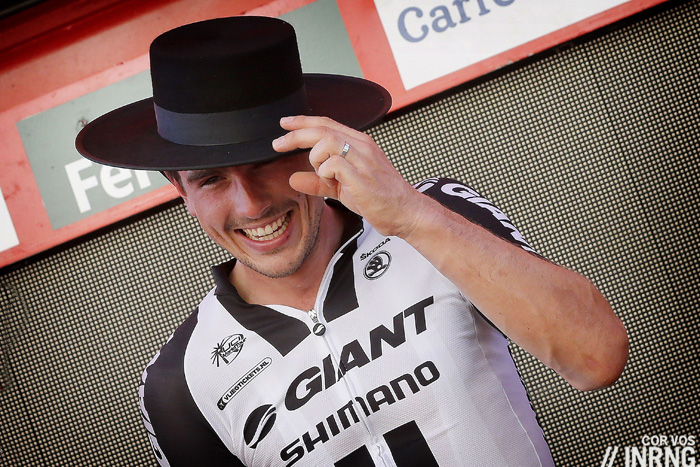 This time with luck we’ll have a contest between sprinters. John Degenkolb (Giant-Alpecin) and Nacer Bouhanni (Cofidis) are the best in the field and versatile too, they can cope with a hill or two in the way. Degenkolb has thrived in this race in years past but partly because it’s been his chance to seize the team leadership, 2015 has been different for him with a successful spring classics campaign before the Tour de France meaning he’s had a lot on his plate already. By contrast Bouhanni, a double stage winner last year, is seized with conquering rage and a desire to make amends for a missed start to the year and then his Tour de France exit, he has momentum with him after recent stage wins in the Tour de l’Ain.

Caleb Ewan (Orica-Greenedge), Kris Boeckmans (Lotto-Soudal) and Matteo Pelucchi (IAM Cycling) are the next level of sprinters. Ewan, just 21, is being asked to do a lot here but he does have the leg speed to win and it’ll be interesting to see what his team do with him, whether he is expected to make it to Madrid. Boeckmans is not a prolific winner but able to take a chance or two while Pelucchi had some good wins in the recent Tour of Poland, he is fast and a touch wild. Others to watch include Reunion island roadster Lorrenzo Manzin (FDJ) who is younger than Ewan; Carlos Barbero (Caja Rural) is a versatile rider, more than a sprinter, a Spanish Sagan if you like; Lampre-Merida usually have several sprinters on tap but only Max Richeze here and the Argentine rider has not won anything for years. Luka Mezgec is Giant-Alpecin’s second sprinter. Movistar bring J-J Rojas and Fran Ventoso but will be they be interested in the rough and tumble of sprint finishes when they’ve got Valverde and Quintana to protect? Kristian Sbaragli (MTN-Qhubeka) has yet to get a big win but often runs close, the same for Tom Van Asbroeck (Lotto-Jumbo) and Danny Van Poppel (Trek Factory Racing).

Degenkolb and Bouhanni will need to amass points to ward off Peter Sagan doing what he does best and scoring on days when they cannot. But nobody knows what form Sagan is in, he could be in serious prep for the Worlds but last year he showed up overweight in Spain. Meanwhile the more Alejandro Valverde goes for GC the less he sprints but he’s good at sniping time bonuses and will take the accompanying points too. 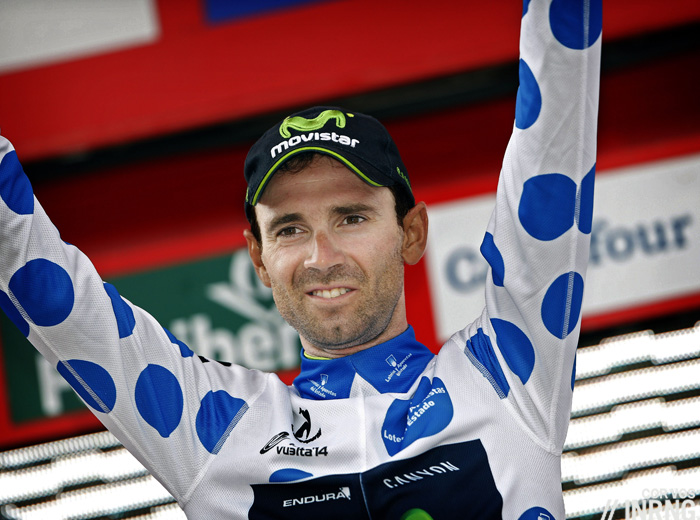 The mountains jersey continues the simple theme with few points available on the climbs. The Alto Ermita de Alba is the Cima Fernandez

The scarcity of points means going on a long raid to rack up points as others have done in the Tour de France is a big ask and since rewards come on the big GC stages it’s likely to correlate closely with the overall classification. However there is always one exception, think L-L Sanchez last year, Nicolas Edet in 2013 and Simon Clarke in 2012 and David Moncoutié again and again. Picking who this might be is the hard part but let’s think of Dani Navarro (Cofidis), Esteban Chaves (Orica-Greenedge), Rodolfo Torres (Colombia), Amets Txurruka (Caja Rural) and Pierre Rolland (Europcar) as the kind of riders who could do it. The wearer gets a polka dot jersey but with blue dots on a white background. It is sponsored by Loterías y Apuestas del Estado, the Spanish state lottery.

The leader of the Combined Classification wears a white jersey. This is awarded to the rider with the best position in all three of the classifications: overall, mountains and points. It is calculated by the ranking in each classification. For example a rider who is 3rd overall, 5th on points and 8th on mountains has 16 points (3+5+8=16) and a rider 9th on GC, 4th on points and 2rd in the mountains has 15 points (9+4+2=15) and the rider with the lowest score wins. Early in the race if a rider is not ranked on all three scales then the best score across two classifications is taken. It is sponsored by Fertibera, an agricultural products company.

Note there’s no best young rider competition and UCI rules limit a stage race to four jerseys to avoid confusing the public with too many in-race competitions. Previous post: Who Will Win The Vuelta a España?