What Athletics Can Learn From Cycling

Yesterday brought news of a leak of blood values of 5,000 track and field athletes from 2001 to 2012 thanks a joint effort by Britain’s Sunday Times newspaper and German TV channel ARD, whose 55 minute show you watch online for yourself.

Glancing at athletics, the sport seems to be in a similar position to where cycling was some time ago, not so much for the news that doping was widespread a decade ago but because of its response to the claims. The head of the IAAF, athletics’ governing body, called the report “a joke” but nobody has seen the funny side. Can cycling’s experience help?

First, that leak. Who or how doesn’t matter, the leak of athletes private data is bad news. Not the “sweep it under the carpet” aspect but because it undermines the trust: if a system cannot keep data securely then it’s not a great system. Now that it’s out there the story is big:

“From the World Championship and Olympic Games in Sydney 2000 medals have been won in at least one of the distance events by an athlete who at some point in their career who had probably engaged in blood doping”
-Michael Ashenden, ARD report

Some cycling fans on Twitter seemed to revel in the news of athletics taking a hit. Perhaps there’s relief that other sports get shown up as well. Only the other day the New York Times ran a piece after obscure cyclists Carlos Oyarzun and Fabio Taborre tested positive for the yet to be approved drug FG-4592 which linked cycling to doping.

The article implies cycling is the sport where participants go for experimental drugs. Only it’s appeared in athletics months ago thanks to race walker Bertrand Moulinet of France so for now cycling still rhymes with doping. We can only imagine the headlines if the blood values of 5,000 cyclists from 2001-2012 had leaked out, that period includes many rotten race results, some we know plenty were achieved by doping because of subsequent arrests, confessions and prosecutions. It’s reasonable to suspect many other race results were corrupted too so cycling and athletics have what you could call a shared past. There are even overlaps, for example Spanish runner Marta Dominguez was apparently a client of Eufemiano Fuentes. As for dodgy passports, it wasn’t long ago that UCI President Brian Cookson went public with the claim that Roman Kreuziger’s bio-passport contained “very serious anomalies“.

The UCI dropped its prosecution of Kreuziger and it’s here that the subtly of the the bio-passport and blood values come into play. Tests for banned substances rely on toxicology, the discovery of the banned substance in a sample: positive or negative.The passport program doesn’t bring this binary certainty. Its software rings an alarm bell if an athlete’s numbers deviate from an established patten. An expert with a background in clinical haematology, sports medicine and/or exercise physiology reviews the data from the system. The expert has four options:

In the event of the fourth option, two more experts are asked to evaluate the data and they can each recommend one of the four options above. All three must review the same data set and only if each concludes that, in the words of WADA’s procedural manuals, “it is highly likely that a prohibited substance or prohibited method had been used and unlikely that it is the result of any other cause” will the case proceed. So three experts must agree and only then is the athlete asked to explain themselves and if the answers are not satisfactory a prosecution begins.

Which brings us back to the athletics, a lot of samples might be suspicious but it’s at the one or two expert view stage now, not the prosecution launch point. According to anti-doping specialist journalist Hans-Joachim Seppelt two thirds of the cases in athletics that looked suspicious were not prosecuted. Why not? Who knows but in cycling it’s said only the slam dunk cases are prosecuted because the UCI and WADA cannot afford to lose a case, because of the financial hit but especially the reptutional and jurisprudential aspect of being seen to lose a case. 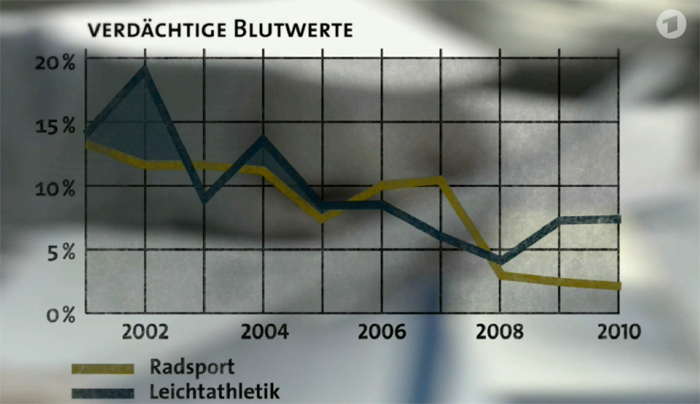 The screengrab above from the ARD documentary shows the percentage of blood values screened that are deemed suspicious per year. Yellow is Radsport or cycling and green is athletics. You can see the yellow line plunge just as the bio-passport comes in to cycling. This is interesting alone for cycling but in the context of athletics the difference is startling; it’d be great to see other aerobic sports like XC skiiing.

“Athletics is 15 years behind cycling”
Anti-doping expert Robin Parisotto – a name familiar to long term readers of cycling news – says in the ARD report that athletics is “15 years behind cycling” which must be crushing if you’re into running in circles. There are similarities to the worst of the UCI practice from the bad old days with the IAAF today. When a test for EPO derivative CERA emerged and several riders were caught in the 2008 Tour de France former UCI President Pat McQuaid turned down retests of samples from that year’s Giro saying rejigging results would make a mockery of the sport. That’s almost the same as saying you don’t want to catch people in case you have to correct the results. Athletics can’t fall into this trap of saying it won’t revisit the past. But compare and contrast:

The good news is that athletics can catch up fast. It’s got a lot more tools at its disposal, especially the passport. Cycling got out of control because the science couldn’t test for a lot of things and there wasn’t the institutional support around, for example we had the Festina scandal long before WADA even existed.

Cycling lessons: can athletics learn much from cycling?
Cycling isn’t in a great place to give lessons but having been dragged kicking and screaming to confront the doping problems there are some similarities:

Summary
The idea of people doping and winning aerobic contests shouldn’t be a surprise to long term followers of cycling, what works for the Tour de France or Milan-Sanremo is equally effective for running 800m or a marathon. The weekend’s report casts a lot of suspicion over the past and there probably were many cheats who got away with it. This suspicion is toxic.

Only athletics isn’t waking up to the problem, it’s prosecuted more runners and race walkers than cycling. But it’s got to be careful with the perception and presentation of this, especially when it comes to the top brass at the IAAF. It’s here that lessons can be learned and ideas imported, whether leadership or institutional matters. Just as cycling can never clean up, the IAAF can only hope to contain the problem but being seen to do this would be a start. With elections looming for the IAAF Presidency, both candidates need some cycling lessons.